Malaysia's 'Crimeocracy' Is Not Fit For Purpose - Commentary

For decades Malaysia has functioned as a sham democracy controlled by a self-serving, contract-skimming, feudalistic elite with an iron grip on power. The evolution of a new more educated generation and the shock of exposures such as 1MDB finally ruptured that grip in 2018, but not entirely.

Instead of fighting their way back through the ballot box the defeated power brokers from the old establishment acted like old men in a hurry, experienced in the art of abuse of power and money, particularly when it comes to overturning undesirable election outcomes.

The ‘Perak’ solution was being talked of almost immediately once Najib stepped down and, following a period of dedicated plotting, the ‘wooing’ over of MPs became sufficient to destabilise the elected government.

With the active involvement by the Agong in blocking the return of Parliament and appointing a minority puppet leader. the establishment re-asserted control and started to parcel out jobs and contracts once more to suit themselves and their bought over allies.

The coup coincided with Covid however, which has provided not only massive opportunities for the power grabbers in terms of further excuses to suspend Parliament (on spurious grounds of emergency) and to access vast sums of public money but also a test of leadership. On the former front they have proven practised and proficient, but with the latter the country has seen a woeful unending failure of management in this crisis.

Summing up the situation, the former prime minister has recently asked for an explanation as to where RM600 billion raised in the name of combatting Covid has actually gone? Whilst businesses and communities have suffered with little support the vaccination effort has barely got underway.

Pictures of the virtually moribund Mahiaddin smugly wandering unmasked past a crowd of attendants this week amply illustrate the situation frustrating the nation. Anyone else in the crowd would have been punished, but not him. A minority appointment the old boy radiates all the cockiness of a party leader who has been swept to resounding electoral victory, not the tired old puppet that he really is.

For months this PN government has meted out tough rules and crackdowns on the population which senior figures have continuously flouted themselves without consequences. Communities have been sealed off with barbed wire. Poor traders and flustered mothers have been hit with RM10,000 fines or thrown into dangerously exposed prison cells, whilst the PM and his pals have travelled, dined out and discarded their masks with impunity.

Yet because of the double standards, the lack of focus and energy (and indeed incentive given that the emergency is all that prolongs this bunch in office) Malaysia has not improved its grip on the Covid crisis but rather tilted headlong to the bottom of the world rankings of the disease.

The country now fares worse in terms of case numbers than even India – and with deaths already spiralling to some 60 a day, those figures promise a grimmer toll within the month. 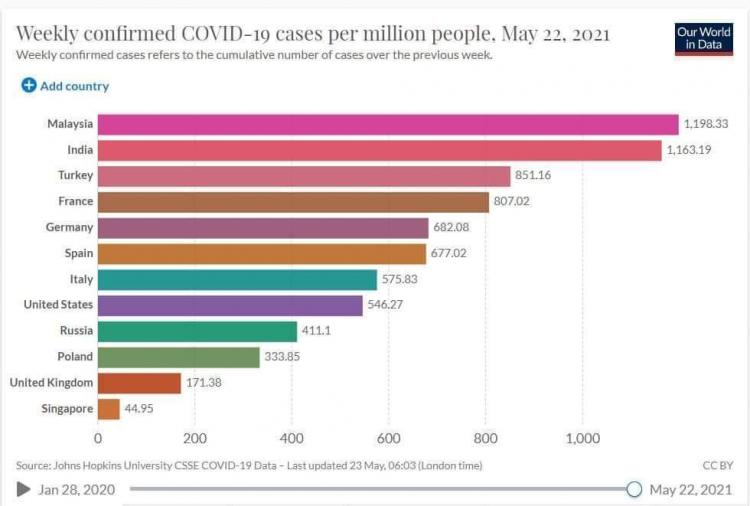 The latest situation as it has viralled through social media

The only segment of the community to have been swiftly vaccinated to meet this horrifying spread of the disease has been the political establishment along with its cronies and officers – Mahiaddin first.

Their smugness has been a jaw-dropping reminder to the Malaysian people of the astonishing sense of entitlement that decades of undeserved privileged has bred in this class of rentier parasites.

The Queen asked on Instagram if folk were jealous? And yesterday, after rolling in hours late to address a deadly metro crash that happened under his watch the Chairman of Prasarana Malaysia Bhd explained he had been otherwise engaged, preparing to receive his second vaccine jab the following day – priorities must come first.

Meanwhile, ordinary Malaysians have been caught up in the mess of a totally botched vaccine roll out that has produced scandal after scandal. Vast sums have been expended on  vaccines that are available for a fraction of the price on the open market.  Naturally. It is all about the commission when it comes to public spending in Malaysia as every angry citizen well knows.

Huge quantities of the over-priced vaccines have also been allowed to rot thanks to the inefficiencies engendered by cronyism.

The population, including the elderly and those in rural communities, have been expected to self sign online for the vaccine programme, which it is has now emerged was commissioned for some RM70 million by the coup coalition geniuses in charge. It turns out the technology being used can actually be downloaded free from the internet and it has predictably crashed under the strain.

Those who have managed to get called to receive their jab have reported inhumane conditions and treatment created by utter incompetence combined with callous arrogance (after all anyone who is anybody received their Pfizer jabs weeks ago in air-con hospitals or their own residences).

The elderly, the sick and most vulnerable have found themselves forced to line up cheek by jowl in the open street under the blazing sun for hours waiting to be herded for their injections. Mainly on offer is the dubious Sinovac vaccine, globally regarded as the least effective brand on the market, despite the huge sums the government says it has spent on immunisation products.

Could not the Agong have offered his air-conditioned stables or do his hundred precious polo ponies still take precedence? What about the spacious shopping malls that could also have been commandeered? Is anybody thinking about the suffering?

Meanwhile, in places like Sarawak, remote communities are receiving just one day’s notice to present their populations, old and young alike, at distant vaccination posts located hours away without any transport plans provided. In places like Belaga the message to Sarawak Report has been that there simply are not enough staff and resources to send teams up to the interior to vaccinate on site. As a result these vulnerable populations are missing out on their jabs and now reporting amongst the highest rates of Covid in the country.

However, poor folks’ lives are plainly not the priority which is why the present prime minister, living out his lifetime’s dream of obtaining the top job (albeit not by election but by appointment), appears to look so relaxed and smug despite the imploding situation.

Questioned why he has failed to implement a full lockdown in the face of spiralling cases he simply replied that his government has run out of money to support the business sector. Again, no detail on where the money went and zero appreciation that whilst this stance may gratify business leaders the consequences could be economic implosion if a continuing spike collapses the medical system and creates panic. 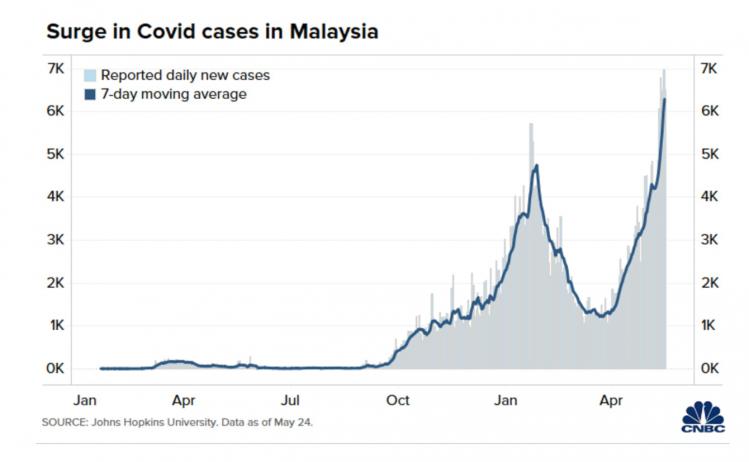 Mahiaddin, who is himself a long-term cancer patient, reportedly rests for much of the day and is rarely seen, leaving a vacuum in government at the very top. Meanwhile, the horror of the burgeoning Covid statistics has hit the population like a metro train in a tunnel – Malaysia’s statistics now outclass India in terms of cases per head of population, as confirmed today by a CNBC report that reflects figures that have been spreading like wildfire through WhatsApp channels over the past few days.

Malaysia is an emerging middle income oil producing nation that could afford to vaccinate its modest population and possesses the medical infrastructure to make it happen. This opposite situation, as everybody knows, is the consequence of corruption and incompetence and leadership priorities that have had nothing to do with the public health emergency and everything to do with the political emergency facing a government that no longer holds a legitimate majority.

Mahiaddin will doubtless respond by having another rest and further postponing Parliament, state elections and all the rest, all thanks to the on-going willingness of an Agong who saw fit to cancel a meeting of the Council of Rulers when he judged they would vote against his plans to enact this politically motivated State of Emergency that has sealed a bunch of grasping and unelected incompetents in office for well over a year in the face of growing public exasperation.

Malaysia’s drift in governance needs to be swiftly addressed to save lives and the economy to boot.