With large swathes of Malaysia, including Sarawak, now being re-designated as Red Zones owing to a surge in cases of Covid across most of the country, it is becoming ever clearer that slow vaccine roll out has become a major problem in tackling the disease after a year of punitive orders that have appeared as much political as health driven.

Under the personal urging of the Agong, Parliament pushed through a budget to release huge sums for purchasing vaccines in November, after which a ‘State of Emergency’ was called anyway followed by ’emergency ordinances’ that have allowed the minority coup government to continue to raise sums without scrutiny.

Yet, as citizens across the world have been baring their arms to a growing variety of licensed jabs now on offer, in Malaysia, apart from the country’s elite movers and shakers, few have been immunised by comparison – a pathetic 3%.

The politician fronting up the vaccination drive, Khairy Jamaluddin, has blamed ‘rich countries’ for snatching the available vaccines, despite the fact that Malaysia’s abundant allocated cash is presumably as of interest to the market as anyone else’s? What’s more, other medium developed economies in the region have done far better.

Ludicrously, at the same time the frog ‘Flying Car’ Minister Redzuan Yusof has announced the country will be donating 50,000 vaccines to Bosnia in a spirit of humanity owing to the conflicting claim that Malaysia has been given “priority” – so what is going on?

“based on our caring policy, we agreed to bilaterally provide 50,000 doses of vaccine (to Bosnia-Herzegovina) as we understand not all countries are as lucky as Malaysia who was given a priority to obtain the Covid-19 vaccine”

It would seem that the actual problem with Malaysia’s roll out (potential inefficiencies and poor provision of health care to regions like Sarawak to one side) is that the vast majority of the world’s tested drugs have yet to get the stamp of approval through Malaysia’s domestic licensing system,

Astra Zenica, Johnson and a host of others may have been given the go ahead in regions like the US, UK, EU and India but Malaysia is still withholding local use pending its own presumably superior vetting procedures.

Indeed, this has provided the excuse and explanation for a third party denial over the weekend on behalf of the Agong himself, who was the subject of a highly embarrassing article which quoted sources saying that he and his entourage had all taken up the Sinopharm vaccine, donated to them as a special favour by his pal the Crown Prince of Abu Dhabi which has invested in trials (one assumes the top brass in Abu Dhabi will have themselves have taken Pfizer, the first gold standard to appear on the market).

The Health Minister insisted the report could not be true on the grounds, he said, that the Sinopharm has not been approved in Malaysia as the required protocols have not been completed.

Dr Adham [Baba] said the report by Asia Sentinel, which also claimed that some in the royal family were also vaccinated and procured 2,000 more doses during the visit, was baseless as any such decision needs to go through the National Pharmaceutical Regulatory Agency.

“After the stringent assessment, it will then receive approval from the Covid-19 Immunisation Task Force. Not just that, we made sure all vaccines purchased are safe,” he reportedly said, accusing the writer of having an ulterior motive.

The Health Minister’s logic therefore was that the Agong could not possibly have taken the vaccine donated by a pal owing to failure to complete protocols. Malaysians are doubtless waiting for the direct confirmation of this deduction from the palace itself, which had earlier announced a plan to vaccinate a further 500,000 Malaysians with the same trial product (scotched by the authorities for the same reason of lacking a licence).

It is a situation that has injected further widespread speculation that this Malaysian tardiness and confusion might in fact owe largely to Malaysia’s endemic Cronyvirus condition that has spiralled blatantly out of control under the present contested and unelected minority administration which only retains power thanks to the ‘Emergency’ called by the Agong (in the name of fighting the pandemic).

The entire procurement exercise has been kept secretive in the name of commercial sensitivities by the government, which has benefitted also from the absence of the Public Accounts Committee to scrutinise the spending of RM17 billion set aside in the budget for the purpose (and now apparently more).

As a result no one knows how much has been spent on the vaccines or how exactly they were commissioned, provoking a flood of speculation that owing to Cronyvirus Malaysia will have been paying well over the odds with plenty of leakage to middlemen on the way. All of which have been denied, of course.

On the other hand it is public information that the only vaccines licensed for actual use so far in Malaysia are the Pfizer (used by most MPs and frontline workers) and the Sinovac, which is now being distributed haltingly through the population (Astra Zenica was conditionally approved but remains un-confirmed).

As of February some 68 million doses had apparently been procured but it appears only these two remain certified for use: 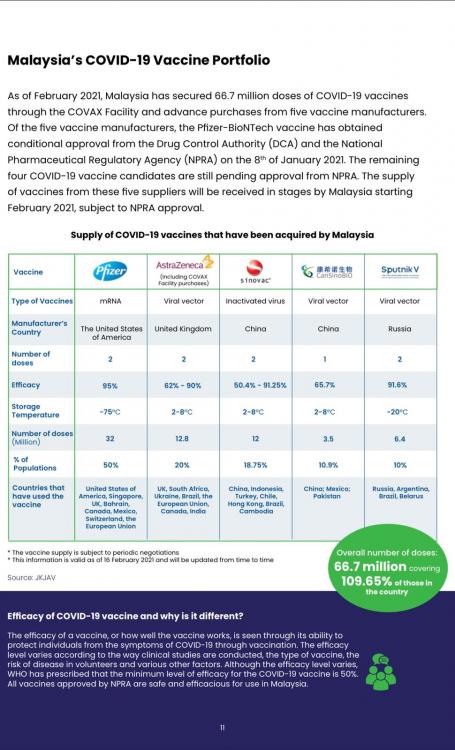 Latest official data from the Health Department of Malaysia

Why Sinovac, one of the China made vaccines, has achieved this honour above a whole number of other more highly rated products internationally is causing questions to be raised. Information about the efficacy of Sinovac has been particularly hard to get, according to the international medical community. However what has finally started to come out is not promising in the least compared to the stellar results of drugs like Pfizer, Moderna and Astra Zeneca.

The World Health Organisation has issued a 50% efficacy benchmark for any vaccine to be recommended and, compared to well over 90% in most other brands, Sinovac has now admitted that around 50.4% is what it has achieved. Without adequate data to confirm it the international medical community are sceptical even of that.

Which raises two issues as far as Malaysia is concerned. The first is that Sinovac is unlikely to be receiving any significant genuine demand apart from the order from Malaysia and therefore ought to be available at rock bottom prices, if not for free.

The second issue is why is Sinovac continuing to be the main roll out choice by Malaysia’s Health Ministry whilst far preferable drugs which have been procured are not yet locally licensed?

Could Cronyvirus be behind this apparent lamentable failure to tackle Coronavirus in other words?

Giving the on-going secrecy of the emergency demands to have the answers to this and all the other concerns about efficiency, such as that made by the opposition leader Anwar Ibrahim on Friday (below) are likely to go unanswered.

Meanwhile, ordinary Malaysians are now being faced with the choice of submitting to a vaccine that is globally now regarded as little more than useless or waiting longer in the hope that eventually someone gives permission to licence a better drug.

On Friday Malaysia reported 2,551 new Covid-19 cases. After 395 days of MCO restrictions and almost 100 days since the imposition of a national emergency, we are right back where we started, minus six weeks of progress towards resuscitating the economy and supporting struggling families. The implementation of the MCO is a failure. The imposition of an Emergency is proven to be a phony excuse to cling to power. The vaccination plan to save the country is regrettably slow.

There will, however, be no accountability for political leaders responsible for planning and executing policies, procuring vaccines, and ensuring that the vaccination plan is as fast and efficient as possible. This is the result of an illegitimate government which used the pandemic to stay in power and abused the constitution to retain power.

In the coming days I expect government officials to chastise the rakyat for violating SOPs and to announce a new set of confusing and conflicting rules that, if broken, will lead to exorbitant fines and penalties. This will include a ban on interstate travel for Raya celebrations, although ministers will be allowed to travel and hold public events.
I call upon the government to respond to the following questions:

1. The Coordinating Minister for vaccination said that Malaysia’s vaccine supply is low because rich countries cornered the market. This is impossible to verify unless there is transparency in the procurement process. It is disappointing to hear Malaysia clamouring to be recognized as a high-income, advanced nation but whenever push comes to shove, the government’s excuse for its poor performance is to say that Malaysia is a small and poor country. Given that other middle income countries have demonstrated higher vaccination rates, the minister’s explanation may not hold water once the facts are known. Alternative and plausible explanations for why Malaysia has a low supply of vaccines right now are that the government was slow to secure contracts, failed in its negotiations with suppliers and ended up last in line.

2. The Coordinating Minister claims Malaysia will be able to reach 80% vaccination rate by the end of the year. Yet the pace of vaccination in Malaysia is slow and the rate of vaccination has not increased since vaccinations started in February, roughly 24,000 doses administered per day. Compared to 13 middle income countries of various sizes across Asia, Malaysia’s vaccination rate is slow. We request verification as to logistical capacity across Malaysia to administer over 210,000 dose per day, which is what is required to reach 80% coverage by the end of the year. This includes logistical coordination with hospitals, care facilities, public health clinics, general practitioners and pharmacies. This plan should be revealed, if not to the public, than at least to the bipartisan committee.

3. Why, with a border closure and strict quarantine on arrival are dangerous strains of the virus appearing in Malaysia? The border closure has affected a terrible cost on our economy which is done in the interest of saving lives. If the border closure is not managed effectively then we are sacrificing the economy with no tangible benefit.

4. What progress has been made towards holding the private sector accountable for the spread of Covid-19 infections among the foreign worker community?

5. Vaccination registrations remain low, raising doubts that herd immunity can be reached by the end of 2021. What is the government doing to convince the public to participate in the vaccination program?

6. What are the tangible metrics which the bipartisan committee is considering in its determination to recommend an end to the state of emergency?

I ask all Malaysians to register for the vaccine. I urge all Malaysians, including those who have obtained vaccinations, to continue to adhere to SOPs for the safety of all. I understand the temptation to let our guard down is high. Given the reality of the situation we face, we must continue to be vigilant for the long haul.