The $450 million dollar super-yacht Topaz, first linked with 1MDB by Sarawak Report back in 2015, more recently attracted attention when it underwent a major re-fit in 2019 and changed its name to anonymous sounding ‘A+’.

Commentators in the rarified world of such vessels wondered if this indicated new ownership, although no sale had been formally registered?

The seventh largest yacht in the world at the moment of writing, the 147-metre Topaz was built by German shipyard Lürssen in 2012. She has been now renamed A+, with no record of changing owners or being earlier listed for sale, though. [yachtharbour.com]

The original owner, as we had reported, was widely known to be Abu Dhabi’s Sheikh Mansour, the boss of the wealth funds Aabar/IPIC which were now up to their necks in the scandal of Malaysia’s missing money.

What we reported in 2015 was that there was evidence of massive payments from bank accounts funded by the stolen money (the Vasco Trust account held by IPIC CEO Khadem al Qubaisi in BPERE in Luxembourg) to a company Oceanus Maritime Limited related to that yacht. 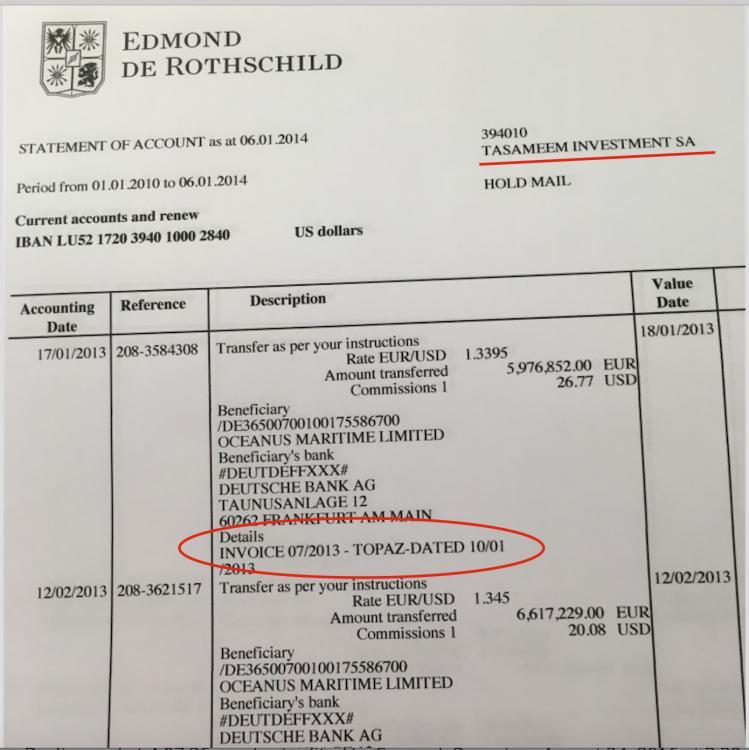 Oceanus Maritime was a front company set by Khadem Al Qubaisi to acquire the yacht, Department of Justice investigations have now explained.

What Sarawak Report did not know at the time, but which the yacht’s original official owner Sheikh Mansour surely did, was that a €400 million loan remained outstanding from Deutsche Bank that had been used to pay the bulk of the original $688 million price tag.

Oceanus Maritime now proceeded to use money funnelled to Khadem Al Qubaisi from 1MDB by Jho Low to pay a huge chunk of that money back month by month.  A staggering $160 million was funnelled in total through this route to help pay off what had been Mansour’s outstanding debt on the purchase price.

When the US Department of Justice filed updated court papers late last year detailing the staggering situation it provided confirmation that Abu Dhabi’s royal players directly benefitted from the thefts they had actively assisted from Malaysia’s development fund.

It even appeared that they acquiesced in an official transfer of ownership of the yacht to the IPIC CEO who worked for Mansor – apparently to enable the payments to be made to the bank. There was no way that the Emirati official could have legitimately been able to meet such sums. There was no way he could legitimately have bought such a yacht from his boss – that’s why he is in jail for corruption now.

Yet in this manner, kickbacks ended paying off around half the cost of Sheikh Mansour’s biggest toy – on which the likes of Jho Low himself and Leo DiCaprio had sported as guests during the Brazil World Cup in the year following the Abu Dhabi thefts and where Rosmah Mansor fitted herself out for a $27 million diamond diamond set organised by Jho Low.

The Emiratis even had the cheek to charge their Malaysian co-conspirators €3.5 million a week to charter the yacht on these occasions, paying the Abu Dhabi owners even MORE of 1MDB’s stolen money!

On or about July 5, 2013, Schwartz traveled to Monaco and met LOW aboard the Topaz, one of the largest private yachts in the world. LOW and TAN had chartered the 147-meter yacht for seven days in early July 2013, and according to an invoice submitted to Falcon Bank, they paid €3.5 million for the rental, using proceeds of the 2013 bonds.
Aboard the Topaz, Schwartz showed the pink diamond to a group of people that included LOW, HUSSEINY, the wife of MALAYSIAN OFFICIAL 1, and one of her friends (“Malaysian Friend”). The group discussed the design of the necklace to hold the 22-carat pink diamond, which itself would be made of smaller diamonds [Department of Justice Filing]

All in all, according to the DOJ, Jho Low hired the yacht no less than five times at a total cost of over €21.3 million (see DOJ filing bottom of the article).

However, by the time the world found out the details of the $160 million + €21.3 million theft, Topaz was renamed A+ and Sheikh Mansour was focusing on building a new seafaring toy according to yacht world media (one that itself controversially went up in flames in a shocking fire) Project Sassi.

No one from Abu Dhabi has returned the money from Topaz.  To the contrary it is Malaysia which has been paying Abu Dhabi for helping to cover up the wider fraud ($1.46billion so far). How they must be laughing in the royal compounds of the sandy Gulf.

So, what is the story behind A+ and the suspected new ownership?

Articles tracing an astonishing art purchase appear to generally conclude that the once 5th largest yacht in the world was the subject of a ‘royal gift swap’ back in 2018.

At the time the so-called strong men in the Gulf, MBS (Saudi Crown Prince) and MBZ (Abu Dhabi Crown Prince) were acting as close allies, united by their brutal war on Yemen and the boycott campaign against their fellow Arab kingdom Qatar.

Both were courting the United States and other powers to back their agenda and observers were therefore especially intrigued by various expenditures that appeared to potentially court global political support.

These included one spectacularly inflated art purchase of a Leonardo painting, which was bid up to a staggering $450 million by the two princes themselves, apparently rivalling each other. The beneficiary was a Russian oligarch named Dymitri Rybolovlev, best known for making a major profit for Donald Trump over a Palm Beach property.

In 2008, the Russian billionaire paid Trump $95 million for an oceanfront Palm Beach estate that Trump had purchased for $41 million in 2004; the house sat empty for years before being demolished. [Palm Beach Estate News]

The billionaire eventually made his money back redeveloping the land.  However, it was nothing compared to the profit he made in November 2017 selling on the ‘Salvator Mundi’ Leonardo, which he had bought for a mere $80 million, to the rivalling Crown Princes, who later published their excuse that they had ‘thought they were competing against Quatar and not each other’.

This is what it is reported happened next, according to the business news site  fastcompany.com:

“MBZ was trying to buy it for the Louvre Abu Dhabi. Saudi Arabia “won” the painting, but then gave it to MBZ in exchange for the crown prince’s $450 million super-yacht, the Topaz. “

How convenient. A hot potato had been bounced out of the known possession of the Emirati royal family and we now appear to know the identity of the illustrious new owner.

And yet how strange. According to the DOJ the official right to gift Topaz (ie its beneficial ownership) had after all by then passed to Oceanus Maritime, which was beneficially owned by Khadem Al Qubaisi (KAQ), Sheikh Mansour’s right hand man at IPIC.

KAQ had been long since arrested over 1MDB and yet here was Mansour’s older brother the Crown Prince handing it over to a foreign royal ally as a form of playful private trophy swap.

It is almost as if the ownership of Topaz was not with the royal family for the purposes of paying off a loan with dirty money, but was when it was time to use it for a lordly Leonardo yacht swap.

The commentators on this event have speculated that the strange, grossly inflated purchase of the Leonardo that so enriched a Putin connected Russian oligarch may have been simply a way to funnel funds from the gulf to key players linked to folk like the then President of the United States.

Malaysians may be more interested that the bizarre possession swap at the same time divested the Abu Dhabi royal family of what had become a toxic toy, which they by then must have known was in the sights of the FBI/DOJ investigation as a major act of theft at the heart of the 1MDB scandal – one that implicated them.

See the DOJ explanation of the fraud:

UU. OCEANUS MARITIME ACQUIRED OWNERSHIP OF THE A+ YACHT IN PART THROUGH FUNDS DIVERTED FROM 1MDB’S 2012 BOND DEALS AND THE 2014 DEUTSCHE BANK LOANS

1056. On August 10, 2012, Oceanus Maritime Ltd. (“Oceanus Maritime”) took possession of the yacht M/Y A+, formerly known as M/Y Topaz, International Maritime Number 9551454 (“THE A+”), based on a 2008 purchase contract with an approximately $688 million purchase price. Upon information and belief, Oceanus Maritime is beneficially owned by EMIRATI OFFICIAL #1, a UAE public official in a senior leadership role within IPIC. Oceanus Maritime funded the purchase in large part through a 400€ million loan from Deutsche Bank. It then proceeded to pay back the loan, in tranches, through money that was misappropriated from 1MDB. More specifically, as set forth below, $160,930,752 of funds misappropriated from 1MDB was used to pay back the Deutsche Bank loan and thus acquire partial ownership of THE A+.

1058. Some of the subject funds took a different route to reach the Oceanus account. Specifically, on September 4, 2014, $14,617,458.50 was wired from the Affinity Equity account to the Tasameem Investments account. As set forth above, the money in the Affinity Equity account was traceable to the proceeds of the Deutsche Bank loans from the Options Buyback phase of the conspiracy.

Vista Equity account – like the Affinity Equity Account – was funded through the proceeds of the Deutsche Bank loans from the Options Buyback phase of the conspiracy.