The original grand plan to palm Malaysia off with half a million jabs of trial Covid vaccine to at least part-settle the Abu Dhabi royal family’s dues for its participation in Najib’s 1MDB fraud appears to have driven into the sand.

Following general outrage at the proposal the Agong returned from his trumpeted trip to meet his Sandhurst buddy MBZ, the Crown Prince, in Abu Dhabi last month with nothing to announce.

Now the coup cabal are back in town for another go, this time led by foreign minister Hishamuddin Hussein, who is Najib’s cousin and a key lynchpin in the ’emergency’ minority government.

Hishamuddin’s entourage includes the lawyers tasked by PN to shut down a once highly promising case in the London courts that might well have squeezed several billion dollars from the wealthy kingdom – enough to solve all Malaysia’s vaccine costs using proper drugs.

And all the signs lead one to expect the announcement of a ‘settlement’ in hours, given that Abu Dhabi are now desperate to get rid of the toxic exposure and the KL coup coalition are desperate to get what cash they can for imminent elections.

The losers once again will be the Malaysian public who will find themselves palmed off with lousy compensation once again …. money which is bound to be diverted to PN’s ‘election priorities’ anway

Why Even A Billion Dollars Is Cheap Change Over 1MDB

Abu Dhabi may be soaked in oil wealth, but it doesn’t make them generous. Despite being up to their necks in guilt over 1MDB, sources confirm that the emirate’s lawyers have been playing hardball over talks for compensation ever since PN stepped in to press for negotiations in lieu of pressing Malaysia’s advantage in the matter.

This is the same ‘ally’ after all, which proved only to happy to help Najib rip off his own people in return for a handsome half billion dollar backhander into the bank account of the sovereign wealth fund CEO Khadem Al Qubaisi, via a bogus off-shore subsidiary of the wealth fund that he himself set up then another off-shore company belonging to Jho Low.

Rather damningly, around half the money received by Al Qubaisi ($160 million) was then used to pay off the debt owed on the Chairman’s super-yacht. The Chairman being none other than Sheikh Mansour, the younger brother of the Crown Prince.

Followers of Malaysia’s global scandal are aware of much of the evidence that would have been discussed in court. Before the fall of PH, for example, recordings were released of Najib himself on the phone to MBZ in 2016 begging him to help him out over the whopping payments which had been discovered to his stepson Riza and over 1MDB’s billion dollar debts.

Both of them, he reminded MBZ in a fawning form of threat, had ‘people dear to them’ exposed – movies on the one hand, yachts the other.

So, the Crown Prince did help out, but only in a spectacularly one sided agreement that was wholly advantageous to himself. The secret arbitration signed up to by Najib in 2017 meant Malaysia agreed to repay a staggering $5.78 billion over 5 years in return for Abu Dhabi stepping in to honour its bogus guarantees (which had been used to defraud Malaysia in the first place).

As ex-AG Tommy Thomas laid out in Malaysia’s case accusing Abu Dhabi of having assisted and profited from effectively defrauding Malaysia not once but twice, the Emirate has already received $1.46 billion of that ‘settlement’.

Earlier last year Sarawak Report explosively revealed just how that $1.46 billion was channelled from Malaysia to Abu Dhabi.  Najib first raised the cash by paying for a bogus pipeline contract up front, then funnelled the money through a Kuwaiti front man (Sheikh Sabah, son of the then prime minister) who had been befriended by Jho Low.

Sabah then paid the money back to 1MDB (minus his fat fee) for a non-existent purchase of an inflated parcel of land, after which it was then sent on to Abu Dhabi…. all within days thanks to the expert money laundering services of China’s ICBC bank.

Malaysia’s case against Abu Dhabi, therefore, is that for profit the emirate’s sovereign wealth fund, headed by the Prince Mansour, connived in a massive theft that has left 1MDB servicing multi-billion dollar debts at a shockingly inflated cost.

What ex-AG Tommy Thomas had in mind to rectify this injury was reportedly compensation in the region of the $6.5 billion originally raised in bonds through Abu Dhabi. Abu Dhabi can afford it and along with Hishamuddin’s cousin are the guilty party. However, they are mean and PN suspended the case along with the leverage it had.

The PN boys meanwhile are desperate for cash. Not to help Malaysians suffering from the plummeting economy it must be said, but to cover their planned election expenses. 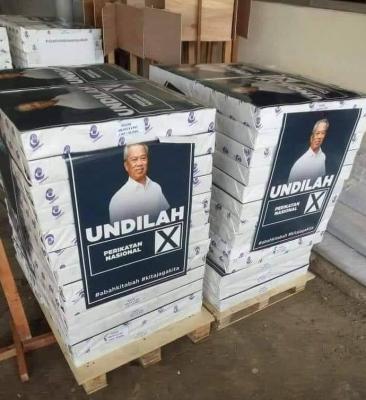 Vote PN! – the election that has not been suspended after all

Evidence has started to surface of a major ‘Vote PN’ production effort now underway confirming that the calling of an ‘Emergency’ to prevent an election in a pandemic was all about playing for political time (again).

A further billion dollars would do the cabal nicely in that respect, on top of other netted gains, and informed calculations are that it is roughly the sum Malaysians can expect a ‘triumphant’ Hishamuddin to announce that IPIC has agreed to pay in ‘peaceful settlement’ of differences between ‘dear allies’ over the coming hours.

He may even refer to the sentencing just last week (six years after their arrest) of the two key flunkeys at Aabar who assisted in the crime, namely CEO Khadem Al Qubaisi and his deputy Mohammad al Husseiny. Perhaps this will be presented as another ‘gesture of atonement’ by Abu Dhabi (even if the two were not named in the secretive proceedings favoured by the autocratic kingdom) with which Malaysia should be satisfied?

If so the coup cabal will once again have sold the country dismally short in their dash for a quick cash settlement – after all 1MDB paid the Abu Dhabi conspirators first $500 million in backhanders and then $1.46 billion under the ensuing fraudulent ‘settlement’. So Malaysia would not even be getting half its money back.

But for PN it will be hard cash in the hand and for that they will attempt to package the deal as a massive trump of diplomacy thanks to the gracious interventions of the infallible and all-powerful Agong and the wisdom of Najib’s cousin.

Malaysians will keep their thoughts to themselves as the factories in China start to receive their payments for the tens of thousands of PN election posters and flags currently pouring off the assembly line.

Because although the State of Emergency was called on the excuse of avoiding an election in a pandemic, they plainly plan to hold one the moment they are ready, pandemic or no pandemic. 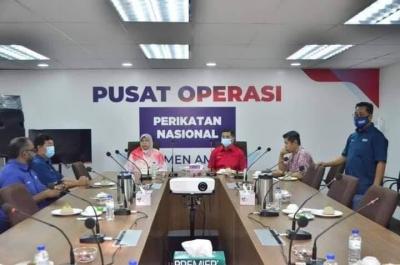