Samling is one of the world’s most notorious timber raiders, protected for decades by the crony State Government of Sarawak.

Like the other main Sarawak ‘Big Six’ logging and plantation concerns this company’s lawless, destructive and greedy exploits are responsible for ruining the lives of millions of indigenous peoples and destroying precious landscapes across Borneo, Papua New Guinea, Africa and South America.

The litany of violations, corrupt practices, scale of destruction and of course legacy of impoverishment to the millions of peoples whose lives have been ruined by this company should label their product ‘TOXIC’ to any buyer anywhere.

Yet, ‘Hey Presto’ it has emerged that in the middle of the Covid crisis the Malaysian certification body SIRIM Qas Sdn Bhd (wholly owned by the Ministry of Finance) awarded Samling a ‘Forest Management Certificate’ for a vast chunk of the Baram area – 148 thousand hectares in the Generai forest. 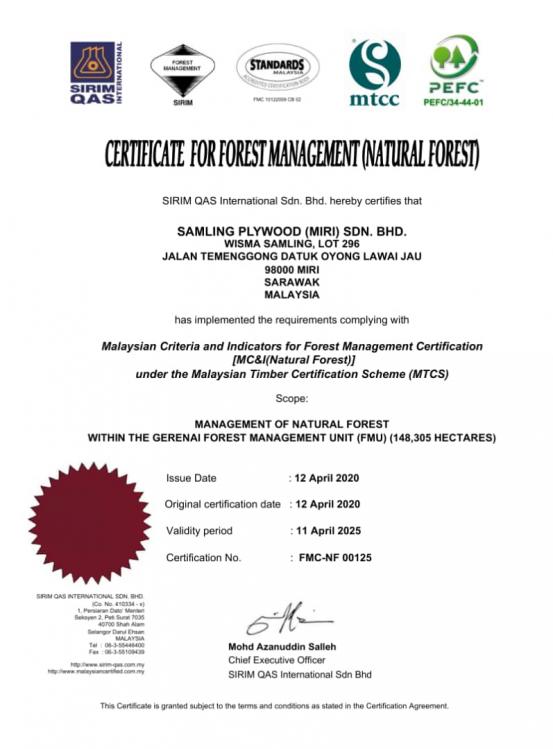 Handy validation of ‘good practice’ by the Malaysian authorities

We Need It To Sell Our Plundered Timber, Samling Admitted

The Save Rivers Campaign, which has fought to protect the once pristine Baram region from destruction and pollution, has obtained a clear explanation as to why this official certification is so valuable from the logging giant itself.

In a press release this week the NGO exposed how the certification had been awarded in violation of the Malaysian Timber Certification Scheme and without the knowledge of the local communities who have been suffering rampant logging by Samling in their traditional homelands:

“This certification is supposed to guarantee that Samling followed the Malaysian and international standards for timber, so that the timber can be sold off in European countries and Japan. Without this certification they won’t be able to sell any of that timber.”

was what Sim Kit Chui, Samling’s own Public Relations Officer, told Save Rivers.

Bogus Credentials Must Be Rejected By International Buyers

The five year certificate was awarded on 12th April when all of Sarawak was under strict lockdown, including the communities living in the Gerenaj Forest.

Only the timber industry was given a special dispensation by the coup coalition supporting GPS state government, allowing companies like Samling to continue to log native lands against their will…. and it emerges to negotiate this secret certificate to help the sell the wood.

However, as the Save Rivers’ Chairman, Peter Kallang, has pointed out a key criteria for gaining such certification is the obtaining of the consent of the native people and this certification has been awarded in a direct violation of the requirements under the Malaysian Timber Certification Scheme:

According to the Malaysian Timber Certification Scheme (MTCS) guidelines, ‘Indigenous peoples shall control forest management on their lands and territories unless they delegate control with free, prior and informed consent to other parties.’ According to the MTCS procedure, Samling is required to consult all communities affected by prospective logging. In reality, Samling conducted inadequate consultations with most communities in the Gerenai concession and failed to consult two objecting communities entirely. [Save Rivers]

One of the affected communities are the Jamok people who mainly live within two villages in the area Long Tungan and Long Si’ut. 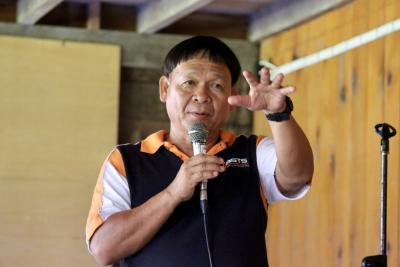 John Jau Sigau, speaking for the Jemok people seeking to save their community forest

A spokesman for the thousand plus inhabitants, John Jau Sigau, told Sarawak Report how over the years the community have struggled to maintain a tiny remaining area of around a thousand hectares of unlogged virgin territory as their community forest as companies including Samling have ravaged the region, logging it over two sometimes three times since invading during the 1980s.

“We want to conduct a survey as we fear we probably have a lot of very valuable wood that they will want to steal” explains John Jau Sigau.

In July 2018, the Jamok community’s worst fears were realised when locals discovered that the Samling bulldozers had started encroaching into the region which they have sought to protect by establishing its status as Ba’i Kerumun Jamok/ “The Jamok’s Treasured Community Forest”.

“We went over to Miri five times to meet with the company to protest” says John Jau Sigau  and he says the company finally agreed to pull out their loggers from the illegal operation. In the end the village elders agreed to settle for a trifling RM10,000 for the hundred valuable trees that had been stolen by the company, in return for a promise to keep away in future.

Fearful of the ongoing threat as Samling has continued to run riot in the region the community appealed, together with the support of NGOs such as the US based Borneo Project and Switzerland’s Bruno Manser Fund, to Sarawak’s Forest Department to survey and gazette their area. However, says Sigau, all these many months later there has been no response from the Social Director of Forests Zarina Binti Sebli.

Instead, the state government apparatus has been busy gaining Samling’s certificate so that it can sell the wood to buyers in Europe and Japan who might choose to believe a bogus certificate.

confirms Sigau. Yet, the certificate can ONLY be validated if it has been issued in agreement with native people. The fact is that the native people want Samling out of their forests where the rapacious company has stolen from and polluted their lands for decades yet given back zero in terms of compensation or development.

It is the story of Sarawak’s greedy, illegal and deceitful state government which has operated from the pockets of a handful of timber tycoons for decades – families who have used their profits to go on to similarly corrupt decision makers and destroy huge swathes of valuable rainforest across South East Asia with no discernible benefit to the hundreds of millions of people who actually own the land.

Save Rivers has called on Samling to abide by the law and “release the Environmental Impact and Social Impact Assessments for the Gerenai concession to affected communities as a matter of urgency”.  And “for SIRIM and the Malaysian Timber Certification Council to withdraw their certification until indigenous rights and concerns are heard, understood and respected”.

No international buyer from any country should endorse this bogus certification or buy products from the region until these basic requirements have been carried out and the native communities have given their consent to the Samling operations in their lands.