If Malaysians needed any confirmation that they are revisiting the nightmare criminalities of the Najib administration, the present AG has once again offered it under the guise of defending the actions of the government.

In so doing, AG Idrus Harun has almost identically mirrored the legendary bungle by AG Apandi Ali back in 2016 when he waved the truth about 1MDB’s illegal money flows whilst at the same time denying there had been wrong doing!

On this occasion the incriminating document was a lengthy press release produced by the former judge this morning as he sought to explain and exonerate himself and everyone else over the astonishing bargain that prosecutors suddenly announced last week to let ex-PM Najib’s stepson, Riza Aziz, off the hook over the theft of hundreds of millions of dollars of public money.

The prosecutor caught up in the embarrassment, Gopal Sri Ram, then stepped in smartly to announce that the explanations now having been given this was the ‘end of the matter’. As with Apandi Ali the message was ‘Case Closed’.

Except, that like the money flows caught on camera, Idrus Harun’s press release contains damning information. Details about Riza’s deal are laid out with excruciating candour that must have caused the likes of Rosmah, Najib and Azmin to gasp in horror:

“The letter of representation, among others, proposed that Riza Aziz –
i. Surrender his rights in three (3) properties seized by the United States Department of Justice and for Riza Aziz to facilitate the return of the same or its value, to the Government of Malaysia. The properties in question are as follows:

2. Agreeable to have the monies seized from him which form the subject matter in a related matter before the Kuala Lumpur High Court, be forfeited to the Government of Malaysia; and
3. Pay a compound pursuant to section 92 of the Anti- Money Laundering and Anti-Terrorism Financing Act 2001.  [See Media Release in Full below]

So, now Malaysians know the shocking truth about this so-called deal, which is that the bulk of what Riza is supposed to be surrendering up to the Malaysian government in return for being let off scott free has ALREADY BEEN SURRENDERED to the FBI.

The deal was empty: Riza surrendered nothing more than the DOJ already took.

Yet the farce continued to be strung out. Next in his press release the AG proudly added some extra items ‘demanded’ by the Malaysian authorities, apparently ‘playing tough’.  These he said were the “Metropolis Poster” being a one-framed, 3-sheet color lithograph poster created by the German artist Heinz Schulz-Neudamm for the 1927 silent film “Metropolis” and USD14,087,072.76 held in an escrow account at Huntington National Bank, USA to the Government of Malaysia.

So by the end of it a full US$108 million had been claimed back, the AG proudly totted up. 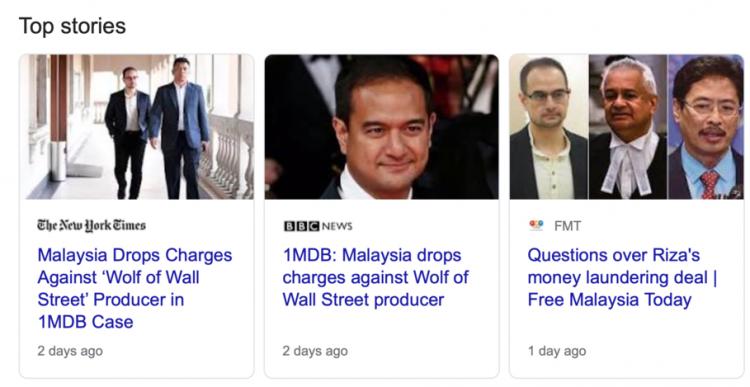 Bogus deal that raised eyebrows the world over

The details of the deal, which gained surprised headlines across the world, had till this point been veiled in secrecy under a generalised announcement that Riza would be ‘handing back’ some US$107.3 million in overseas assets to the Malaysian taxpayer (the extra poster and bank account not having been identified).

Much was made of the stern condition that if the assets were not retrieved then the criminal charges of theft that had been rightfully laid against him would be re-imposed. There was no attempt to pretend that Riza was not guilty.

However, those ‘overseas assets’ were not specified and Malaysians were left to complain that the promised retrieval represented less than half of the US$248.17 million he had been caught stealing and a mere fraction of the RM3.4 billion that his stepfather Najib then tastelessly chose to boast about him having made from investing all that stolen money into movies.

But now, thanks to the details supplied by Idrus Harun, we know! These are assets that have already long-since been removed from Riza by US investigators and listed as such in the various court documents submitted by the Department of Justice over recent years. Riza has surrendered barely nothing further in return for being let off in Malaysia.

Campaigning lawyer America Sidhu has seen it all before:

The money is due to come back to Malaysia anyway, not from Riza thanks to this ‘new deal’ with local prosecutors, but from the US Department of Justice – unless they take better stock of the situation in Malaysia and withhold future money until there is a government free of the original kleptocrats”

Riza opted to give in to the US authorities months and months ago and relinquish all right to claim these grand residences back as well as the self-same “Metropolis Poster”. He also agreed that his film company should pay a fine on top of over US$60 million in recognition of his money laundering crimes. 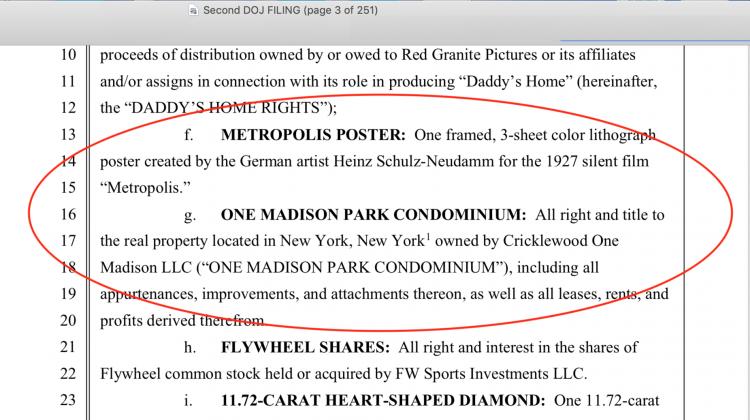 It was in Malaysia that he faced a very different set of criminal complaints, that of complicity in a gross theft from the public purse and laundering of that money. This is not a fining matter as anyone knows. It is a punishable offence of the gravest variety combined with the just confiscation of all the stolen goods.

Malaysia has been deceived and lied to yet again by the same set of thieving politicians and alerted to it once again by law officers placed in an impossible position by those lies.

Government of Malaysia. The properties in question are as follows:

a. One (1) unit of bungalow located in Beverly Hills, California;

b. One (1) unit of apartment located in New York, and

c. One (1) unit of townhouse in London, United Kingdom;

I have been advised that my predecessor Tan Sri Tommy Thomas, after perusing the said letter of representation, via a minute dated 19th November 2019 to Senior Deputy Public Prosecutor Dato’ Seri Gopal Sri Ram, sought the views of the latter, and further stated that in light of the proposals outlined above, he is prepared to consider the representation.

I have been further advised that Dato’ Seri Gopal Sri Ram, in consultation with the then Chief Commissioner of MACC, Puan Latheefa Koya, suggested that the proposals laid down in the letter of representation be accepted by MACC. I have also been advised that Tan Sri Thomas had agreed to the suggestion in

principle. This paved the way for further negotiations and planning of the mechanism to be adopted, to take place.

e. On 13th May 2020, the MACC again wrote to the Solicitors instructing Riza Aziz to transfer USD14,087,072.76 held in an escrow account at Huntington National Bank, USA to the Government of Malaysia.