'Golden Opportunity' For Whom Out Of Sarawak's Coal?

The rest of the world may be seeking to cut back on climate changing coal and even Sarawak poses as a ‘green energy’ leader (falsely) thanks to its hydro-electricity addiction.

Yet this has not stopped a team of somewhat scruffy-looking foreign businessmen turning up in Kuching this week to announce their permitted investment in a ‘golden opportunity’ – to mine yet more of the choking black stuff from the state.

Last time Sarawak coal mining hit the headlines was after a Taib family company was exposed by Sarawak Report for hiring North Korean prisoners as slaves – prisoners who ended up burnt and some killed after an underground explosion.

Yet, the three representatives of the India and South Africa-based Osho Ventures painted a rosy picture (as reported by the Taib family-run New Sarawak Tribune) of the immense benefits their planned exploitation would bring the state.

Their activities would put Sarawak on ‘the global map for coal mining’ they enthused, as if in an eco-conscious world this would be considered a good rather than a very reprehensible reputation to enjoy.

The men from Osho then made another even less convincing claim, which was that the public purse will hugely benefit from the taxes and royalties their mining activities would generate.

Sadly, the history of exploitation of Sarawak’s resources does not bear out much optimism in this respect. The entire island has been stripped of timber by companies that declared losses not profits and who through so-called ‘transfer pricing’ admitted to only a fraction of the returns they actually obtained on the open market.

Their patron over several decades was the then chief minister and present governor, the unaccountably wealthy Taib Mahmud.

The result of all the plunder? Super-wealth for the tycoons and their political pawns (specifically the Taib family) but virtually nothing for the people and public coffers of Sarawak. Ditto Sarawak’s oil, filched by the federal government and ditto the profits from palm oil and plenty more besides.

Sarawak is a state the size of the United Kingdom that represents one of the richest corners of the planet in terms of till recently untouched resources – and yet its tiny population of just three million has barely seen a fraction of all the wealth extracted over the past half century under the Taib Mahmud regime.

So who is primed to get the ‘golden opportunity’ this time round and trouser the money that is so misleadingly being advertised as destined for the cash-strapped state treasury and impoverished people of Sarawak?

Sarawak Report is concerned that the early signs emanating from this press event at least indicate that the main beneficiary of this latest planned extraction will be exactly the same family that has benefitted from the rape of Sarawak’s resources each and every other time under the governance of Taib Mahmud – his own.

The red button danger signal was the presence in that line-up of foreign businessmen of a familiar Taib crony, none other than one Siva Kumar G as he is known in Sarawak.  He is better known under the name of Sivakumar S Ganapathy in his capacity as managing director of Asia Public Relations Sdn Bhd, a company that recently and controversially executed a surprise take over of one of Cambodia’s remaining independent newspapers, the Phnom Penh Post, for several million dollars.

This week, this gentleman was presented as Osho Ventures’ investment relations officer there in the line up at the press conference. It is a title he seems to have bandied around, since meeting up with Osho Ventures (apparently called in to do their PR?) in 2019. 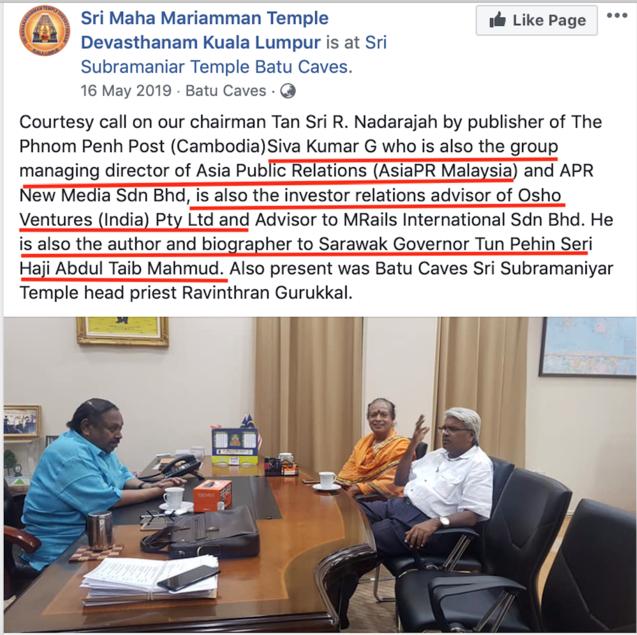 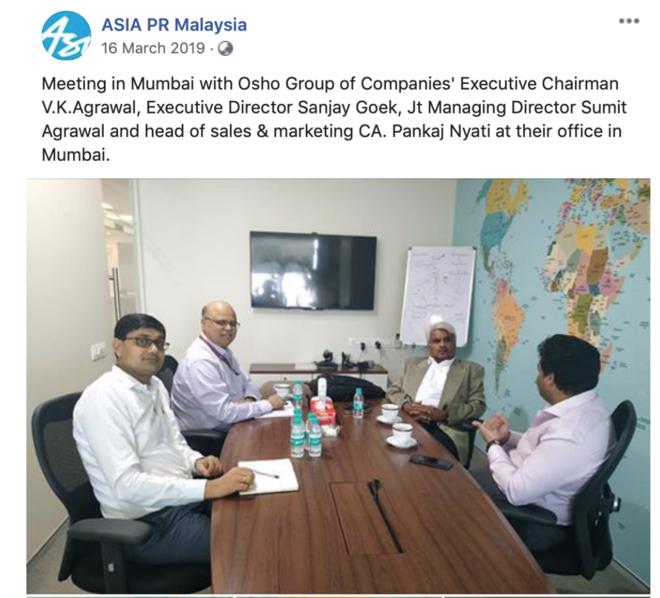 The reason why onlookers have a right to raise a red flag over the key involvement of this gentleman in Sarawak’s newest resource initiative is that the involvement of Siva Kumar G indicates that ‘Endorsed by Taib‘ is written all over a venture that does not appear to have been tendered or subject to public planning approvals, as ought to happen.

We know all about SKG’s career and his ties to Taib, thanks above all to his own autobiographical note, proudly printed on the cover of the second of his two slavishly sycophantic authorised biographies of Abdul Taib Mahmud – the latest being published at enormous length in 2015 (TAIB – THE VISIONARY, comprising 810 pages, 33 chapters covering his 33 years as chief minister). 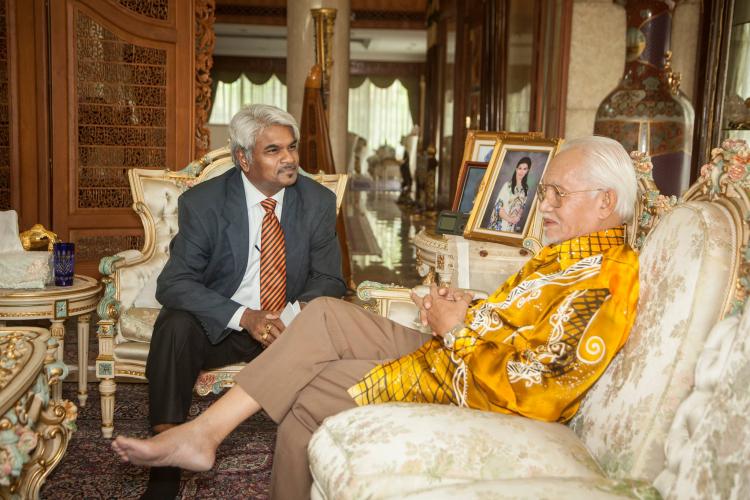 Siva Kumar G does not hesitate to admit Taib as being the backer of the publication nor, even more astonishingly, that the purpose was to weaponise the paper’s news coverage against Taib’s own uncle, whom he had managed to replace in 1983 but remained in a political struggle with until the so-called Ming Court Affair in 1987, after which Taib grasped full control of all the money-producing levers of the state: 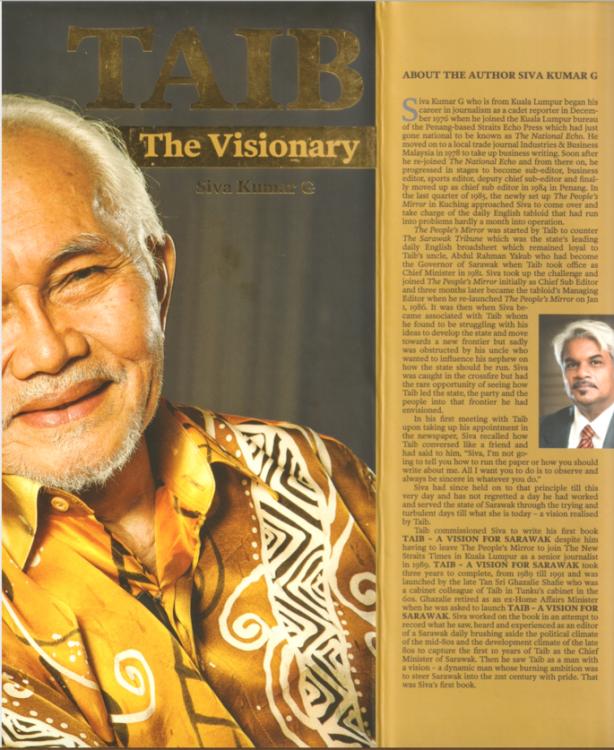 In the last quarter of 1985, the newly set up The Peoples Mirror in Kuching approached Siva to come over and take charge of the daily English tabloid that had run into problems hardly a month into operation. The Peoples Mirror was started by Taib to counter The Sarawak Tribune which was the state’s leading daily English broadsheet which remained loyal to Taib’s uncle, Abdul Rahman Yakub who had become the Governor of Sarawak when Taib took office as Chief Minister in 1981. Siva took up the challenge and joined The People’s Mirror initially as sub-editor and three months later became the tabloid’s Managing Editor when he re-launched The Peoples Mirror on Jan 1, 1986. It was then when Siva became associated with Taib whom he found to be struggling with his ideas to develop the state and move towards a new frontier but sadly was obstructed by his uncle who wanted to influence his nephew on how the state should be run.

Thanks to these candid admissions, we thus learn from Mr Siva Kumar G himself how over his following years as a salaried newsman he “continued to have a consulting rapport with The Sarawak Tribune which had by 1990 become detached from the reigns [sic] of Rahman Yakub” and “continued to maintain his rapport with Taib and …. took part in Taib’s Politics of Development up till SCORE came in today”.

The journalist gushes at how friendly and approachable his political mentor was from the very start of their relationship. According to Siva Kumar G, Taib treated him ‘like a friend’ and made clear he would never tell him what to write especially about Taib himself – a claim that somewhat clashes with SKG’s earlier description in the previous paragraph of the stated purpose of the paper being to attack Taib’s hated uncle on Taib’s behalf.

In 1989 Taib commissioned him to write Taib, a vision for Sarawak, described by  ASEAN’s AEC News Today as “a 236-page tomb praising the career of Mr Taib as chief minister of Sarawak”, by then an established kleptocrat.  So, perhaps we should take Mr Siva Kumar G with a pinch of salt over his claims of independent objectivity?

We know from the same self biog that Siva Kumar G in 2008 turned to PR as ‘general manager and executive director of AsiaPR’, which describes itself as a strategic media relations company that, according to the Asia Times, creepily boasted of specialising in “covert public relations” (a claim no longer visible on its website).

Book number two about Taib Mahmud appears to have been AsiaPR’s main known enterprise… until in 2018 the company created a stir of controversy over in Cambodia as Siva Kumar G emerged under a changed identity as the media tycoon Sivakumar S Ganapathy, who bought out one of the country’s remaining independent newspapers the Phnom Pehn Post in his capacity as boss of AsiaPR.

It was not so long before that Siva Kumar G/ Sivakumar S Ganapathy had completed his second book about Taib and therefore the emergence as media tycoon appears to represent a considerable turn of fortune, perhaps reminiscent of the Governor’s former Bomoh (witch doctor) who unaccountably ended up as a major shareholder of the Sarawak timber giant Samling during its period on the stock market.

Which leads one to ask if an investor behind Mr Kumar and his colleagues at Osho Ventures might be none other than the Governor of Sarawak himself, hoping as ever to cash in on the exploitation of Sarawak’s coal wealth?

Taib, who is the owner of fleets of Rolls Royces, sports a cohort of bejewelled wives, daughters and sisters and has spawned a global property empire, has been unable to deny his wealth – without being able to legitimately account for it. He always uses others to invest on his behalf (although on occasion the mask has fallen).

Such an investment would certainly explain the announcement of the enterprise without apparent tender in true Sarawak style and the big publicity handily provided by the Governor’s own paper (edited by his daughter) designed to excite the population as to the benefits it will receive.

In 2018 Sarawak Report caught the old boy red-handed doing just that sort of thing with the state’s oil venture Petros, whereby a ‘joint venture’ company was attached to the enterprise that turned out to be owned by him.

To disguise that fact he placed one of the brothers of timber tycoon Tiong Hiew King as the public face of the company together with a little known nominee, however we established that Southsea Energy belongs to Taib and his son Abu Bekir.

Siva Kumar G may very well have another explanation for his ‘investment advisor’ status at Osho as opposed to that of a mere PR consultant and for his ability to swing investment opportunities in Sarawak, as well as for his tycoon style access to considerable funds to invest in buying up newspapers in a country like Cambodia (where Taib Mahmud has in the past shown interest in collaborating on his grand hydropower SCORE schemes) and in coal mining projects in Sarawak.

However, in the public interest, we would like to hear these explanations and Sarawak Report has sent him the following so far unanswered questions via the Phnom Pehn Post and AsiaPR emails and will publish his comment and reply if we receive it.  The Questions are these:

Q1 – You are known as a self-avowed long-term propagandist for Governor Taib Mahmud. Can you confirm or deny what is widely assumed, which is that he is the primary backer for your various investments?
Q2 – Is it fair to say that in enterprises such as the untendered granting of this latest licence to explore for coal in Sarawak you are acting as the link man for Taib with Osho mining and are essentially a front for his investment?
Q3 – If the above assumptions are not true do you accept that this is plainly how it looks, given your background as a humble sub-editor and writer for Taib and could you provide a comment as to how exactly you became involved in this coal project and raised the millions needed to buy the Phnom Pehn Post?
Q4 – Your latest book praising Taib Mahmud announces various ‘sponsors’ for the publication – all of which are large companies considered cronies (the receivers of large contracts) of Taib Mahmud.  Could you explain in what way they acted as ‘sponsors’ and how much much you received from these companies to write a book praising Taib Mahmud?

The above ‘sponsors’ are acknowledged in Siva Kumar G’s book about Taib Mahmud. 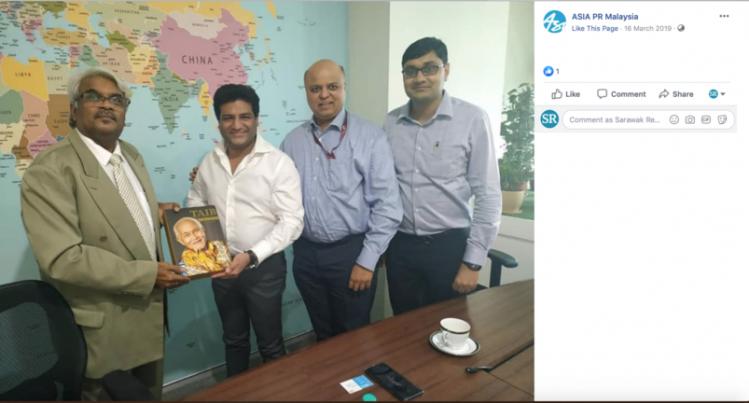 AsiaPR man, Siva Kumar G, presenting a copy of his Taib hagiography to his new friends at Osho mining back in March 2019