According to a writ lodged in the KL Sessions Court last week, Economics Minister Azmin Ali, who is also Deputy President of Malaysia’s biggest parliamentary party PKR, ran up a staggering travel bill of over RM300,000 ringgit, mainly for private family trips, in the course of just six months this year.

Also listed in the claim brought by his travel agency for alleged unpaid costs, is the bill for what has become a notorious visit to Sandakan in May (leaving KL on 10th and returning 11th) during which Santubong Youth PKR Chief, Haziq Abdullah Abdul Aziz has claimed he was filmed having a sex session with his senior party boss at the Four Points Hotel.

The material, which Azmin says is fake and a smear, has been widely distributed on WhatsApp. Police investigators say they have not proven its authenticity and are conducting a probe into who was guilty of circulating the intimate hour long video.

What is not in dispute is that Azmin Ali was campaigning in Sandakan at that time and the travel company, who say they arranged his flights, are now suing him for non-payment of this and an extensive list of other travel services, following what they say have been numerous requests for him to honour the bill.

Perhaps more noteworthy than the apparent failure to pay for a return local flight, is the staggering size of the over-all bill of over RM300,000 that the company, YHA Travel & Tours, alleges Azmin ran up in the course of just six months for flights alone, which they claim he has never disputed.

They say he has merely refused on this occasion to pay it:

Despite repeated demand of payments by the Plaintiff and/or its representative from the Defendant and/or his representative, the Aggregate Amount has not been forthcoming even though the claimed sum was never disputed.
[Par 12 – writ WA-B52NCvC-505-11/2019 KL Sessions Court] 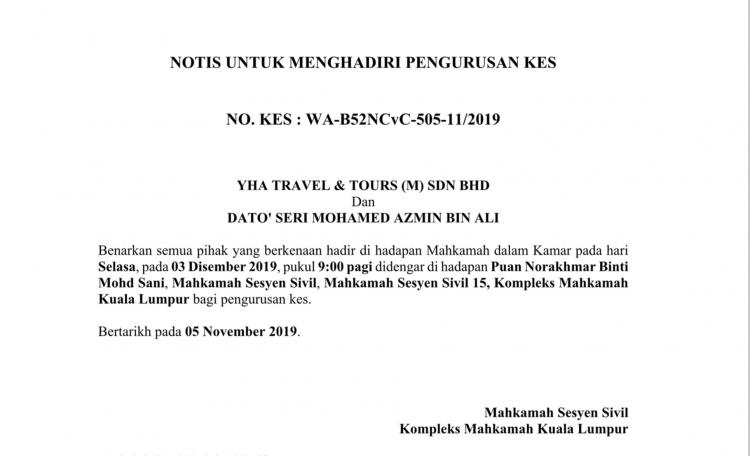 The writ continues by saying this has broken an established pattern by which Azmin (described as a frequent traveller) would arrange to pay or send a representative to pay bills much more promptly:

Due to the frequency of their travels, and by mutual understanding between the Plaintiff and the Defendant, payments have always been made and/or arranged by the Defendant and/or his representative every 1 to 6 months….
However, in this instance, the payments have been outstanding for far longer than the aforesaid time frame.” [Pars 9-10]

The Economics Minister, who is seen as a contender seeking to leapfrog his boss in the succession to the top job, has merely listed his ministerial salary (RM50,000 per month) and a house worth just over one million ringgit in the declaration of assets that all elected parliamentarians are now required to submit under new laws.

Under the circumstances it is therefore hard to understand how he ran up such enormous  outstanding sums with a view to being able to meet the bill – many of the flights are for family members, who appear to have travelled business: 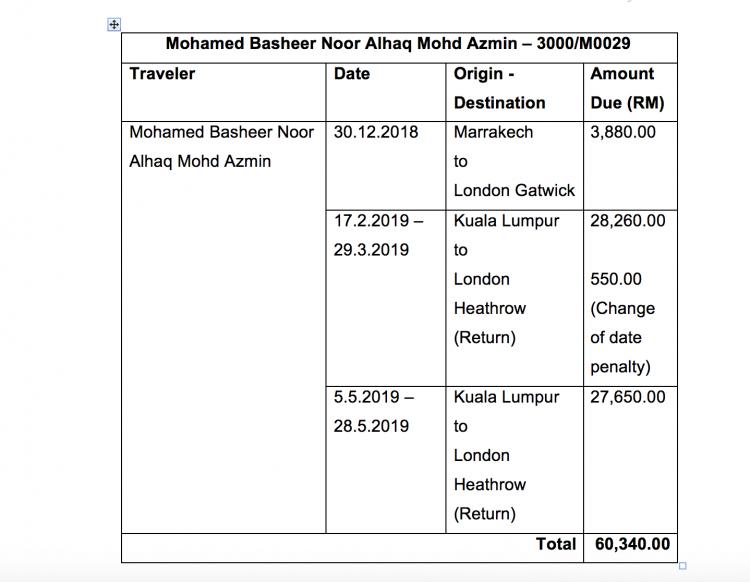 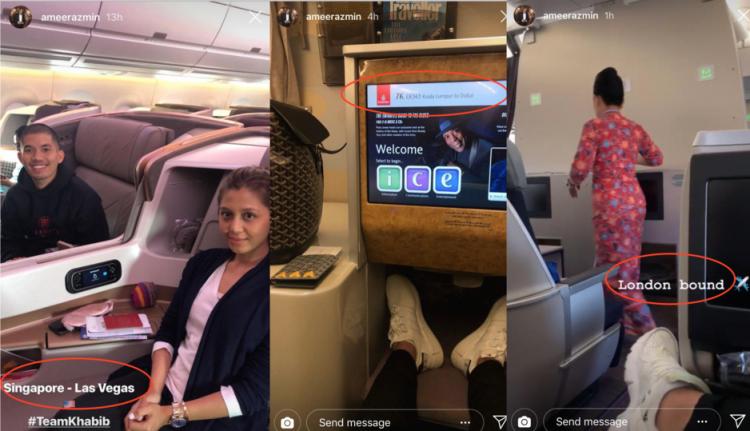 One prolific traveller is son Ameer, apparently funded by his Dad, who has posted many of his experiences on Facebook. These earlier trips prior to the bill in question included KL to Dubai, Singapore to LA and ‘London Bound’ in 2018

See the full list of travel laid out in court:

According to the figures laid out in the claim Azmin ran up the RM300,000 between last September and June on what appear to have been a series of business/first class flights for various members of his family across the world.

They include a New Year’s break in Morocco that became widely reported after it emerged the Azmin family spent time at a luxury resort together with a senior political rival, ex-Defence Minister Hishamuddin Hussein, who is the cousin of disgraced ex-PM Najib Razak now facing multiple charges over 1MDB. 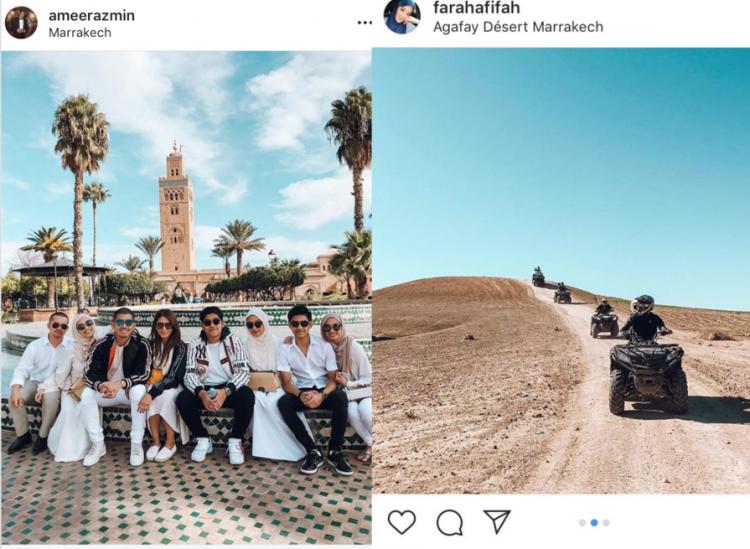 Athough all of Azmin’s six children are now adult the minister continues to pay for them and spouses to join him on holiday, according to the billing laid out in the statement of claim. Sarawak Report has enquired as to whether the Minister expects them to pay him back and if so how?

Including interest, the travel company says it is now owed RM328,901 plus damages and costs largely run up by the Azmin family’s leisure trips: 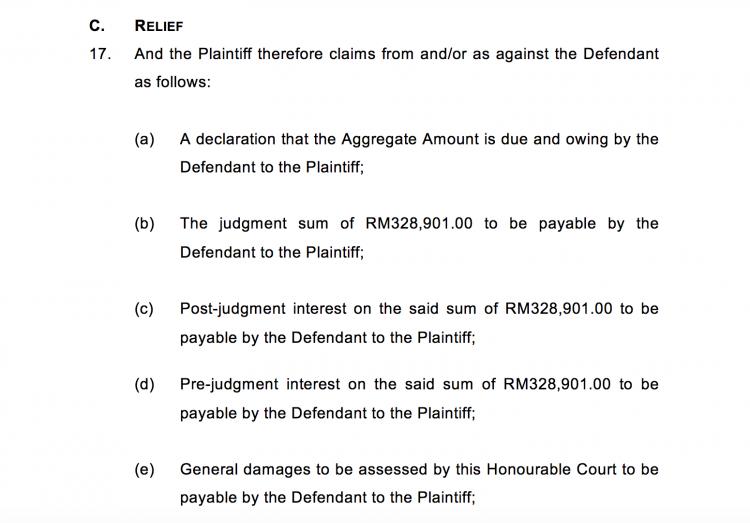 Nearly Rm100,000 (RM92,280.00) of the total bill appears to have been run up in flights enjoyed by the minister’s newly-wed son Mohamed Ameer Shazrin Mohamed Azmin and his spouse Mazreen Shanim Shaheen during their travel to Marrakech, London and Geneva.  The lavish wedding ceremonies of the couple and that of another sibling were society high points in KL over recent months. 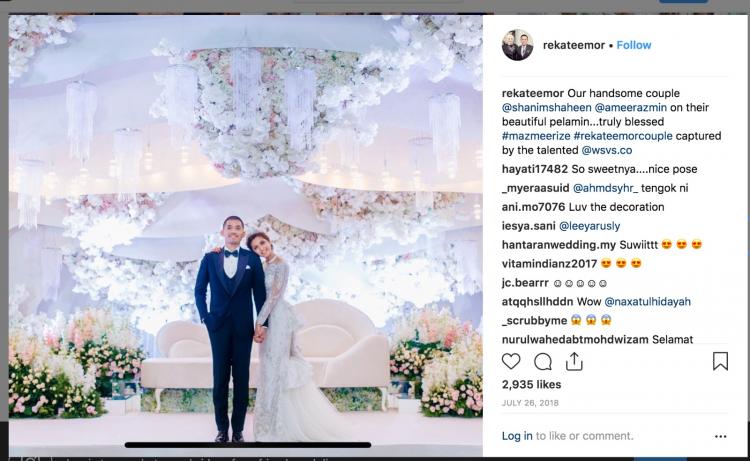 The bill does not include hotels and other expenses involved in the trips, which raise concerns about further potential costs. Azmin is known to favour London’s top hotel Claridge’s when he comes to the UK (where he has frequently come to visit his children), which costs around RM4,500 a night according to online booking sites:

Son Mohamed Ameer Shazrin Mohamed Azmin’s Facebook postings over the past couple of years have revealed he also has expensive tastes. 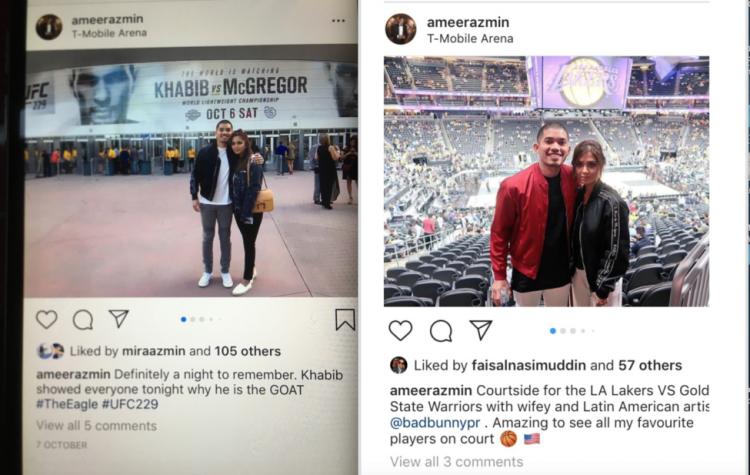 He in the past uploaded a plethora of pictures boasting himself in first/business class cabins, wearing large quantities of designer clothing, enjoying top global holiday destinations, five star restaurants and expensive tickets to international sports events. These have been removed in recent weeks according to followers. Whether the family funded the items or whether they were gifted (and if so by whom) was not detailed.

The pattern extends to other children in the family. According to reports, another daughter boasted on Facebook about her seat 1A (premier class) on a flight to London as recently as September before pulling down the posting. The designer outfits and accessories boasted by the family over the years has caused criticism on social media: 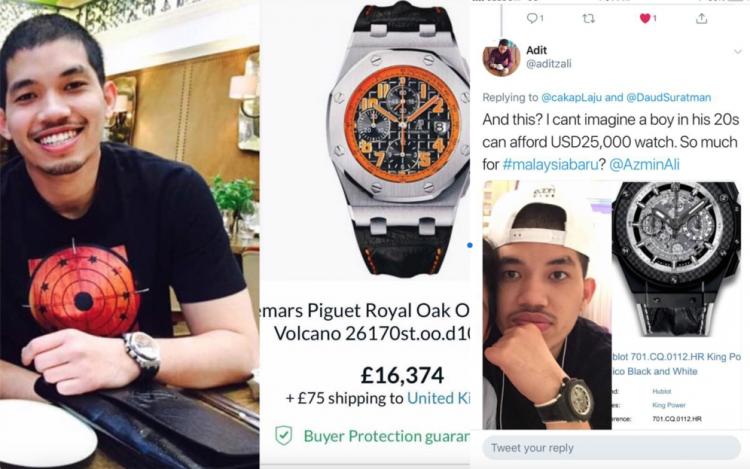 Sarawak Report has forwarded a request for comment on this matter to the Economic Minister’s office, asking if he confirms the travel bills cited in the writ are genuine and undisputed, as claimed, and if so how he had planned to pay the bill?

Whatever the reason for Azmin’s alleged failure to pay this latest bill, the writ makes clear the travel firm claims a long relationship with this client going back twenty years, which now appears to have broken down:

In the past Azmin had paid up in reasonable time, the travel film claims.  There is no indication as to whether the scandal that broke out over the Sandakan trip, one of the last items listed on the bill, is in any way linked to the sudden dispute with the agency.

However, in order to establish whether the RM300,000 bill was especially high or an abberation, Sarawak Report contacted YHA and has learnt there is believed to be nothing unusual in the scale of the sum spent on travel by this client compared to other bills in recent years.

Our informantion is that the minister’s travel bills have been in the region of one million ringgit annually and that these have been settled in the past by a regular third party envoy, who paid the KL office in cash.

Sarawak Report has requested confirmation from the minister about the role of the individual named as the intermediary for these cash settlements and for his own comments on the matter.