Yet another major bank willing to accept Jho Low’s tainted 1MDB cash has now been unmasked, the Bank of Cyprus.  The present US Commerce Secretary Wilbur Ross was Vice Chairman at the time.

Today’s part two of the expose by the Cypriot paper Politis not only describes in detail how Jho Low’s agents, the ‘citizenship monger’ Henley & Partners, roped in the Archbishop of Cyprus to write to ministers urging them to provide a passport to the fugitive, it raises serious concerns about apparent lack of checks on the money Jho Low lodged at the bank.

According to the paper the money ought to have been first routed through the Central Bank for screening, but was not. It is even implied that at least a portion of the money may have been deposited in cash.

There are, in fact, serious questions about the 5m euros invested and how they went into the banking system in Cyprus. The investment program stipulates that all financial transactions required to make the investments .. should be conducted through Cypriot banking institutions. The purpose of this obligation is to ensure that all incoming funds as well as interested parties pass the money laundering checks carried out by Cypriot banks. These audits are based on the relevant instructions issued by the Central Bank of Cyprus. In order to ensure the application of this provision, applicants are required to include in their application copies of remittances. It is considered to be unacceptable that investments made by cash transactions be accepted. [Politis]

What is certain is that if the Bank of Cyprus had carried out its own basic screening it would have arrived at the same conclusions as the Thompson Reuters check conducted by Henley & Partners that Jho was a serious risk for fraud and money laundering and a politically exposed person. However, neither Henley nor the Bank of Cyprus appear to have been deterred.

Today the Cypriot authorities have stated they are preparing to revoke Jho’s passport, issued in September 2015 after the Archbishop of Cyprus sent two letters urging the Council of Minsters grant the passport as investments in church land had been promised. The government has also said it will review the provisions in the present law on granting passports to foreign investors in the light of the scandal.

However, there remains the question as to why the Council of Ministers agreed at the time to keep the granting of this passport secret at the height of the 1MDB affair?

Island entities such as Cyprus, Malta and St Kitts & Nevis (from which Jho Low obtained yet another passport) have been top targets of Henley & Partners, which boasts itself to be the ‘global leader in citzenship and residence planning‘ for the super-wealthy, since their passports are good for visa free travel in areas of the world such as Europe and the UK.

Companies such as Henley have been influential in persuading such jurisdictions to adopt citizenship for investment schemes, enabling them to push super-wealthy but often highly dubious clients like Jho Low through the process for a fat fee. It is high time their activities were investigated for providing passports to criminals who would not pass muster in less lax jurisdictions.

As Politis also points out, the Cypriot regulations also require a certificate from the applicant’s place of origin, in this case Malaysia, to declare a clean criminal record, leaving questions as to whom was to blame for the failure to spot the stains on Jho Low’s copybook?

Did Cyprus fail to obtain the certificate and turn a blind eye? Did Najib’s government in Malaysia decide to provide such a certificate to the wanted fugitive, even though investigations into 1MDB were ongoing from the spring when Jho Low applied for the passport till September 2015 when it was granted? Or did Jho Low’s other passport issuer St Kitts & Nevis (where it is believed he never set foot) provide the clean criminal record sheet?

Malaysia should be interested that a sizeable chunk of assets remain unclaimed on the island, which plainly belong to 1MDB. Meanwhile, according to the latest statements from the IGP, it appears that Jho Low has now altered his face to that of a panda as he hides out in China, where the authorities are apparently claiming he is now too heavily disguised  for them to manage to arrest.

Perhaps he can eventually hop back into Malaysia on the East Coast Rail Line that he facilitated as part of a 1MDB related kickback deal when China finally completes this prized strand of its global transport strategy? 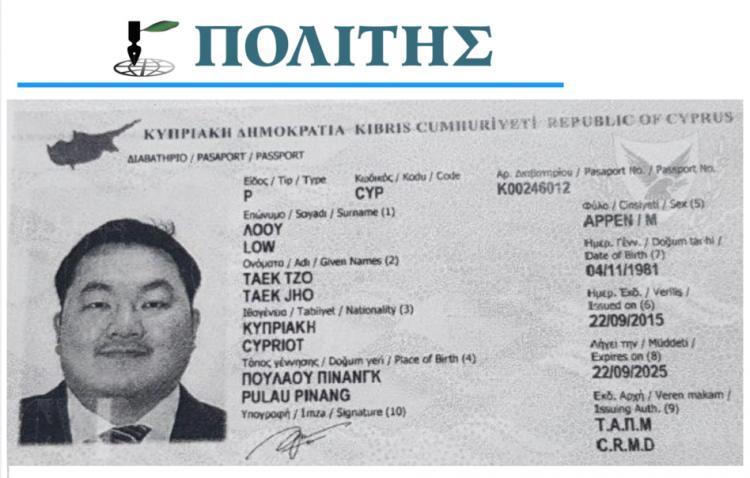 Signs of plastic surgery already with the 2015 Cypriot passport?