Sarawak Report has viewed further documents that have so far remained hidden from the public relating to the disposal of Maika Holdings assets by supposed corporate ‘white knights’ deputed by the former government to ‘bail out’ the struggling fund.

The ‘rescue’ back in 2010 included a promise that any profits from the disposal of the company’s assets would be distributed amongst some sixty six thousand original shareholders of the fund – mostly members of the Malaysian Indian Congress party, linked to BN, who had received a paltry return on their investments over several years.

These papers indicate that in recent weeks liquidators have expressed acute concern that huge sums of cash arising from the sale of those assets went to the wrong place, namely a company owned by one of the said ‘white knights’ G Gnanalingam, instead of Maika Holdings itself (in order to be distributed to shareholders as was promised). 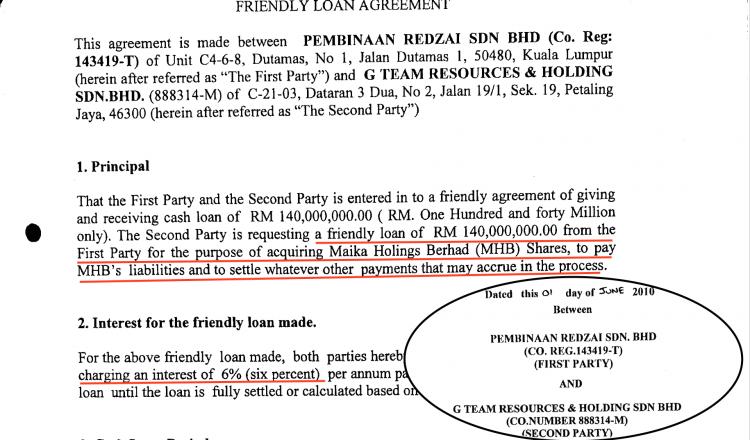 Loan at the centre of the dispute was from one of Mr Gnanalingan’s companies Pembinaan Redzai Sdn Bhd to G Team Resources & Holdings Sdn Bhd, which he set up to buy out Maika Holdings

Sarawak Report understands that the matter has now been referred to the police and MACC investigators, following a series of legal interchanges between the liquidators and G Gnanalingam viewed by Sarawak Report.

At the heart of the issue is what liquators described in a letter dated as late as September 4th of last year as a “huge mistake” on the part of previous managers of Maika Holdings, whom they say “wrongly transferred” the staggering sum of RM145,753,073.28 to Gnanalingam’s company Pembinaan Redzai Sdn Bhd, which had advanced a loan of RM140 million to buy out Maika shares.

The company that received the loan, G Team Resources & Holdings Sdn Bhd, was also owned by Gnanlingam and was the entity authorised by Maika’s board (with the blessing of the government) to buy up the majority of Maika shares in 2010 as part of the ‘bail out’ plan for the floundering fund which was failing to pay dividends to its thousands of modest shareholders and had stopped producing accounts.

G Team used the RM140 million to buy out the majority of those ordinary shareholders, offering them just 80% of the original share price they had paid in for when the fund was launched in the 1980s at RM1.00 a share.

Publicly, Mr Gnanalingam, the board and the government made clear that any later profits to be raised from the sale of the fund’s remaining assets (most particularly a slice of land and a profitable insurance company) would subsequently also be returned to the self same original shareholders.

This was because Gnanalingam had been appointed to the task, without the discussion of other options or tenders, on the basis that he was acting as a “trustee” for the benefit of the shareholders only:

However, according to the letter sent by the liquidator, when the majority of the insurance company Oriental Capital Assurance Berhad (OCA) was indeed sold to Tune Insurance Holdings (part of the Tony Fernandes controlled group of companies) the above sum of over RM145 million was then transferred by cheque straight back to Pembinaan Redzai Sdn Bhd as an apparent repayment plus interest – rather than to Maika itself for proper distribution. 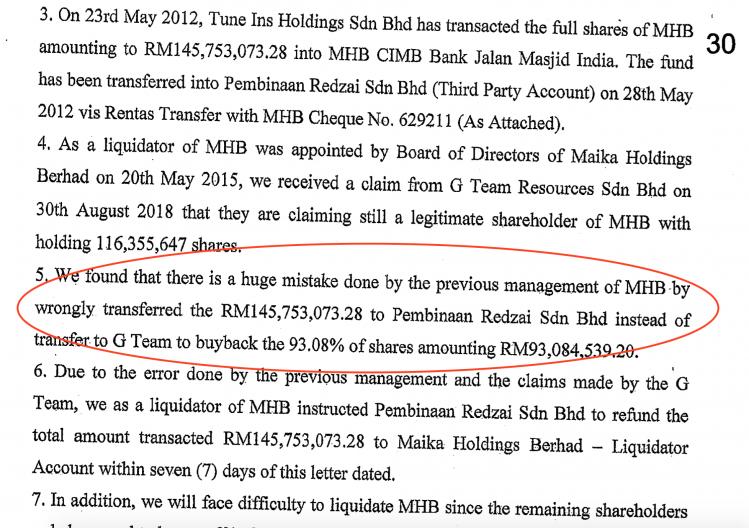 Letter from the liquidator to Gnanalingan as owner of Pembinaan Redzai

It appears that Mr G Gnanalingam has refused to comply with the requests of the liquidators to rectify the “huge mistake” made back in 2015, which clearly meant that what profits there were from the sale of the insurance company to Tune were not distributed as was the declared intention.

There is another problem linked to this thorny issue, as several commentators have pointed out, which is that the valuation of the insurance giant at the time of that hasty sale appears to have been woefully underpriced. Tune Insurance (comprising mainly OCA) was floated a year later after the sale in 2012 for a hundred million dollars soon amassing a market capitalisation of RM1.2 billion.

That meant vast profits for Tune and G Team, which retained shares. It is understood that family members of Mr Gnanalinghan had also been absorbed onto the board of Tune Insurance.  However, none of these profits went towards swelling the miserable pay out originally provided to the ordinary shareholders.

A separate issue linked to the list of concerns surrounding Maika’s unusual ‘bail out’ relates to the disposal of money owed to some 5,800 shareholders of the fund (6.9%) who did not claim their pay out.  The approximately Rm7 million owing to them was not paid over to the public exchequer via Bank Negara, as demanded by the law, according to information available to the liquidators.

“It cost some RM79 million to pay off the shareholders” says one source, who has researched the documents passed to the MACC, “yet some RM179 million was raised from the land sale and the sale of OCA. It means certain entities kept over RM100 million”.

And that was before the floatation of OCA.