C4 is a phrase with many red button crime and corruption connotations in Malaysia. It was the name of the military explosive used in the high-profile murder of Altantuya Shaariibuu and is also adopted by a prominent anti-corruption NGO (Centre to Combat Corruption & Cronyism – C4).

Separately, the China Communications Construction Company (CCCC) is the name of the Chinese state-controlled construction company, which Sarawak Report exposed back in July 2016 for being at the heart of a corrupt and secret deal to write off debts and liabilities on behalf of 1MDB and fugitive financier Jho Low.

So, it seems astonishingly brazen that this same Chinese C4 has now teamed up with the family company of Sarawak Governor Taib Mahmud in order to bid for lucrative contracts in the state – except that of course C also stands for CMS, the company concerned.

On 4 March 2019, Cahya Mata Sarawak Berhad (CMS), which is controlled by the Taib family, announced to Bursa Malaysia the incorporation of a new joint-venture entity known as PPES Works CCCC JV Sdn Bhd.

On 13 March 2019, just over a week after it was incorporated, the JV was handed its very first contract by the Sarawak state government. The contract in question involves the construction of a bridge crossing in Bintulu for RM466.68 million. News reports suggest that this is just one of many contracts that CMS/CCCC plan to bid for under the Sarawak Coastal Road Network and Second Trunk Road projects in the GPS-controlled state of Sarawak.

Indeed, PPES Works itself represents a clear demonstration of how private Taib family business interests are intertwined with public institutions in Sarawak, which has to all intents and purposes been run for the economic benefit of the Taib family for the past several decades.

The company is partly owned by CMS and partly owned by the Sarawak Economic Development Corporation (SEDC), the body in charge of promoting economic development in the state. Unsurprisingly SEDC’s Chairman is Taib’s own brother-in-law, Abdul Aziz bin Haji Husain. 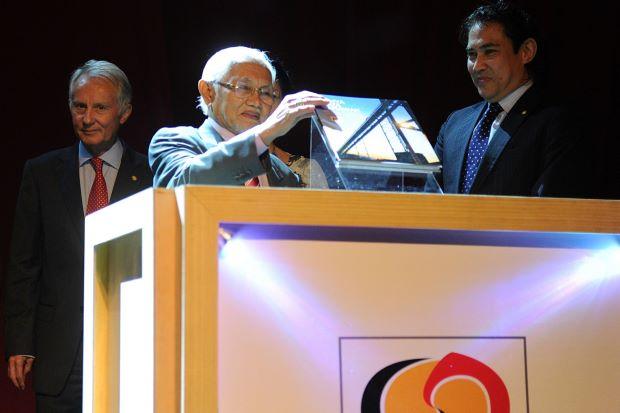 CMS has over the years notoriously taken advantage of Taib’s position as Sarawak’s former Chief Minister and current Governor to cream off hugely profitable state contracts including the construction of the Sarawak Legislative Assembly building, the Borneo Convention Centre, Kuching’s Darul Hana Bridge and numerous contracts under the Sarawak Corridor of Renewable Energy (SCORE) and the Pan Borneo Highway.

The conglomerate is also reportedly set to profit from the commencement of the Sarawak Highway and Second Trunk Road projects as well as the new Baleh Dam project in 2020-2021. CMS is the sole producer of cement in Sarawak and an open and transparent tender process for contracts is rarely followed.

But possibly most concerning in this context are the links between the buyout of UBG (the bank formerly owned by CMS), Jho Low and 1MDB that were highlighted by Sarawak Report way back in 2015. To date, no official investigation into this issue has commenced.

So why should Malaysians be concerned about this latest CMS business venture?  In 2016, Sarawak Report published the secret agreement that lay behind the sudden inflation of the budget for the East Coast Rail Link to double the original proposed cost of $30 billion. The secret deal with CCCC laid out in clear detail how the repayments on the debts owed by 1MDB were to be concealed through those inflated figures.

The Chinese government had effectively underwritten the corrupt deal, offering Najib a 2% loan and various up-front incentives after Najib’s fugitive proxy Jho Low negotiated the terms on his behalf in Beijing. And, as the figures showed, Jho Low had taken care to look after himself in the process by using the deal to offload his shares shares in companies he had originally bought using 1MDB’s stolen money.

Najib and his ministers, including then Public Works Minister, Sarawak’s Fadillah Yusof (brother to Bustari Yusof a key collaborator of Najib and major recipient of money diverted from 1MDB) at the time claimed the story was nonsense.

However, within just a few weeks Najib had visited China and signed off on exactly the contract terms that had been leaked to Sarawak Report for the now massively expensive rail project that experts predicted could never be made profitable for Malaysia.

Post May 9th Malaysia’s new government suspended the East Coast Rail Link and has launched major investigations into the exact self-same corrupt terms and conditions provided by CCCC and exposed by Sarawak Report.

Yet the CMS group’s Chief Executive, doesn’t seem to be alarmed by CCCC’s involvement in the 1MDB/Jho Low bailout as he sets out on a new joint venture with this company at the centre of a corruption probe by the Malaysian government.  Neither has he expressed concern that the World Bank has also banned CCCC owing to separated but similar corruption issues elsewhere. Instead,  he has hailed the new CCCC/CMS partnership, citing the ‘uniting of two great companies’ for the benefit of Sarawak.

“I’m sure the partnership with CCCC (M), given its distinguished portfolio and past achievements, will be of great value to PPES Works as the two great companies unite to bring about a more connected and rapidly developing Sarawak.” – CMS Chief Executive Goh Chii Bing

Doutless the former CEO, British citizen Richard Curtis, also applauds the deal. For years he steered the family concern’s lucrative path as it benefitted from generous ‘negotiated’ (i.e. untendered) contracts handed by the state government. He remains a non-executive director on the CMS board.

Sarawak Report on the other hand suggests that the Malaysian Anti-Corruption Commission (MACC) should commence an investigation into the CCCC/CMS partnership. How much integrity and accountability do these two companies have, considering the individuals involved and their track record?