What About Goldman's Deals In Sarawak?

The full, disgusting extent of ingrained political corruption under BN continues to be displayed as more of the most prominent and vocal defenders of that regime are being rounded up to answer charges of theft and graft before the courts.

The more loudly they condemned others and defended Najib, the more it seems they had their hands in the till, greedily selling off public lands and contracts as fast as they could fill their pockets.

Najib had announced he preferred loyalty over competence in public office, but that loyalty clearly came at a price and it was members of the public who were being forced to pay it. 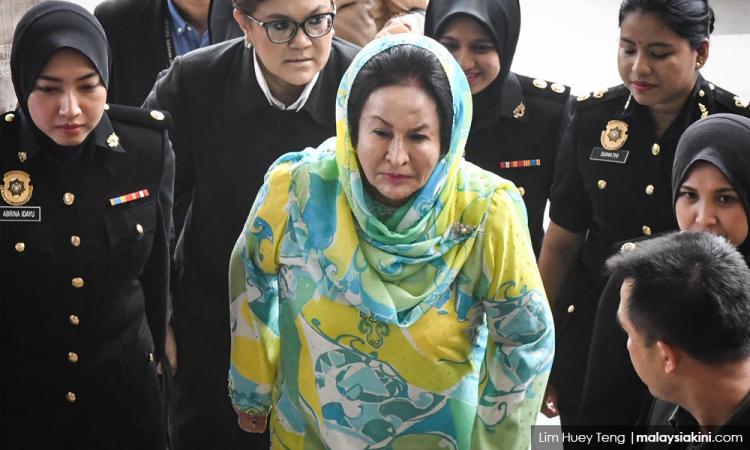 In the case of Sarawak and the latest solar project scandal (first revealed by Sarawak Report shortly after the election) it is school children who have suffered as Najib’s wife Rosmah sought to grasp a huge RM187.5 million chunk of a public contract that she and her cronies managed to divert into the hands of a totally unqualified contractor, purely to get the kickbacks.

Kids and their teachers as a result found themselves without electricity for much of the day in affected rural schools, as the fat greedy wife of the prime minister stuffed yet more cash into her various bank accounts.

Her loudest defender, her personal PR man, Rizal Mansor, was busy trying to get his own RM25 million out of the schoolchildren’s money, according to the charges laid today before the court.

Around them other senior members of UMNO, including the former Secretary General, have also been pouring into court for pilfering millions, which they plainly felt was only their rightful due, so corrupted was their view of ‘service to the nation’.

Yet, while the spotlight is on Sarawak, it merits a reminder that the other grand court drama related to 1MDB is unravelling in the United States with bankers from Goldman Sachs in the sights of the Department of Justice.

That ex- Southeast Asia boss, Tim Leissner, has pleaded guilty to engaging in a conspiracy to thieve billions from the fund and bribe Malaysian officials (including Najib and his wife) is widely known thanks to the publishing of his confession to the court this week.

In his confession he pointed a finger straight at Rosmah and also several as yet unnamed officers at the bank, whose lawyers will be scrambling to portray Leissner and his colleague Roger Ng as lone rogue operators:

“…with the intent to benefit Goldman Sachs and myself, as an employee and agent of Goldman Sachs, I entered into a conspiracy with those individuals identified in the Government’s information to pay bribes and kickbacks to obtain and then retain business from 1MDB for Goldman Sachs. Including the person identified as …. Co-conspirator No 1 [Jho Low]….. For Instance, I knew that funds derived from Project Magnolia, specifically mentioned in the information, would be diverted to me and others, including government official, through shell companies beneficially owned and controlled by myself and others in U.S. dollars, and those financial transactions would be processed through the United States.  I knew that the use of shell companies in these fund transfers was designed, at least in part, to conceal and disguise the  nature, location, source, ownership and control of the diverted and the stolen funds.

The following is one specific instance involving the movement of funds: On or about October 10 2014, I caused approximately $4.1 million to be wire transferred from a foreign bank account controlled by myself and another individual to the U.S. bank account of a New York jeweller in part to pay for jewellery for the wife of a Malaysian government official. I understood that this payment to the New York jeweller was intended to benefit the Malaysian government official and his wife in order to influence them government official to take official acts that would help provide 1MDB business to Goldman Sachs, for the benefit of Goldman Sachs and myself.

Leissner and his colleagues are being charged over the $6.5 billions raised in bonds for 1MDB.  However, before that in 2011 these same Goldman Sachs bankers were busy raising a separate off-shore bond for then Chief Minister of Sarawak Taib Mahmud to the tune of $1.6 billion, ostensibly to fund Taib’s SCORE (‘Corridor of Renewable Energy’/dam) programme.

Qute rightly Malaysia’s new leaders are demanding the staggering $600 million Goldman charged in fees back for a bond that Leissner has already admitted was a hugely expensive and unnecessary method of raising money for the alleged purposes in hand. They should also demand the bank repays the $6.5 billion plus interest as a penalty for its collusion with the corrupt former prime minister of the country.

In fact, Malaysia ought to withold surrendering Roger Ng, whose extradition is now requested by the United States, until it has negotiated a satisfactory agreement on the matter. The US needs to discipline its rogue bankers in a way that hurts (fines and jail sentences) and Malaysia needs its money back.

But, this case must not stop here, any more than the wave of investigations and arrests prompted by the MACC should stop at the borders of Sarawak.  The biggest thief is still sitting on his throne in that state and much of the state budget has remained a disgraceful secret over many years, including the destination of all the money raised by Goldman.

The Equisar bond, raised off-shore in Labuan, through a number of unusual instruments was one of Tim Leissners’ first big government commissions for Goldman Sachs. His key partner in these crimes, Jho Low, was already very much on the scene in Sarawak by that time, having gone into business with the Chief Minister’s own family company UBG, in which he had taken a 50% stake back in 2008 under the guise of heading a team of foreign investors in his so-called Abu Dhabi, Kuwait, Malaysian Investment Corporation (ADKMIC).

It is time to lift the lid on what they were all really up to with this shadowy bond, paid for by taxpayers at once again well above the market rate for borrowing. The purge needs to extend to Sarawak, where the story of super-graft finds so many of its original roots.