The US nightclub chain Hakkasan has already created gasps around Vegas for the extraordinary high fees it pays to its celebrity DJ’s – amounting to over $400,000 an appearance in certain cases.

However, that pales into insignificance compared to the enormous one-off ’emolument’ paid to an unnamed director in the latest accounts for June 2016-17, just posted nearly six months late in the UK’s Companies House.

The night club chain lays out in its accounts that its payments to directors went up from a total of $2.2 million in the previous period of 2015-16 to a total of $54.4 million with a staggering $50.5 million going to just one person, the highest paid director. 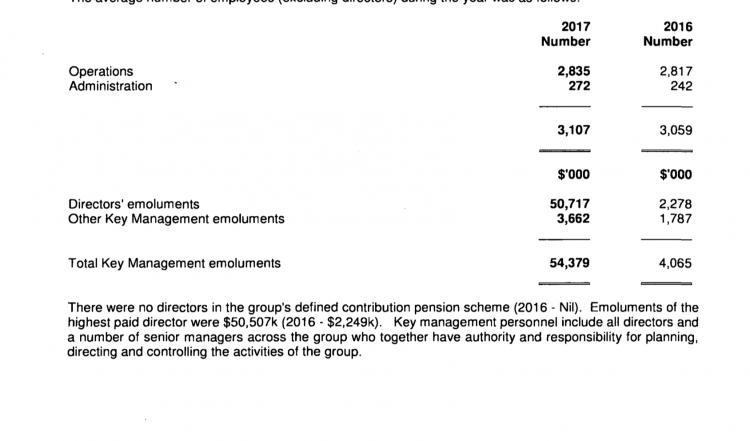 Hakkasan’s $50.5 million emolument to its highest paid director (page 28 of its annual accounts)

What seems notable about this decision to pay a whopping amount for directorship services is the fact that the company’s accounts show a lamentable performance in terms of profits for the period concerned.

Turnover went down over the period by 7%, according to the accounts, to $313.6 million. This compared with administrative expenses of $413.7 million, resulting in an operating loss of over $138 million.

Sarawak Report has followed the fortunes of America’s fastest growing nightclub and hospitality business since it blasted onto the scene in 2012 and then went global, owing to the links to previous owner and chairman Khadem al-Qubaisi (KAQ), no in detention in Abu Dhabi over thefts from 1MDB.

This blog established that over half a billion dollars in back-handers went from 1MDB into KAQ’s Edmund de Rothschild Banque Privee between 2012 and 2013, a matter presently the subject of major investigations in Luxembourg. However, Hakkasan’s management have always maintained that injections of finance into the company were securely ‘ringfenced’ from any of 1MDB’s stolen money, including a multi-million dollar shareholder advance.

Sarawak Report has nonetheless established there were clear ties between the various elements of KAQ’s financial empire and identified a ten million dollar payment from his Luxembourg VASCO trust into his company Tasameem Investments, which in turn owned Hakkasan.

Following such exposes KAQ resigned his directorship and chairmanship of Hakkasan, along with two fellow directors, in April 2016 to be replaced by three Abu Dhabi citizens as well as former Republican senator and lawyer with Hogan Lovells, Norm Coleman.  Coleman resigned in January of this year and has announced he is battling cancer.

Who received the $50 million and why?

It leaves interested by-standers to consider which of the potential recipients of the emolument, including Norm Coleman, received such a whacking amount of money from the failing company and why?  The remaining directors, all appointed in April 2016, are identified as Khaleefa bin Butti, Hanni Buttikhi and Ramez Attieh.

Another former Director, British citizen Neil Moffit, resigned in April 2017 within the period of the accounts. * update – The Telegraph reported Aug 26th that the payment was indeed a golden handshake to departing CEO Neil Moffitt.

An advertised merger with a separate chain SBE did not eventuate and just last month one of Hakkasan’s outlets in Dubai closed its doors.

The payout came despite a difficult year of trading for Hakkasan, which ­caters to a high-rolling clientele in London and Las Vegas, including through its eponymous Michelin-starred eatery and the Yauatcha dim sum chain. Abu Dhabi-owned Hakkasan shouldered losses of $145m in the 12 months to June 2017 – equivalent to almost half its turnover and well above the previous year’s $56m deficit.

Revenues fell 7pc to $314m, including an 11pc drop in the UK, where it was affected by the poor performance of its fine dining concept restaurant HKK, which has since been shuttered.

Originally from Coventry, Mr Moffitt made his name after moving to Las Vegas, where he started nightclub operator Angel Management Group. He took the reins at Hakkasan in 2013 ahead of a merger of the two firms the following year, but stepped down last May.

The company’s former chairman Khadem al-Qubaisi was arrested in 2016 as part of investigations into the embezzlement of funds from Malaysia’s sovereign wealth fund, known as 1MDB. Hakkasan maintains it was not a recipient of any such funds.

A spokesman for Hakkasan did not return requests for comment.