In the light of paperwork viewed by Sarawak Report it behoves Malaysia’s Inspector General of Police (IGP) to make a clear statement as to just who agreed to pay for the attendance of a swathe of Asia’s top cops invited to his daughter’s wedding on July 1st?

The wedding itself was by various accounts lavish, but perhaps a career at the top of  Special Branch and the Royal Malaysia Police Force enables sufficient savings to be made.

What is provoking questions is a series of invitations that are understood to have been sent out to several of the IGP’s most senior counterparts in South East Asia from his official headquarters in Bukit Aman.

Sent on the 6th April (a month before the election) the email is entitled “Wedding Reception of the Honourable IGP’s Daughter” and begins with the words “Greetings From The Royal Malaysia Police”.  It then goes on to extend the invitation from Fuzi to the invitee and their wife* to the various high ranking police officers to the event being held at the One World Hotel in Banda Utama. 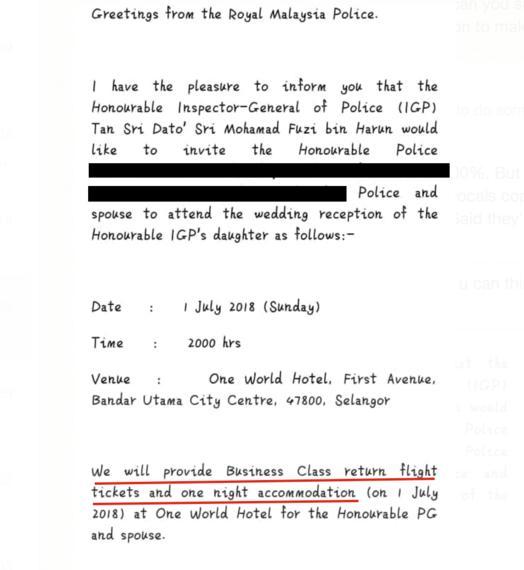 Plainly, it is unusual and outside the normal rules for official staff (the Chief of International Relations, IGP’s Secretariat, Goh Boon Keng, signed off the letter)  to be employed to extend such invitations to a private family event.

However, the correspondence appears to have gone further still in that it states that “we” will provide Business Class return tickets for the police chief and his spouse, as well as a night in the swanky hotel.

Given that the sender of the letter is the Royal Malaysia Police there is a strong implication that the police force and not its boss would be footing the bill. This would appear to be an extremely poor example to be setting for people lower in the ranks in terms of misdirecting funds.

Indeed it appears almost as unjustifiable as the Italian ‘training trip’ led by the previous IGP, where a large group of senior cops appeared to gallivant around Rome and other tourist spots, on an all expenses 5 star hotel jaunt, together with their wives.

So can IGP Fuzi, detail how many top foreign cops were invited to this family wedding; how many attended; how much each cost to entertain and who paid?  Naturally, proof of payments should also be made public.  We hope it was a happy wedding. 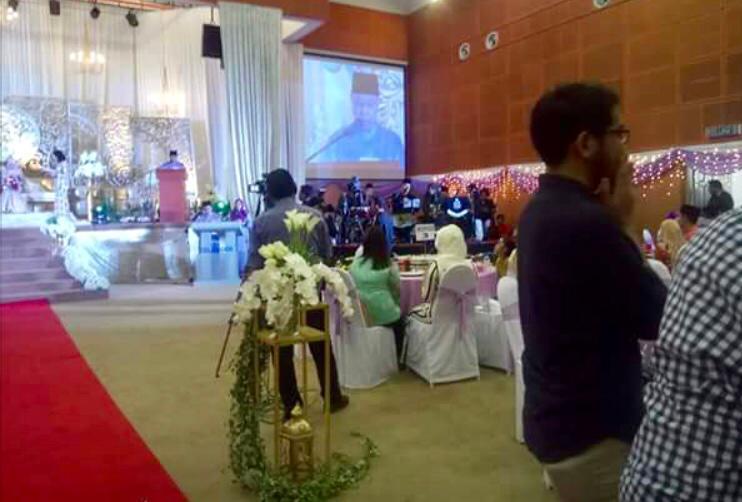 * note: a type error has been highlighted – the invitation was from Fuzi to the invited police officer and his wife, not from Fuzi and his wife (as the document makes clear).