In the alternative reality known as Malaysia, the Prime Minister and Government continue to insist that no money was taken from 1MDB and that there was no wrong-doing whatsoever.

Meanwhile, over in the United States the wheels of justice have been cranking on and today Najib’s own step-son Riza Aziz admitted to his guilt by settling the Department Of Justice’s asset seizure demands against his movie company. He has agreed to hand over US$60 million from the company he owns, Red Granite Productions, which made Wolf of Wall Street.

That asset seizure was based on an FBI investigation, which showed that the film and others had been funded by money laundered in the United States, which were the proceeds of crime, namely theft from 1MDB.  Criminal proceedings will follow and Riza Aziz is named as one of those under investigation.

So, there we have it. The Prime Minister of Malaysia denies it, yet his step-son has admitted it …. and paid up.

Meanwhile, let us be clear, Riza’s Hollywood mansions and those of Jho Low, the yacht, jet, New York apartments, grand master paintings, diamonds etc all remain on the asset seizure list and the DOJ are presently moving on these as well (unreported by the Malaysian media) at the same time as pursuing the criminal investigations that lie behind them. 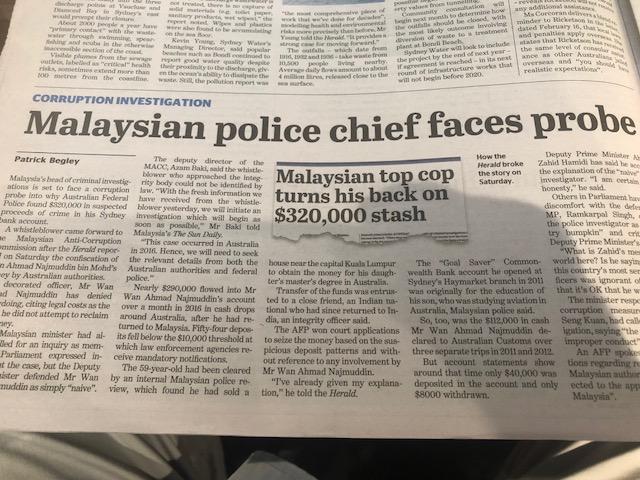 Meanwhile, on the other side of the planet, Australia is also reeling at the evidence of high level corruption, again being totally excused and ignored by the powers that be in Malaysia.

Papers down under are full today of the story of Malaysia’s head of CID who has decided to surrender up the equivalent of RM1 million seized by the Australian police, again on the grounds of money laundering of the proceeds of corruption, rather than to attempt to contest the matter in court.

And what has happened to the man in charge of policing high level organised crime in Malaysia, who dares not challenge these accusations against him?  As with 1MDB the Malaysian Government and the Inspector General of Police are choosing to believe a cock and bull story that he thinks it would be “too expensive” to claim his RM1 million back!

This is the man in CHARGE of PREVENTING crime in Malaysia!

How many other cops in the world could afford to kiss goodbye to RM1 million with such a shrug and to ignore the blow to their reputations in the process?

All is not well in the State of Malaysia and Malaysians and under such circumstances nothing can be assumed safe or sacred.  If Malaysians vote to retain such leadership (or are rigged into appearing to do so) then not a single one of their possessions will remain safe from the criminals in charge.