EPF Bonds - Time To Investigate Fully The Claims Of Forgery

The front page story in today’s Canberra Times confirms that the hastily issued EPF statement last week, denying all contact with the firms Ladylaw Securities and Limage Holdings, conflicts with testimony and evidence from a number of respected entitities in Australia.

Separate Australian company spokesmen have confirmed there were indeed discussions relating to possible billion dollar investments, both by EPF and other funds controlled by the Ministry of Finance, in Australian properties through Singapore incorporated Ladylaw Securities Pte Ltd. 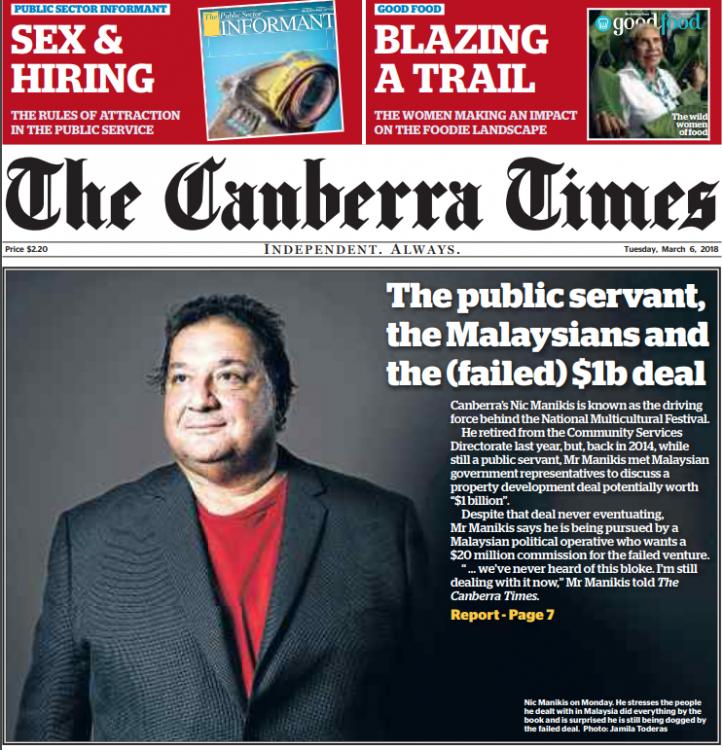 The development raises further concerns about EPF’s other major denial over its dealings with the Luxembourg company Limage Holdings S.A.

A large body of evidence shows that the Malaysian savings fund assigned Limage Holdings no less than RM10.64 billion worth of bonds to supposedly leverage billions in US dollars, allegedly to fund a shadowy hospital project managed through a one-woman Malaysian enterprise named TJJR Diversified (M) Sdn Bhd.

EPF has claimed that the mass of documents and emails relating to this deal, including signed and notarised legal agreements as well as alleged bank documents, are all forged.  No clear reason has been provided as to why this should be so. Insiders say that to the contrary there was a scheme to siphon public money into Najib’s election campaign coffers.

Another denial has been extracted from the Malaysian government controlled bank RHB, which is also implicated in the documentation.  Last week RHB Banking Group issued a statement to Reuters news agency saying it “refutes the allegation” in the Sarawak Report article, although the denial was non-specific.

RHB Banking Group (“RHB”) refutes the allegation made by the Sarawak Report on its website and Facebook yesterday which implicates RHB Bank. RHB would like to state that the allegation therein is baseless and untrue.

HSBC, whose Hong Kong office is also implicated in the apparent efforts to leverage cash from the bonds during 2016 has also issued denials through its KL office:

HSBC does not have any dealings or any agreement with TJJR Diversified (M) Sdn Bhd, Matrai’s Limage Southwest Holdings LLC, nor any parties as stated by the Sarawak Report [HSBC Malaysia]

Whether the bank acknowledges dealings in 2016 is yet to be fully clarified. Meanwhile, it is high time EPF producee the bonds and proved them to be unemcumbered, given that it is now established that a named official at the fund had proposed the hospital project, which they deny existed, to third parties such as Ladylaw Securities.

The two companies at the centre of the affair Luxembourg based Limage Holdings (owned by convicted financial fraudster Dr Gyorgy Matrai) and TJJR Diversified (M) Sdn Bhd have yet to comment publicly on the matter.

Gyorgy Matrai has not responded to emails to his known addresses, although evidence shows that he and his wife and family spent time in Singapore and Malaysia last year.

If he was visiting the region for purposes other than the purported US$4 billion deal based on EPF’s bonds, why not clarify the situation?

Junaida (June Aida) binti Hussin has also failed to public deny or confirm her involvement in this alleged transaction of the century.  Yet the documents linking both to the EPF deal could not be more specific.

Furthermore, the email trail shows that the person allegedly in touch with the two companies from EPF was using a name and email remarkably similar to that of Ja’affar bin Rihan, the executive who has denied meeting and corresponding with Ladylaw and yet who Ladylaw’s Managing Director has said suggested the hospital project to him. 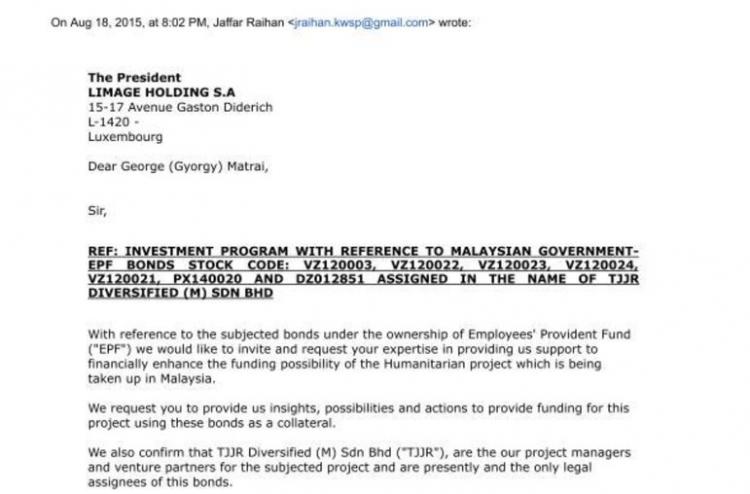 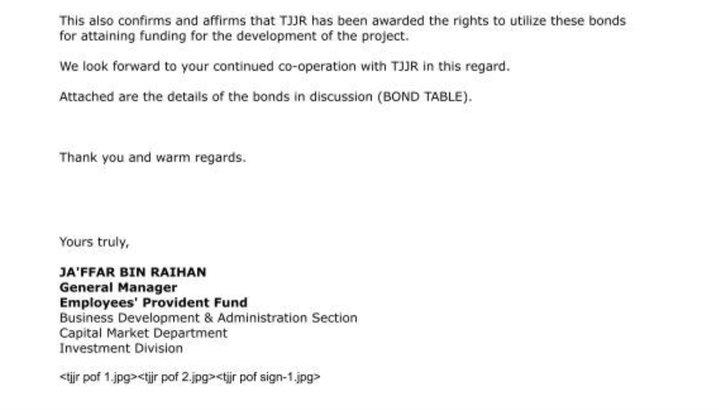 According to the documents Gyorgy Matrai responded rapidly with a plan to the request for advice: 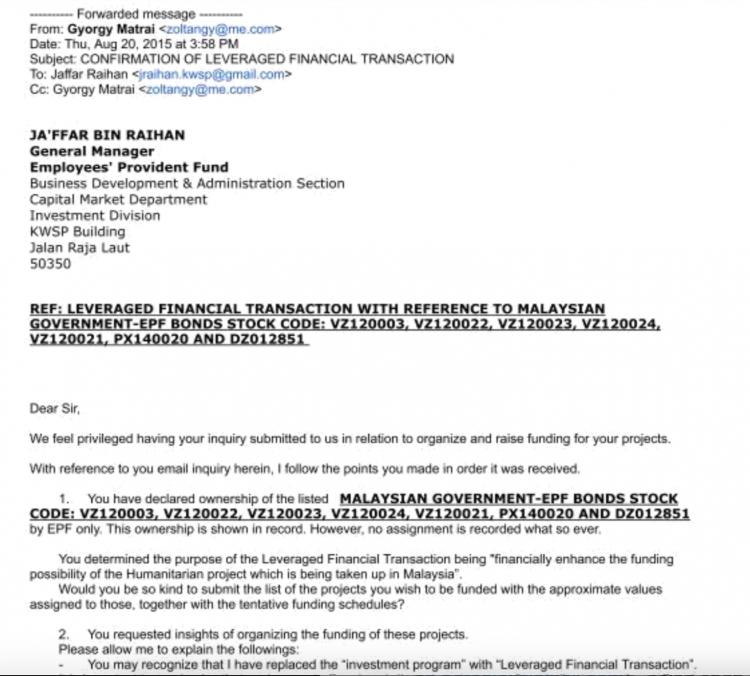 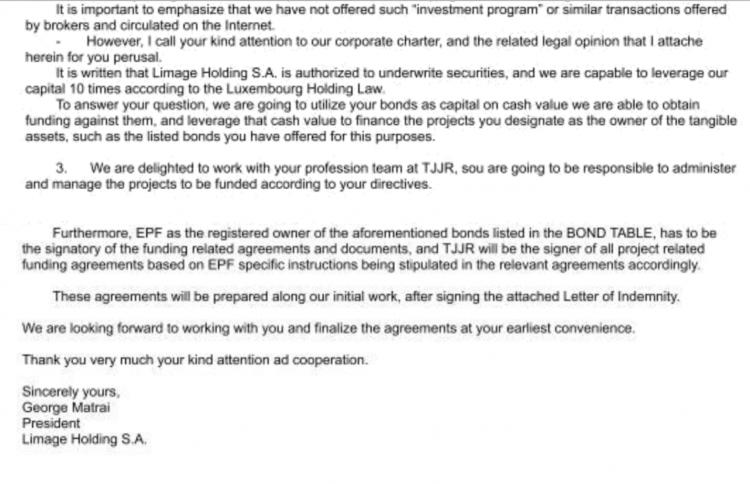 If this is all forged material, as EPF has stated, the reason for devising such a series of complex interchanges as a hoax remains very unclear.  We therefore suggest that if the EPF Board has yet to instigate an enquiry into the full detail of the matter, it is surely high time that it did or at least to release the findings of the police investigation following the apparent police reports that EPF submitted after a prominent UMNO politician started to issue legal proceedings for a commission on the matter from late 2015.

This is all the more so, because following the early interchanges Gyorgy Matrai appeared to issue a very detailed set of documents to nail down the three-way agreement between Limage, TJJR and EPF with a view to monetising the worth of the bonds.

Whereas the introductory emails (above) had been sent to a bogus EPF address, which was in fact a private email – [email protected] – by contrast all the key purported agreements were sent by Matrai to a functioning email address at EPF under the name of [email protected] and also to a known email address for June Aida Hussin at TJJR Diversified.  For example: 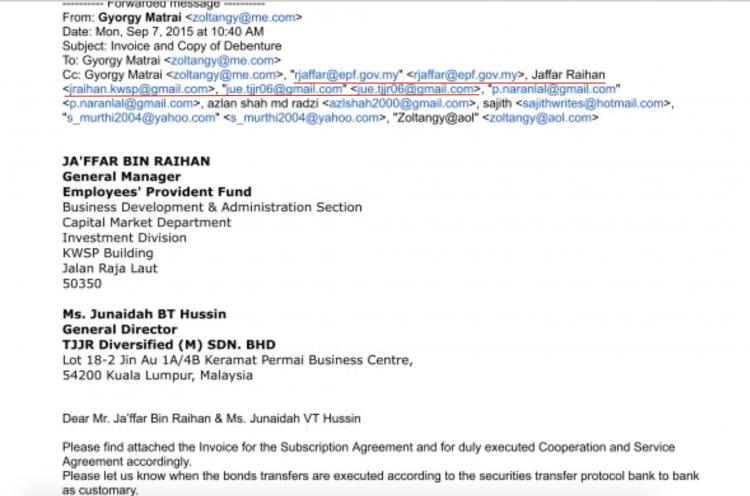 Since the pile of agreements detailing the signing over of the bonds (which EPF have said were forged, fraudulent and related to a non-existent arrangement) were all emailed to a working EPF email address, the situation plainly begs a very thorough examination of what was going on and a public report by the fund as to the outcome of their investigation.

Where there is a genuine legal action underway, genuine email addresses involved and copious documentation of this nature available, the term “no smoke without fire” comes strongly to mind and blanket denials that conflict with evidence simply do not pass muster on the part of EPF.

The investigation could begin with an enquiry as to actually who it was that walked into a KL notary’s office on August 24th 2015 to sign a letter of indemnity to Limage Holdings on EPF’s behalf, using the name Jaffar bin Raihan and producing the ID card of the senior EPF executive Ja’afar bin Rihan for the notary to scrutinise and vouchsafe?

Perhaps the TJJR executive Azlan Shah Md Radzi, who was also working for Ladylaw Securities and who attended this apparent signing with his own ID could shed light?  After all, if the whole thing was made up and forged then it would surely be easy to extract a statement from the notary and an explanation from Mr Azlan Shah Md Radzi, which could then be made public?

The pensioners and savers at EPF deserve to have a full explanation and to have their minds set at rest that the bonds below were not assigned in any way as collateral as the various agreements imply was being negotiated through the documentation available.

Gyorgy Matrai’s wife posting from a party at the US Embassy in KL in September 2017 – what was the US based financier and his family doing in Malaysia?