Extensive evidence has emerged of an extraordinary operation to loot Malaysia’s public savings funds and pass billions of dollars into accounts controlled by individuals answering to Prime Minister Najib Razak.

Following an investigation spanning several months, Sarawak Report has sighted numerous documents which reveal that since 2012 a group of operatives, assisted by two convicted foreign fraudsters, have collaborated to extract billions of dollars from EPF, KWAP, FELDA, FELCRA and other public savings funds and government linked companies.

The scheme was to invest the public money into risky, foreign investment vehicles owned by the two unlicenced foreign fraudsters (both previously jailed for financial crimes) in return for major kickbacks targeted into a small Malaysian company named TJJR Diversified (M) Sdn Bhd.

Supporting their efforts, according to correspondence released by whistleblowers, was the Finance Minister/Prime Minister Najib.

The schemes were being targeted at a series of public funds under Najib’s Ministry of Finance and invited each of those funds to invest a jaw-dropping billion dollars each into Miller’s unlicensed shell company, Ladylaw Securities Pty Ltd, incorporated in Singapore (see later article):

“I am grateful for the cooperation with the Federal Land Development Authority (FELDA) previously and other government agencies in the future…. I have instructed the Malaysian Treasury through the Ministry of Finance (MOF) to discuss with the Employees Provident Fund (SSWP/EPF) to formulate and identify the best system for the management of these financial investments to be implemented by all government agencies involved…. I hope that this cooperation can continue and remain strong in the future”
[translation from letter from Najib Razak to Ladylaw Securities] 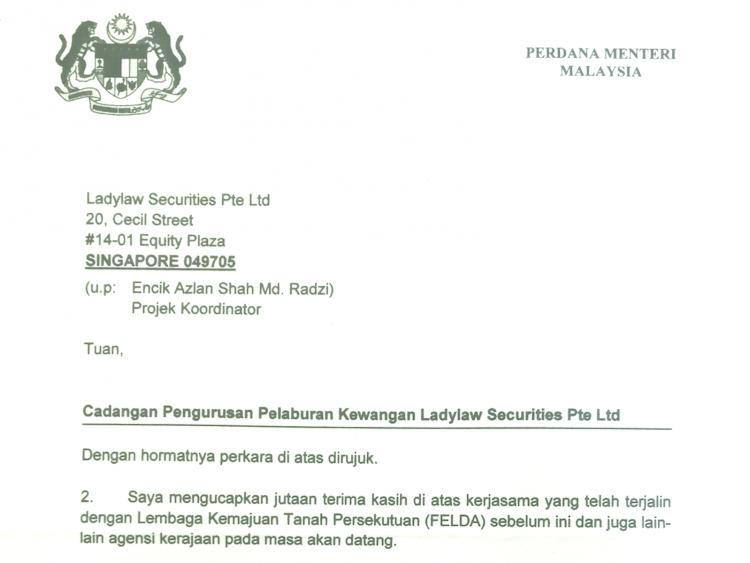 Further documents show that the interchanges and negotiations involving this group of fraudsters and the Prime Minister’s Office culminated in an eventual agreement to transfer Malaysian public bonds worth RM10.64 Billion from the Employee Provident Fund (EPF) to a second little known Luxembourg entity named Limage Holdings S.A., owned by yet another convicted fraudster, forger and money launderer, a Hungarian called Dr Gyorgy Matrai.

Matrai was tasked to raise US$4 Billion in cash off the back of those bonds, of which at least US$1.6 Billion has now been channelled back into Malaysia to support BN’s funding for the up-coming election, according to additional information passed to Sarawak Report.

Sources have indicated that this staggering sum derived from EPF was transferred in January into the RHB dollar account in Kuala Lumpur of a little known entity nammed TJJR Diversified (M) Sdn Bhd, a company owned and directed by one woman, supposedly charged with coordinating a major hospital project supported by EPF and the Ministry of Health.

Yet, there have been no public announcements related to this hospital project and insiders have told Sarawak Report that the entire proposal is merely a front to facilitate the creation of a war chest for Najib.

The entire operation, which has been underway since 2012, is clearly reminiscent of the earlier scandal involving Malaysia’s development fund 1MDB.  Najib had enmeshed 1MDB in a series of joint ventures with foreign entities, as a cover to siphon out billions of dollars to pay for BN’s election expenses during the general election of 2013 (GE13).

Sarawak Report exposed the scandal in March 2015 and the matter is now subject to the biggest global kleptocracy investigation, still underway in the United States, Switzerland, Luxembourg and elsewhere.

Whistleblowers have now confided that the shadowy EPF-backed ‘hospital project’, involving Gyorgy Matrai’s Luxembourg based Limage Holdings and the earlier attempts to promote investments into Ladylaw Securities represent parallel schemes to the 1MDB heist, and were also directed at diverting further billions to fund BN for the coming GE14 election.

In which case, once again, the money employed by the ruling parties to fund a bonanza of vote-buying under the direction of Najib can be demonstrated to have been stolen from voters themselves – this time from the old age savings plans of millions of Malaysia’s public servants!

SUMMARY OF THE SCANDAL:
How EPF Handed RM10 Billion To A Hungarian Fraudster! 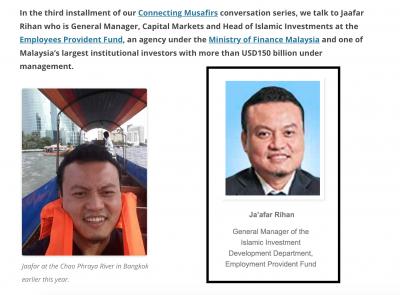 Details of the scheme that was eventually used to siphon over RM10 billion out of EPF have been extensively reviewed by Sarawak Report.

We have also spoken to witnesses, who confirm details and documentation related to the matter.

The documents indicate that a key EPF operative, the General Manager in charge of Islamic Finance Investments named Ja’afar bin Rihan, signed over RM10.64 billion worth of bonds, purchased as investments by the fund, to the financial fraudster Dr Gyorgy Matrai of Limage Holdings as collateral to raise billions more in dollars, allegedly to pay for a major hospital project supported by EPF.

Ja’afar bin Rihan has denied he was personally involved in any of these decisions and says that documents naming him are forgeries. It also remains unclear as to whether the formal ownership of the EPF bonds has been transfered.

However, there is overwhelming evidence that EPF and other Malaysian funds did engage with Ladylaw Securities and later also with Limage Holdings over the purported Intergrated Medical Cities hospital project.  This raises serious questions about how it was possible for the closely managed fund to enter into sensitive financial relationships with characters such as Dr George Miller, who spent ten years in jail in the Philippines and Dr Gyorgy Matrai, behind bars for two years in Switzerland (2005-2006), convicted of “fraud, breach of trust, forgery of documents and money laundering”. 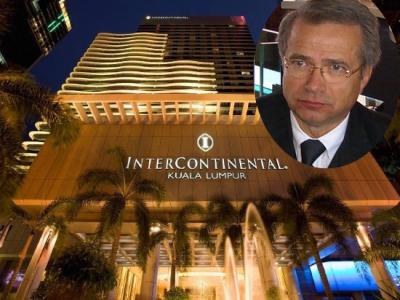 Indeed, according to our information, Matrai has spent much of the past year as a guest at the Five Star Intercontinental Hotel in KL, negotiating the alleged hospital deal and assisting in meetings to organise the return of the leveraged cash from the EPF bonds via RHB Bank into TJJR Diversified’s accounts.

This despite the fact that details of his conviction can be readily accessed via a simple internet search  and United States court documents. Swiss records further show that an appeal by Matrai against his conviction was futher dismissed by the Swiss courts in 2014, shortly before EPF apparently entrusted him with finance raised from EPF bonds worth RM10.64 billion.

Matrai boasted in emails to EPF seen by Sarawak Report that his company Limage was authorised under Luxembourg laws to leverage as much as ten times the worth of those bonds to help pay for the ‘humanitarian’ hospital enterprise, that was allegedly being supported by EPF’s management in a joint project with the Department of Health.  According to the emails, this is what an alleged EPF manager with a working EPF email address, calling himself ‘Jaffar bin Raihan’, required his services for.

The project has remained a ghost, according to all available evidence, although documents indicate that at least US$4 billion has been raised through Limage off the back of the EPF bonds, which represent major EPF investments in PLUS, the highway project purchased in 2012, and Tenaga Energy purchased in 2014 and 2001. 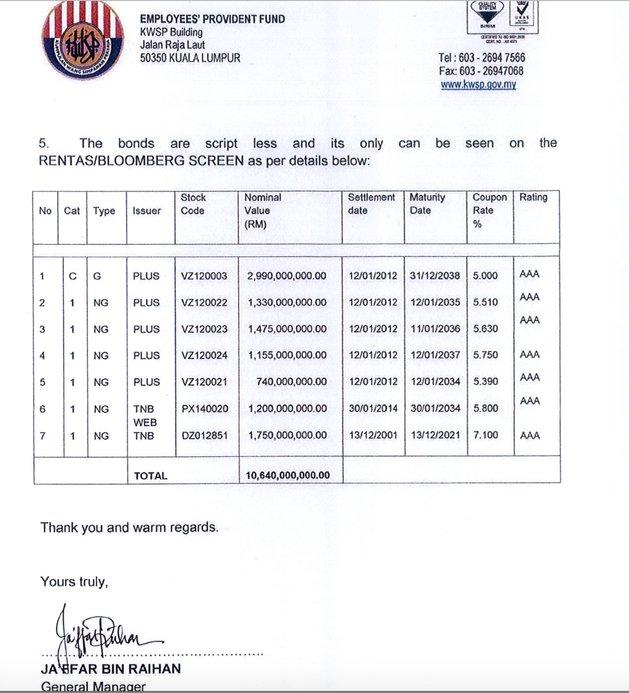 Questioned by various news organisations this week, however, the senior EPF executive allegedly cited in the documentation, Ja’afar bin Rihan, has issued total denials of his own involvement. EPF’s Communications Department has also issued a statement on his behalf denying that the executive has met with or even heard of individuals representing Limage Holdings or Ladylaw Securities, companies he also denies knowledge of.

Ja’afar bin Rihan also claims to have recently reported to the police that he has been made a victim of forged documents. Sarawak Report has noted that several of the documents relating to the signing over of the bonds do carry variations of his name and signature.  Separate EPF email and private email addresses have also been used under those variations on his name to conduct much of the project. 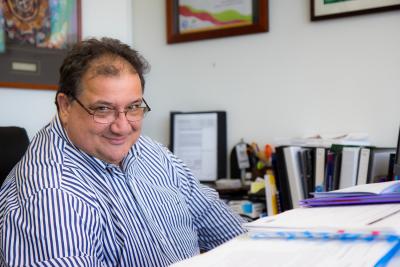 However, the outright denials of any engagement in these projects by Ja’afar bin Rihan conflict with the testimony of other witnesses involved in these deals, including the current Ladylaw Securities majority owner and director, Nic Manikis, who has confirmed to Sarawak Report that he and colleagues corresponded with and met Ja’afar bin Rihan in his EPF headquarters office in KL, order to discuss various investment proposals in 2014.

Manikis has also volunteered to Sarawak Report that Ja’afar bin Rihan himself raised the prospect of Ladylaw gaining investment from EPF by becoming involved in the proposed hospital project – the suggestion was raised, Manikis says during late 2014 and early 2015.

One thing that is certain, is that three years on there is no sign whatsoever that a genuine hospital city building programme backed by the Malaysian Department of Health and funded by EPF bonds is underway.  What whistleblowers maintain is that the real purpose of this ghost project was to deliver US$1.6 billion in hard cash into TJJR Diversified’s dollar account No: 6141229-00022915 at RHB bank, which arrived in January 2018.

It has signalled the creation, they say, of the new slush fund that is ultimately controlled by Najib to fund GE14.