Back in 2014 Sarawak Report first started to receive concerned notices from people related to what was going on at FELDA, namely the massive expenditures on dodgy investments that then appeared to leak the money of trusting settlers into the hands of the privileged and connected.

As one person with every reason to know wrote:

“Look Into Felda Global Ventures, they are broke… sensitive docs prove an excess of RM2 Billion is being furiously padded on projects being approved to be siphoned off my PM & his wife”

Sarawak Report has subsequently sighted the documents referred to.  These include memos from the Prime Minister/Finance Minister’s Office to Isa Samad, then Chairman of Felda, urging him to hurry up and process billion dollar payments to a small, unlicenced foreign investment vehicle.

The investment vehicle’s proposal was that it would then put the money into properties and raise a healthy return on them.  However, given the sheer size of the enormous investment, the handing over of control of such a sum plainly represented a huge risk.

The extraordinarily low level of due dilligence behind the project gives the appearance of deliberate negligence on the part of Felda management.  However the correspondence sighted by Sarawak Report makes it clear that they were under direct and urgent pressure to agree to the deal by the Prime Minister’s Office.

Writing and signing this correspondence on behalf of the Prime Minister was one Siti Azizah Binti Sheikh Abod, describing herself as Pegawai Khas Kepada, YAB Perdana Menteri [Special Officer To, YAB Prime Minister].

“With regards to the matter above and under the orders of the Prime Minister for the business between the Prime Minister’s Office and FELDA Holdings and YB Tan Sri as the Chairman of FELDA, please hand the Statement of Readiness document over to the PM’s Office immediately.  This is to ensure the investment project can proceed immediately and provide the investment returns.
I thank you for your cooperation.

This note was copied to Najib Razak himself and the ‘business’ referred to in the letter was a proposed investment of one billion US dollars in a previously unheard of private company managed by two foreigners, one of whom had no professional financial background. 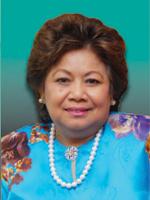 Three years later and most of that money raised has now disappeared, resulting in the present investigations by corruption agents into FELDA and indeed its former Chairman Isa Samad.  Perhaps, particularly in the light of such parallel scandals as 1MDB, where the Prime Minister has been identified as the ‘Malaysian Official One’ behind a series of monster thefts by the US Department of Justice, the anti-corruption investigators ought to be raising their eyes higher than Mr Samad?

There is another interesting angle to this worrying correspondence.  Ms Abod, the author of this and related letters held a specific role at that time in the Prime Minister’s Office, which has been identified in official listings and already publicised.  She was in fact the head of the unit within PMO known as ‘FLOM’.

Enquiries have established that ‘FLOM’ referred to First Lady Of Malaysia, who had opened her own unit within her husband’s office at taxpayers’ expense and her confidant Ms Abod was at the head of it.

Perhaps it is time to enquire more deeply as to the exact daily duties of Ms Abod on Rosmah Mansor’s behalf, especially when those duties tied in with the Financial decisions of her husband?

FELDA settlers for one will be extremely interested to have full answers, given that their multi-billion dollar nest egg has now substantially evaporated under the guardianship of Najib Razak and Isa Samad.