'1MDB Due To Pay Up Soon' - But, Will It Admit Where The Money Came From?

The Minister of Finance, who is the man behind the entire 1MDB fiasco and theft, will of course have to find the money to pay the vast sum awarded against it by a court order to Abu Dhabi’s IPIC- a second tranche of US$602 million is due by the end of the month.

Ultimately, the Ministery of Finance/ Malaysian taxpayer is resonsible for all 1MDB’s debts, thanks to the various agreements behind the massive borrowing that went on. The fund and Prime Minister’s spokesmen have, sadly, lied about this responsibility on a number of occasions over the years, pretending that 1MDB’s borrowing was not backed by the Malaysian Government.

However, everyone is now very used to lies and misleading statements from these quarters, ranging from bogus royal donors to bogus investments, bogus cash accounts and bogus off-shore companies. So, noone will be surprised to be treated to another load of obvious porkies, when the recently extended CEO of 1MDB, Arul Kanda, comes out at the end of the month to claim that 1MDB has paid the debt after ‘cashing in units’ available in its bank accounts.

He won’t bring any evidence to back such claims: transparency it not where things lie with 1MDB. He will just ask the world to believe that units, which have been shown to be valueless by FBI investigators and which were equally found to be valueless by the Singapore authorities, who have tried and convicted the banking fraudsters involved in helping 1MDB executives pretend otherwise, were cashed in to produce the sum.

This will involve skirting round the equally awkward fact that the bank, where these units are supposedly housed, was closed down over the 1MDB fraud allegations over a year ago.  We can rest assured that the ever-grinning Arul Kanda, backed by his Big Boss, the PM/MOF, will ignore such trivial details just as he did when he made this same claim, when they paid off the first tranche of the fine earlier in the year.

All this has emerged as yet MORE solid evidence of the extensive crimes related to 1MDB and its associates has been announced, this time again by the Swiss financial regulator FINMA, who today condemned the major US bank JP Morgan for failure to prevent money laundering through 1MDB-related accounts. FINMA has announced the gentle sanction that it has placed the bank under ‘special monitoring’.

Sarawak Report has reported extensively over the past two years on the obvious irregularities manifested in the way JP Morgan handled the 1MDB/PetroSaudi Joint Venture account, at the same time as it managed the private accounts of PetroSaudi directors Tarek Obaid and Patrick Mahony.

As was amply illustrated by the money trails identified by the business newspaper, The Edge, back in 2015, vast sums were casually transferred out of the joint venture account (controlled by the Minister of Finance, Tarek Obaid and Prince Turki) into various private accounts in the names of Obaid and Mahony and then on again into business accounts controlled by these two individuals on behalf of PetroSaudi only. 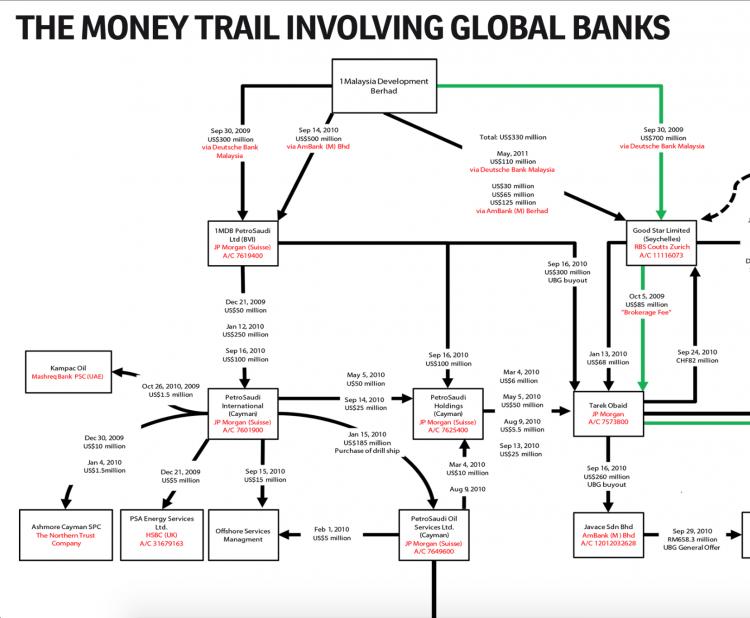 The 1MDB money trail shows how JP Morgan allowed money to flow from business to private accounts and then back to PetroSaudi accounts relating, for example, to PetroSaudi’s own ventures in Venezuela

From time to time 1MDB has claimed some sort of interest in the investments PetroSaudi then made in Venezuela. Its so-called Segregated Portfolio Fund in the Cayman Islands turned out to be backed by a couple of drillships owned by PetroSaudi as part of this Venezuelan enterprise.

However, the fact is these enterprises were controlled by PetroSaudi, using the cash injected by 1MDB, which was then funnelled out of the joint venture into the web of accounts controlled by Obaid and Mahony at JP Morgan. The FBI investigators have pointed out in their own court filings that 1MDB has never received a penny back from the Venezuelan venture, which was funded in this manner.

Likewise, money similarly funnelled through this web of accounts from 1MDB, funded a fancy London house for Director Patrick Mahony and further money was siphoned out to pay for a secret buy-out of Sarawak Chief Minister Taib Mahmud’s company UBG in 2010 – a company in which 1MDB advisor Jho Low had taken an earlier stake.

Sarawak Report has also reported how further millions were channelled through the same JP Morgan network of accounts to pay fat fees to then PetroSaudi joint shareholder, Prince Turki bin Abdullah, recently himself arrested by the Saudi authorities on corruption charges.  Before this injection of 1MDB cash, Tarek Obaid had run up a serious overdraft on credit cards managed by the bank, according to documentation seen by Sarawak Report.

This is how news agency Reuters has reported FINMA’s findings today:

“Enforcement proceedings conducted by FINMA between May 2016 and June 2017 uncovered serious shortcomings in the anti-money laundering controls of J.P. Morgan (Switzerland) Ltd in connection with business relationships and transactions associated with the allegedly corrupt Malaysian sovereign wealth fund 1MDB,” FINMA said in a statement.
The bank had failed to identify heightened risks in some instances, FINMA said, while in others it failed to adequately manage risks after identifying clients as politically exposed persons requiring special scrutiny.
“The bank failed in particular to identify the money-laundering risks relating to cash flows between business accounts and personal accounts,” the supervisor said.
“In one case, it credited hundreds of millions of U.S. dollars from the 1MDB sovereign wealth fund, allegedly earmarked for the purchase of a company, to the personal account of an individual with close ties to a 1MDB business partner.”
Part of that money was then transferred to a business account associated with the person, FINMA said, without the bank having questioned the purpose or procedure behind the transactions or the substantial sum that stayed in the private account.
Reuters

The private accounts referred to by FINMA are clearly those linked to the PetroSaudi directors and shareholders, together with their various business dealings. These individuals are still under investigation by various global law enforcers, including the DOJ’s own criminal investigation and it seems inevitable that the full details and names of these shady transactions will eventually be made public.

Meanwhile, Najib and his political allies and colleagues at 1MDB will continue to claim:
a) that there was ‘no wrong-doing’,
b) that Malaysians are ‘bored sick of all this harping on’ about the multi-billion dollar thefts and simply ‘don’t care’ about being robbed and
c) that there is plenty of money still left in the 1MDB fund to pay the IPIC debt without further raiding other public funds.

Where Will Najib Raid Next To Get The Money To Pay Off 1MDB?

All of the above excuses are plainly spurious. However, what ought to worry Malaysians most at this juncture is what new ruses their Minister of Finance will have been getting up to, in order to meet the obligations to IPIC, despite all this pretence?

Where are they stealing from at the moment to make good the debt?

Sarawak Report has learnt from those in a position to know that various foreign facilitators, linked into similar ‘joint venture’ roles to the one fronted by PetroSaudi, have been parked in KL for the past few weeks organising transfers of cash to meet the payment.  Malaysians have a right to know from which public sources those transfers have been made, yet we can all predict that Arul Kanda will be wheeled out to once again lie that it was money 1MDB already had in its threadbare accounts.

What is clear is that a government that has already shown willing to perform kleptocracy of the worst kind, in the words of US Attorney General Jeff Sessions last week, will not hesitate to thieve again to get itself off the hook.  Malaysians will merely be left guessing which of their public savings funds has been abused and whose pensions will be affected as a result?

The truth will eventually out, but Najib plainly hopes that will be after he has forced himself an ‘election win’, once again through a costly ‘campaign’, all at the expense of ordinary Malaysians, whom he plans to bribe with their own money, secretly siphoned out of the public funds which he controls.