Reports were emanating from KL of panic within government circles yesterday as it became clear that cosy expectations that the opposition would remain fractured, had proved false.

“Najib was ringing everyone asking what to do”

one insider source has told Sarawak Report, following the publication of an interview by the Guardian newspaper, in which the former premiere indicated he believed that the jailing of Anwar was unjust and that he would support his release and pardon.

In a shocking or galvanising statement, despending on your political viewpoint, Dr Mahathir also said that he would support his former deputy to become Prime Minister, as soon as it became possible for him to do so following such a release.

He made plain that he did not believe that this could happen unless and until the opposition won the next election, but that such an eventuality would prompt an immediate application to the Agong for a pardon, which he personally would support.

Few had imagined that years of famous emnity between the two former political allies could ever be so reconciled and at a stroke Mahathir’s statements, made to the paper in London, have re-drawn the political landscape.  It makes possible far closer collaboration within the present opposition coalition that had up to this point found itself unable to agree on its structure and leadership.

Anwar’s daughter Nurul Izzar, who confirmed that she also met with Mahathir during the London visit, went on record saying that the meeting had gone well and they had established joint commitments on future reforms. It opens the way to an agreement at the upcoming crucial meeting tomorrow, Sunday, at which it is expected agreement could finally be reached on the line up of key office holders in the coalition. Mahathir has been mooted as Chairman, which would see the giant of Malaysian politics formally returning to an active role as one of the leading figues of the Pakatan Harapan coalition.

Given that both sides have now agreed to campaign for Anwar’s release and reinstatement as the opposition leader and eventual Prime Minister, Mahathir would then be a possible contender for that interim leadership role, which could have an electrifying effect on the political mood of the country.

The meeting between the nonegenarian and the daughter of the man who was first sent to jail on sodomy charges during his own premiership was said to be extremely warm in London.  Nurul Izzar is believed to be especially close to Mahathir’s wife, who also attended the private meeting and posed for pictures afterwards.

This is widely viewed to be an attempt to deflect attention from Najib’s own present scandals around 1MDB, FELDA and Tabung Haji and to assert an equivalence between a scandalous foreign exchange trading debacle and the straight theft by the Prime Minister of billions of dollars, much of which ended up in his own bank accounts. 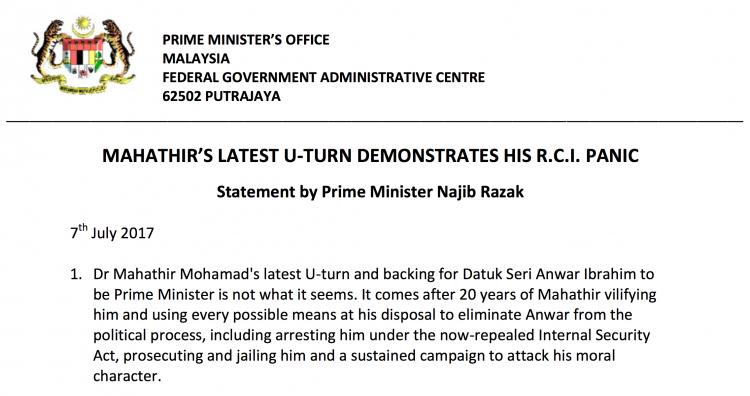 Najib accuses Mahathir of panic, but has been calling widely for advice on how to handle the developing cohesion in the opposition

In his statement Najib also accused Mahathir of “putting Anwar in jail”, when in fact there has been no evidence that the former premier was directly involved in Anwar’s original trial.  By contrast, Najib has been consistently and directly implicated in the latest case against Anwar, interviewing the plaintiff in his own house just two days before the allegation of sodomy was made.

The latest development in what has been widely denounced as a heavily flawed prosecution, beset by political pressure from Najib, came when Sarawak Report pubished MACC documentation which shows that the Chief prosecutor in the case (unusually brought in to push an appeal against Anwar’s original High Court acquittal) was paid RM9.5 personally by Najib shortly before the conclusion of the case.

The lawyer, Shafee Abudullah, had earlier controversially claimed that he had conducted the case for free.  The High Court has now required that Shafee and the government explain this payment by July 12th, which is Wednesday next week.

When Mahathir arrived home he was reported as having further stated that he believes the case against Anwar was fixed, a viewpoint that Najib hims appears to have clumsily confirmed in his statement by suggesting that the previous case itself was likewise fixed, even though political interference nominally does not exist in Malaysia’s supposedly independent legal system and prosecution service!

Najib’s retaliation has been accompanied by a flurry of supportive statements from key cheerleaders. Minister, Salleh Said Keruak, immediately claimed that Mahathir was implying that judges were not to be trusted, threatening the veteran politician with jail for contempt. Deputy PM Zahid Hamidi has also come out to threaten Mahathir to ‘watch his mouth’.

Najib’s own statement continued in what appeared to be an unusually hysterical tone, also threatening his revered predecessor that he may receive a jail sentence following the outcome of the Forex Inquiry, which he has only just called (thus pre-determining the outcome before it has even been convened).  He launched a personal attack on the character of the most popular political figure in the Malay community, who successfully ran the country for over 20 years:

“Mahathir’s crusade is motivated not by the national interest, but by selfish personal interest. He is obsessed by saving his family legacy and making his son Mukhriz Mahathir Prime Minister….He has no principles and will do anything – including allying with those he jailed, calling for foreign intervention in our sovereign democratic nation, sabotaging our economy, and making 100 U-turns if so required to manipulate people’s minds.” [Najib’s Statement on Friday]

Najib also accused Mahathir of having lobbied to remove the intervening prime minister Abdullah Badawi, whilst neglecting to mention that he and his wife Rosmah Mansor had been more active than anyone in the campaign to oust Badawi in-between elections, so that he himself could replace him.

“Najib more than anyone was urging the party to remove Badawi, but now he complains that any similar move to get rid of him, after all this theft, is somehow unconstitutional. What rubbish!”

Najib, on the other hand, has made no formal response to the allegation by the US Department of Justice that his wife received a $27 million pink diamond and a long list of other gems paid for from money stolen from 1MDB, except to imply that the legal proceedings in the United States, Switzerland and Singapore are part of an unspecified ‘global plot’ against Malaysia.

Apart from yesterday’s statement Najib’s camp of supporters appear to turn to the pro-Government mainstream media to ‘manipulate people’s minds’ and create some confusion themselves.  Whilst on the one hand the attacks were continuing, The Star today has on the other hand reported that Dr Mahathir has actually withdrawn his remarks about supporting Anwar altogether. It means he has been simultaneously criticised for opposite things, presumably in the hope of convicing the population that the old fox of Malaysian politics has become senile.

Disinformation campaigns are a speciality of UMNO, as Sarawak Report has documented on many occasions, and Najib will be doubtless be setting about commissioning more of the same. The challenge for the opposition is to show their unity can hold and strengthen in the face of it.