According to the documents obtained by Sarawak Report, the controversial lawyer Muhammed Shafee Abdullah was one of the biggest individual recipients of money from Najib’s 1MDB slush fund accounts.

Shaffee, who is known to be an extremely close confidante of Najib and who was controversially appointed as the public prosecutor during the appeal against the acquittal of opposition leader Anwar Ibrahim on sodomy charges in 2014, received two payments.

11th September 2013 Najib paid him RM4,300,000 from his AmBank account no 2112022011906 and again on 17th February 2014 he received RM5,200,000 from the same account.  This account has been identified as having been funded by money stolen by the Prime Minister from the 1MDB subsidiary SRC, which had borrowed some RM4 billion from the civil service pension fund KWAP.

AG Apandi inadvertently confirmed that finding by waving MACC investigation papers showing the money trail into Account no 2112022011906 in January 2016, at the very press conference during which he announced that no wrong-doings had been committed and he was closing down investigations into 1MDB. 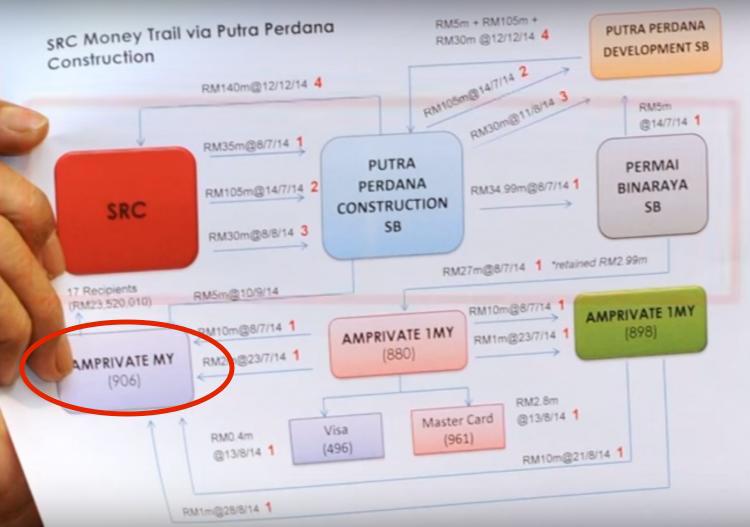 Later Apandi acknowledged the money had come from SRC, but chose to exonerate the Prime Minister because Najib had explained he hadn’t realised that this was where the millions had appeared from in his accounts.  No one has ever asked Najib (or recipients such as Shafee) for this public pension money to be returned.

What were the payments for? 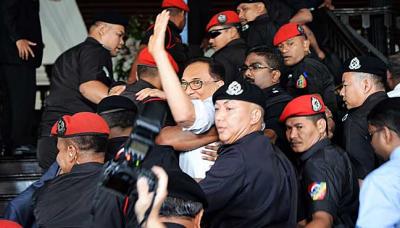 These payments came at extremely sensitive moments relating to Shafee and Najib and provoke immediate questions about why the Prime Minister was paying this particular lawyer such very large sums of illegitimate money?

Quite apart from the illegality of the source there are also potential glaring conflicts of interest.

The RM5,200,000 received in February 2014 came just a fortnight before the Appeal Court overturned an earlier acquittal of opposition leader Anwar Ibrahim on charges of alleged sodomy. Shafee Abdullah, a private lawyer, had been controversially appointed to a one-off role as the public prosecutor for this extraordinary appeal.

In the first place, for the prosecution to appeal an acquittal in a criminal case breaches all normal court practice and it should never have happened.  However, the involvement of Shafee in this untoward and plainly politically-motivated move against Najib’s most dangerous political opponent represented even further abuses of judicial process.

As Anwar’s defence team pointed out, to place someone from outside of the normal prosecution service into this high profile role at this point in the case is against established procedure. It also represented a clear conflict of interest, since Shafee himself is a known confidant of Najib.

And the conflict was worse than that, Anwar’s lawyers pointed out, because Shafee was himself a material witness, pivotal to the case for the defence, which was that Anwar was the victim of a conspiracy.

Why Shafee was considered a material witness

Two days before the alleged victim of Anwar, Mohd Saiful, pressed charges, the student was identified as having visited the home of Najib himself to discuss the entire matter.

Najib at first denied this fact. However, when photographs were produced he admitted meeting the student, but only to discuss his ‘career plans’.  Only after the alleged victim then broke under questioning and confessed he had discussed his allegations against Anwar with Najib did the Prime Minister admit that the discussion had taken place.

Shafee Abdullah has been proven to have been at Najib’s house at the same time.  However, the lawyer claims he was not part of the meeting between the Prime Minister and the student – a meeting where legal advice might be considered an obvious priority. Shafee said he was doing something else, somewhere else in the house. Anwar’s legal team contended that to the contrary he was advising the prime minister on handling the student, who went ahead to denounce Anwar two days later (after a further secret meeting with the Deputy Head of Police).

So, why was Najib paying Shafee such a huge sum of money in February 2014, at a time that this lawyer was supposedly contracted into a public role as a special prosecutor in by far the most high profile legal case of the period – a case in which Najib had a very strong interest in the outcome and in which Shafee himself was a material witness?

The Australian barrister Mark Trowell, who acted as an observer at the trial and then wrote a book about the case, has described the entire prosecution as a gross miscarriage of justice full of “glaring anomalies”. Shafee was at the centre of it, so why was Najib paying him over RM5.2 million?

March 7th 2014 a three man Appeal Court panel found Anwar guilty, overturning the judgement of the High Court the previous year in an astounding perversion of justice (normally an acquittal can never be appealed or reversed except in exceptional cases and through a complete re-trial).

Anwar naturally appealed the shocking and irregular overturn by the Appeal Court of his earlier acquittal and once again Shafee was used to prosecute the case for the government through the Federal Court.  In a short hearing in early 2015 those Federal judges upheld the Appeal Court judgement, causing no surprise in Malaysia.

What did surprise even Shafee’s colleagues was what this legal eagle did next.  He embarked on a road show justifying the conduct of the shameful trial process and continuing to villify Anwar, now in jail. Shafee even went so far as to regail his listeners with details of intimate allegations that had specifically been barred from the court itself, thereby breaking the rules again in the poorest of taste.

Shafee then sued lawyers who censured this conduct through the Bar Council for defamation, but lost his case.

Such enthusiastic support for Najib, which so plainly goes beyond the objectivity of a supposedly neutral observer betrays what has in fact been a long association between the two men.

Texts which were released on line many years ago between the two men and which have never been denied show that Shafee offered his services to the beleaguered then Deputy PM in the aftermath of the discovery of his translator Altantuya’s body and the arrest of Najib’s bodyguards and his advisor and proxy Razak Baginda for her murder.

Shafee closely represented Najib as they worked to get Baginda off the hook and put all the blame for the crime on the two bodyguards, excluding all discussion of motive from the case.  So, no wonder his bias against Anwar was raised by his lawyers, since Shafee is widely regarded as Najib’s prime legal fixer in opposition circles.

The court dismissed such concerns.  However, the glaring question as to why Najib paid Shafee nearly RM10 million in the few months and weeks before that verdict remains.