Fake Valuation Of PetroSaudi And The Role Of Credit Suisse In 1MDB .....

As usual the regulators seem to be treating major banks with kid gloves for facilitating blatant acts of mega-theft, compared to harsh sentences for junior figures and minor tricksters.

So, today’s announcement by the Monetary Authority of Singapore (MAS) had better be a prelude to proper action against the ultimate perpetrators of those thefts by prosecutors both there and in Switzerland, promptly, if its stated purpose of maintaining public confidence that it is a “clean financial centre” is to be achieved.

At the very least, with today’s confirmation by MAS that it has completed its probe and clearly identified AML failures in these and other banks (with small fry jailed) a warrant should be issued for Jho Taek Low, whose accounts have been officially identified as being at the centre of this:

Until such prosecutions get underway, we are left with very little indeed from the MAS statement about the detail of these failings by the banks in handling money stolen from the public of Malaysia.  The Malaysian public are entitled to know a great deal more. 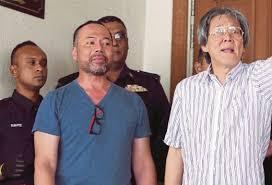 Reading between the lines however, it would appear that the role of Credit Suisse could end up representing one of the biggest bombshell’s of the entire 1MDB scandal, particularly since the MAS statement specifically referred to the role of Hong Kong in this affair and the cooperation of the Hong Kong authorities in the 1MDB investigation.

Up to this point, little of the information to publicly emerge on 1MDB has involved Hong Kong, although a considerable amount of the money that had been banked in Singapore had been understood to have been shifted by Jho Low on behalf of his 1MDB bosses on to the finance centre, which is where his own company Jynwel Capital is based.

There has been one exception.  Last year Najib Razak and his Attorney General attempted to slap terrorism charges against anti-corruption campaigner Khairuddin Hassan and his lawyer Matthias Chang, using the indefinite detention law that he had himself just introduced called SOSMA.  The Appeal Court has only just rejected that attempt by the Malaysian Prime Minister, finding the two men innocent.

So, what was the reason for that SOSMA charge?  Did government believe Khairuddin and Chang were attempting some kind of armed attack against civilians on the streets of Malaysia?  Far from it.

Prosecutors were instead accusing the two campaigners of “Economic Sabotage” and ‘destabilising the Government”, owing to the fact that they had presented themselves in Hong Kong and deposited documents and lodged a police report alleging that Najib himself was the named shareholder of four companies with bank accounts at Credit Suisse in Hong Kong, which contained a simply humungous sum of money. 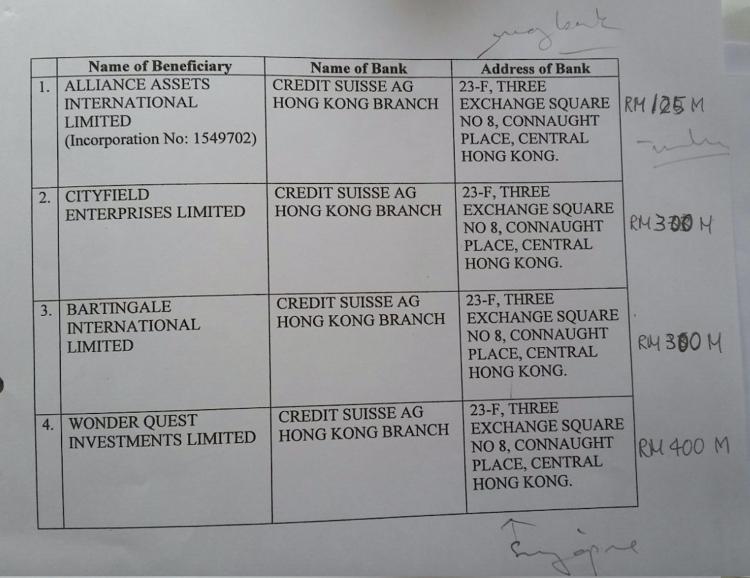 These are the details of the companies concerned and the sums the two men said they had been informed had been lodged with Credit Suisse – We are talking over RM1.1 billion/ US$330 million.

Details of those alleged accounts with Credit Suisse, along with notes on the amounts they are understood to have contained, have been uploaded on the internet. Khairuddin and Chang have not denied them. They refer to a total of over RM1.1 billion ringgit/ US$330 million.

Sarawak Report has seen no other referece to Credit Suisse relating to any other aspect of 1MDB.

Hong Kong, on the other hand, has been referred to in the context of money siphoned out from SRC through the Julius Baer branch in Hong Kong, before being transferred back into Najib’s KL account at AmBank in 2011 – via Jho Low’s company Blackstone Asia Real Estate Partners and its own bank account at Standard Chartered in Singapore.

Barring official proof, 1MDB watchers can only speculate if Khairuddin’s allegations have pinpointed the reason behind the $0.7 million fine of Credit Suisse.

However, Najib’s extraordinary and heavy-handed response lend credence rather than otherwise to his claims.  After all, had it all been nonsense a busy Prime Minister could simply have ignored the lone campaigner or sued him – why bring in a terrorism charge that so conveniently by-passes the need for a trial and the production of evidence?

It is particularly galling that in forcing through the controversial SOSMA legislation Najib had specifically promised that it would never be abused in such a way and would only be applied to fend off clear and present danger to lives and limbs by violent terror threats.  As predicted, this (one of the first uses of the Act) was all about protecting Najib from awkward revelations instead.

Malaysians want and deserve the full facts on the role of Credit Suisse in 1MDB as soon as possible.  And, if innocent of this particular allegation, so ought Najib.

Contained also in the sweep of penalties meeted out by the Monetary Authority today is another highly revealing nugget of new information, which confirms officially what Sarawak Report and others have long openly suspected and alleged.  PetroSaudi’s oil asset valuations were fake.

Amongst the people suspended or banned from further financial practice in Singapore are employees of the company NRA Capital Pte Ltd, including its boss Kevin Scully, who till now “prided itself on being the first independent equity research company licensed by the Monetary Authority of Singapore, offering independent institutional-quality equity research written for sophisticated investors…”.

It was already known that members of Kevin’s team had been bribed by Jho Low’s network of relationship advisors at BSI Bank to produce a favourable report on the value of those notorious “units” in 1MDB’s so-called Brazen Sky account, in order to get auditors from Deloittes to pass the fund’s accounts. This had come out at the trials of Jho’s link man Yeo Jiawei last year and his paid collaborators Kelvin Ang and Lee Chee Waiy.

However, today the Monetary Authority focused on a different bogus valuation in its statement, which strikes even deeper into the broader network of criminality at 1MDB – something that Sarawak Report has long highlighted: namely that the NRA researchers had misvalued (thanks to a bribe) PetroSaudi Oil Services itself.

The value of PetroSaudi’s oil assets lie at the heart of the first stage of the whole 1MDB scam, of course. There never were any oil fields worth billions and the original Chairman of the 1MDB Board resigned when he was first confronted with a plainly inadequate and bogus valuation of that shell company.

Later, 1MDB’s pay-offs to PetroSaudi were used to finance a new adventure in Venezuela by that company under its new subsidiary PSOSL. However, there has turned out to be little value in that venture and 1MDB itself was never a functioning shareholder or participant in the venture anyway, according to insiders close to the management of PSOSL at that time.

This is what the MAS had to say in confirmation of that today:

NRA was appointed to perform the valuation of PetroSaudi Oil Services Limited (PSOSL)4.  On 24 May 2017, Mr Ang was convicted of an offence under the Prevention of Corruption Act for bribing Mr Lee with S$3,000 to expedite the preparation of the valuation report on PSOSL.

The new piece of information that is implied in this fascinating development appears to come in the form of a massive, leaden hint to the effect that those ‘units’ appear to have been ‘invested’ to a very large extent in the shaky enterprises of PetroSaudi itself in Venezuela and ‘elsewhere’.

Might that explain the ex-post facto mysterious payment of an astonishing US$43 million, which Sarawak Report noted had been paid to PetroSaudi Director Tarek Obaid from Jho Low’s 1MDB-related Singapore accounts (according to court documents released last year) long after the relationship with PetroSaudi had allegedly ended in 2012?

It is particularly ironic that these devastating official confirmations of the bogus value of the Brazen Sky units and the bogus value of the PetroSaudi ‘shares’, on which the value of those units were originally based, has been issued just at the very moment that Najib’s spin machine has been attempting to boast that Malaysia will pay its debts to Abu Dhabi’s IPIC by cashing in these very units.

We have said it before and with the support of the Monetary Authority of Singapore we now say it again. Those “units” were always worthless and always bogus.  So, forget it: the money will be found, but by the Ministry of Finance, courtesy of Malaysian taxpayers.