Everyone Is Scared In Malaysia's 'Police State', But Najib Has Most To Fear

Najib Razak has started running Malaysia through his police force, according to MP Tony Pua, who reflects a growing perception.

Whilst Khalid’s men beat the life out of prisoners with seeming unrestraint, as the shocking statistics on escalating police brutality bear witcness, this jumped up police commissioner goes around making decisions on everything under the sun and is rarely out of the news pronouncing on diplomatic issues or his assessments of the guilt of individuals.

Who needs judges or lawmakers when you have the IGP ready to condemn and re-arrest under Najib’s arbitrary emergency laws people like student Siti Noor Aishah Atam, found innocent by the courts, but not in the eyes of Khalid? 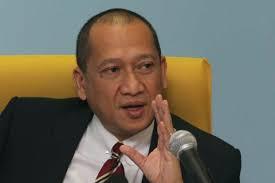 Nazri needed getting off the hook

Now this puffed up, pumped up police chief has waded in to veto a political debate, willingly entered into by two senior politicians with opposing views on the financial scandal 1MDB.

One is Malaysia’s long-term veteran leader Mahathir Mohammed, who left the ruling party over the matter and has a weighty dossier of evidence on the massive thefts and cover-ups.

The other is Mohd Nazri Abdul Aziz, a long-term Najib crony, who boasted he would be happy to defend the government over this indefensible affair and now desperately needs getting off the hook. After all, he doesn’t want to be seen running from the venue like his boss Najib when he heard Dr M would be quizzing him on 1MDB. 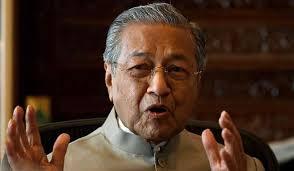 Mahathir – too dangerous to debate with over 1MDB

Enter Khalid, who has proceeded to ‘veto‘ this open, voluntary discussion between two senior public figures on a variety of spurious grounds entirely beyond the remit of the police.

He over-ruled the Selangor police acceptance of the latest proposed venue in a commercial area on the grounds of an unproven claim that ‘residents’ feared noise.

Tony Pua has therefore questioned whether Malaysia can now be categorised as a police state, where men in public uniforms tell elected representatives and law-makers what to do, whether legal or not?

Together with the Attorney General the IGP is now recognised as the instrument whereby Najib runs Malaysia, not according to the law but according to what suits him. If a court releases someone, then the AG just appeals or prosecutes under one of Najib’s new ‘terror’ laws that need no explanations and then the IGP rounds them up.

Why Khalid is for now the most powerful man in Malaysia

Of course, if the IGP had done his proper job, it would be Najib himself who would have been arrested by his men and prosecuted by the Attorney General (AG) for the crime of theft.

Instead, the IGP decided to work against the rule of law and law of the land and arrested the AG instead. Najib then unconstitutionally sacked the top prosecutor and put in his present man instead.  It has made Khalid the most powerful man in the land, because Najib now relies on him to escape justice.

For now Khalid is playing the role of willing henchman, yet another example of the shocking depths to which Malaysia’s governance has sunk to save Najib’s skin. But, this man in a uniform has visibly grown cockier by the day as the pleasure of power sinks in.  Likewise, his goons in the lower ranks have started acting towards the public with impunity.

There are very strong signs that this IGP’s impending retirement date will be put back by a special order from the Prime Minister, who cannot afford to lose his right hand man who knows where all the bodies lie buried in Putrajaya.  Of course it will be.

There is one bright side to this reign of fear imposed by Najib, Khalid and the rest, because   they have more to fear than anyone. The day this crew stop abusing the law or stop working together or the fed up millions of Malaysia finally chuck them out, will be a day of heavy reckoning and they know it.

Dato’ Seri Nazri Aziz must prove that Malaysia is not a Police State
After great expectations were set for the Tun Dr Mahathir Mohamad and Datuk Seri Nazri Aziz debate on 1MDB, for the second time, the Police stepped in to stop the debate by refusing to grant a “permit”.
The original intent was for the debate to be held in a townhall in the Tourism Minister’s own constituency, Padang Rengas.  The Police put a stop to that, forcing a change in venue to the premises of Karangkraf Media Group, the publisher for local daily, Sinar Harian in Shah Alam.
Despite an earlier approval by the Selangor police with conditions which were accepted by the organisers, the Police has now rescinded the approval.
Apparently, “the Shah Alam district police headquarters had received objections from residents in the surrounding area”.  Hence, “after studying and considering the matter based on public order, the peaceful assembly permit reference 4/17 dated March 31 is cancelled,” the Police said.
The denial of a permit for a political debate or dialogue is ridiculous at so many levels.
For one, Karangkraf is located at an industrial area, a good distance from the nearest residential zones.
Secondly, it is the role of the Police to facilitate and ensure that the dialogue or debate takes place in a peaceful manner by providing the necessary support and security.  The constitutionally-guaranteed rights to freedom of assembly and speech should not be denied by those who are threatening those very freedoms.
However, most importantly, it is not at all within the powers of the Police to deny approval for the event to take place.  Based on the Peaceful Assembly Act (PAA) 2012, all the organisers are required to do under the law is to give a 10-day “notice”.  The Act does not provide for the police to say yay or nay to an assembly, what more an indoor function at private premises.  A police permit is no longer required.
The clear cut abuse of power by the Police in this case shows without a doubt, the fear by the Najib administration for the debate on 1MDB to take place. The debate will only serve to confirm in the minds of Malaysians – the fact that billions of ringgit of 1MDB funds surfaced in the personal bank accounts of the Prime Minister.
It would have been a debate so lobsided that even Dato’ Seri Nazri Aziz, arguably one of the sharpest debaters on the frontbench, could not possibly win.  However, with the Tourism Minister demonstrating unbounded bravado, the Police was called to step in to stop the debate to save Dato’ Seri Najib Razak the blushes.
Dato’ Seri Nazri has previously told reporters that “Malaysia is not a Police State”, after the original debate was denied by the Police, hence the subsequent alternative arrangement was made.
Hence, we call upon the Senior UMNO Minister to prove that Malaysia is indeed “not a Police State” by insisting and proceeding with the debate with Tun Dr Mahathir, regardless of the ruling made by the Police.
The Minister’s failure to do so will not only confirm, by his own benchmark, that Malaysia has indeed degenerated into a Police State. It will also confirm that he is not a man of his words and has conveniently found a face-saving way out of proceeding with the much anticipated debate.