In January a New Zealand judge ruled that Malaysia’s tycoon on the run, Jho Low, could change the trustees managing the billion dollars worth of assets that the US authorities had seized in the United States on the grounds they were the products of money laundering from 1MDB.

The judgement caused outrage and surprise in political circles in New Zealand, where there has been growing concern over the reputation of its otherwise respectable financial sector as a haven for trusts and secret funds.

Their Justice Toogood had cited a Cayman Island precedent for allowing Jho Low and his family to change the professionals managing their trusts, because the Swiss bankers who had originally been assigned the task had refused to contest the seizure notices by the United States Department of Justice.

Following that judgement the Lows rapidly placed a group of New Zealand nationals who run a financial management company named FFP in the Caymans (they opened a branch in Auckland days before the hearing) in charge of their assets.

FFP immediately filed a challenge in the US California Court against the Department of Justice’s seizure of the Low family assets in America and many treated the matter as a significant victory for the Low family and their patron Prime Minister Najib Razak, who are trying to keep the spoils from 1MDB.

However, this week the US prosecutors made clear they were not prepared to accept the New Zealand/Cayman Island legal tactics and went back to court to fight off the challenge.

Jho Low and his family had quite simply run out of the time alloted to make that challenge under the US legal system they argued, so they had no grounds to cry over spilt milk. The Low’s new trustees had placed their challenge in February when the cut off date had been the preceding October. 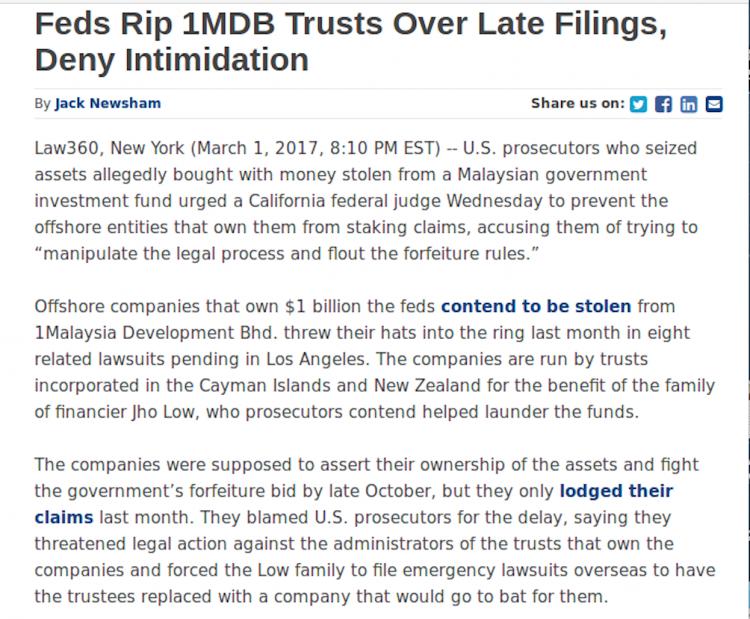 Jho Low’s resourceful lawyers are trying to argue that they should be allowed to re-open the procedures on the basis that the US prosecutors had ‘intimidated’ the original trustees of the Low family, who were from Switzerland’s Rothschild Bank.  These original trustees had refused to fight the sequestration of these proceeds of money laundering, presumably for reputational reasons.

However, acting for the US government, the federal prosecutors have made a point that very many fair minded people, who are fed up with the rampant abuse of secret off-shore structures would agree with:

The government has rejected those accusations…. saying the Low family has only itself to blame for the convoluted legal structures that hold its properties..
They knew what they were getting into, the prosecutors argued, and letting their companies lodge late claims and undo default judgements in six of the eight cases would encourage criminals to use offshore entitites to hide their assets.

“Movant’s failure to file a timely claim is a direct result of the fact that Jho Low and his family strategically chose to cede control over the defendant property by creating and elaborate labyrinth of trusts and shell corporations” they said. “The delay movant now asks the court to exuse is the time it took Jho Low and his family to deconstruct the fortress that they created to shield the assets” [360 law]

It is plain that the Low family will continue to do whatever they can to delay and snatch back these confiscated assets, purchased with money that the FBI have traced directly back to thefts from 1MDB.

It will soon be seen whether the US Court will make a better strike for justice than New Zealand’s Justice Toogood.  However, even if the challenge is accepted it does not mean the Low’s will win back their assets. The case will just have to go to a full trial, merely meaning more Malaysian money down the drain – spent on an army of lawyers and off-shore fianciers, all happy to act as ‘professional advisors’ to criminals and money launderers hiding off-shore.

Meanwhile, another Jho Low partner, the company PetroSaudi is also playing the court system to hang on to money siphoned out of 1MDB.  It managed to reverse on Appeal a UK High Court judgement that denied them access to $130 million from a Letter of Credit issued by PDVSA of Venezuela, on the grounds they had acted fraudulently to gain that letter of credit.

The Appeal Court only allowed PetroSaudi to take $20 million of that money however, in order to keep the company afloat, because PDVSA has now lodged a further appeal on the matter to the Supreme Court for final judgement.

Once again the money funding this sorry tale came from 1MDB, since it was the cash placed into the 1MDB PetroSaudi fraudulent joint venture that paid for the company’s adventures in Venezuela in the first place.