Sarawak Report can reveal that the brother of the Inspector General of Police is a director of a major arms and ammunition company, which has ties to suppliers of armaments to the police force.

This follows our expose last year that a company owned by the daughter and brother in law of the Inspector General of Police (IGP) Khalid Abu Baker is also selling arms and amunition.

Disgruntled critics complained that the company, named Nilai Arms & Ammunition, benefitted from its special access to the signature needed for its customers to get a permit.

The signature concerned is that of the IGP himself, revealing a shocking conflict of interest over the sale of dangerous guns in Malaysia.

Now we have obtained information about a further arms company, this time connected to the IGP’s own brother Abdullah Abu Bakar and involved in even larger contracts.

Unggul Arms & Ammunition Sdn Bhd, which was set up shortly after Khalid Abu Baker became, Deputy Inpector General of Police in 2012 has exclusive distribution arrangements with the major government-owned armaments manufacturer SME Ordinance Sdn Bhd and Sarawak Report has received information that it is sub-contracted sales by SME to Malaysia’s elite police forces.

The main director of Unggul Arms & Ammunition is Khalid Abu Baker’s brother Abdullah Abu Bakar, who recently hit the headlines following his questioning over joining a crowd that was attacking a church 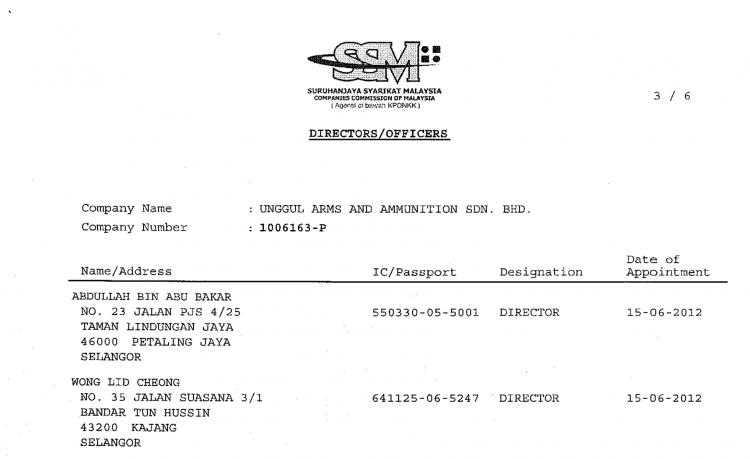 Director of an arms and ammunition company? The Police Chief’s brother!

Largest shareholder… but did IGP’s brother put up any of the money or do any of the work?

Unggul Arms & Ammunition has an online site, which advertises a bewildering number of military products, including army parachutes that it claims the company manufactures itself. 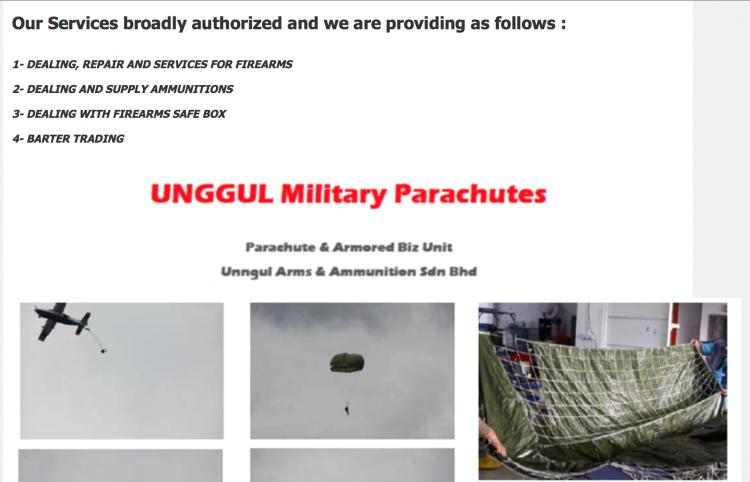 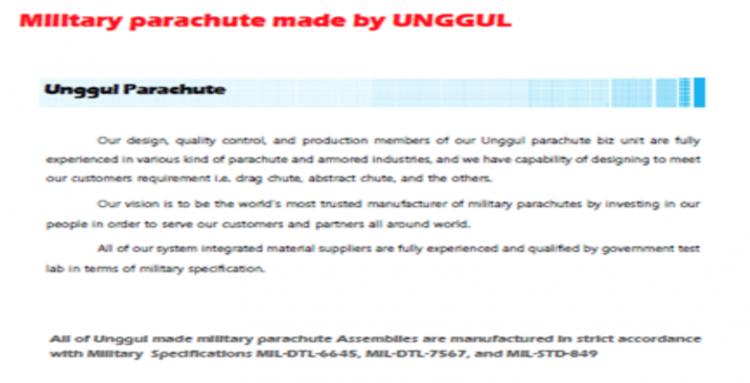 Military grade hardware made by Unggul?  Yes, according to the website. 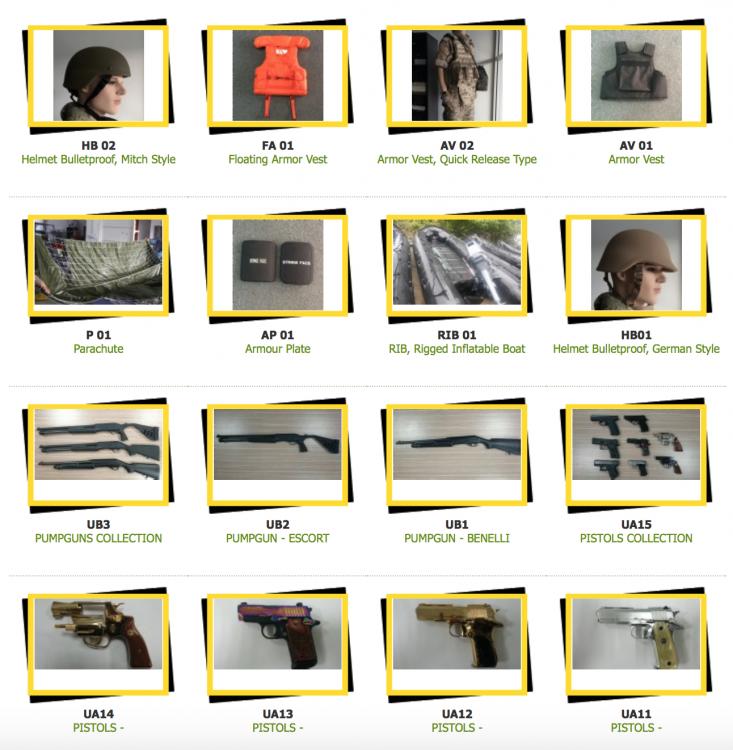 There is also a Facebook site for Unggul Arms & Ammo, which is clearly linked to its administrator, who is Abdullah Abu Bakar.  This site boasts of an array of bloodthirsty hardware, including semi-automatics, Glock handguns, bullets and shotguns. 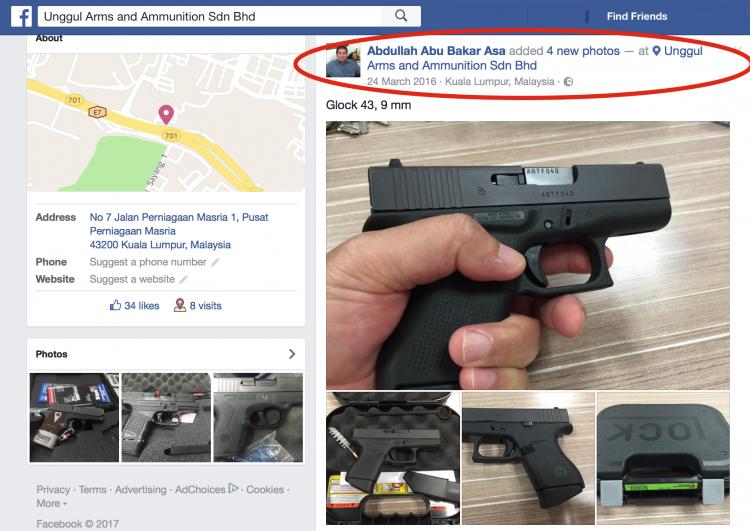 Unggul also operates a separate firearms training business and has its own gun ranges, for which it received a sought after permit to operate, which needs official police approval. 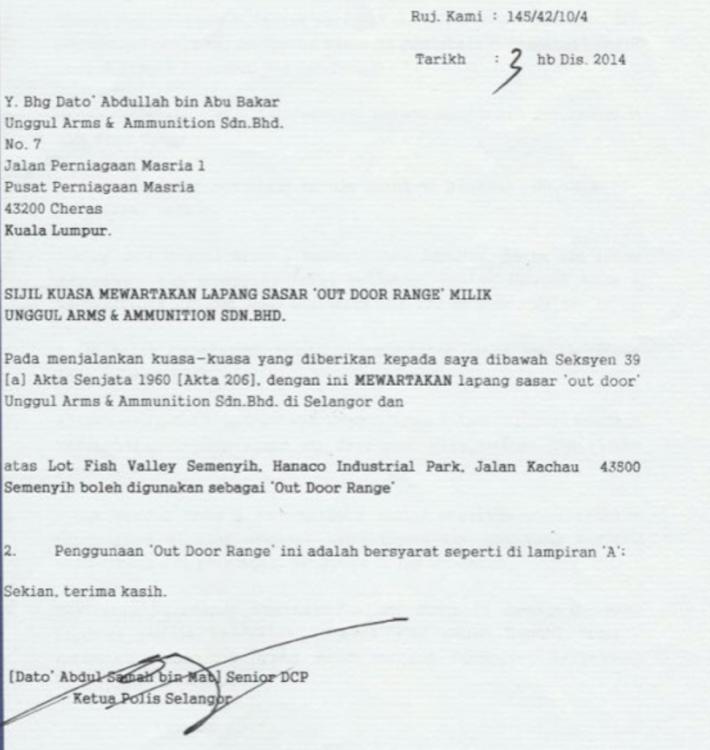 Gun range permit signed off by the police

Abdullah Abu Bakar’s own Facebook site is stuffed with pictures of these gun ranges and also of the products sold by his company Unggul. 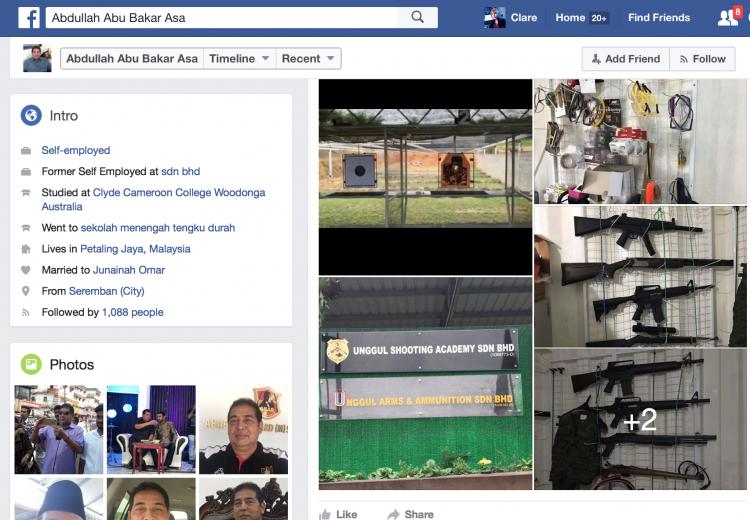 Once again Sarawak Report queries the astonishing apparent conflict of interest in this business, which relies on the signature of Abdullah Abu Bakar’s brother for permission to conduct virtually every single transaction that it undertakes. 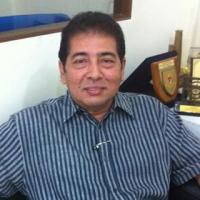 It is notable that this business came into being just months after Khalid Abu Baker became Deputy IGP in 2011, by which time he was able to deputise in the role of signing off gun licences.

There is another extremely worrying aspect to this already troubled matter.

The state-owned arms manufacturer SME Ordinance Sdn Bhd, which was only recently accorded the exclusive contract by the IGP himself to provide arms and ammunition to elite armed police units across Malaysia, appears to have entered into an inappropriately hasty relationship with Unggul Arms & Ammunition even BEFORE this rookie company had got around to registering a licence.

Documents made available to Sarawak Report show that SME invited Unggul Arms & Ammunition into an exclusive distribution contract for its shotgun ammunition sales in Malaysia on 19th November 2012.  Unggul’s licence to operate did not come through till several days later. 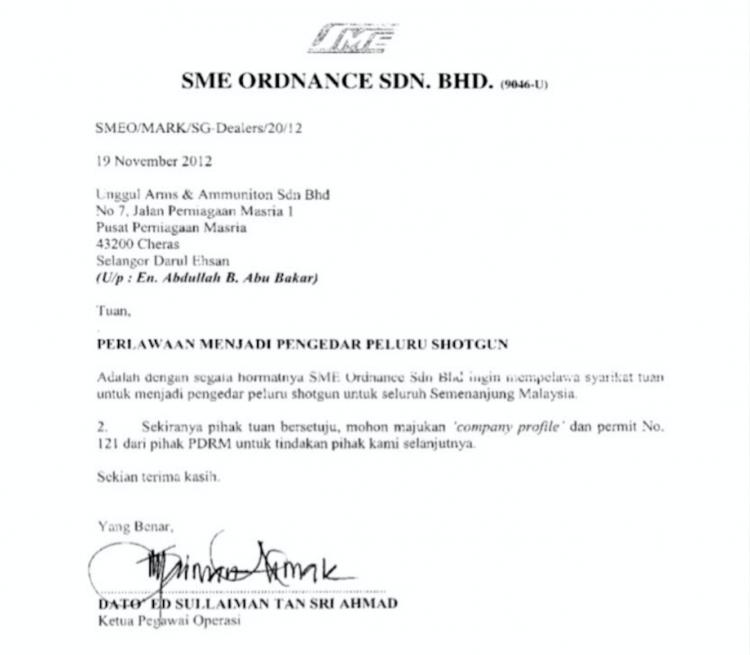 The letter says that the company has been selected to become the distributer of shotgun shells for Peninsular Malaysia:

“Re – The competition to become the distributor of shotgun shells:

With immediate effect SME Ordinance Sdn Bd would cordially like to invite your company to become a distributor of shotgun shells for Peninsular Malaysia
2. If the owner agrees, please forward the “company profile ‘and permit No 121 of the police for further action on our part
Thank you
Chief Operating Officer 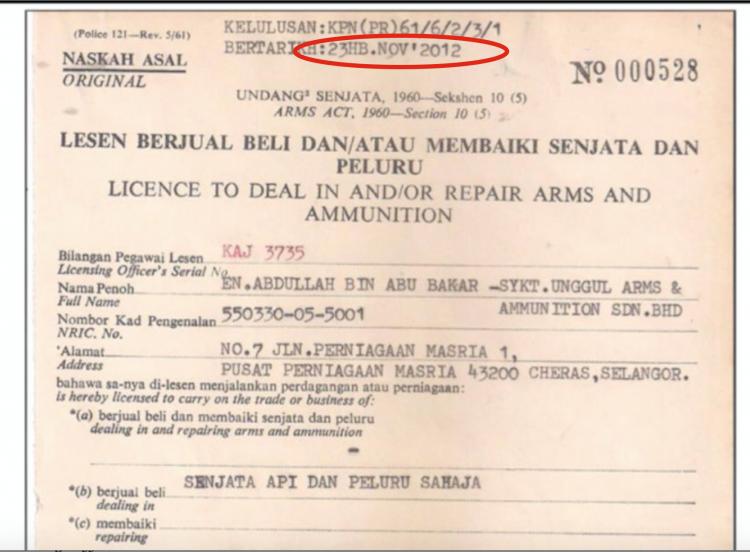 License not granted till 23rd November.

Yet the licence to actually distribute these weapons was only granted to the then Deputy IGP’s brother and his company Unggul Arms & Ammunition on 23rd November, indicating an astonishing lack of due dilligence by the state-owned company.

Fond of his medals – IGP Bakar

SME Ordinance had clearly been willing to offer a completely new and untested outfit this lucrative contract and we have to ask why?

SME Ordinance, which is a subsidiary of National Aerospace & Defence Industries Sdn Bhd (NADI),  has subsequently been reported as having received key contracts supplying the Malaysian police force with weapons which previously had been provided by other global companies.

In particular an RM8.6 million contract was signed with the PDRM for weapons supplies in October 2015:

PDRM is set to join the Armed Forces by having the Colt M4 Carbine as its standard rifle with some 15,000 units expected to be procured. PDRM’s Pasukan Gerakan Am – which is mostly equipped with Colt M16A1 rifles – is expected to be the first unit to receive the carbines…..National Aerospace & Defence Industries Sdn Bhd (NADI) senior vice president of Defence Tan Sri Mohd Shahrom Nordin told Malaysian Defence that the deal has been approved by the Treasury and the Home Ministry.

He added however that the SME Ordnance Sdn Bhd, a subsidiary of NADI have yet to get the confirmation from PDRM of the contract signing. Mohd Shahrom also said that SMEO had recently completed the delivery of some 200 Colt CM901 7.62mm rifles also to the police for its Special Forces unit, VAT69.

SMEO had also delivered the 2,000 Advanced Piston Carbine (APC) in 5.56mm to VAT69 and the Unit Tindakan Khas. The RM8.4 [sic] million contract for the APC was signed last October. Some of the APCs were also fitted with M203 grenade launchers.[Malaysian Defence]

According to informed sources Unggul Arms & Ammunition has a hidden sub-contracting role within the contract that means that this company owned by Khalid’s brother has a substantial interest in this lucrative deal.

Conflict of Interest is a form of Corruption – is IGP aware?

Given the plain and blatant conflicts of interest Sarawak Report suggests that Khalid Abu Bakar should get his family to remove themselves from their new found careers within the arms business and steer away from occupations that can be seen to clearly take advantage of his position.

This is called conflict of interest and is treated as a criminal form of corruption in most countries, including Malaysia.

In most countries a public official would be pressured to resign with such gross conflicts brought to light as have surrounded the IGP.  However, to the contrary, Sarawak Report has learnt that the Prime Minister, Najib Razak, is planning to encourage the present occupant to extend his position beyond his compulsory retirement date due 5th September this year.

This is speculated as owing to the fact that Khalid Abu Baker is widely known for being (together with the new Attorney General) the key individual supporting Prime Minister Najib Razak, who has been probed for grand corruption over the $7 billion theft from 1MDB.