Swiss Start Criminal Proceedings Against Falcon Bank - All Of It!

On Wednesday the Swiss financial regulator FINMA announced that it had recommended prosecutions against at least two senior former executive officials of Falcon Bank as part of the actions taken over 1MDB.

Yesterday, the Attorney General’s Office went a considerable step further than that and declared that it is opening criminal proceedings against the entire Abu Dhabi-owned bank!

The implication of the shocking announcement is that the Swiss law enforcers suspect that the entire operation of the private bank was flawed from top to bottom, making it effectively a criminal enterprise.

“The OAG [Office of the Attorney General] suspects deficiencies in the internal organisation of the Falcon Private Bank Ltd. It is believed that due to these deficiencies, the bank was unable to prevent the commission of the offences currently under investigation in the criminal proceedings relating to 1MDB.

Swiss law .. allows the prosecution of a legal entity that is suspected of not taking all the reasonable organisational measures that are required to prevent natural persons from committing offences, in particular money laundering or corruption offences.”

The Attorney General’s Office points out that this is the second Swiss private bank against whom such radical measures have been taken, all relating to money laundering of money at 1MDB.  The first, of course, was BSI closed in May.

Falcon transferred no less than $3.8 billion related to 1MDB’s sovereign wealth transactions, highly unusual for a small private bank. However, the regulators focused on one blatant transaction of 21st March 2013, where Falcon acted as an intermediary for $681 million dollars from 1MDB, passed into Prime Minister Najib Razak’s AmBank account in KL.

In the course of just that one day the money was passed from BSI Bank in Lugano, filtered through three private ‘investment funds’, passed to an account at Falcon Singapore named Tanore Finance Corporation and then on to Najib’s personal account.  FINMA described the Tanore account owner, Eric Tan, as a young Malaysian businessman with known political connections. 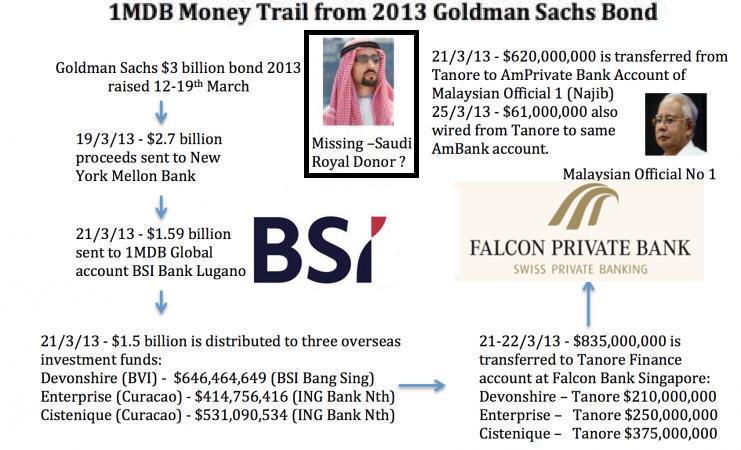 This manoeuvre had triggered several established money-laundering ‘Red Alerts': there was the size of the transaction; the speed with which it had passed through the account (providing no commercial logic to the transaction); the link to a politically exposed person and, of course, the final destination of the cash which was the politician in charge of decision-making at 1MDB – a man who had no legitimate reason to acquire a $681 million lump sum.

FINMA further points out that staff had indeed alerted management about all these factors and argued they must reject involvement in the deal:

“A number of bank employees expressed serious concerns to their managers about the relationship with the Malaysian businessman because of numerous suspicious factors and key questions remaining unanswered. One internal email relating to the transfer of USD 1.2 billion states: “We can’t find any reason/motivation/statement why this transaction has to pass through FPB [Falcon] and not from [Bank X] directly to the respective parties […].” Nevertheless, these internal warnings were not followed up satisfactorily.

When Najib decided later in August to close the relevant AmBank account after the GE13 election (it had topped a billion dollars before the election in March) Falcon Bank also agreed to receive the transfer of its remaining funds of $620 million.

FINMA quoted an internal Falcon Bank email, showing an acknowledgement of the illegality behind the decision on the part of banking management, but they had already been implicated by their earlier involvement:

“We started this six months ago and now we have to go through with it – somehow”. [FINMA STATEMENT]

FINMA had said the attitude of management to the money laundering was driven by the connections between the Board Members on the bank, who represented its owners Abu Dhabi’s Aabar/ IPIC fund.

These Board Members were Aabar Chairman, Khadem Al Qubaisi and CEO Mohammed Al Husseiny (Chairman of the Falcon Board at that time), both of whom had collaborated with Najib in stealing money from 1MDB in return for hundreds of millions of dollars themselves in kickbacks.

They have been arrested and are under investigation in Abu Dhabi.

For months Sarawak Report has slammed the Chief Executives of Falcon Bank, in particular the recently departed ex-Golman senior executive, Eduardo Leemann, who presided over the use of Falcon Bank as a blatant tool for Aabar’s crooked bosses to suck money from the various enterprises they had responsibility over.

Those criticisms are now vindicated.

Yet, as major action gets under way in Europe, silence pervades in Australia’s banking regulatory circles.  No enquiries have been launched by the Australian Securities and Finance Commission ASIC or related bodies, despite the fact that the major ANZ Bank is the majority shareholder (by far) of AmBank, which received and handled all these dirty monies in KL.

The bank also managed a series of internal Malaysian accounts belonging to Najib, using money stolen from the 1MDB subsidiary SRC International, also declared to be under investigation by the Swiss Prosecutor in a separate earlier announcement this week.

Yet, just days ago, when questioned in the Senate, ANZ’s present CEO, Shayne Elliott, continued to deny his head office held any supervisory responsibility for actions at AmBank, despite the face that each and every senior office holder overseeing the KL operation is on secondment from ANZ.

Indeed, this supervision had been the big selling point for AmBank, under the plans drawn up for investing in the market by ex-CEO Mike Smith (who unexpectedly retired as the 1MDB scandal swarmed around the bank last year).  According to The Australian:

“He [Elliott] said ANZ had not investigated whether any staff on secondment to AmBank had done anything wrong. “They are no longer employees,” he said. “They are responsible to the board of AmBank. AmBank has conducted those investigations.”

This is a position that seems quite impossible for ANZ to sustain under any genuine scrutiny of the facts.  The evidence is overwhelming that seconded staff remained employees of ANZ, returned to ANZ and remained reporting back to management of ANZ during their period of office in KL, as numerous bank press releases and other documentary evidence testifies.

This is how the ANZ seconded Australian, Mandy Simpson describes her own status on her Linked-in, while employed AmBank’s Chief Finance Officer – she says she is simultaneously employed by ANZ: 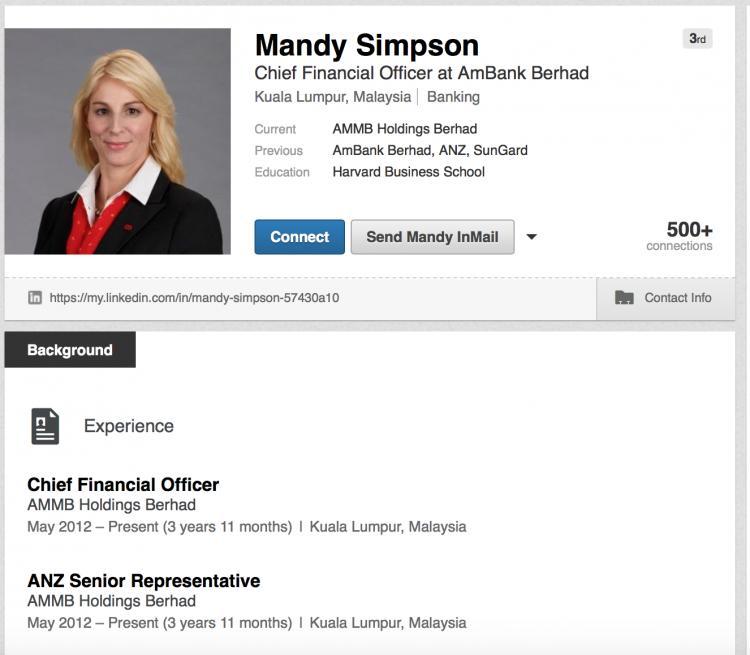 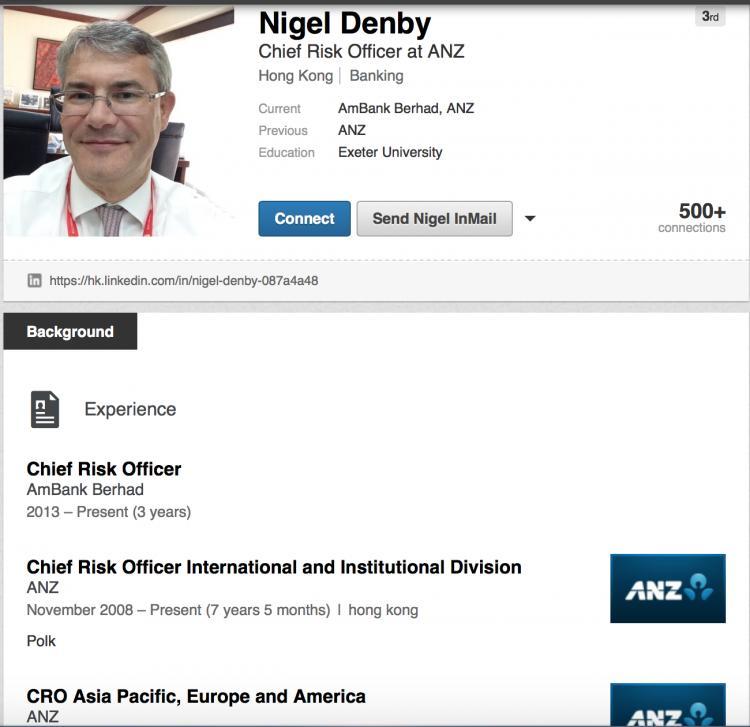 The head of AmBank at the time of the Najib accounts, Ashok Ramamurthy was also declared to be still reporting to ANZ headquarters by ANZ’s own media releases of the time: 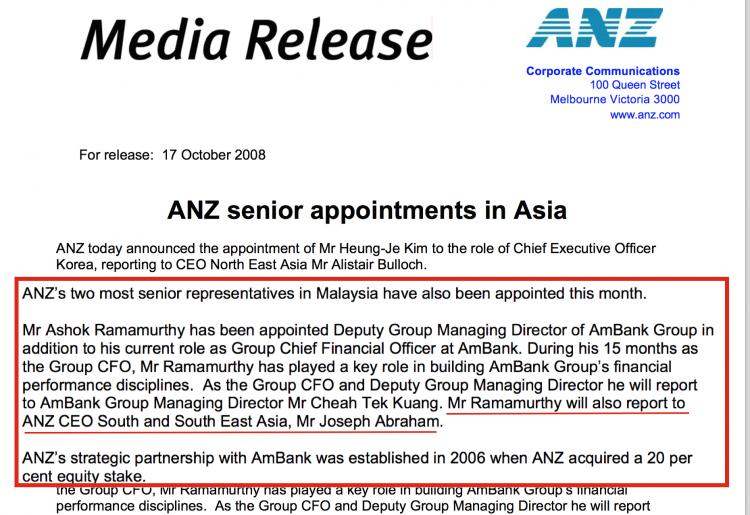 So, while others act, banking regulation is not looking good down under.