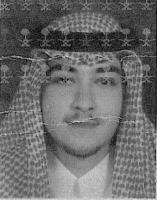 Formal passport pose, dropped for the highlife in Europe

Sarawak Report has located at least one of the swanky London properties acquired by PetroSaudi CEO and Co-founder Tarek Obaid, shortly after the company received $300 million defrauded from 1MDB.

Obaid himself received a personal kickback from fugitive financier Jho Low’s Good Star Limited of $85 million of “brokerage fees” on the deal.

The 5 bedroomed apartment in Park Street, Mayfair, purchased in August 2010, was described by estate agents as “an immaculately present duplex on the 3rd and 4th floors of this prestigious building”, which had been recently refurbished in luxury modern style.

It covers a total of 3,452 square feet and has a lift and full time concierge to attend to the residents needs. 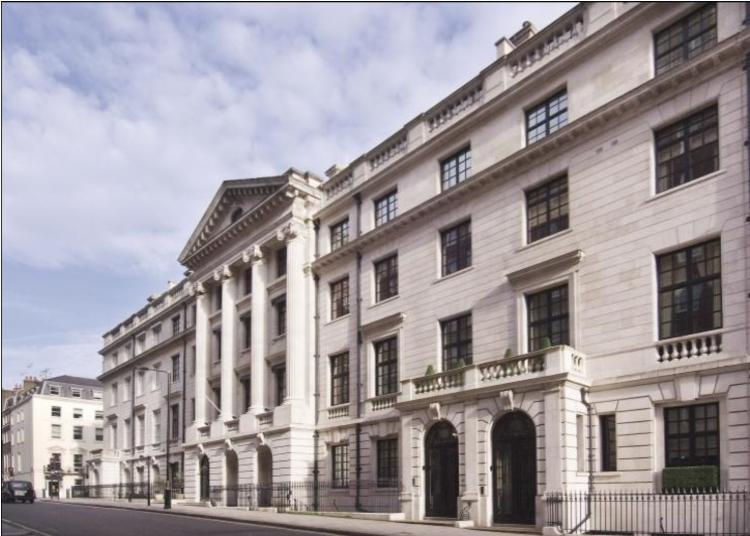 International investigators have already sequestered a billion dollars worth of property believed to have been financed from money criminally diverted from 1MDB. 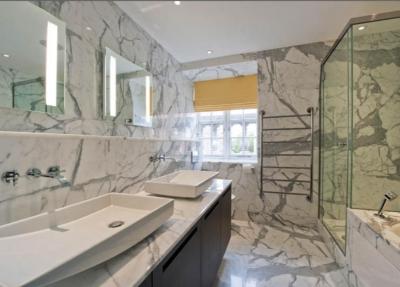 However the United States Department of Justice has indicated they believe there is at least $3.5 billion to be accounted for and the Malaysian Auditor General says the total missing in fact reaches $7 billion.

It seems highly likely that properties acquired by Obaid and his colleagues which closely relate to the injection of huge sums into their previously cash poor companies will present a future target.

Evidence shows that before the 1MDB venture Obaid was a young businessmen with limited cash and no substantial property. PetroSaudi itself was originally financed by a 100,000 Swiss franc loan from friends and the company had borrowed office space and a phone line from another company Fininfor, which was owned by his then friend Xavier Justo (now in jail in Thailand, accused of stealing PetroSaudi’s data).

Recent documents acquired by Sarawak Report indicate that Obaid is currently being directly scrutinised by Swiss Prosecutors on the basis that the money acquired by him related to 1MDB is of suspicious origin. People who have received money from Obaid have been approached to give evidence on those transactions. 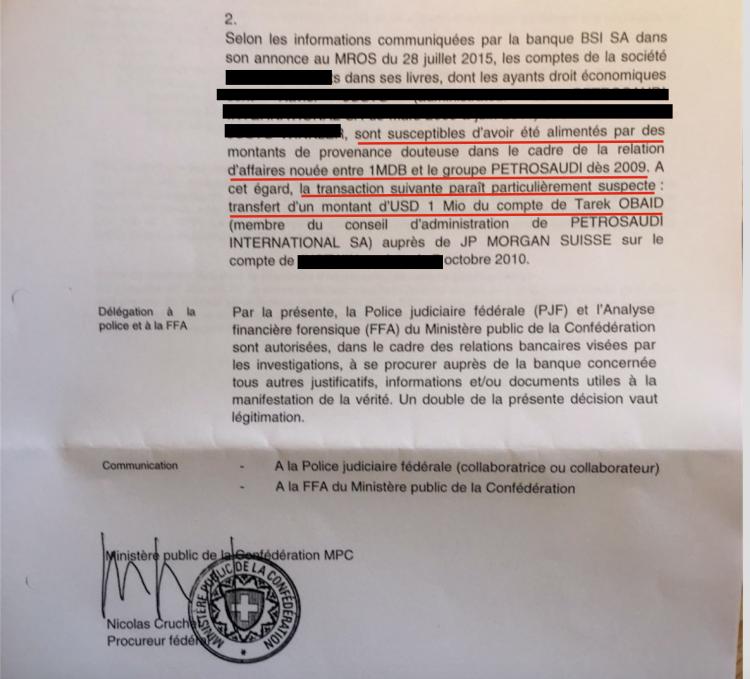 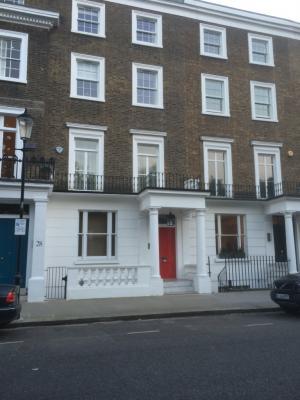 Sarawak Report has also identified another multi-million pound house in Ladbroke Square, which was similarly purchased by a fellow PetroSaudi director, Patrick Mahony, in November 2009, just weeks after the joint venture deal and bought from money passed into his accounts from the $85 million fee sent by Jho Low.

Mahony too has been questioned by Swiss and US investigators several times, according to information obtained by Sarawak Report.

Obaid is also known to have acquired several tens of millions of dollars of property in Geneva and elsewhere in Switzerland, again in the period immediately after the joint venture with 1MDB, now recognised as a scam to steal billions of public development money, orchestrated by the Malaysian Prime Minister and Jho Low. 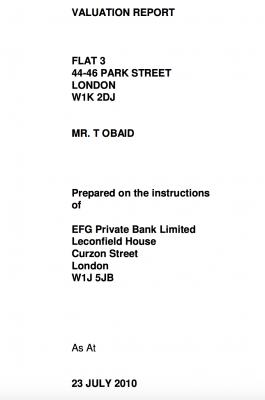 EFG Bank assisted in Tarek’s house search in Mayfair. He transferred over millions from the account which received brokerage fees from Jho Low into his London account

Documents reveal that Obaid, a Swiss/Saudi national constructed a complex web of off-shore companies to conceal his ownership of the property, aided by a series of legal and financial advisors in both Switzerland and the UK.

Emails show that Obaid had started hunting for a Mayfair property, London’s most expensive area, in early 2010, just a few months after the 1MDB heist. He eventually settled on Flat 3, 44-46 Park Street in June and had the deal completed by August.

Assisting in the house hunt and purchase were the same legal firm who managed the PetroSaudi joint venture White & Case.

A person had introduced Obaid to the private bank EFG London in Curzon Street Mayfair, whose premises were adjacent to PetroSaudi’s plush new offices rented shortly after the joint venture brought money pouring in.

EFG staff then engaged in a major house hunting exercise in the area for Tarek, who said he was in a hurry to buy, assisted by a property arm of the bank.

Meanwhile, White & Case together with off-shore legal advisors Maples worked on setting up two BVI companies for Tarek Obaid named ‘Rightview Limited’ and ‘Leftview Limited’, with the purpose of acting as the ‘nominee’ owners of the properties. 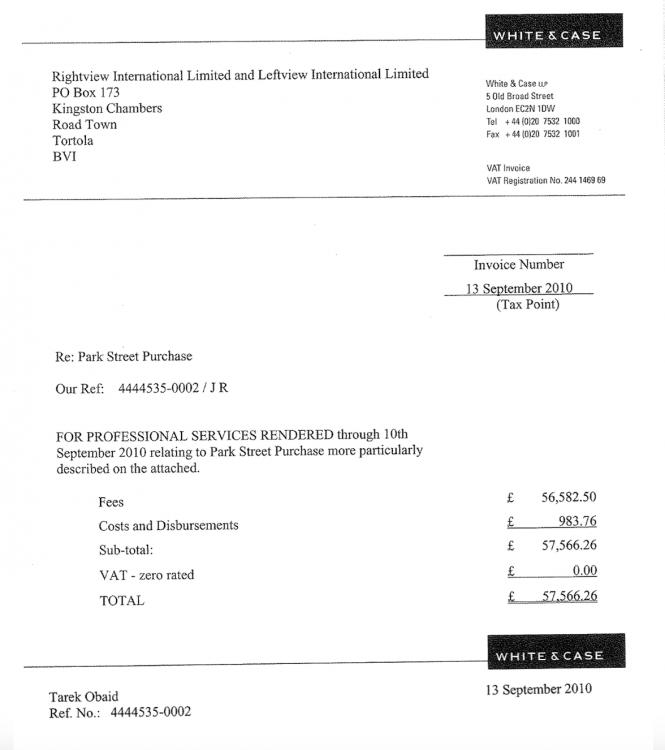 Tarek’s Swiss lawyer Carl Hegli and a colleague from PetroSaudi then posed as the Directors and minority shareholders of both Rightview and Leftview.

However, both men separately signed private documents to acknowledge that they were in fact merely nominees in favour of the beneficial owner of the company, which was Tarek Obaid. 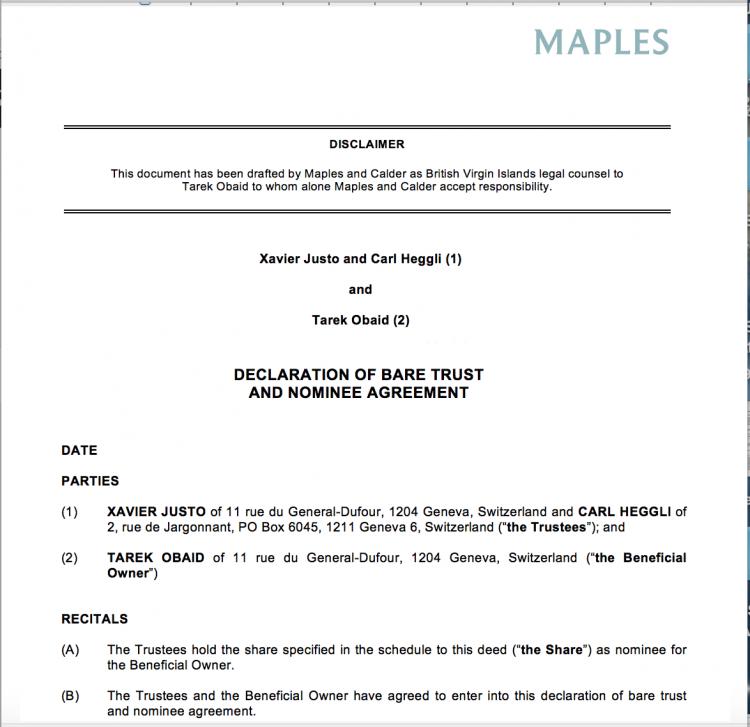 The second nominee was PetroSaudi Director, Xavier Justo, the man whom Obaid had told the press was a minor technical perso who stole company data

Likewise Hegli renounced any control over the company in favour of Obaid, but agreed to take on all the management of the companies in yet another signed agreement organised by the British lawyers who constructed the deal, White & Case and Maples.

A similar tactic had been employed by Patrick Mahony in the purchase his own property – he likewise employed two mirror BVI companies to disguise his ownership (named Mica 1 and Mica 2) in a method that is clearly becoming standard practice for those seeking to disguise their wealth. As Mahony had confided to one estate agent:

“the property I own on Ladbroke Square belongs to a company, which in turn belongs to a trust. I am the beneficiary of that trust but I am not the direct owner of the property for reasons I’m sure you’ll be familiar with”

Having set up the EFG London account, which took some time to arrange, Obaid then opened further accounts with the bank’s off-shore division in Guernsey, in order apparently to “facilitate his off-shore finances”.

On 1st June 2010 a sum of $10 million was transferred from Obaid’s JP Morgan Suisse account A/C 7573800 into the EFG account in London.  These funds were later increased to over £19 million pounds before the sale was completed in August. 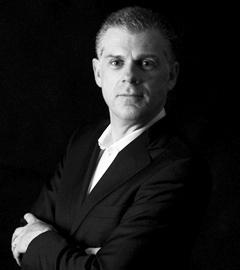 This very account at JP Morgan Suisse was the one  into which Jho Low’s Good Star Limited had secretly paid the $85 million dollar “brokerage fee” in October 2009 and then a further $68 million in January 2010, amongst other 1MDB related payments linked to the secret and undeclared use of 1MDB money to buy out the Sarawak UBG group (part owned by Jho Low) using PetroSaudi as a front.

In October of that year $15 million was transferred back out of the EFG account to Obaid’s UBS Geneva account.

Investigators are therefore likely to be seeking to determine from JP Morgan and Obaid’s portfolio managers, such as  Swiss lawyer Carl Hegli, whether the source of the cash for the purchase of Tarek’s Mayfair pad can have any other explanation apart from 1MDB.

What is certain is that the deals are there to be traced through the dollar clearing system, as  was the case with other assets which have been sequestered in the United States and London. 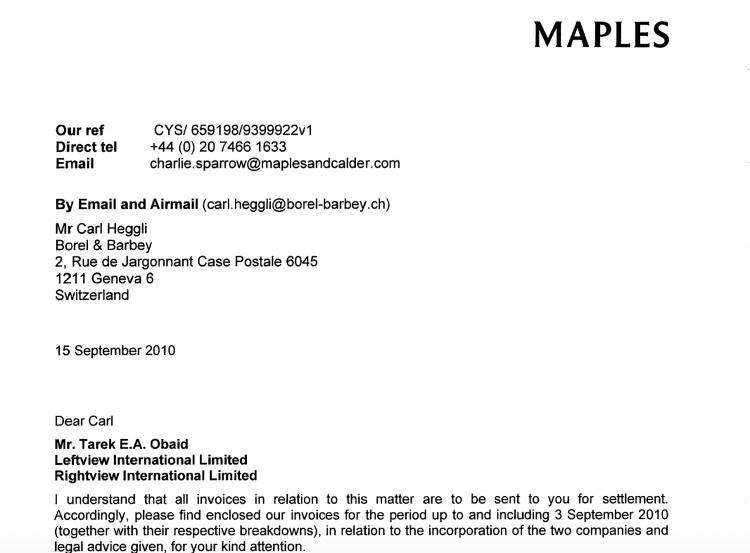