Bank Of Malaysia's Damning Letter To The Parliamentary Accounts Committee

Signed by the Deputy of the Bank Negara

Appended to the Auditor General’s report and pivotal to his findings is a damning letter from the Bank Negara (BNM) sent to the PAC, which explains in detail the disgraceful circumstances surrounding the removal of US$1.83 billion from 1MDB under the guise of a joint venture with the firm PetroSaudi between 2009 and 2011.

Written by the Deputy Governor of the Bank BNM on 23rd March, the letter outlines why the bank had issued its demand to 1MDB to return the entire amount. We attach the English translation below.

It has to be read in the light of a second letter from the Bank sent on 6th April, which has already been reported, confirming that the sole beneficial owner of Good Star Limited was indeed Jho Taek Low, who was acting as Prime Minister Najib Razak’s official advisor to 1MDB.  A huge chunk of the ‘public investment’ was therefore siphoned into Low’s private company, as has long been argued by Sarawak Report.

False and inadequate information was provided to BNM

Of key note in this crucial letter from the bank are the points that 1MDB failed in its duty to provide full and accurate information to the Bank to explain the purpose for its removal of these public funds abroad.

The letter says that there were three separate applications to export cash “(Sept 29, 2009 (first permission), Sept 6, 2010 (second permission) and May 20, 2011 (third permission)” and it alleges that 1MDB essentially lied to the bank or withheld information in order to get that permission to send the money abroad: “BNM can conclude that 1MDB had received permissions … amounting to USD1.83 billion, without providing complete material information, or through misrepresentation of relevant information, for the purpose of [influencing] BNM’s evaluation of 1MDB’s application.”

This is a damning indictment of 1MDB’s deceitful and criminal tactics, which is dealt with in full by the letter below.  However, it also raises questions about the controls within the Bank itself and why it accepted half-baked and unsubstantiated excuses of this nature?

Were the supposedly independent guardians of the nation’s wealth themselves overly influenced and swayed by the political clout of the man managing the fund – ie Najib himself?

We refer to your letter dated March 18, 2016 regarding the above mentioned matter.

1MDB had declared to BNM that the USD1 billion was used to acquire a 40% stake in JV Co which would be remitted by 1MDB to the JV Co’s account, maintained with Banca dela Svizzrera Italiana SA, Geneva and that the USD1 billion was a portion of a working capital of USD2.5 billion which will be invested by the JV Co in the abovementioned sectors. On Sept 30, 2009, 1MDB informed BNM in writing that the funds will be remitted to the JV Co’s account maintained in another bank – JP Morgan (Suisse) SA and RBS Coutts Bank Ltd. BNM acknowledged the change in a letter on the same day. However, BNM was informed by Duetsche Bank Malaysia Bhd on the change in recipient of funds to PetroSaudi, BNM stressed that the change must not go against the original purpose of the investments which have been given permission.

BNM realised that USD700 million from the USD1 billion funds that was given permission was remitted by 1MDB to an account owned by Good Star Limited (GSL) at RBS Coutts Bank Ltd and not the account belonging to the JV Co in Switzerland or PetroSaudi’s account. The transfer of funds to GSL was made by 1MDB on behalf of the JV Co to repay the JV Co’s debt of USD700 million which was advanced to the JV Co by 1MDB’s JV partner which is PetroSaudi Holdings (Cayman) Ltd. This material information was not communicated by 1MDB to BNM during the application for the First Permission although 1MDB had prior knowledge and was informed of the JV Co’s debt and had an intention of using a large portion of the funds to repay the debt before the application for the permission was made through BNM.

Based on information voluntarily provided by foreign authorities, the ultimate beneficial owner of GSL is an individual who has no relations to PetroSaudi International Ltd, which is the shareholder of PetroSaudi Holdings (Cayman) Ltd. On May 28, 2015 the Malaysian Anti-Corruption Commission (MACC) and BNM had written to the Attorney-General’s Chambers to seek Mutual Legal Assistance from Switzerland for the purpose of obtaining evidence.

However, 1MDB has since confirmed that the USD500 million was not used by the JV Co to finance a portion of the cost of acquiring a 4% equity stake in the French Company, as stated by 1MDB to BNM during the application for the Second Permission. In a letter dated May 29, 2015, 1MDB had told BNM that the JV Co had an absolute right to use all funds received from 1MDB. This is a material information that was not revealed by 1MDB to BNM during its application for the Second Permission.

However, the funds amounting to USD330 million was transferred to GSL and not the JV Co as previously stated by 1MDB to BNM. 1MDB did not inform the bank of this material information although 1MDB had prior knowledge that the funds will be channeled to GSL and not the JV Co, which is before the application was made to BNM. 1MDB has hitherto not provided any documents and source documents to demonstrate that the JV Co has invested in the oil and gas sectors with the funds agreed by BNM.

Did BNM succumb to overwhelming pressure? 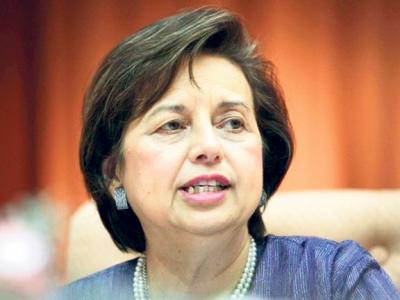 Zeti – Did the Governor of the independent Bank Negara have insufficient powers to hold 1MDB accountable?

This frank and detailed account raises questions about the robustness of BNM’s own internal checks, when faced with what was clearly an overwhelming political pressure from the Minister of Finance himself.

Clearly, on a number of accounts the bank proceeded owning to deliberate misinformation by 1MDB, including the understanding there would be an injection of a further US$1.5 billion from PetroSaudi into the joint venture as well.

Neither was the “material information” that US$700 million had been tagged as a loan by PetroSaudi onto the subsidiary which it then injected into the joint venture (with a provision for an immediate repayment) communicated to the bank or to the Board of 1MDB.  Again, at the time the second permission was granted, BNM was informed that 1MDB was investing in a French power generation company, which was false.

However, there is no indication that papers were supplied to support the bogus claim by 1MDB nor that once this problem was discovered the matter was actively pursued by the bank until the scandal broke in the media and investigations were launched last year.

Likewise, with regard to the loan for US$330 million, which went straight to Jho Low’s Good Star Limited, supposedly to purchase oil and gas projects, which again never materialised.

Bank Negara documents do show that efforts were made by its regulators to pursue 1MDB for updates on these projects.  However, their communications were arrogantly ignored or sidelined for many months by the powerfully protected management, who under the secret  Section 117 of the company considered themselves to be working solely and directly to the Minister of Finance, Najib Razak. 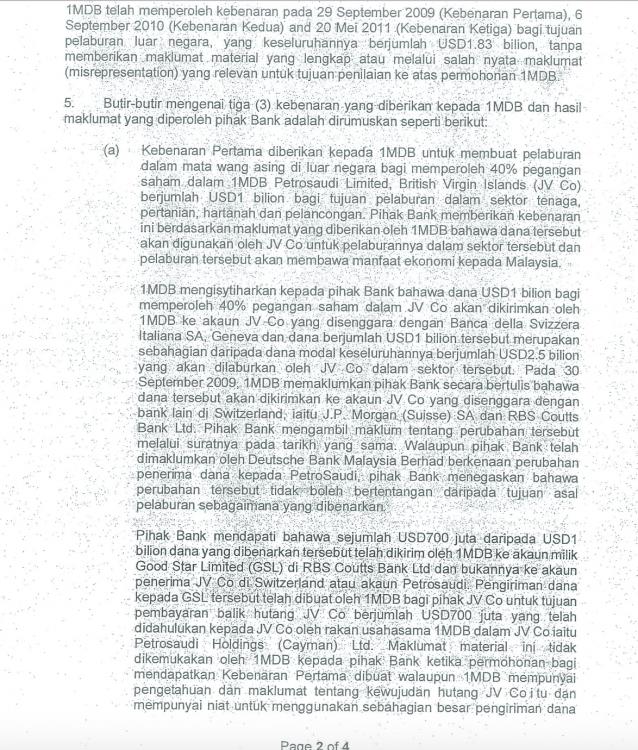 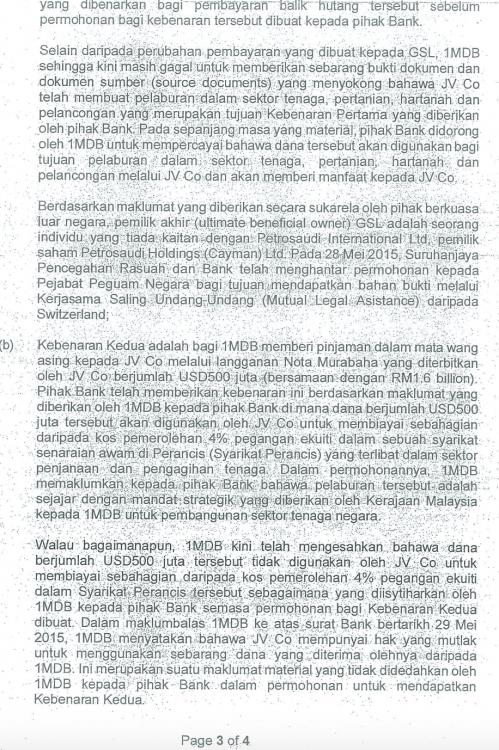 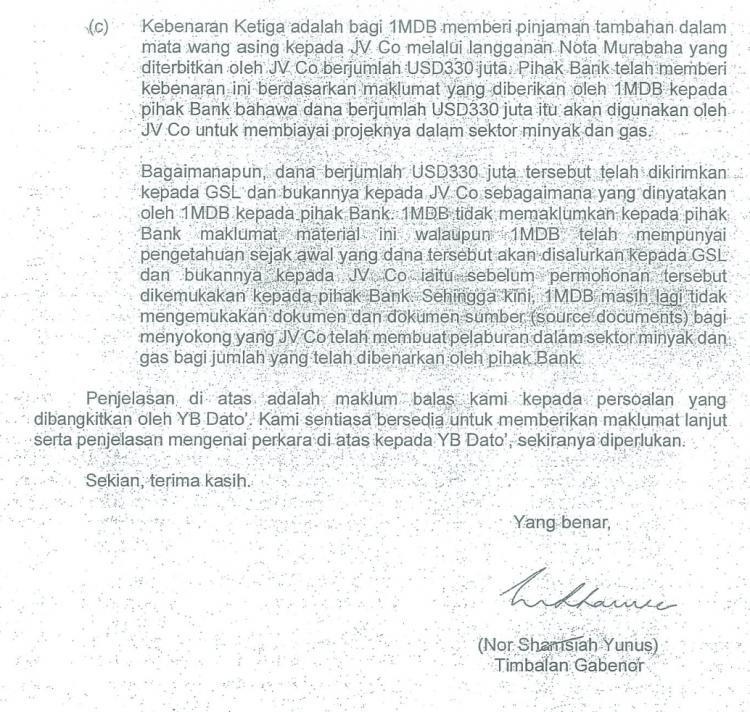