Sarawak Malaysia is an example of one of the world’s extreme criminal kleptocracies.

The reason? Sarawak is one of the richest corners of the globe in terms of resource extraction – a vast wilderness of wealth, with a weak population base of only two and a half million people.

The Mahud family got their hands on the levers of power early after independence, thanks to a blatantly manufactured ‘state of emergency’ called by the Malaysian federal government, who saw the importance of getting a client leader into position in place of the Dayak majority representative of the time.

Taib and his uncle predecessor, who pretended that they were running an independent local party PBB, cut a significant deal, which was to allow the federal government to appropriate all of the state’s rich oil reserves, as long as they could control all the timber and other land resources of the state.

Taib then proceeded to strip out the Borneo Jungle and pocketed the proceeds, in collaboration with the same handful of timber cronies, who are now funding and supporting his handpicked successor Adenan Satem in this election – these same criminal timber tycoons are even standing in a good number of the seats for good measure.

With so much wealth and so few native people, all of whom have been kept deliberately poor and deliberately in ignorance of how they have missed out on their opportunity to become comfortably off, it has not been hard to keep an iron grip on the population.

Malaysia goes through the parody of maintaining elections and a sham state parliament, which sits 8 days twice a year – mostly taken up in ceremony and the ritual throwing out of opposition members – and now, once again, it is repeating the parody of an election.

The fact that this ‘democratically elected’ Malaysian government is now by far the oldest ‘elected’ regime in the world, having achieved continuous rule since independence, is a clear indicator of just what a sham it all is.

At the centre of this particular well oiled and unbelievably well-funded election operation is Santubong, the private home of the new Chief Minister Adenan Satem, who was Taib’s college friend, brother in law and hand-picked successor and who has not changed a single fundamental in the running of the state. Neither has he even changed any of the personnel.

This state election has long been regarded as a crucial opportunity to win back political capital by Najib and it has been closely planned for months, no expense spared.

For this reason a vast, modern election fighting machine has been transported into Santubong, say insiders, complete with computer banks, white boards, speaker systems, video screens and a dedicated staff, transforming the Chief Minister’s private home into the election HQ. 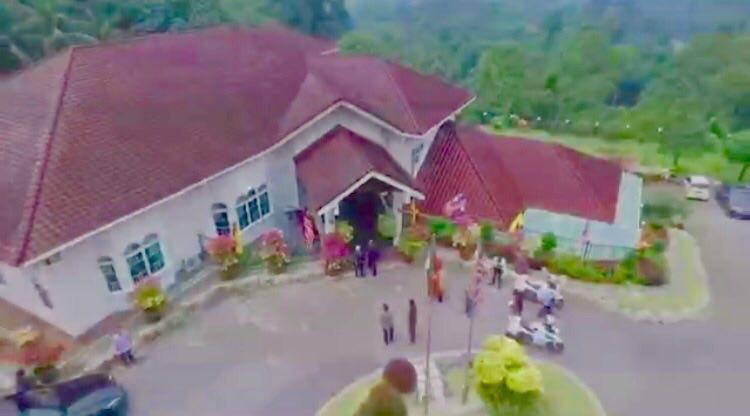 He has the entire apparatus of the state at his disposal, as well of course, including a fleet of helicopters and airplanes appropriated for party political use and also at Santubong, of course, a strong room with a huge stash of money, currently being distributed to buy votes.

After all, Sarawak is a criminal regime and it never occurs to criminals to play fair or by the rules, let alone election law.

Away from this ‘Bond villain’-style election headquarters, the rest of the BN party apparatus is housed in another public building at the expense of the state.  It is occupying the RELA (state volunteer force) building in Kuching, Sarawak Report is informed.

One might ask why does Satem bother with all this fuss and bother, since he and his party already have Sarawak so trussed up?  On the ground local communities without running water are telling reporters that they have to vote for BN, because their headman (paid by the government) has told them that if they do not they will have no hope of any assistance at all over the next five years. They will be punished by neglect, whilst obedient neighbours will be rewarded with arbitrary ‘projects’.

One wonders how much more such people could be punished than they have already been for their obedience?  In a less criminal environment such communities could take note that, to the contrary in Baram, for example, it has been the squeaky wheel which has received the oil.

Following the Baram community’s tenacious campaign to fight off the planned dam, Satem chose a week before the election to announce its cancellation.

Likewise, the urban areas which voted for the opposition last time round are now being saturated with bribes and projects, as BN tries to win them back.

But, things are not reported in this way in Sarawak. Today, BN’s client paper the Borneo Post, owned by the logging crony KTS, has published a 57 page supplement begging the population to “Give Satem A Chance”.  No mention of the fact that this man has been in government for 50 years and has had over two years in charge, during which he has talked about reform but done nothing.

The fact that this election is being conducted in exactly the same way as every previous one in Sarawak, with the same tactics (banning the opposition, handing out projects, intimidating communities, gerrymandering and direct bribery) is a sure sign that Satem has no interest whatsoever in changing anything.

Najib acts like he is fighting for hearts and minds, when all he is doing is filling pockets 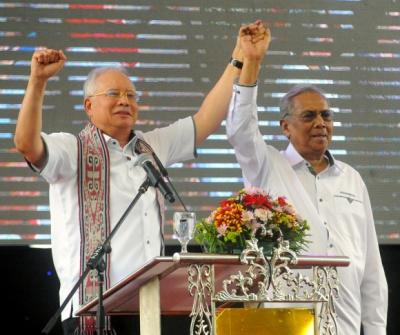 So, given that for every reason possible this election is a shoe-in, why all the fuss and bother?

Huge resources are being expended on this campaign.  The Prime Minister has personalised it to the extent that he has himself decamped to Sarawak and is touring the state as if his life depended upon turning back a tight outcome in a doughty battle for hearts and minds.

Next week he transports the national cabinet to Kuching and will then use these ‘impressive’ colleagues to fan out across the state, TV cameras in tow, to dazzle humble local communities… meanwhile, of course, most opposition leaders and civil rights groups have been summarily banned from the state and prevented from campaigning. Neither are they permitted to appear on the state controlled broadcast media or in the state licensed print media, except as butts of criticism. And the national opposition leader remains in jail.

So, why does it matter to Najib to create this farce of a genuine democratic validation by the electorate over which he holds such a total grip?

The answer of course is obvious.  In 2011 BN got a major fright when the super-rich and super-arrogant Taib lost several urban seats to the opposition, having been personally outed on several corruption issues.  Even after all the cheating, rigging and bribery BN lost 41% of the official vote.

Najib used that outcome to force out his over-mighty state subordinate and was angry that Taib was able to manoeuvre his placeman, Adenan in his stead.  Najib had planned a direct rule solution, as in Sabah.

If they can bulldoze back from that near loss of the majority vote in Sarawak last time round and present a better win, then both these BN entities will rush to proclaim what popular and successful fellows they are after all.  No matter that they are cheating…. criminals don’t think like the rest of the world – they will shout in their newspapers that the opposition has been “shown up” etc etc.

These men plan to present themselves as politicians, who won people round with speeches, vision and a record of good governance, even though the reality is that they are blatantly stuffing pockets, threatening voters and pouring taxpayers money into an election pantomime like no other.

It is a vain charade and the world knows it, which is why this Sarawak Election merely represents more wasted public money by Malaysia’s most profligate and self-deluded leader ever ….