Goldman Sachs hire by far the cleverest people around, they have us know.  And the thoroughness of their work and due diligence procedures are likewise unmatched.

Which is why the more one researches the bank’s former South East Asia boss, ‘Dr’ Tim Leissner, the more embarrassing the matter gets.

Sarawak Report has already exposed Leissner for boasting a fake doctorate, something the egg-heads at Goldmans apparently missed… or worse, chose to ignore.  Things get no better when you delve into the rest of the banker’s CV. 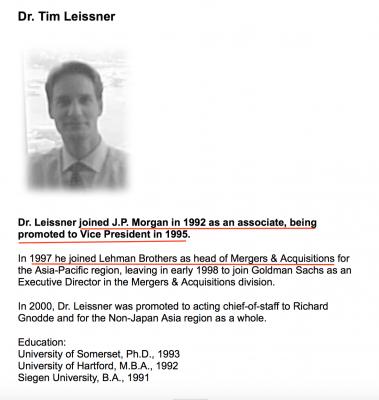 The most cursory of examinations throws up discrepancies in Mr Leissner’s personal story above.  In particular, he consistently boasted of past posts at Lehman Brothers (handily now defunct) and before that JP Morgan, where he had progressed to Vice President, according to a much published CV.

A regular ‘Broker Check’ with the authority shows the job history he provided to the regulator – something anyone would think twice about lying about:

Teaching in a school in Germany?

These details state that for the period 1987-2006 Leissner was in fact employed by a school in Loolfsburg Germany.

Contrast this with the packed CV for that period regularly publicised by him during his employment at Goldman Sachs.  This details a degree, masters and Phd, obtained between 89 and 93, followed by a job at JP Morgan between 92 and 95 (overlapping the Phd) and Lehman Brothers from 97-98.

Surely such discrepancies ought to have been picked up and then easily checked out by Goldman Sachs?

Thankfully, researchers have at least confirmed Mr Leissner’s German degree.  And he appears to have got his Hartford MBA through the American university’s “Paris program”, which began in 1985 and lasted for 10 years. According to Hartford’s Barney School of Business website, this involved ‘distance learning’ with the average graduate taking 36 months to complete a degree.

“Timothy Leissner appears to have been a trusted and capable salesman for Goldman Sachs. The hard evidence of this trust is he lead Goldman Sachs’ placement of billions of dollars in bonds for 1MDB, the Malaysian Sovereign Wealth Fund.  As a regular part of his duties for Goldman Sachs, Tim Leissner dealt with prominent politicians from several governments.  Yet his biography contained 2 waving red flags. One would think that someone at Goldman Sachs would have noticed his doctorate was from a diploma mill. At a minimum a Ph.D in a year beggars belief.  The second is the incongruity between the biography published in all of the conference brochures and the biography he supplied to FINRA as part of obtaining his US securities licences. The former had him working for Lehman Brothers and J.P. Morgan.  However, in Leissner’s disclosure of previous work history to FINRA Lehman Brothers and J.P. Morgan are not mentioned.

According to the FINRA record, at the same time his conference brochures have him in high finance in Asia, he was working at a high school in Wolfsburg, Germany.  Mind you, either history is fine. However, either one, or possibly both, histories are plainly incorrect”.

Given these misrepresentations it is perhaps not so surprising that the 1MDB bond offerings masterminded by Leissner are also riddled with blatant misleading information.

Take, for example, the US$3 billion offering made in March 2013, ostensibly to support investments under the so-called ‘Strategic Partnership’ with Abu Dhabi.

As in previous 1MDB bond offerings Goldman Sachs presented the fund to investors as a tightly managed company, controlled by its Board of Directors.

1MDB has a stringent risk management control function, with the Board of Directors holding ultimate accountability for the risk and related control environment and being responsible for approving and reviewing risk policies and methodologies. The Board of Directors is supported in this task by board delegated committees for reviewing and challenging risk information, which in turn are supported by a Risk Management Department, along with strategic business and support units. 1MDB also has stringent ‘Chinese wall’ and whistle-blower policies in light of the sensitivity of its projects and investments.

In fact, as Goldman Sachs ought to well have known, the articles of 1MDB gave total and arbitrary personal power over all decisions to the Finance Minister, who was the sole shareholder and signatory of the fund, under the special provisions inserted under Section 117.

After all, Mr Leissner and his team were paid hundreds of millions of dollars for their high flying services on the deal, so how could they have neglected to impart such a vital piece of information, which undermined all the supposed ‘strong risk management’ it was claiming for its bond holders?

It is those self-same bond holders, who are now facing a catastrophic default situation on their investment. 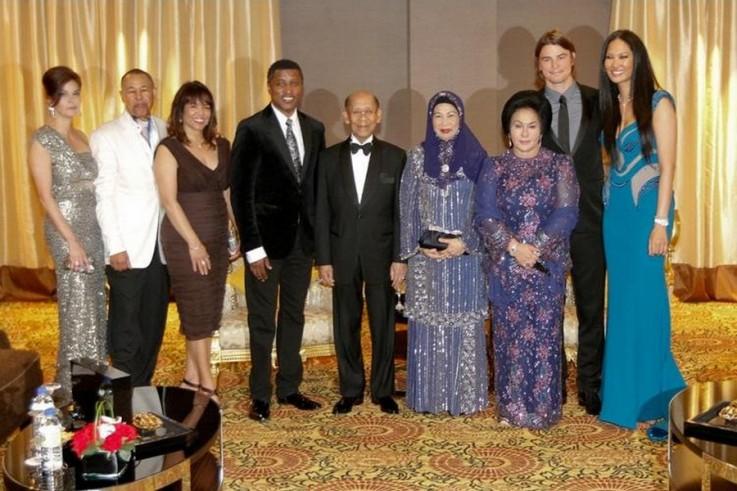 On an entirely separate 1MDB related matter, a sharp eyed reader has pointed out a very interesting figure from our reporting on the money sent by Jho Low’s various companies to PetroSaudi director Tarek Obaid on 29th September 2009.

This was the same day that US$700 million was wired from 1MDB to Jho Low’s company Good Star Limited’s account in Zurich (allegedly as part of the PetroSaudi joint venture).

Together these payments add up to exactly 15% of $700 million wired to Good Star on the same day from 1MDB ($105 million). Was this breaking up of the payments designed to disguise the round figure kickback?

Meanwhile, the $33 million payment to fellow director Patrick Mahony is a mere $2 million short of a tidy 1/3 for him ($35 million) of that cut. The hunt is on for that missing $2 million!