When it was announced Monday 29th February that Najib had gone on a 4 day ‘working visit’ to Saudi Arabia and would be “making a keynote speech” at the Jeddah Economic Forum today March 1st, there was considerable surprise.

After all, it was the first anyone had heard about such plans.

Various people naturally googled the information on the Forum, a commercial event which raises money from sponsors and attendees, but there was no mention of Najib.

This was raised in several comments back home in Malaysia.  If the PM was speaking, people asked, how come there was no mention of him gracing the event? 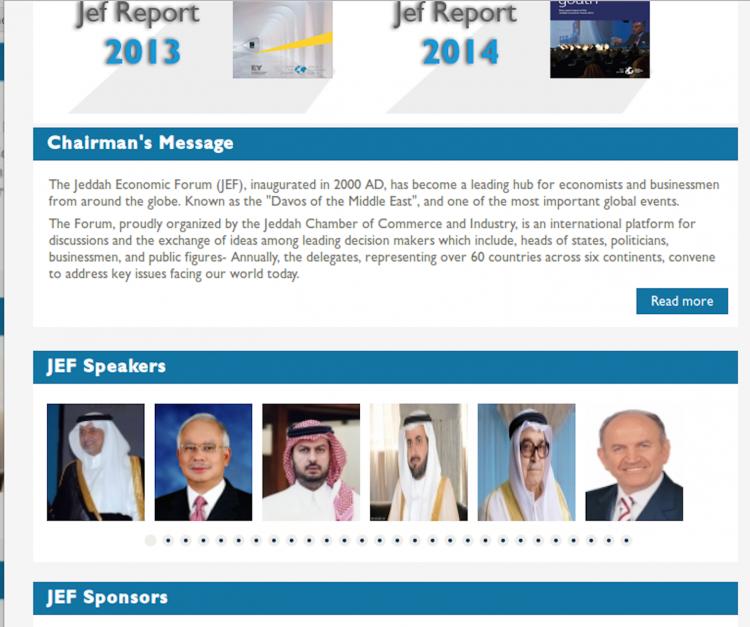 At which point, lo and behold, today 1st March, the very day of the projected speech Najib suddenly appeared (above) in the line up of speakers, pushing his way in at number two in the advertised line up! 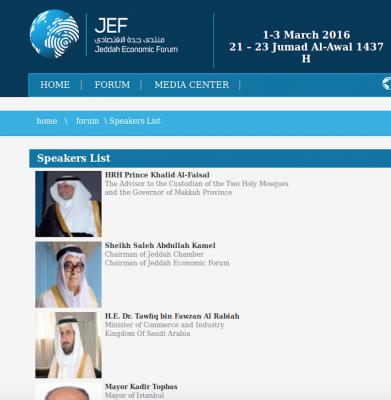 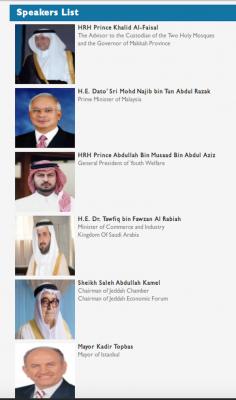 By Tuesday he had popped up as the second speaker!

Was Najib such a nonentity that the Saudi forum had simply failed to remember to slot him into their line-up and needed to be reminded?

Or was it simply that, having perhaps received a series of questions indicating that the Wall Street Journal had now corroborated Sarawak Report’s earlier story that more than US$1 billion had in fact been in Najib’s ‘donor’ bank accounts (rather than the previously admitted US$681 million) the beleaguered PM decided he needed a foreign distraction?

After all, Najib had refused to respond to the WSJ series of new allegations on 1MDB, which they published Tuesday.

These included the information that US$2.4 billion had been paid from 1MDB, supposedly to its ‘partner’ the Abu Dhabi fund Aabar, but had actually been detoured into a bogus BVI company with a very similar name, which then appears to have channeled money into Najib’s own account in KL.

The paper, according to convention, would have put their questions to him about this highly embarrassing new information at least a couple of days in advance – probably just before last weekend. 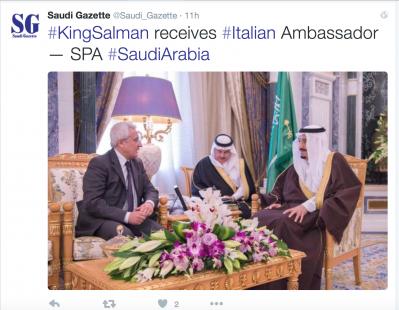 Is that what sent the PM scuttling back off to Saudi Arabia on the excuse that he had important speeches to make?

Certainly, today enquiring journalists were told Najib was too busy on his trip to respond to questions.

There is also speculation that Najib’s agents believe they have made progress in persuading Saudi officials to make some statement indicating that his “donation” had indeed come from Saudi sources.

Perhaps Najib hopes that being on the ground could clinch this campaign to nail down his cover-story, in return for whatever inducement can be offered?

Malaysian troops on the ground in Yemen?

Meanwhile, Malaysia’s first couple have taken the opportunity to do yet another public round of contrition, attending yet more pilgrimage sessions and prayers. 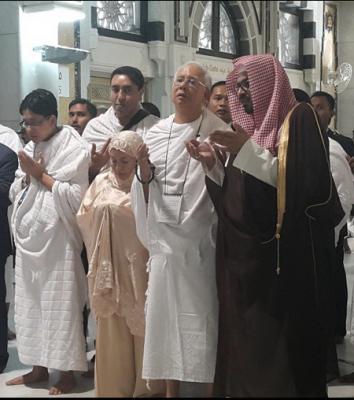 Twice in 6 weeks? Are Najib and Rosmah becoming nuisance guests in Saudi?

On the other hand, if certain Saudis had been ready to make some such diplomatic announcement to help Najib through his mess, then this boosting of the figures by the WSJ to almost double the original alleged “donation” may give them pause for thought.

They would have to admit to a one billion donation rather than a US$681 million donation.  Might this figure rise even higher as more uncomfortable facts leak out about Najib’s huge, unexplained accounts?

Meanwhile, Sarawak Report notes that although Najib’s photo is now injected into the Speaker’s List there is still no adjustment made to the forum’s programme schedule, which fails to mention him once in the two day programme of events.

So, where and on what subject was Najib’s keynote address to be given?  Finally, the news has filtered out of his appearance at the opening ceremony on the evening before the main event – phew! 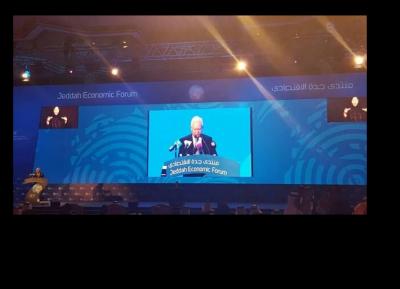 But, after all, this forum, like similar events, is a commercial enterprise where sponsors pay for prominence and speaker slots.  All Najib needed to do was stump up more of Malaysia’s cash to achieve his last minute accolade according to the online site:

So, once again, Najib has been boasting of special Arab cooperation and ties to cover up a bought arrangement.

He will be working hard to get his audience with the King, in order to boast once more of his “close working relationship” with the Arab Kingdom, but it is possible this royal target may not be available quite so easily Last Minute.com as the Jeddah Forum.

Particularly given the growing sensitivities and the fact that Najib and his wife appear recently addicted to these Saudi visits – the last was just six weeks ago.

Yet for Malaysians the most breath-taking aspect of this window-dressing tour will perhaps be the content of the hastily added “Biog” accompanying Razak’s entry into the Speakers’ List of the Jeddah Forum.  The man who has just shocked the world opinion and been condemned by legal and civil society groups over his outrageous crack-downs on basic civil liberties, describes himself thus:

“When he became Prime Minister in April 2009, critics called him the ultimate insider. But he has taken many by surprise, implementing the most far-reaching political and economic reforms since Malaysia’s independence.

His Government Transformation Programme has fundamentally changed the provision of government services – improving education, widening access to healthcare, developing rural infrastructure, expanding public transport, reducing poverty, cutting crime and corruption and bringing down the cost of living. Alongside this, his Economic Transformation Programme has significantly liberalised the economy – creating more than 300,000 jobs, raising living standards, encouraging foreign investment and turning Malaysia into one of Asia’s most dynamic and successful economies.

The Prime Minister has also introduced the ‘1Malaysia’ concept, stressing the importance of national unity regardless of race or religious belief. 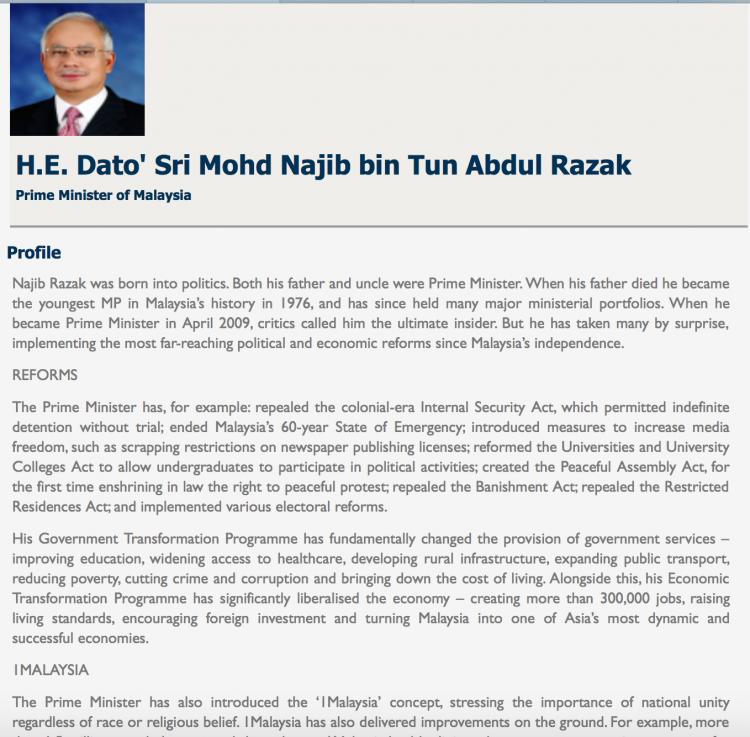 Malaysians will not know whether to laugh or cry. Has this Prime Minister and his officials simply failed to notice the impact of his actions over the past year, dedicated entirely and without exception to protecting his own political position at the expense of all the claims he has made above?

Do they think that the rest of the world has failed to notice also?