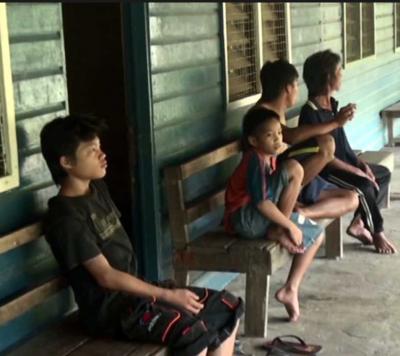 Huge sums of money have vanished from the official fund entrusted with managing the savings of Sarawak’s most disadvantaged people, the Native Customary Landowners of the state, according to documents obtained by Sarawak Report.

The finding ends trust in the state government’s claims to be the guardian of the interests of the native poor and raises acute concerns over the viability of ASSAR, as well as other state funds, which have failed to give adequate disclosure about their assets.

Indeed, our evidence shows that instead of building the value of savings, via prudent investment, the money which was forcibly taken from native families, has been ploughed into loss-making enterprises associated with the rich and powerful political elite, operating behind a veil of secrecy in the financial management of ASSAR.

Figures show that at the present time* the unit value of Amanah Saham Sarawak Berhad (ASSAR) stands at a mere 17 sens, compared to the minimum level guaranteed to investors of RM1.00 by the state.

The shocking discovery leaves taxpayers liable and indicates that, after years of saving, native families can only expect to get the barest minimum of a return on their investments, in the event of a far from certain bailout by the state.

Sarawak Report has obtained a review of ASSAR by the Securities Commission, which was prompted by concerns about the fund. The report, which has been kept secret since it was published in July 2012, revealed that the net asset value of the fund (i.e. the value of its assets on the stock market) had plunged to just 25% of its liabilities by that date.

In a summary of the performance of the fund it was noted that a staggering 82 of its 90 chosen investments (‘counters’) had lost money totalling RM46.7 million over the past year, leaving it after a long period of fluctuating poor performance worth only 25.5% of the minimum price guaranteed by the state of RM1.00 per unit.

NAV means Net Asset Value – Securities Commission Report 2012.  Only 8 out of 90 investments did not lose huge sums of money!

Further figures obtained by Sarawak Report, confirm that by that 2014 the value of the fund had plunged even further to just 17%, despite a number of injections of support by the State Government.

In other words, far from increasing the nest eggs of poor families, the state has presided over the disappearance of more than 80% of the money invested by nearly 72,000 Sarawak savers with ASSAR.

Most of these individuals concerned are vulnerable native customary landowners, who were forced by the state to invest in the fund.

“We note that ASSAR’s fund’s NAV [net asset value] is insufficient to cover full redemptions from all 71,874 accounts…” said the 2012 report. 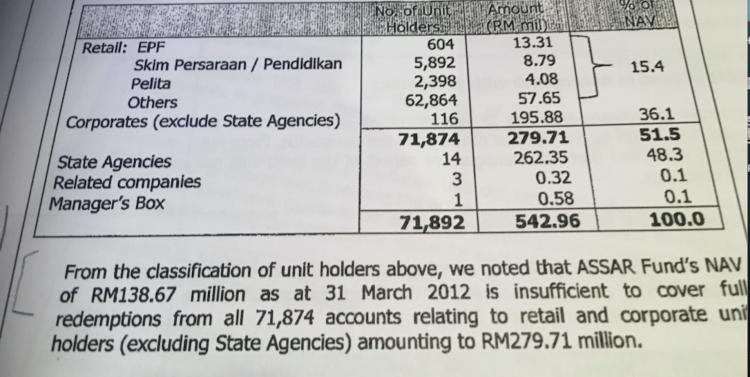 Assets just a fraction of the minimum guaranteed unit value

From the figures detailed the report (above) it can be seen that while ASSAR’s net asset value in March 2012 was only RM138.67 million, the guaranteed minimum redemption value of it total number of units was a whopping RM542.96 million.

It is simple to calculate that this represented a RM404 million shortfall, meaning the fund was only worth 25% of its benchmark value at that time in 2012.

Worse, Sarawak Report has obtained later figures which show that by the end of December 2014 the crisis had deepened, despite two separate injections of RM50 million by the State Government in the intervening period. By that date the shocking shortfall in the fund had reached RM446,627,310 million ringgit, according to a summary of the Financial Records in our possession: 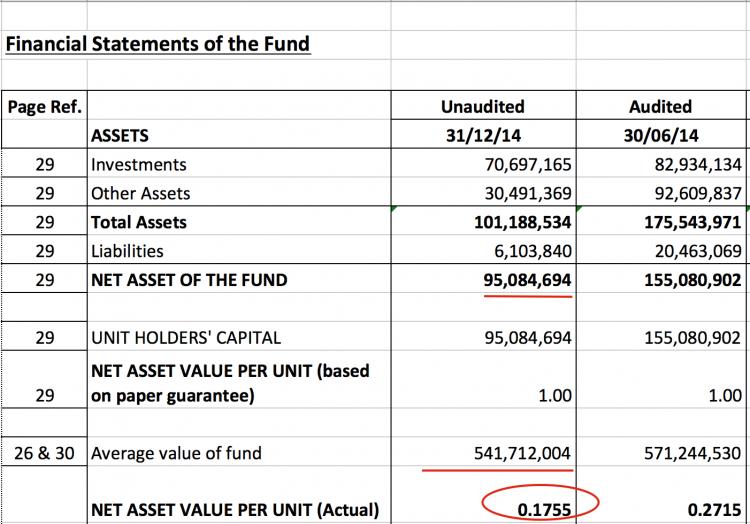 The shortfall figure represents the difference between the minimum owed to present investors, which was RM541,712,004 (based on the guarantee of RM1.00 per unit by the state), and the actual net asset value of the fund, which had fallen to a paltry RM95,084,694 – 17% of its guaranteed value. 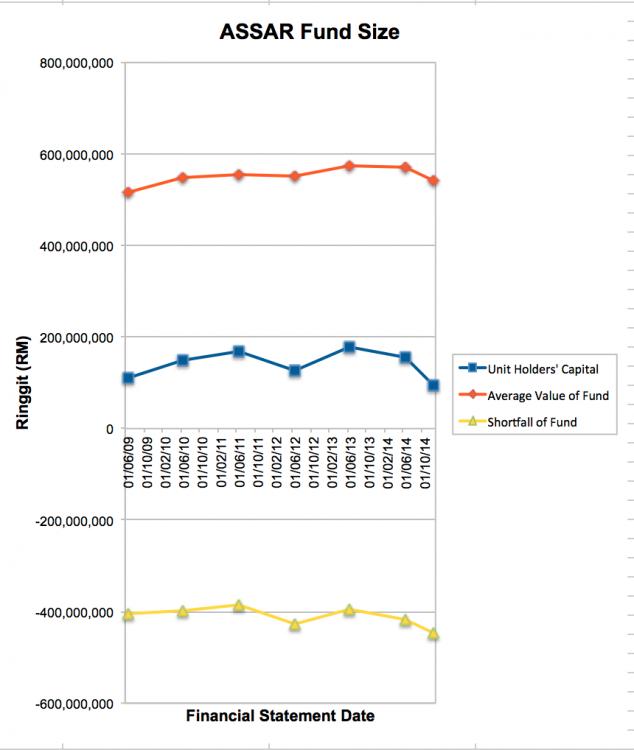 Where have the native Sarawak landowners’ promised nest eggs gone?

Contacts close to the fund have further confided to Sarawak Report that the ensuing past year has been dire for the fund, indicating that in the run up to the coming election the figures have got even worse than those indicated in the graphs above showing where matters stood in December 2014.

It represents a devastating loss of nearly half a billion ringgit, which has gone missing from the fund entrusted with protecting the compensation money awarded to Native Customary for the confiscation of their territories (in most cases illegally, by the state’s so-called Land Custody and Development Authority, known as Pelita).

The consequences for native people are devastating.

When ASSAR was set up in 1993 the then Chief Minister, Finance Minister and Resources and Planning Minister and present Governor, Taib Mahmud, presented it as a way of introducing vulnerable native communities to modern saving practices. 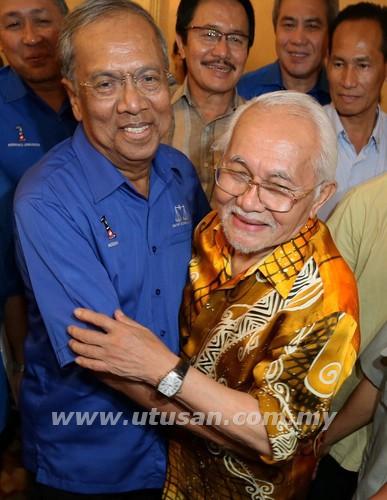 His government had forcibly and illegally alienated vast tracts of land belonging to Native Customary Landowners, in order to make way for lucrative logging and plantation concessions, which were primarily handed to companies owned by his own family and key cronies.

The compensation payments to natives represented a pathetic fraction of the true value of their territories, thanks to the arbitrary payouts determined by the State Government, but even so the all-powerful Chief Minister was not willing to allow them to have the money directly.

A scheme was set up to divert their payments into ASSAR, where they were placed under a so-called ‘moratorium’, meaning that their forced investments could not be removed from the ‘trust’ for a minimum of five years.

People close to the fund have confided to Sarawak Report that for several years the payments to those withdrawing from the fund have been financed directly by the money coming in from new forced savers, rather than the supposed profits from wise investments – the definition of a Ponzi scheme.

“Sarawak’s Native Landowners Fund is nothing more than a forced Ponzi scheme on the brink of collapse. It makes the problems of Tabung Haji look minor by comparison.  The Bank Negara Governor issued a warning when that fund fell to 90% of its unit guarantee. These figures show that Assar has plunged to a pathetic 17%”, one former employee of the fund recently told Sarawak Report.

The current shortfall means that if only a small percentage of the present investors were to exit the fund there would be no money left to pay the remaining unit holders who were forced to hand over their money.

So much for conserving native wealth and so much for introducing natives to modern saving practices!

The reasons behind the fiasco are clearly indicated in the damning 2012 report, following an investigation by the Securities Commission, after concerns about the fund’s mismanagement were reported by staff insiders.

Sarawak Report has a copy of that official report, which has predictably been kept secret from the public. A statement by the Auditor General last year further hinted at the very same problems with the fund.

In the report the Commission detailed numerous failings in the management of the fund, including inadequate supervision and attendance by key board members.  MP Alexander Linggi, for example, and former State Secretary, Tarmizi bin Sulaiman, were recorded as having failed to attend numerous meetings. 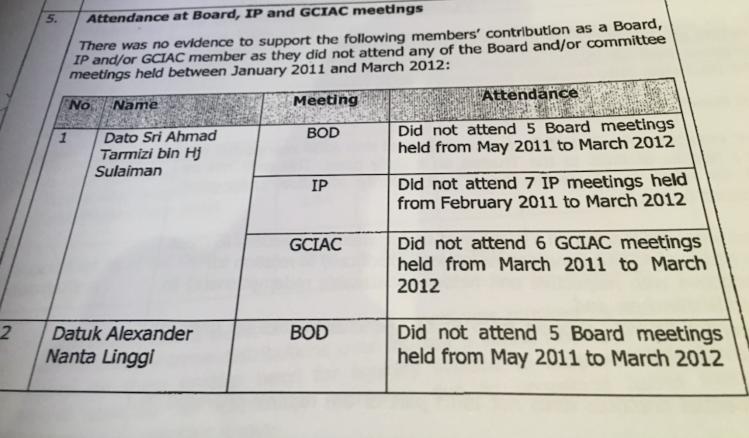 No show from BN crony Board Members

Furthermore, shocking failures in compliance included a lack of any supervision over potential conflicts of interest amongst key directors and executives over the companies into which money was being invested.

It means there has been no system in place for preventing corrupt investment decisions at the loss-making fund.

The same staffer added that they suspected that self-interested investments in crony companies and loss making enterprises linked to interested parties was the key reason for the loss of hundreds of millions of ringgit of investors’ money.

Landowners not told how to get their money out!

There is no obvious legitimate reason for ASSAR to lose money, explain insiders, because the government has made numerous licences and concessions available to the public companies which are supposed to be generating the income to sustain the fund’s investments.

Yet somehow nearly all these companies are losing money or not reporting profits to the fund’s managers.

“Money that should go back to the fund simply does not come onto the books”, one financial employee has told Sarawak Report. “Profits due back to the fund from these companies it is investing in don’t seem to be registering”

The consequences for Sarawak’s humble investors have already been far reaching, with the Securities Commission report detailing numerous cases of late or staggered payments by the fund to those attempting withdrawals.

Worse, the report noted that no effort is made by the fund to provide the necessary forms and information to new investors to help them understand how to remove their funds at a later date.  Such a basic lack of provision, as the report makes clear, amounts to deliberately obstructing the small and inexperienced rural investors, making it extremely hard for them to access their own cash.

The report highlights how there have been illegal lengthy delays in paying investors when they do attempt to remove their money, which is clearly the product of its cash-strapped position. 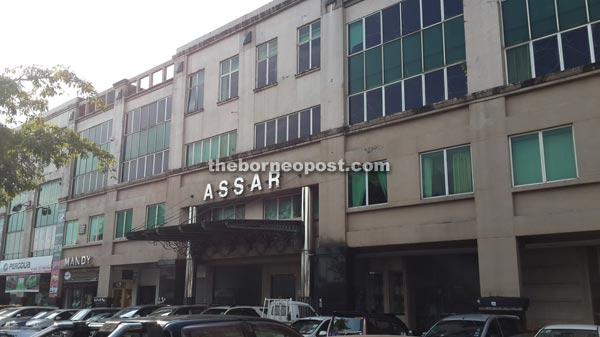 The practice of paying dividends is also sporadic and lamentable when it comes to small unit holders the report confirms. Dividends which ought to be higher than the base rate of interest have in fact been even lower, according to the figures, despite the fact that the State Government has started to intervene to support the payout

In 2012 a measly 1.5% dividend was paid says the report, 66% of which was in effect subsidised by the state government owned holding company PASB: 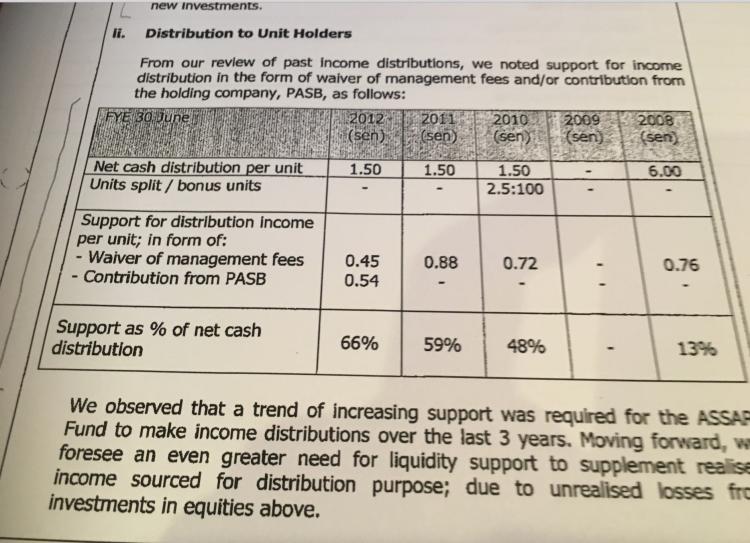 In the absence of profits paltry dividends have been effectively subsidised

Since the native villagers (whom ASSAR was supposed to have educated in the art of saving) have been left unsure by the fund as to what to expect, they often receive no dividends, say complainants, apart from sporadic handouts, usually by BN politicians around Christmas or election time.

According to the indigenous rights campaigner Peter Kallang, his village Ikang-Banyok, which was “developed” over 10 years ago, has received nothing from their investment in ASSAR.

“The SLDB [Land Development Board] come round before Christmas with a ‘gratuity’, but no dividend from ASSAR at all. They give it in cash to the landowners, one by one, from RM200 – around RM6,000. We don’t know how much money is invested in ASSAR. None of the villagers have had statements for the last 3-4 years.  They would say that once the land was developed they would pay bonuses at the end of the year, but so far nothing.”

At least with an election around the corner ASSAR fund holders can probably expect a small handout some time soon.  But, as taxpayers they may soon have to also help shell out the money to bail out the fund, which has mysteriously lost so many tens of millions to its suspect investments in Sarawak’s crony companies. 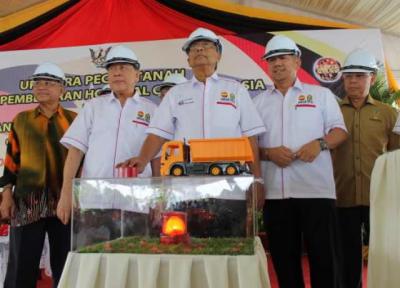 Adenan praises ASSAR while the fund whittles down to near zero

ASSAR’s Executive Chairman in charge of the Board of Directors is the ubiquitous Tan Sri Datuk Amar Haji Bujang Mohd Nor (also Chairman of controversial logging outfit Harwood Timber and Board Member of the Sarawak Timber Industry Development Corporation).

Also on the Board is the equally ubiquitous JC Fong, the former State Attorney General of Sarawak and legal fixer for Taib Mahmud.

Protected by secrecy, these managers have allowed the disappearance to take place of almost the entire sum of money invested by Sarawak’s native people as the remaining benefit from their inherited lands.

Welcome to Sarawak’s own financial scandal – one of many and every bit as shocking as 1MDB.

*latest figures available are end of 2014