Jho Low Is Confirmed As The Sole Shareholder Of Good Star - MAJOR EXCLUSIVE! 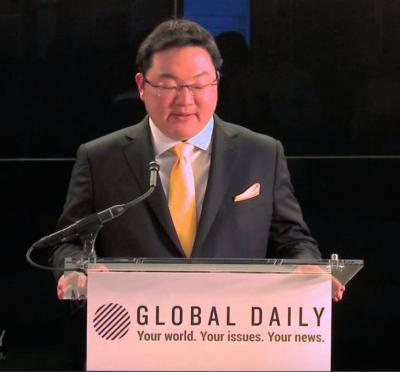 Low promotes himself as a philanthropist at the UN Foundation

Sarawak Report can reveal that documentation submitted to various international regulators has now confirmed that the sole shareholder of the Seychelles company Good Star Limited was indeed the Prime Minister’s official advisor at 1MDB, Jho Low.

It means that the London office of the company PetroSaudi International lied on several occasions, when it claimed that Good Star was one of its own subsidiaries, and that Sarawak Report along with other media have been entirely correct in asserting that Low was the owner of the company instead.

According to this official evidence, Good Star Limited was incorporated on May 18th 2009 in the Seychelles and the only shareholder was named as Low Taek JHO.

Low gave two addresses to the Seychelles registry, through his agents, Offshore Incorporations (Seychelles) Limited, one in Tanjung Banga Park, Penang and the other in Dublin Road Singapore.

He also provided his Malaysian passport details, which were updated when his passport was renewed on 18th January 2014.  The passport no A31894249 gives his date of birth as 04/11/1981 and place of birth as Palau Penang.

The documentation further establishes that there is also only one named director of Good Star Limited in the Seychelles records, which is another company called Smart Power Limited.

Smart Power Limited was incorporated on the very same day in the Seychelles as Good Star Limited, according to the information passed to international investigators, and it is a mirror company of Good Star – again the only shareholder is Jho Low himself, who submits the same set of details for both companies.

Finally, it is recorded that Good Star was dissolved in the Seychelles on 2nd May 2014, shortly after Jho Low’s BSI Singapore bank account (which received US$ 528,956,027 from Good Star’s Coutts Zurich Account) was itself closed that February. 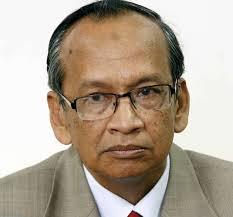 The damning information dispels all remaining doubt that almost US$ 1.5 billion was diverted from the 1MDB PetroSaudi joint venture into the hands of Jho Low, despite attempts to pretend that Good Star was merely a subsidiary of that joint venture.

Several regulatory and enforcement agencies have now accessed this data, as part of the on-going international investigations into the disappearance of money from 1MDB and the details emerge on the eve of the publication of the Malaysian Auditor General’s own report on the scandal, due Thursday December 17th.

Yet, in its submissions to the AG’s enquiry, 1MDB is understood to have produced a formal letter from PetroSaudi, still claiming that Good Star was one of its own subsidiaries.  If this letter was designed to represent proof that no money was removed from the joint venture it contradicts the official evidence and is simply untrue.

The ownership of Good Star Limited became a pivotal issue following the publication of numerous documents by Sarawak Report in March, showing this company was the beneficiary of the RBS Coutts Zurich account number 11116073, which creamed off US$ 700 million from the original US$1 billion supposedly invested into a joint venture with PetroSaudi.

Email trails show that 1MDB’s CEO, Shahrol Halmi, was aware of this fact and that Jho Low was copied in on the deal: 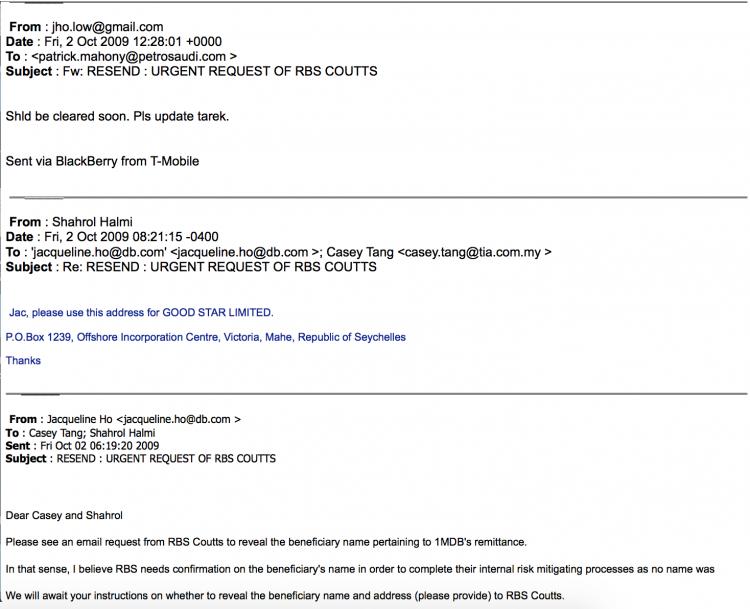 Later, as Sarawak Report has detailed, several more hundreds of millions of dollars were also diverted into Good Star from the joint venture.

With this fact established and now acknowledged by all parties, 1MDB and PetroSaudi executives have attempted to defend their actions by alleging that Good Star was a subsidiary of PetroSaudi and therefore somehow linked to the joint venture. 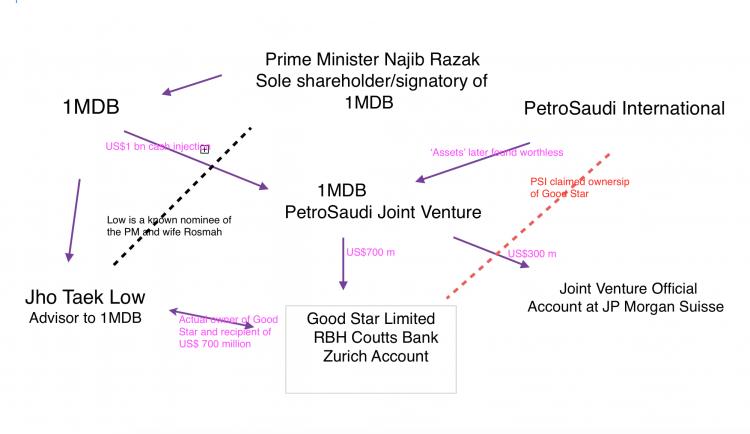 How money was siphoned off to Good Star through the joint venture, thanks to false claims by PetroSaudi that it owned Good Star, which was actually Jho Low’s secretive Seychelles company

Good Star Limited is incorporated in the Seychelles, which conceals company ownership from public scrutiny, however Sarawak Report from the start has pointed to clear evidence that the company was in fact owned by Jho Low, not least because documents show that his deputy Seet Li Lin was the signatory of the company.

The Business paper The Edge has also clearly listed the documentation that showed Jho Low controlled Good Star, in its review of the dossier on PetroSaudi provided by former Director Xavier Justo in July:

Yet, despite the copious evidence demonstrating Low’s ownership, there have been numerous attempts to disguise the truth. This included emails sent to 1MDB executives by PetroSaudi’s lawyers from White & Case at the time of the $700 million transfer, which incorrectly said that the Coutts account was  “in the name” of their company rather than Good Star.

Ahead of tomorrow’s funding and completion, please refer to the below points and the attached files.

(b) Account details for payment of 700,000,000 USD to an account in the name of PetroSaudi International Limited (Saudi)

After the scandal broke this year, 1MDB repeated this false claim in a statement to the New York Times backed by the formal letter from PetroSaudi, which has now been passed on to the Auditor General.

The claim directly contradicts information provided from 1MDB’s own Board minutes and by Bank Negara, which makes clear that the Board and bank considered they were misled by the fund’s own top executives and PetroSaudi’s directors over Good Star’s ownership.

Bank Negara has now publicly demanded that all the money paid into the PetroSaudi joint venture should be returned, because it was exported under false pretences.

Likewise, minutes of the 1MDB Board below, confirm their discovery that huge sums of money was sent to the unauthorised Coutts account, which is described as “unrelated to the joint venture” (ie Good Star):

During a meeting on Sept 26, 2009, the Board of Directors approved the transfer of USD1 billion to the account of the joint-venture company to secure a stake in 1MDB PetroSaudi Ltd.

On Sept 30, 2009, Bank Negara had approved the transfer to the joint-venture account at JP Morgan SA and RBS Coutts Bank Ltd (Geneva).

On the same day, it was found that USD300 million was transferred to an account number 7619400 at JP Morgan (Suisse) SA, which is 1MDB PetroSaudi Ltd’s bank. [sic]

However, the balance of USD700 million was transferred to account number 11116073 at RBS Coutts Bank Ltd, which is held by a company which is not involved in the joint-venture.

The Board of Directors have never approved the transfer of money to two separate accounts.

It was found that the 1MDB management had given the wrong information to Bank Negara, since money was transferred to an account which did not belong to the joint-venture company.

If I knew I wouldn’t tell Sarawak Report

Given the mounds of evidence uncovered about the collusion of PetroSaudi in the 1MDB heist masterminded by Jho Low and now this latest proof from Good Star’s own incorporation records, Sarawak Report wrote last week to the company’s President, the prominent British businessman Rick Haythornthwaite. 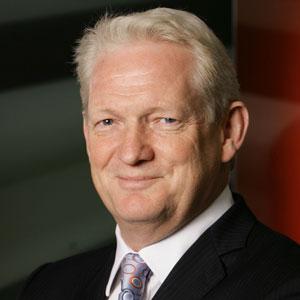 Haythornthwaite – perturbed over “campaigning” journalism, but not about his company’s activities

Haythornthwaite is, among other things, also the Chairman of the UK energy giant Centrica and MasterCard Worldwide.  We asked if he knew of PetroSaudi’s letter claiming that it owns Good Star and if he had authorised the company to make such a claim?

However, it turned out that it was not the irregularities connected to his own company which were causing his concerns, but rather his opinion that Sarawak Report is a “blogger” “rather than an objective journalist with a desire to understand the full facts behind the matter”.

It was Sarawak Report’s activities which he chose to describe as questionable, rather than PetroSaudi’s:

“Therefore, even if I were to be in possession of information relevant to your query, I would be unwilling to assist you in your questionable activities” Mr Haythornthwaite concluded.

We have suggested to Mr Haythornthwaite that rather than attempting to belittle journalists, he should bring whatever relevant information he does possess immediately to the British, Swiss and US authorities, who are investigating the money trail from 1MDB …. before they come to him.

And we offer readers of Sarawak Report Mr Haythornthwaite’s email address, so that they can let him know that this blog is not alone in its concerns over what happened at this company under his watch and that it is to add insult to injury to trivialise and ignore the theft of billions from Malaysia’s development fund.

Read his full email in which Haythornthwaite complains of “fundamental factual errors” by Sarawak Report in that we addressed him with the title of Chairman instead of President:

Having now done some research into your background, it is clear that you are an active campaigning blogger rather than an objective journalist with a desire to understand the true facts behind this matter. That your email to me contains fundamental factual errors – not least suggesting that I am, or have ever been, chairman of PetroSaudi International – reinforces my concerns about your credibility.

Therefore, even if I were to be in possession of information relevant to your query, I would be unwilling to assist you in your questionable activities.

Sent from my iPhone

The new information from Good Star’s incorporation documents raises further questions about the role of another doyenne of the British establishment, the private bank RBS Coutts in the 1MDB scandal.

It was Coutts, which originally received the US$700 million into its Zurich branch from 1MDB, without apparently establishing proof over the claims of beneficial ownership of Good Star.

It is a basic due diligence requirement than banks should know their customers and ensure that large sums are not being transferred by politically exposed persons in particular, like Jho Low. 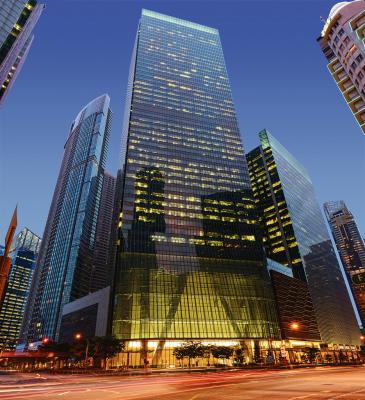 However, the documentation from the Seychelles has now revealed that the information about Jho’s beneficial ownership of Good Star was available to Coutts after all.

Because Coutts was listed as being Good Star’s banker at the time it was incorporated, just weeks before the 1MDB heist in May.

The records in the Seychelles register cite Coutts & Co Limited (Singapore Branch) as the named principle client of Good Star, implying that officials at the bank were involved in setting up the company and must have been aware that Jho Low was the beneficial owner of the company.

There should have been no confusion at the sister branch in Zurich, therefore, about the beneficial owner of Good Star at the time of the transfer, meaning they ought to have realised that Jho Low was a politically connected person in Malaysia at the highest level and also that this account was not related to the 1MDB joint venture as claimed.

Yet again, private banks appear to have worked hand in glove with off-shore havens and the UK based incoporation agency (Offshore Incorporations Limited) to assist the transfers of enormous sums of money of dubious origin linked to Malaysia’s 1MDB scandal.

The unravelling of this cover up has come a long way since the denials by Jho Low and Najib Razak at the start of 2015 that either of them had any direct involvement at all in the fund and its massive transfers of cash.