Just weeks after Sarawak’s Chief Minister Adenan Satem came under pressure from environmental groups for remaining silent about peatland clearing by crony company BLD Plantation in Sibu, he now faces questions why he granted 3,000 hectares of land at a mere fraction of the market value to a Taib-linked company in 2014.

In a statement released by Padungan State Assemblyman, Wong King Wei from the Democratic Action Party (DAP) last week, Adenan was asked to explain why:

With this condition of the land, it is reasonable to estimate that the land at that area is worth at least RM5,000 per acre. Yet the State Government is giving out the land not even at RM300 per acre.

In adding salt to wound, the total premium of RM882,176 payable by the said Genuine Formation Sdn Bhd need not have to be paid. The premium of RM882,176 is not collected by State Government as it is “part of payment in kind” vide Contract No. PWD/HO/B102/2000”. Thus the said Genuine Formation is enjoying double enrichment both in the value of the land and profit in the contract.

Thus, I demand for Chief Minister’s immediate explanation. Has he chosen to go back to the old path of his previous administration? 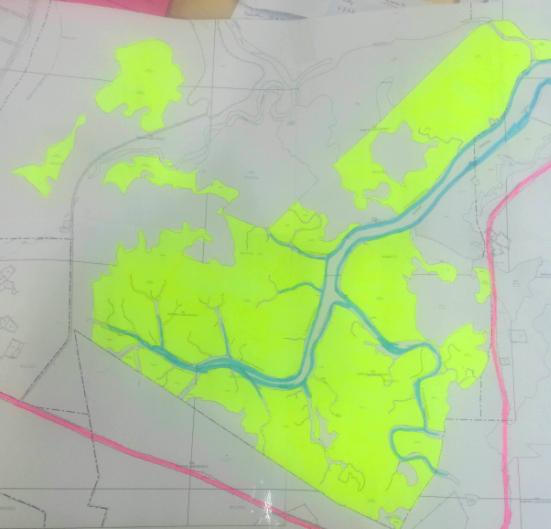 Land (in yellow) alienated to Genuine Formation in Lundu

So who owns Genuine Formation?

Veteran Sarawak watchers have viewed this transaction with weary recognition.  The generous handouts of the Taib era were invariably made to members of his own family or his business and political cronies.

Given that Adenan has vowed to change the way Sarawak has been plundered by its own governors and to return law and order to the planning and forestry departments, all are interested to know who owns the remarkably fortunate Genuine Formation, which has avoided paying the premiums that should have been made into the public purse. 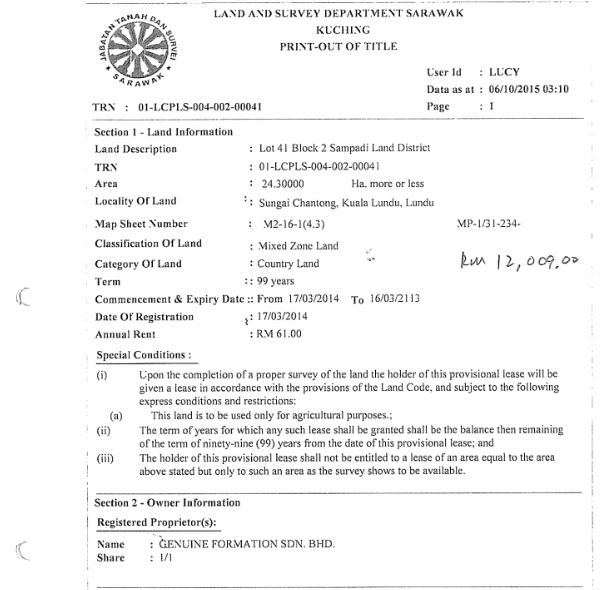 Sadly, it seems nothing has changed in these respects.

Dedicated readers of our blog may well recognise that address as the office of Taib Mahmud’s son Mahmud Abu Bekir and his company Titanium Management. A company that Sarawak Report have previously exposed for being granted lucrative state contracts and even free state land totalling the size of Singapore. 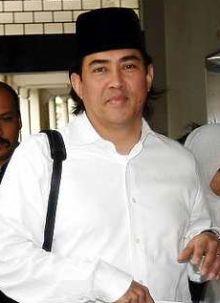 Taib’s son Mahmud Abu Bekir has been granted a further 3,000 ha for “payment in kind”

Scandalously, in each and every case, these lands have been handed to the companies under the category of so-called “Payment in Kind”.

This is a polite way of saying that it has been given to Taib’s son for free and it looks as if the land given to Genuine Formation was no different. 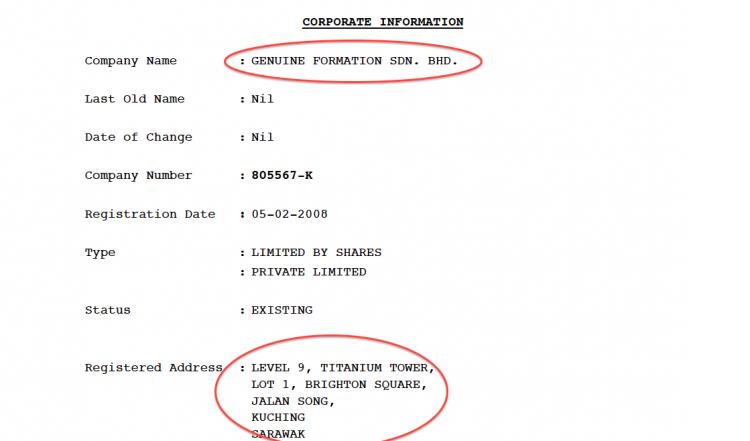 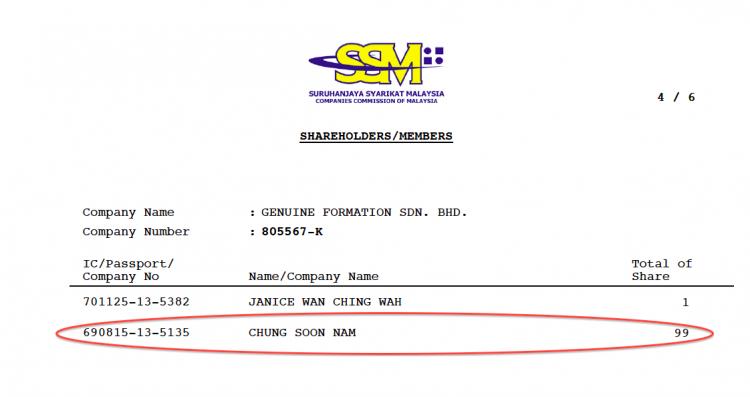 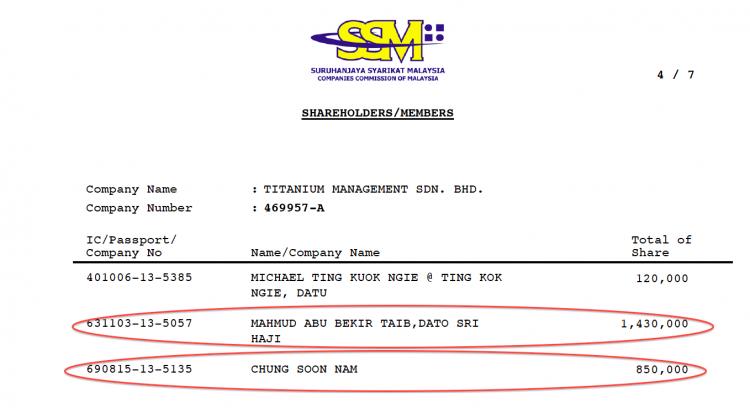 The real beneficiary of the Titanium companies – Mahmud Abu Bekir

Just last week, the Malaysian Anti-Corruption Commission (MACC) criticised such cronyism when it tabled its 2014 report in Parliament.

The report stated that based on investigations conducted, three top administrations in the Sarawak government have manipulated their power in granting land approvals. The report concluded that, absolute power without control could lead to power which could be “manipulated for personal and family gains by the minister.”

It is a sorry state of affairs, given all the promises of reform once Taib was bumped upstairs.

In May, Adenan pronounced in a recorded speech in London that he was planning to restore Sarawak’s forests, curb further oil palm plantation, end corruption and stop gratuitous dam building.

Chung family residence in Kuching – getting rich of political contacts

Nevertheless, by August he was standing firmly behind Malaysia’s scandal engulfed Prime Minister Najib Razak and in September he rebutted  corruption allegations against his notorious predecessor, Taib Mahmud.

Adenan may want the international community to believe that he is tackling the major issues affecting the state, but Radio Free Sarawak have been receiving locals calls, which contradict that narrative on a daily basis.

Broadcasts over the last couple of weeks alone have highlighted cases of violence and arrests of native land defenders, land grabbing and intimidation against opposition supporters. Just this week, opposition politician Nurul Izzah was barred from entering the state, a move which lawyers have condemned.

“Such a policy directly contravenes the freedom of movement guaranteed in Article 9 of the Federal Constitution, where every citizen of Malaysia has the right to move freely throughout the federation.” says Lawyers For Liberty’s Eric Paulsen.

To mark International Human Rights Day on Thursday, 500 representatives from various native rights groups gathered in Kuching to highlight what they see as the major issues affecting the state. These include the need for recognition of indigenous community conserve forest areas (Pulau Galau) and ancestral territories (Pemakai Menoa), making Environmental Impact Assessment (EIA) reports available to all affected communities and to stop land grabbing and the abuse of state immigration powers.

The full list of the land that was granted to Genuine Formation Sdn Bhd can be found below: 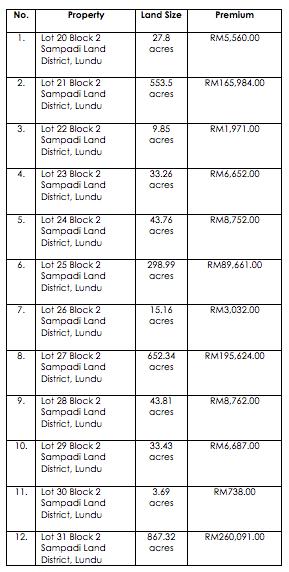 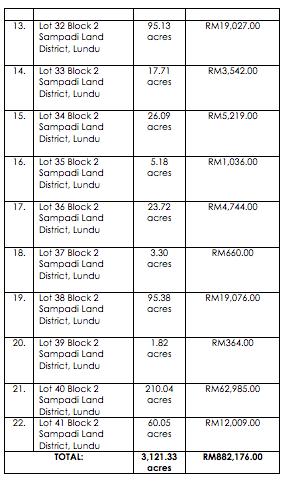