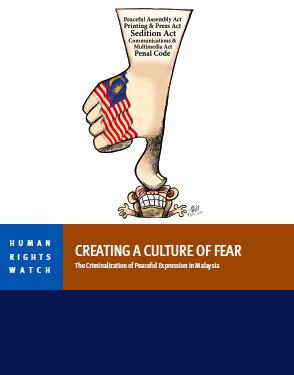 Malaysia’s Prime Minister Najib Razak comes under damning further criticism today with the release in Kuala Lumpur of an in-depth report by the leading US human rights organisation, Human Rights Watch, in advance of the planned visit by President Obama later this month.

The 145 page report accuses the Malaysian Government of creating a “culture of fear” and of “criminalising freedom of expression in Malaysia” and it is based on an in-depth analysis of Malaysia’s draconian laws between 2014-2015, including the Sedition Act, the Printing Presses and Publications Act, the Communications and Multimedia Act, the Peaceful Assembly Act and the Penal Code, all of which have been increasingly used against voices that are critical of the ruling Barisan Nasional government.

Human Rights Watch spotlights the worrying trend of abuse of the legal process, including ‘late night arrests’, ‘unjustifiable remands’ and a ‘pattern of selective prosecution’.

In doing so the NGO joins an army of critics, who are increasingly reporting on the strong-arm tactics used by Malaysia’s Prime Minister to silence dissent.

Sarawak Report itself recently reported how Najib Razak has been swiftly executing legal measures to outlaw and criminalise individuals, who attempt to take up their constitutional duties as a representative of the opposition or to exert their rights as critics of his regime.

“Prime Minister Najib Razak and the Malaysian government have repeatedly broken promises to revise laws that criminalise peaceful expression. Instead, Malaysia has gone on a binge of prosecutions of critics. The government is making a mockery of its claims to democracy and fundamental rights by treating criticism as a crime.

After the ruling coalition lost the popular vote in the 2013 elections, a crackdown on its critics began. That repression has intensified in the past year in the face of critical media coverage and rising public discontent over issues ranging from the imposition of a new Goods and Services Tax, to the government’s response to a spiralling corruption scandal involving the government-owned 1 Malaysia Development Berhad (1MDB), whose board of advisors is chaired by Prime Minister Najib.

Rather than engage in debate on the merits of these issues, the government has responded by arresting and often prosecuting those with critical views, including opposition politicians, activists, journalists, and ordinary citizens, suspending two critical newspapers for three months, blocking websites, and declaring peaceful protests “unlawful.

Malaysia should stop shutting down media and shutting up critics. These actions are increasingly noticed by the international community, and send the signal that the rule of law is under threat.”

Sarawak Report has been blocked in Malaysia under the Communications and Multimedia Act.

Sarawak Report have also recently found ourselves at the brunt of these newly enacted or amended laws, as Human Rights Watch points out. 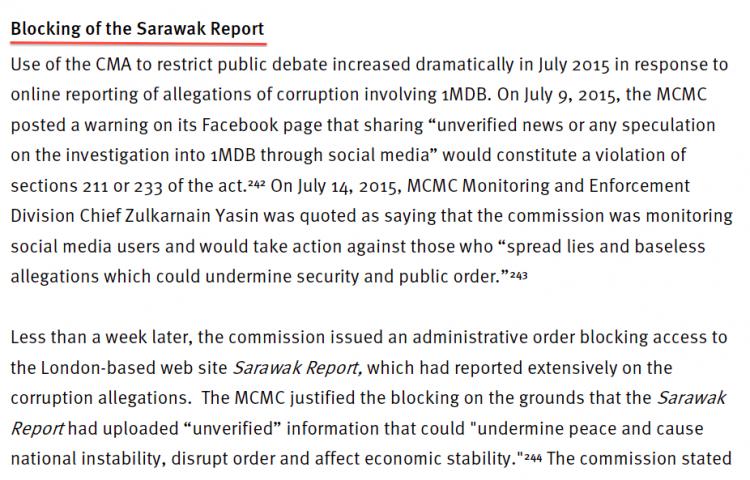 Amongst other cases, Human Rights Watch highlight the use of arbitrary laws against Sarawak Report

This blog has been blocked in Malaysia under the Communications and Multimedia Act because of our investigations into the 1MDB scandal, on the grounds that our articles, have been deemed “indecent, obscene, false, menacing, or offensive in character with intent to annoy, abuse, threaten or harass.”

The Editor has also found herself investigated under the Penal Code for “activities detrimental to parliamentary democracy” and a warrant of arrest has been issued against her, along with requests for her to placed on Interpol’s Red Notice List.

Requests that were swiftly rejected by Interpol.

Amongst several examples of Malaysia’s arbitrary laws being used against opposition politicians, human rights defenders, journalists, lawyers and even ordinary citizens, therefore, the report hones in on the blocking of Sarawak Report and calls on the Malaysian Government and the Malaysian Multimedia and Communications Commission to unblock our website and to cease investigations against us.

Human Rights Watch send a clear message to the MCMC!

Although the Communications and Multimedia Act specifically states that “nothing in this act shall be construed as permitting censorship of the Internet,” the government has used that law to block access to the website Sarawak Report and its reporting on possible corruption involving 1 Malaysia Development Berhad, to prosecute individuals for “offensive” comments on social media, and to investigate online news portal The Malaysian Insider for its reporting on a matter of public interest. Does the government now take the position that it can and should censor the Internet? 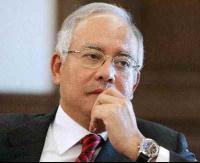 Najib Razak has been accused of creating a culture of fear since the ruling party lost the popular vote in the 13th General Election.

This question along with a host of others were sent to the Minister of Home Affairs, the Attorney General, the Inspector General of Police and the Multimedia and Communications Ministry well in advance of the report being published. Unsurprisingly, Human Rights Watch received no response.

The report will make it difficult for world leaders to ignore the human rights abuses taking place under Najib Razak, many of who will be landing in Kuala Lumpur next month for the 27th ASEAN Summit.

The full report “Creating A Culture Of Fear: The Criminalisation Of Peaceful Expression in Malaysia” can be read [HERE]