Round The World With Najib & Rosmah! 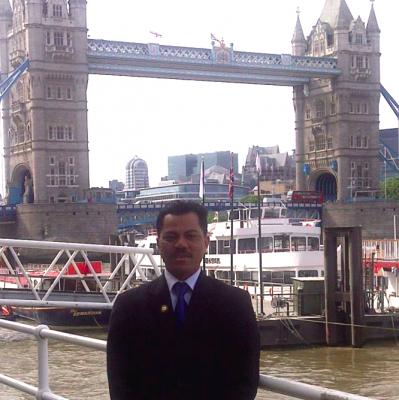 Facebook picture of Roslan Sohari – his site claimed he worked as Manager in the PM’s Office, until it was hastily removed following our story

Roslan Sohari, was the man cited in documents  revealed by Sarawak Report yesterday, relating to the investigation into 1MDB.

Investigators identified him as having made cash deposits into the Affin Bank account of Rosmah Mansor earlier this year totalling RM2 million.

But, when journalists (from Malaysiakini) called on the handphone number recorded by the bank he denied he knew anything about the matter.

He also denied he worked for the Prime Minister and his wife.

Yet, our research shows that Roslan Sohari’s own data on social media tells a very different story and it links him inextricably to the Prime Minister himself and the bank account details below. 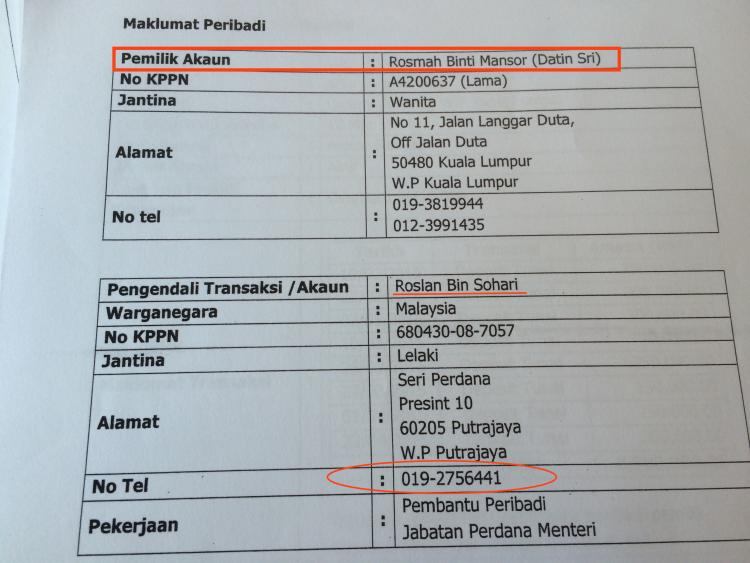 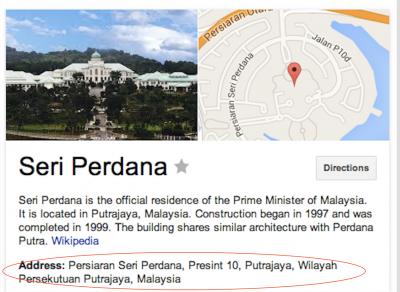 Roslan Sohari on Facebook matches his profile on Whatsapp

However, earlier research saved some detailed online evidence, which shows that the phone number and name on the Affin Bank account do indeed match the details of this “personal assistant to the Prime Minister”. 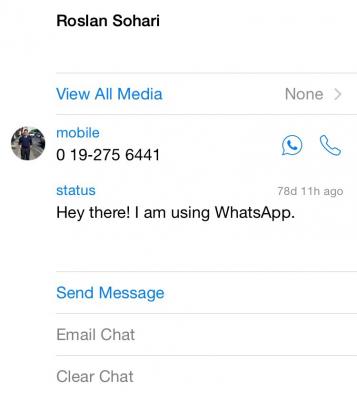 Roslan Sohari uploaded a picture of himself onto his Whatsapp profile

The 019 hand-phone number registered by the bank refers to Roslan Bin Sohari, as the person who deposited the cash transactions.

And when we plugged the number into Whatsapp it came up with a clear profile for none other than a chap called Roslan Sohari.

He even uploaded a picture (left inset) of himself standing in front of the Arc de Triomphe in Paris.

If you click to inflate that picture (see below) the features of this Roslan Sohari are very clear.

Cross-checked with Facebook, it is clear that this picture, which is related to the phone number held by the bank, perfectly matches the many pictures that a certain identical Roslan Sohari had put up of himself on his Facebook page. 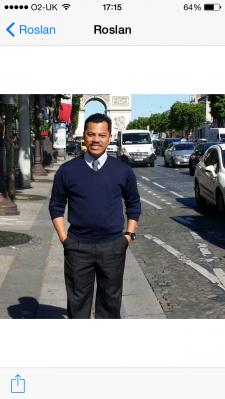 This chap on Facebook (before the site was hastily pulled down this afternoon) advertised himself as none other than the Resident Manager of the Prime Minister’s Office – just as described in the bank documents.

In short, the number given by the bank as belonging to Roslan Sohari tallies with Whatsapp’s phone directory and profile picture for a person of that name.

And that picture identically matches the man who had a Facebook account under Roslan Sohari, who claimed to work for the Prime Minister!

However, our own researcher and enterprising Sarawak Report readers had already copied much of the material from the site. 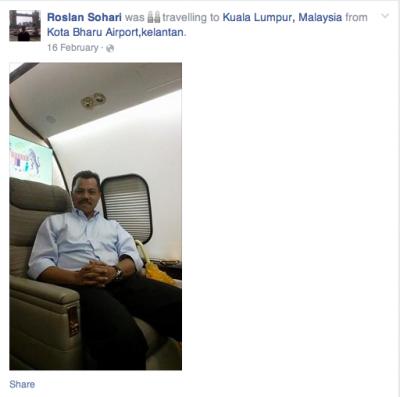 Travelling the world in style on private jets

What the many, many pictures uploaded by this Roslan Sohari onto his Facebook site show is that this Malaysian has lived a life of travel luxury over the past year, hopping around the world’s capitals and staying at only the very best of hotels.

Intriguingly, all his snapshots from different parts of the world on different dates perfectly match the official travel arrangements for the man who was cited as his boss on the Facebook site before it was removed.

That is, the Prime Minister Najib Razak.

Wherever Roslan has been, so has the Prime Minister of Malaysia, usually accompanied by his wife, Rosmah Mansor.  On occasion, it has been only the PM’s wife whom Roslan appears to have been detailed to accompany. 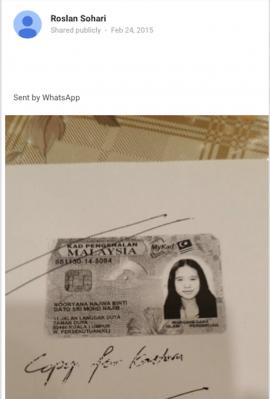 Shared publicly – a photo of the ID card of Nooryana

There is another extraordinary social media link available, which ties Roslan Sohari to Najib Razak and his family.

On Roslan’s own Google+ account, he had uploaded a Whatsapp picture of the ID card of the couple’s now famous daughter Nooryana, who has just astonished the world with the sheer lavishness and expense of her marriage celebrations.

Did Roslan not realise that he had uploaded this picture onto a public site?

Was he sending the information to a third party to help expedite one of the many travel commitments detailed on his Facebook?

If so, this further online information confirms the link between Roslan and Malaysia’s “First Family” in a way that make his denials appear very hard to credit.

So, let’s take a look at Roslan’s round the world trips, as detailed by his own Facebook over the past years and months, before we reach any final conclusions: 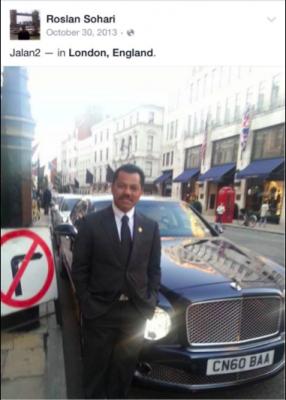 Roslan proudly photographed himself in London in October 2013.

At the very same time, Najib Razak and Rosmah Mansor were in London for the 9th World Islamic Economic Forum (WIEF). 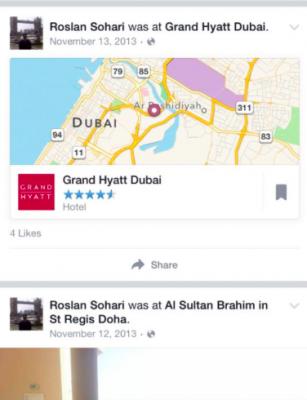 Posting updates from swanky hotels in Dubai in November 2013

Rosmah Mansor took a controversial trip via the VIP jet to Dubai on the same date. On 13/11/2013 she was granted an audience by the UAE Prime Minister’s wife Princess Haya Bint Al Hussein. 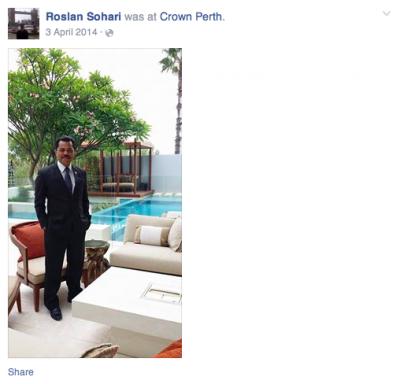 Roslan Johari uploads a photo of himself on 3rd April 2014 at the lavish Crown Hotel in Perth, Australia 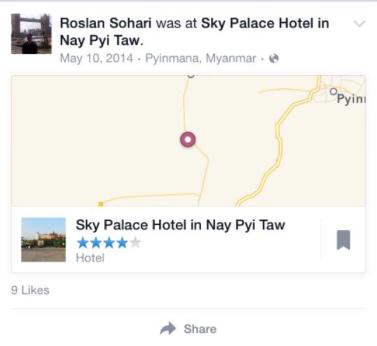 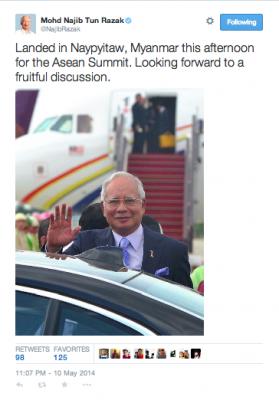 Najib and Rosmah arrived in Nay Pyi Taw on the very same day to attend the 24th ASEAN Summit in Myanmar. 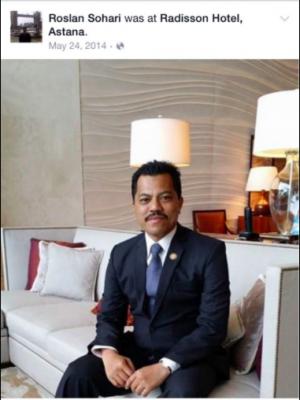 Roslan at the Radisson Almaty, Kazakhstan 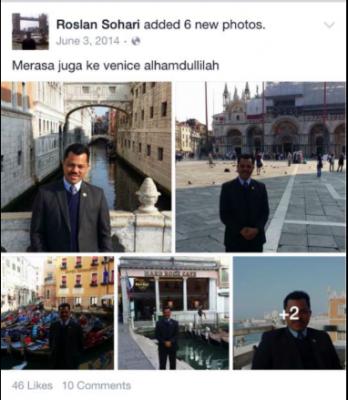 Roslan uploads pictures of himself in Venice, Italy.

Rosmah Mansor was in Venice on the same day to meet with Malaysian solo runner Suwaibah Muhammad Nasir during her Silk Route Run-Across Reverse of Marco Polo (AROMA). 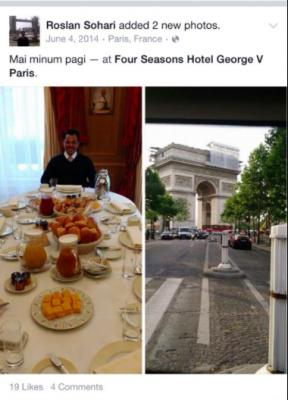 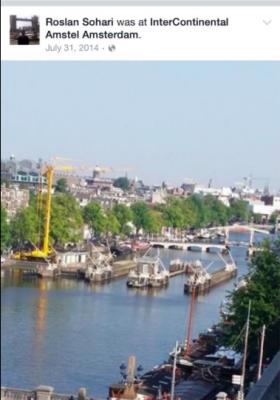 Roslan takes a photo from the luxurious Intercontinental Hotel in Amsterdam 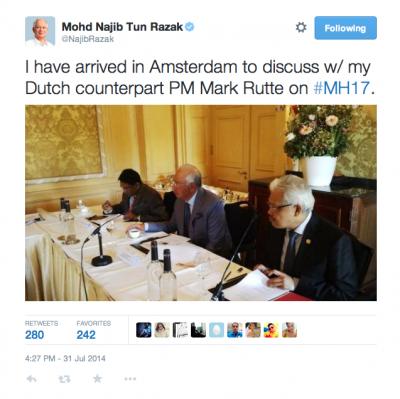 Najib sends out a tweet on the same day.

On the very same day (31/07/2014), Najib was in Amsterdam for a press conference with Prime Minister of Netherlands, Mark Rutte, regarding missing Malaysia Airlines flight MH17. 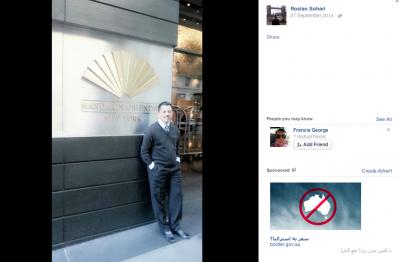 Roslan stands outside the 5* Mandarin Oriental in New York

During the same week that Roslan was snapped in New York, Najib and Rosmah were on a working visit to New York and San Francisco. Najib was also spotted at the same hotel (The Mandarin Oriental) just two days later. 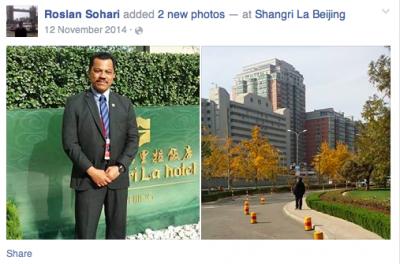 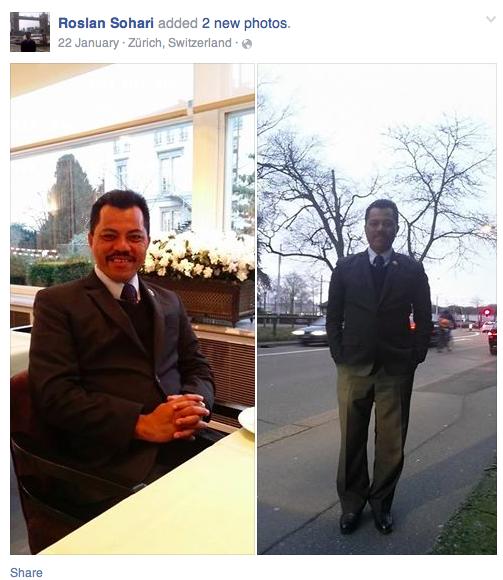 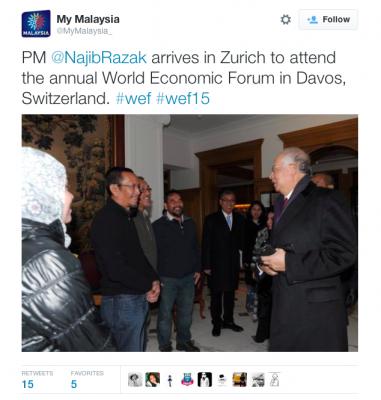 Announced on Twitter that Najib was also in Zurich on the same day.

On the very same day (22/01/2015), Najib and Rosmah both arrived in Zurich, Switzerland for the World Economic Forum (WEF). 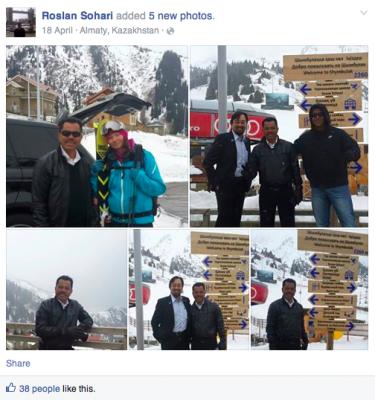 Roslan in Almaty on the same day as Najib’s daughter’s wedding. Was that a coincidence?

Rosmah and Najib’s daughter Nooryana Najwa got married to Kazakhstani Daniar Kesikbayev in Almaty, Kazakhstan on the same day that Roslan was photographed in the same city. 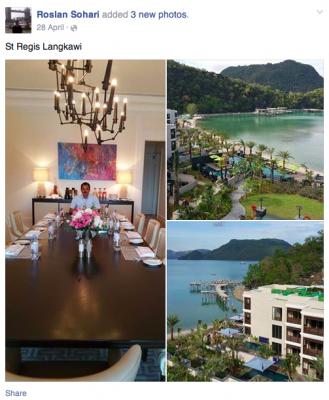 Roslan uploads pictures of himself at the swanky St Regis hotel in Langkawi in April 2015.

A day later (29/04/2015), Prime Minister Najib was attending the 26th ASEAN Summit in Langkawi. There was also an ASEAN preview event where dignitaries were welcomed by Najib Razak, the event was held at the boutique St Regis Hotel, where Roslan was also snapped. 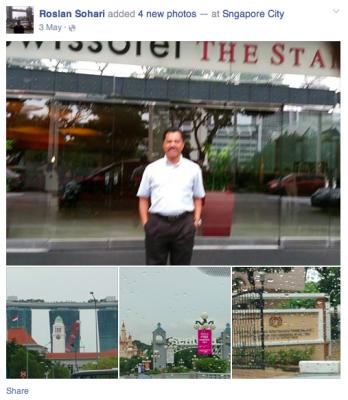 Photographed in Singapore on 3rd May 2015 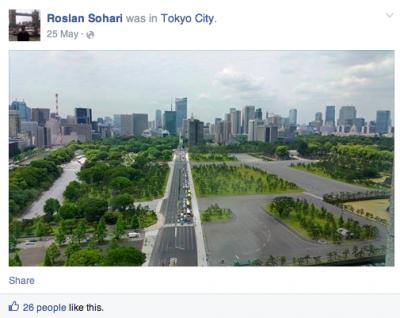 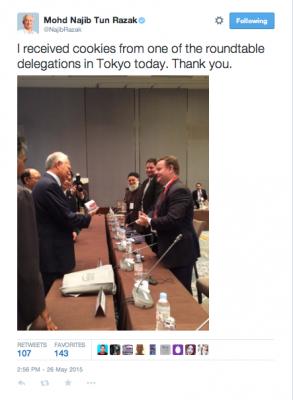 Tweeting from Tokyo at the same time

Just a day earlier than Roslan uploaded his photo (24/05/2015), Prime Minister Najib had arrived in Tokyo for his official visit in Japan. The visit was intended to strengthen bilateral ties between the two countries. 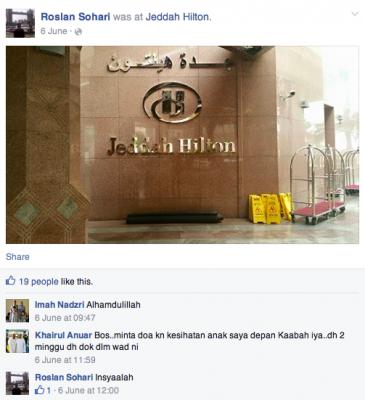 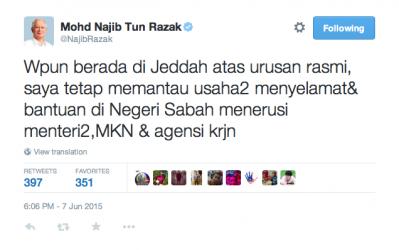 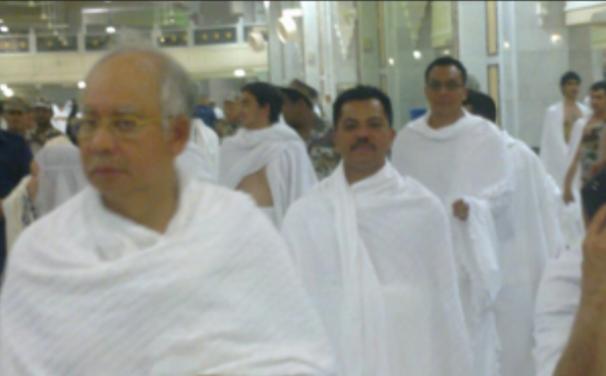 Me and my boss pilgrims together and fellow world travellers

So, do people believe that Roslan Sohari knows nothing of Najib and Rosmah and rightfully denies the evidence that he deposited two million ringgit of cash in Rosmah’s account earlier this year?

Or do we think he just panicked and lied?

Meanwhile, readers of SR have been kindly taking over Roslan’s role in feeding this Affin Bank account belonging to Rosmah.  Although the various transactions today have been electronic (as opposed to bags of cash) – and considerably less generous. 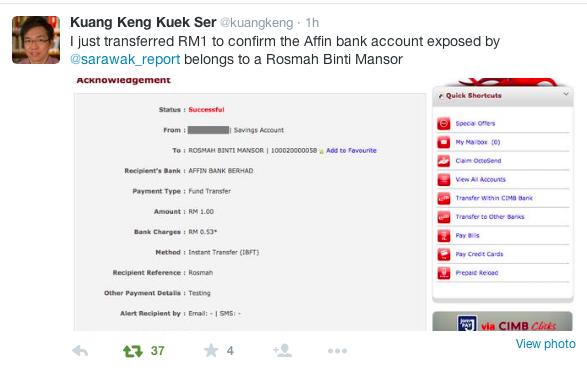 The bank accepted the transfers made to this account, proving that the details cited correctly tally with the records of the bank!

A number of RM2 ringgit and RM1 ringgit payments have been successfully paid into the account owned by Rosmah Mansor, using the details provided by our research.

The bank accepted the payments, thereby proving that the details provided tally with the records held by the bank.

The above transaction increased Rosmah Manor’s deposit in the bank from RM2 million by a further two ringgit!