My Father Died For Reporting Corruption At AmBank EXCLUSIVE INTERVIEW 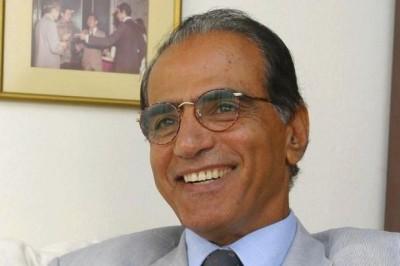 After days of speculation, the son of the AmBank founder Hussain Ahmad Najadi has openly confirmed that he believes his father was assassinated because of his open concerns about corruption at the bank he had once managed.

Najadi was brutally gunned down in a KL car park on 29th July 2013, allegedly the day after he had filed a police report on the matter.

Pascal Najadi, who currently resides in Moscow, spoke directly to Sarawak Report this evening to confirm his own conviction that this was the motive for the murder.

“I am willing to go on the record. Nothing else makes sense” Najadi said tonight. “This was an execution, not a killing. The story about the temple doesn’t add up. He was nothing to do with the Temple. Why would you kill someone over some row about that?” added Najadi, referring to a supposed planning dispute that was floated at the time as being the reason for his father’s death.

My Dad talked about this the last time I met him

Najadi says he fled Malaysia for the last time on March 8th 2014, which was the day also of the disappearance of the Jet MH 370. He no longer regards himself or his family to be safe.

He told Sarawak Report that on the occasion he last saw his father it was four days before he died and that Hussain had talked then about the issue which was troubling him:

“I left for Moscow, around the 25th of July 2013 to attend to my business. The day before we had a family lunch at the Restaurant Ciao, at the Selangor Golf Club, right in the middle of KL. My Dad then spoke about massive corruption. He also said that they [people in power] had lost the plot in the sense that they recklessly and behind their own population’s backs raked in billions of ringgit from construction, oil & gas to defence & transportation. He made a point that its insane that they do not for one second think about the future generations, simply not.

“My dad was an upright man, never corrupt. He, my Mum and I are the same. If we spot criminal activity we likely will report this immediately to the right and appropriate top down channels.”

However, Pascal Najadi says that he was never notified if his father made a police report.  He believes that it would have been more likely that he would have reported his concerns to top officials:

” That was not his style, because he knew it is a shot in the dark in Malaysia to log a Police report… I believe that he would have gone to senior regulators direct to report findings that he found out involving massive amounts being looted”.

Najadi also says his father had recently spoken about how he had refused an offer to get involved in corrupt practices put to him by representatives from UMNO:

“He told me with pride that he sent some government linked guys to fly their kite.  They offered my Dad to flip (as a go between) a very large piece of KLCC land.

My Dad at this lunch said that he told them off and said that he would never do such a corrupt flip flop etc.

He was very outspoken you know. That perhaps was his biggest enemy, to talk truth…always

Pascal Najadi says that his suspicions of a cover-up have been strengthened because of the total failure of the Malaysian police to pursue the perpetrators of the attack or to properly investigate what happened. 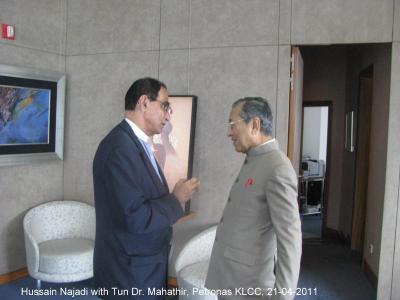 Hussain Najadi with Tun Dr. Mahathir Mohammad – the banker had worked with the circles governing Malaysia for decades

Particularly insulting was the failure to inform the family or even to question him about what evidence he might have about his father’s affairs.

He received just one call from a junior police officer about the death, who barely spoke English.

After that his family received no further communication, he says.

The murderer in the case was eventually arrested and named the man who had hired him for RM20,000 to carry out the shooting.  However, Najadi says there is no evidence the Malaysian Police made any effort to arrest the man, who was traced in Australia and who is believed to be connected with people high up in government.

“The Malaysians never pursued him and it’s been dropped. I have no explanation for his execution except corruption at the bank and the mastermind was let go and escaped via Sydney. Malaysia have not followed up via Interpol. He was Malaysian, he boarded a flight to Sydney even though he was an immediate suspect. The Australians followed this mastermind to Shanghai, but Malaysia never pursued him”

The international markets will in the end punish UMNO

Najadi told Sarawak Report that such a realisation would be fatal to a regime that relies on borrowing and the trust of financial markets:

“The Global markets are starting to judge Malaysia – as a failed state”, he claimed.

“Najib and UMNO must be clear of the consequences every day that is slipping past without any prosecution in Malaysia.  The Global Markets are the ones that will day in day out now punish Malaysia for simply being not serious as a government. Period.
“The ringgit has started to dive and Fitch, no surprise, again got it wrong, since they are a lagging indicator. Where is security and where is justice? They are not independent.  Markets all have one thing in common, they do not forgive and if fooled strike with a vengeance. Bank Negara does not have reserves to throw at the plunging ringgit” the banker’s son concluded.

He was referring to the news that billions of dollars worth of Malaysian bonds are now being shed by investors concerned by the loss of confidence in Najib Razak.
Where the authorities have not attempted to bring justice he believes it will be found another way. 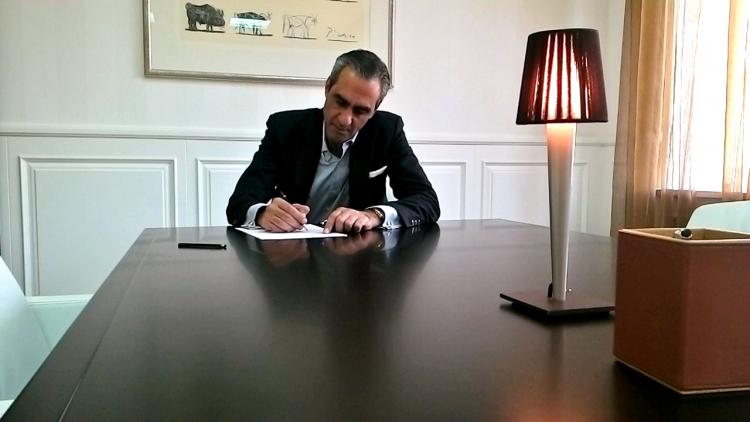