No Difference! - We Prove How The Allegations Of "Tampering" Are Lies 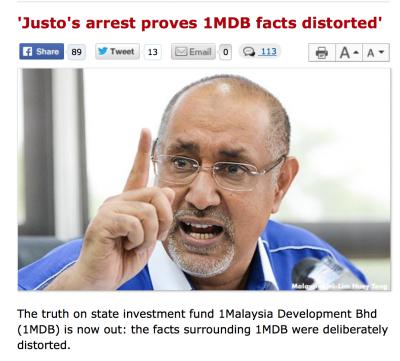 What proof have such eager accusers been able to find?

Sarawak Report has closely researched the extremely serious and libellous allegations, which claim documents relating to our coverage the PetroSaudi 1MDB joint venture were “tampered” and “distorted” in order to “creatively alter” the truth.

We can now prove that these allegations are demonstrably untrue, by examining the evidence on which they were based.

So, our message to those who have accused us is check your facts before you sound off your accusations and start to worry about libel suits, if you have defamed us or an innocent man who is now in jail.

We can confirm that there is zero evidence brought forward so far to substantiate the claims of “distortion” made over the past 48 hours by the New Straits Times and taken up by certain media, bloggers and UMNO politicians.

Indeed, the little evidence that has been provided by these parties can be shown to confirm the exact opposite, which is that there has been no tampering of documents.

Even so, people who could also have made the very same checks have falsely alleged that Sarawak Report and the Edge newspaper lied and deliberately misled readers with “distorted” information about 1MDB’s missing billions.

Most notoriously the Home Minister Zahid Hamidi has claimed to the press that this allegation proved that our reports were “intentionally spinning” and that facts had been “twisted”. As a result he threatened to “charge the perpetrators.”:

“We believe that (the perpetrators) must be fully responsible for any action (that will be taken) resulting from the false reporting or intentional spinning (of facts),” he said.

Yet we can show in precise detail how these comments can be proved to be entirely untrue.

Behind the allegations is PetroSaudi, which is an involved party with a strong interest in discrediting our information

Our proof has been obtained by examining the evidence on which the company PetroSaudi, which is behind the allegations, based its claims.

PetroSaudi is itself under investigation for its role as a partner in the joint venture with 1MDB, from which billions are now scandalously missing.

This biased party was clearly a driving force at the centre of a highly orchestrated attempt this week to discredit some of the evidence that has been used to expose wrong doings by the joint venture in our reports.

Thus is was that on Tuesday staff from the UMNO owned newspaper New Straits Times were transported to Bangkok, in order to photograph the staged arrest of an alleged PetroSaudi whistleblower, whom they claimed was the source of millions of emails that have provided Sarawak Report information about siphoning of billions of ringgit from 1MDB. 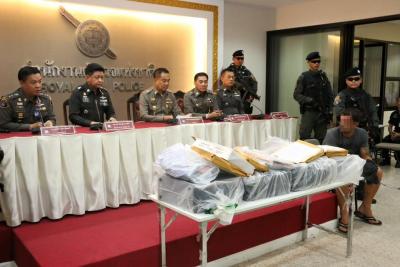 Showcase arrest – but what does the evidence add up to?

This was a former Director of the company, whom PSI falsely labelled as an “IT expert”.

Indeed, it was PSI who had lodged the series of denunciations to the Thai police, which formed the basis of the charges that led to his arrest and detention. PetroSaudi have accused their former colleague of taking their data and “distorting” it, supposedly in order to “extort” and “blackmail” the company – a crime PSI has claimed took place in Thailand.

So, it was hardly in the capacity of a neutral party that PetroSaudi offered the NST an interview with their ‘expert’ interviewee for the story.

This turned out to be an unnamed employee of the UK based “cyber intelligence” firm, Protection Group International, who had allegedly examined the documents uploaded onto the web by Sarawak Report.

Ready for hire – but did PGI really make the claims quoted?

It was a series of astonishing “quotes” from this anonymous spokesman from PGI, which provided the bedrock for all the subsequent allegations in the Malaysian media, designed to discredit the evidence in Sarawak Report.

“”Our investigation is still ongoing, but it is clear that we are looking at a case of large-scale data theft, and our analysis substantiates that Justo is the source of the data published on Sarawak Report. “For example, when we looked into a PowerPoint file that was on one of the Sarawak Report’s blogs, we found evidence in the metadata of that file that it had been handled by a certain “xavierj” in 2013; two years after Justo left PetroSaudi, and four years after the file had originally been created by a law firm that advised PetroSaudi. “It is also clear that the stolen data sets are incomplete, and underwent an editing process after they were removed from PetroSaudi’s systems, and before they were published on the Internet. There are many inconsistencies between the published data and the data which still exists on files within PetroSaudi relating to that period of time. Simply put, it is incomplete data, creatively selected and edited to fit a desired narrative. “These cases are all too familiar and we have unfortunately dealt with so many of them; where a greedy or malicious employee removes confidential data and threatens to publish it, or has it published, for personal gain – financial or otherwise. Published data then invariably goes through selective editing, and not infrequently plain forgery, in an attempt to up the ante and create the most damaging story possible. “This case is an almost textbook match to that profile. PetroSaudi, like many companies, individuals or even governments that we have seen before them, and no doubt will continue to see after them, will suffer unfair scrutiny caused by a misinformed online onslaught. In this case, what started out as a simple story of personal gain by a former employee, became a story of politically-motivated allegations through the use of irresponsible online blogs.
[News Straits Times]

Put short, the blatant allegation by the unnamed PGI spokesman is that they have proved that a power point document downloaded from our site was a tampered version of the original, altered with the deliberate intention of distorting the truth.

Why did New Straits Times not publish the evidence?

This all begs the question as to why the NST has never bothered to substantiate such a grave and libellous charge by showing their readers the actual evidence?

As Sarawak Report pointed out yesterday, we corroborate our claims, so why can’t they?

The reason turns out to be that it is startlingly easy to show that the claim is completely untrue.

The one item of evidence identified by our accusers was a power point presentation made available on our site where the so-called ‘metadata’ indicates it was opened and then “saved” by Justo in 2013.

We have identified that document as the joint venture structure power point presentation uploaded into our first expose on 1MDB. 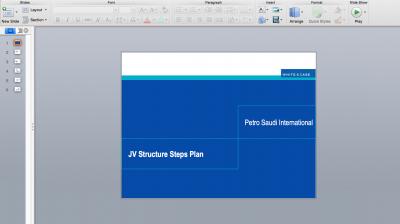 This power point was created for PetroSaudi by the legal firm White & Case.

The six slide presentation sets out a “joint structure plan” which allows for the repayment by 1MDB (using Malaysian public funds) of a manufactured “loan” allegedly owed to PetrSaudi’s own parent company.

A simple examination of the so-called “meta data” identifying this document from our original report does indeed show that it was opened by Xavier Justo (‘xavierj’) on January 17th 2013. 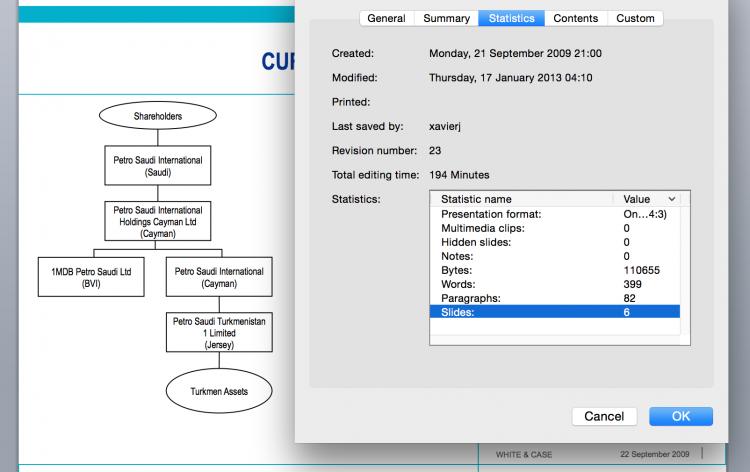 However, there is no evidence whatsoever to substantiate the claim that Justo tampered with or changed the original documents – merely that he opened and copied them.

This is what the slide of the current structure looks like on our site. 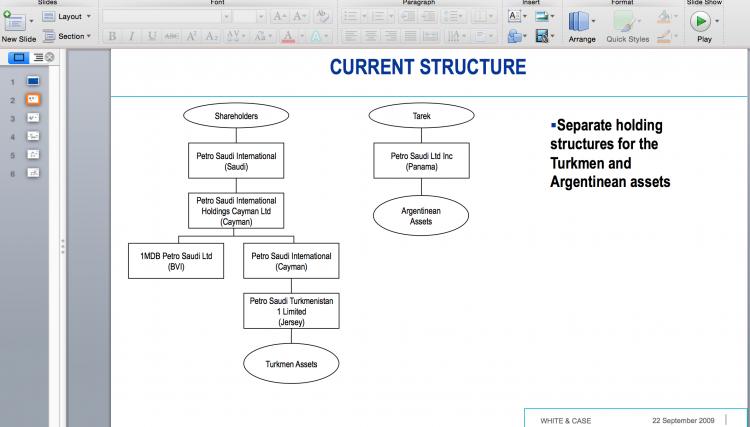 So, how can we show there was no tampering?  We can do this, because like PetroSaudi themselves we too have all the versions of this document from our copy of their own server material. 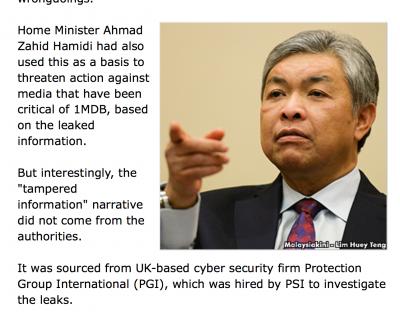 There are in fact a number of versions of the power point amongst the millions of documents obtained from PetroSaudi by Sarawak Report.  This includes the original document circulated by the company, which bears virtually no difference at all to the one we published, which PSI must perfectly well know.

In fact, the exact history of the document (and the meta data) shows that only one minor modification was ever made to this power point presentation.

This change merely added the name of a Jersey company which was incorporated a few hours after they created the power point on September 21st 2009.

White & Case circulated the update with an explanatory email and this updated version of 22nd September 2009 is identical to the one uploaded onto Sarawak Report, which PGI allegedly claimed had been changed and distorted.

History of the power point

So, let’s examine the evidence visually through the three stages in the history of the power point, so that everyone can quite clearly evaluate the merit of PetroSaudi’s serious allegations of tampering and our denials.

The original version of the power point was circulated on 21st September 2009 and can be accessed on this link:

The meta data which can be accessed from this computer file shows that it was created by WC Users (White & Case) on 21st September and modified the next day: 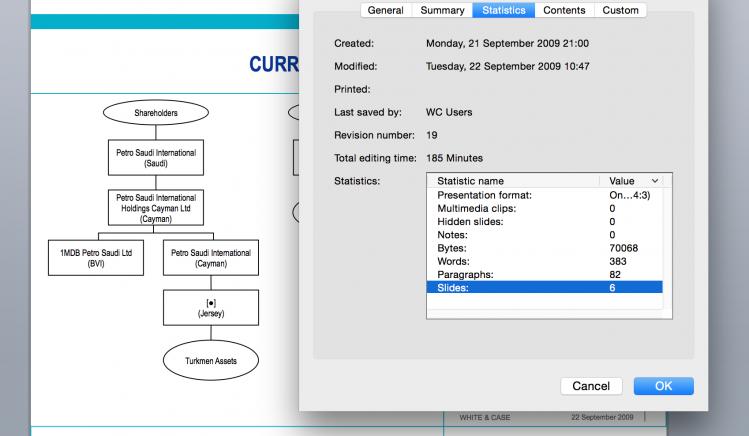 It can be seen that the slides in this original power point dated 21st September do not yet contain the name of the planned Jersey Company belonging to PetroSaudi. 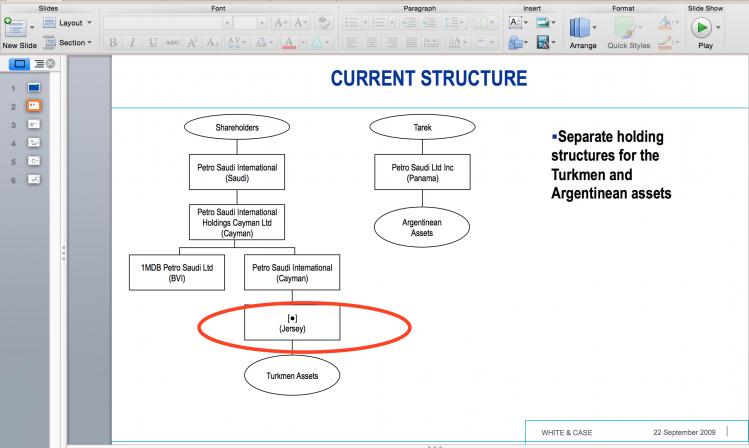 It was the very next day that White & Case sent round its modified version with the name of the Jersey company added.

The modified power point attached to this email includes the advertised addition of the name of the Jersey company:

Likewise, the meta data on this document shows that this modification was created by White & Case on 22nd Sept 2009: 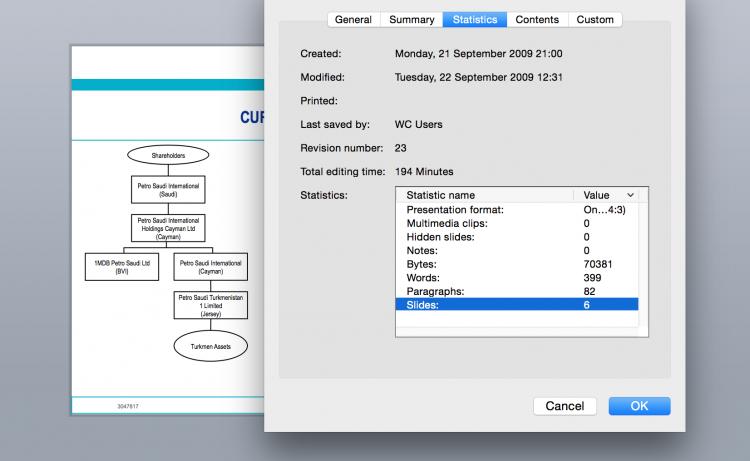 Sarawak Report now refers readers back to the final version (above) of the power point which was uploaded into our report.  This version of the power point did indeed contain the meta data showing that it had been ‘saved’ by ‘xavier’ in 2013.

But the power point itself has been completely unchanged.

Indeed, we challenge readers to go through the six slides minutely and compare them with the six slides of the White & Case (‘WC users) modified version of September 22nd.

Here again is that final power point which we originally published:

And here again is the modified one of 22nd September, which had been updated by White & Case themselves:

Can any of our readers spot any difference whatsoever between these two versions of the same power point?

Since there is no tampering or changes to be found we confirm that the allegations which have been put about by PetroSaudi and published unquestioningly by New Straits Times, plainly without checking the evidence, are completely untrue.

All the evidence that we have is also plainly available to PetroSaudi. Therefore, we can add that they deliberately and maliciously lied when they claimed their former employee had tampered and altered the document.

In which case the “experts” hired from PGI were either misquoted or they have too libellously exaggerated the significance of their findings to suit the requirements of PetroSaudi, who had hired PGI to undermine the evidence of their involvement in a multi-billion ringgit fraud.

Indeed, The Sunday Times have also published an article based on these documents, putting details in some of the documents to Jho Low, 1MDB and PetroSaudi.

Sarawak Report will be demanding satisfaction over these false allegations of “tampering”.

We suggest these misrepresentations are added to the list of potentially criminal activities by PetroSaudi, whose false charges on this point currently number amongst the allegations that have landed a former colleague, a Swiss national, in a jail in Bangkok.