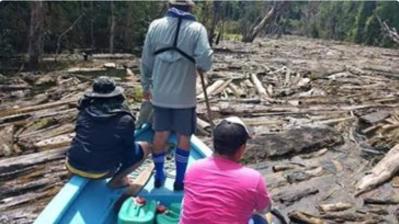 In Malaysia too much deference to so-called VVIPs has allowed too much power to drift into the hands of a tiny number of people.

Such types inevitably start to believe they can get away with just about anything and indeed they do – until their deeds unravel.

Leading UMNO are a generation who inherited this accumulated power and they have started to act as if they personally own the state. 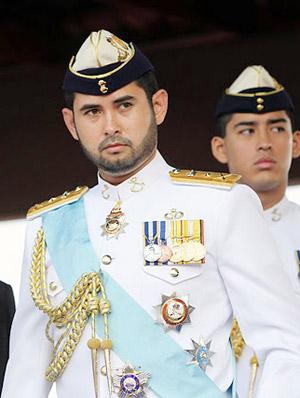 Most troubling is the growing evidence that Malaysia’s bigwigs consider themselves entitled to raid all manner of public funds, built from the savings of working folk, as if these were theirs for the taking.

This is a serious abuse of trust and the undertaking by those in authority to protect such funds.

Pension funds, religious funds and supposedly independent cooperative trusts have all now become subject to the excessive influence of the politicians in charge of UMNO, who treat them like political piggybanks, according to a growing body of information.

Look at the example of the company SRC International, started under 1MDB, which is completely controlled by Najib Razak.

To avoid proper auditing, this company was subsequently moved under the Finance Ministry, which also is completely controlled by Najib Razak.

SRC managed to secure a huge RM4 billion loan from the pension fund KWAP in 2011. Yet, despite persistent attempts by the opposition, it has so far given no public accountability whatsoever as to how this money has been spent.

Meanwhile, both KWAP and the pilgrimage fund Tabung Haji have also been arm-twisted to help bail out 1MDB’s growing financial difficulties by buying up its land bank at inflated prices. Other public investment bodies, such as EXIM bank, have likewise been dragged in to provide lending. 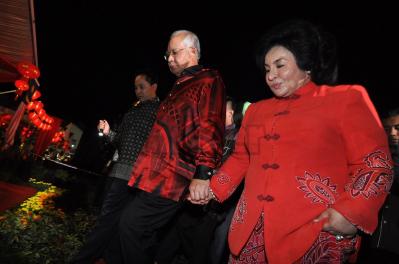 Power over everything, but accountable for very little – Najib and wife Rosmah

The reason that 1MDB is so short of money, of course, is that it has poured borrowed billions into its own projects, for which again it has provided zero accountability.

Behind all these manoeuvres is just one man, Najib Razak, who appears to be beholden to nobody, yet in charge of just about everything.

New emails unearthed by Sarawak Report from the London law firm White & Case, who managed 1MDB’s negotiations with the firm PetroSaudi, show just how central Najib Razak is to the management of the beleaguered fund.

These emails fly in the face of attempts by Najib to claim he was barely involved when the original scandal over the missing billions first broke.

Detail of the vast pearl on Rosmah’s finger. Is it false?

White & Case cite Najib as the sole signatory responsible for the deal on the part of 1MDB, in his capacity as “sole shareholder” of the fund.  In an email seen by the Sarawak Report, questions were put by 1MDB to White & Case, acting for PetroSaudi, including:

Can you please confirm that Loan Repayment Demand letter is issued by PetroSaudi Holdings (Cayman) Ltd, and not PetroSaudi International Limited.”

To which PetroSaudi’s team responded that the 700m would be going to an account in the name of PetroSaudi International Limited.

“Ahead of tomorrow’s funding and completion, please refer to the below points and the attached files.

(b) Account details for payment of 700,000,000 USD to an account in the name of PetroSaudi International Limited (Saudi)

The emails in this trail also damningly illustrate how on the day AFTER the PetroSaudi joint venture deal was signed, on 29th September, key parties were still confused as to who was supposed to owe whom the $700 million ‘loan’ allegedly being settled by 1MDB.

They further reveal (see highlights in red) that 1MDB and Petrosaudi were presenting a bank account, which belonged to the Jho Low controlled company Good Star, as belonging to “PetroSaudi International Limited (Saudi)”, which was a simple lie.

The outcome was that $700 million of borrowed public money was signed off by Najib to a different company to the one it was supposed to have benefitted.

Much of that borrowed public money has subsequently been traced straight into Jho Low’s personal accounts at BSI bank in Singapore.

All on the say so of the man in charge of every step of the operation, Prime Minister Najib Razak – Jho Low’s close patron.

This excess of concentration of power was also highlighted by the Wall Street Journal last week, in an article which detailed how ludicrous overpayments for power plants by 1MDB, (sanctioned again by Najib as the sole decision maker for the fund) translated into huge “donations” by Genting, which had made billions more than it should have, to ‘charities’ of which Najib was Chairman.

These ‘charities’ promptly engaged in electioneering, using the money in attempts to boost Najib’s party UMNO in key battleground states like Penang.

It is now being noted that a related charity is currently being employed in Sarawak to distribute similar largesse in battleground areas in the run up to the impending state election.

So, an increasing body of evidence indicates that Najib feels entitled to raid money from pension funds and sovereign funds and to raise public borrowing, in order to effectively operate slush fund operations for political purposes.

One prominent UMNO supporter has even confided to Sarawak Report how Najib ticked him off for complaining about corruption over 1MDB:

“He said, ‘you should stop complaining about this matter as I am using 1MDB to fund UMNO, so we don’t have to rely on deals with business to support us in future’. He was quite open about this and he supposed I would sympathise, since I too am with UMNO”

If this is case, what is there to prevent a man in Najib’s position from taking one step  further and helping himself to these hard earned pensions and religious funds saved up by trusting Malaysians?

Malaysia’s total deference to UMNO’s leadership and the woeful lack of accountability, scrutiny and checks and balances have clearly provided every opportunity for a person in Najib’s place to do just that and stuff his own pocket.

This is invidious for Najib, because it is clearly impossible for a man who has so much influence and who operates with so little accountability to avoid suspicion.

A politician must not only be honest, but be able to be seen to be so.

It does not help that Najib and his wife have started to display so much new wealth and extravagance.  The PM’s press office has attempted to explain this as ‘normal for a person in his position’.

Yet, unfortunately, it can not be explained in terms of his salary and open sources of income.

So, when the UMNO dominated agricultural cooperative fund FELDA announced this week that it was to buy out the Indonesian interests of the businessman Peter Sondakh for a vastly inflated price, the situation immediately engendered widespread comment.

Sondakh is a known close associate of Najib and is facing personal bankruptsy.  This injection of FELDA money will bail him out.

Plenty are therefore asking whether we can now expect to see generosity from the grateful businessman once again toward some of Najib’s political charities?

Over in Sarawak, for example, Adenan has been bemoaning that he is short of funds to grease the palms of expectant poor folk in advance of the Sarawak polls – Najib, on the other hand, is looking for an early win to polish his political image.

Can these politicians be surprised, under the circumstances, that plenty are now wondering out loud whether FELDA’s excessive payments for Peter Sondakh’s business interests will end up funding Adenan’s election treasure chest in a few weeks time?

UMNO cannot complain at such questions, because Najib and his party have lain themselves open to them through previous conduct, as detailed by the Wall Street Journal.

These ‘VVIps’ have taken too much power, kept too much hidden and lost too much money.

Meanwhile mysterious sources of income keep flowing through unexplained channels to fund bribes during elections and the lavish lifestyles of ministers, who are fond of telling others not to quibble or be ‘jealous’ over their ‘right’ to be rich.