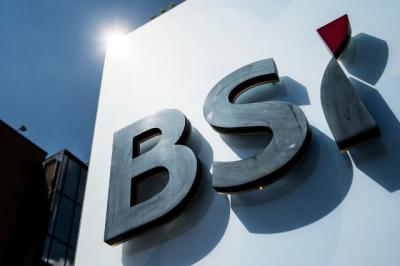 Sarawak Report’s investigations in Singapore have finally completed the money trail that began with the siphoning of USD700 million dollars out of a billion dollar investment by Malaysia’s 1MDB development fund in 2009.

The money initially passed into the Zurich bank account of a company named Good Star Limited, based in the Seychelles.

We now have evidence, obtained from investigations by Singapore’s monetary authorities, showing that over USD$500 million was subsequently transferred from Good Star’s account at RBS Coutts in Zurich into one of the numerous accounts belonging to the controversial businessman Low Taek Jho (Jho Low) at BSI Bank in Singapore.

Jho Low bought the copyright to pictures of him partying with Paris Hilton to try to force us to remove this evidence of his wealth and behaviour.

The discovery raises critical questions, not least over the status of the USD$1.103 billion that 1MDB and the Finance Ministry claim is being held in a separate account at the same bank – money which was supposedly recovered from the original deal.

After all, if so much of the money flowed out of that deal via Good Star to Jho Low, how has 1MDB managed to retrieve it all back with interest?

Separate sources in Singapore have indicated to Sarawak Report that there is in fact no actual cash in the relevant 1MDB BSI account, which was opened under the 1MDB subsidiary company, Brazen Sky Limited, merely ‘paper assets’ of indeterminate value.

Sarawak Report detailed in an expose earlier this year how USD$700 million was siphoned out of a Joint Venture, in which 1MDB invested an initial USD$1 billion into a company named 1MDB PetroSaudi International in 2009.

Documents and emails proved that the entire transaction was initiated and managed by the young businessman friend of the Prime Minister, Jho Taek Low.

Low had always denied any involvement whatsoever in 1MDB, despite widespread evidence to the contrary:

“I was involved in the setting up of TIA [Terengganu Investment Authority] from January 2009 to mid-May 2009….. Subsequently, as I understand from news reports, TIA was federalised to become 1MDB. I don’t play any role in 1MDB, and I did not get compensated by 1MDB or any other government-owned entities although some blogs have mentioned that I did. That is untrue”. [Jho Low speaking to The Star July 30th 2010]

However, the documents obtained by Sarawak Report proved that the $700 million was transferred directly from 1MDB to the company Good Star Limited during the signing of the Joint Venture, under the guise of a ‘loan repayment’ to the joint venture partner, PetroSaudi International.

Good Star Limited, which is based in the Seychelles, was a third party with no link to PetroSaudi or to the 1MDB Joint Venture deal. 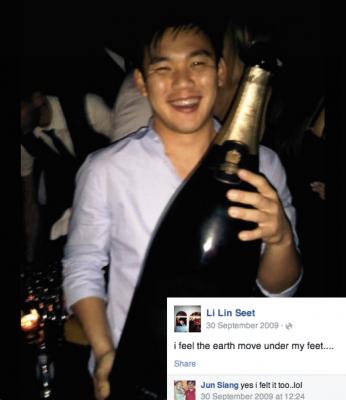 Seet recorded on Facebook his reaction to the 1MDB deal (29 Sept 09) and then the week of partying at Las Vegas straight after.

But further documents show that a signatory for Good Star was Li Lin Seet, who acts as Low’s deputy in various companies, including Low’s current flagship vehicle, Jynwell Capital, based in Hong Kong.

These facts clearly indicated that the 1MDB money, which had been supposedly designated to pay back PetroSaudi’s unusual loan arrangement, had in fact come under the control of Mr Low.

Sarawak Report further established that in September 2010 an additional USD$160 million was  transferred to Good Star, following a subsequent ‘Muharaba Loan’ agreement signed between PetroSaudi  and 1MDB – a deal which was also master-minded by Jho Low.

Yet again, the diversion of so much money to a third party company, with no connection to the actual loan agreement, was never explained by 1MDB.

Sarawak Report has now obtained copies of highly confidential documents that were submitted by the regulatory authorities in Singapore to various bodies in Malaysia tasked with investigating the missing billions of ringgit from 1MDB.

These include information obtained from the Singapore branch of the Swiss Bank BSI, relating to the 1MDB Brazen Sky Limited account and information about Jho Low’s own accounts at the very same bank. 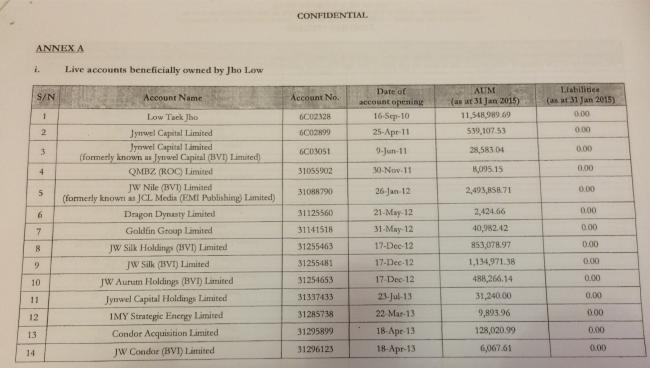 No nonsense investigation into Jho Low’s BSI accounts by Singapore, but what is going on in Malaysia?

BSI has surrendered full details of all the relevant accounts to the Singapore authorities, including a long list of personal and business accounts belonging to Jho Low. 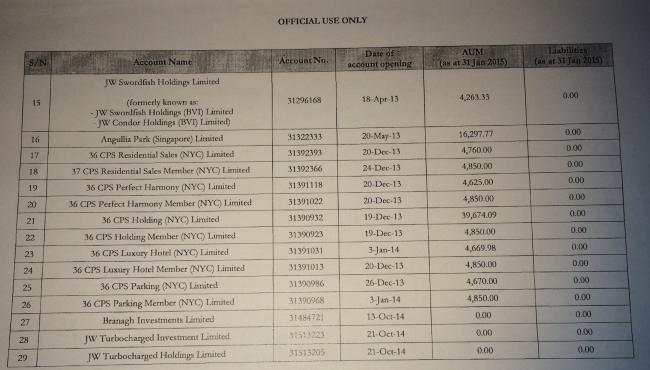 The bank also reported that Jho Low had opened a further 19 still active accounts in October 2014, none of which have yet received any money into their accounts.

The above companies all have matching holding companies with separate accounts at the bank and were mostly opened on 14th October 2014.

According to the official documents in our possession, Jho Low opened an account at BSI Bank Singapore 14th September 2010 under the name of the Abu Dhabi-Kuwait-Malaysia Investment Corporation (ADKMIC), of which he was described as being the beneficial owner.

Followers of Jho Low’s business dealings will know that ADKMIC was the name of the company fronted by him in July 2008, which had previously engaged in the buy up of a 53% shareholding in the Taib family’s UBG group under a subsidiary called Majestic Masterpiece Sdn Bhd.

Jho Low became a Director of UBG with an acknowledged personal stake in the company. 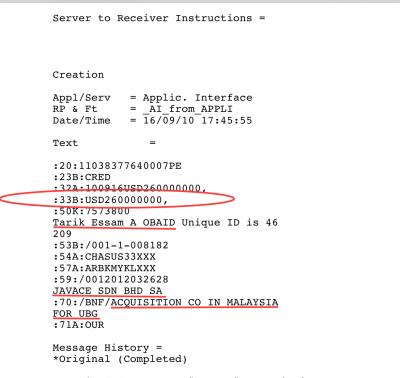 Subsequently, the previously unheard of oil company, PetroSaudi International bought out the entire banking and construction group in late 2010.

The buy up followed the earlier joint venture with 1MDB in 2009 and the subsequent payment of a USD$500 million ‘Muharaba Loan’ by 1MDB to PetroSaudi, completed 8th September 2010.

1MDB and the Ministry of Finance have always flatly denied that 1MDB money was used to finance the purchase of UBG by PetroSaudi.

On 16th September 2010, just one week after the Murabaha loan was made to PetroSaudi, a USD$260 million transfer of funds was made by the company’s Director Tarek Obaid to Javace Sdn Bhd, the company he used to purchase UBG.

Emails sent between members of the under-cover UBG bank team, who were working at 1MDB under Jho Low at the time (known as Project Uganda) explained how the Muharaba loan would have to go via the 1MDB Petrosaudi Joint Account first, in order to satisfy the Malaysian Central Bank.

But then it would be used to finance the UBG deal, said this email:

These instructions clearly detailed how the $500 million loan was to be divided into a further payment of USD$160 million to Good Star Limited, with the remaining $340 million going into PetroSaudi’s own account.

From this, the instructions say, USD$260 million was then to be forwarded to PetroSaudi Director Tarek Obaid, who then channelled the money into the UBG buy out vehicle Javace Sdn Bhd. 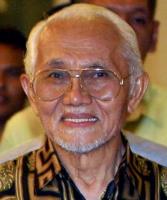 This completed ADKMIC’s profitable exit from the UBG Group.

According to the BSI Bank records, Jho Low proceeded to then open his beneficially owned account under the very same name at their Singapore branch on October 11th of the same year.

The BSI records then detail a series of huge money transfers from Good Star Limited’s account in Zurich (which had directly received $700 million plus $160 million from 1MDB) into this new ADKMIC account over the following two years.

According to the figures, which the bank has submitted to the Singapore authorities, 7 separate payments were made from the Good Star Limited account at RBS Coutts Bank, Zurich into Jho Low’s beneficially owned Abu Dhabi-Kuwait-Malaysia Investment Corporation Account No 6C02395 between 28th June 2011 and 4th September 2013.

The BSI Bank Singapore record shows that the account was then closed by Jho Low on 18th February 2014, just a fortnight after the final payment from Good Star Limited.

It means that there is documented information that a total of at least USD$860 million was paid from 1MDB into Good Star Limited’s RBH Coutts Zurich account between Sept 2009 and Sept 2010.

There is also documented information that USD$$528,956.027 million was paid between June 2011 and Sept 2013 from the same Good Star Limited Zurich account into the BSI ADKMIC account in Singapore, of which Jho Low was the registered beneficial owner.

Given this crucial evidence was provided by Singapore to Malaysia last month, there is growing concern over why so little official action appears to have been taken?

Yet, so far, insiders say there has been no reaction to the information. 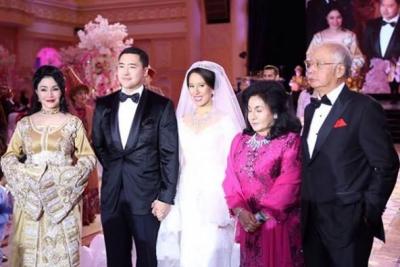 Ides of March – Najib and Rosmah spent the month and several million ringgit on several wedding ceremonies for their daughter. Time to attend now to growing questions about the economy?

By contrast, Sarawak Report has learnt that a senior figure at BSI Bank Singapore was suspended last month, in what appears to be a development linked to this investigation.

However, insider information indicates that perhaps the PM has been conducting his own private investigations into the matter, since Sarawak Report has learnt that he and his wife Rosmah held a private meeting with Jho Low in Istanbul last week, during a stop-over on their way to Kazakhstan in their new private jet.

Since the couple are known to be very close friends of Mr Low, perhaps he confided the details of his transactions to them?

If so, several official bodies are hoping that the PM will make a public statement on the matter as soon as possible to the relevant authorities.