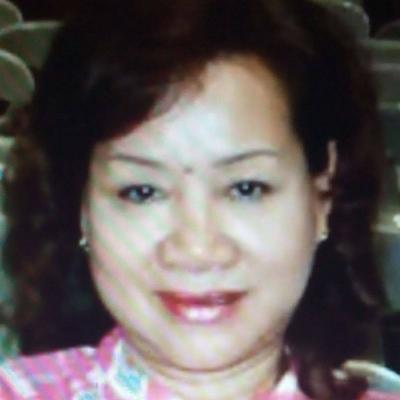 How is it that the family of the secretary to the Sabah Director of Forestry, Sam Mannan, has ended up with a whopping great logging concession in a once protected forest reserve?

Sam Mannan has promoted himself as a man who is struggling as best he can to conserve what is left of Sabah’s Forestry, after years of plunder by the politicians he has been working for and their cronies.

He has explained that in doing so he has to be ‘pragmatic’, by which he means that the remaining depleted forest reserves need to be subjected to what he describes as ‘mosaic plantations‘.

This involves permitting a chequer board of oil palm concessions across the approximately 300,000 hectares of remaining natural forest areas in the state. 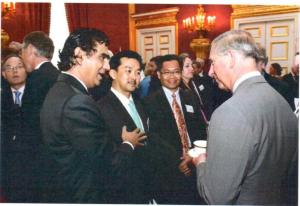 The initiative has released huge territories for clear fell logging right within protected areas and it is a system that is notoriously difficult to monitor and protect from illegal encroachments beyond the licensed boundaries.

Mobile saw mills have also been allowed to operate within these remote regions under this scheme, which again are virtually impossible to monitor.

Critics say the impact will be disastrous therefore and that Mannan is generally playing up to foreign environmental groups on the one hand, with much talk of conservation and ‘forest management’, while finding new ways to open up even more logging in once protected areas on the other.

Among the favoured companies which have been given licences to indulge in this so-called ‘mosaic plantation’ activity are an outfit called Rinukut Sdn Bhd and also TSH Resources, which is owned by the well-connected businessman Dato Kelvin Tan.

Magdalena Maikas is Sam Manan’s secretary at the Forestry Department 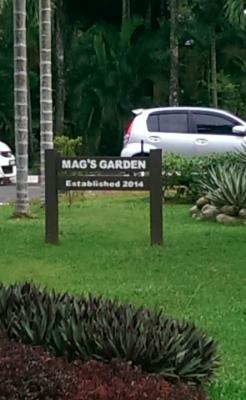 So, what has this to do with Mannan’s secretary, who is generally known as ‘Mag’?

Magdalena Maikas, who comes originally from Tambunan, according to her Facebook entries, has worked for some time at the Forestry Department and is known to be extremely close to her boss.

Indeed her sway is so absolute in the department that the lawn outside has even been named in her honour.

A special plaque has been erected in the past year, designating the entrance to the Forestry Department “Mag’s Garden – Established 2014″!

Less amusement has been caused by a further renaming of a protected area of Sabah’s Northern Gunung Rara area, which was gazetted as “Mount Magdalena” in 2012.

Mount Magdalena is now billed as consisting of high conservation value Forest Reserve Class 1 Forest – but it previously appears to have been used as commercial forest, which indicates that it is fact a piece of degraded territory now being promoted as if it was virgin forest protected by the state, something critics again say has been common practice under Chief Minister Musa Aman’s management:

“Mount Magdalena FR was gazetted as a Protection FR – Class I on 14th November, 2012 vide GN 7/2012. It was formerly under Gunung Rara FR, which is a commercial FR – Class II. Gunung Rara FR is under the Sabah Foundation (SF) Concession Area.”[Sabah Forestry Department] 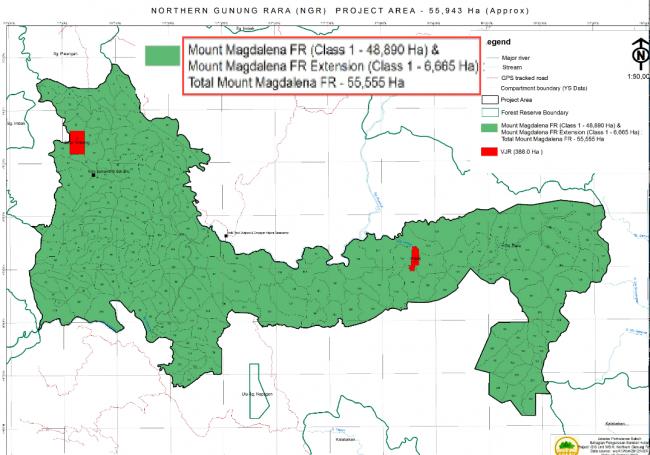 However, it is evident that the privileges of Mag Maikas do not end with the designation of gardens and mountains in her fair name.

Records show that the Maikas family have also popped up as major timber concession holders.

And, according to police reports lodged by opposition assemblymen in 2013, it is thanks to Sam Mannan’s ‘mosaic plantation’ initiative that the concession was awarded.

The Assemblymen queried why timber royalties in the state have been plummeting, while logging is evidently going up, largely thanks to the mosaic planting initiative in once protected areas?

They named the company Rinukut Sdn Bhd as one of the companies, which has received a 5,000 hectare oil palm concession in these valuable timber areas:

So, who owns Rinukut and the rights to fell valuable timber in once protected areas and to replace it with oil palm? 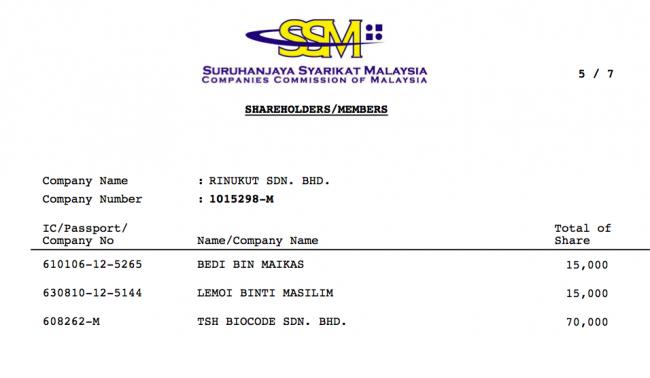 Both Bedi and Lemoi live together in Tambunan 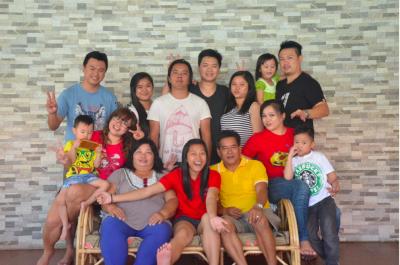 Posing with their family on Facebook. Bedi (in yellow front) is Mag’s brother and Lemoi (front) his wife

The company records of Rinukut show that 30% of the company is owned by none other than Mag’s brother Bedi bin Maikas and a lady who shares his address in Tambunan, called Lemoi Binti Masilim.

Facebook searches make plain that Bedi and Lemoi are married, but how did this modest couple come by such a valuable timber and oil palm concession?

Facebook searches also make plain that Mag Maikas and Lemoi and Bedi are all in touch and close pals, which is not surprising as they are in-laws.

Which leaves plenty of questions to be asked about what the connection might be between Mag, her boss Sam Mannan and this lucrative timber concession? 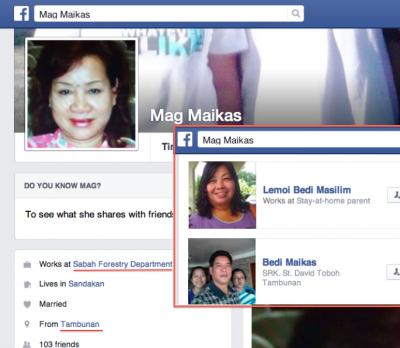 Mag Maikas comes from Tambunan, works at Sabah Forestry and her top Facebook friends are brother Bedi and wife Lemoi.. who have 30% of a whopping forestry concession

After all, the remaining 70% of the company is owned by a far more well known entity, which is none other than Dato Kelvin Tan.

Tan’s company THS Biocode Sdn Bhd is part of the THS Resources group, which also has invested in other vast areas of oil palm concessions, obtained through the Sabah Forestry Department which Sam manages.

Surely, it could not be the case that Tan has obtained this concession by giving Directorships and 30% of the company to the immediate family of the secretary of Sam Mannan, whose closeness to her boss has been a matter of considerable comment in the Forestry Department, not least because of the gazetting of a mountain after her name?

Sam Mannan may posture as a reformer of forestry in Sabah, but until the records are opened up with regard to how concessions are awarded and for what price there is no way to monitor the corruption taking place.

Sarawak Report charges Manan with conflict of interest in the awarding of this particular concession to the family of his secretary and we challenge him to publish the details of the entire transaction over this piece of public property. 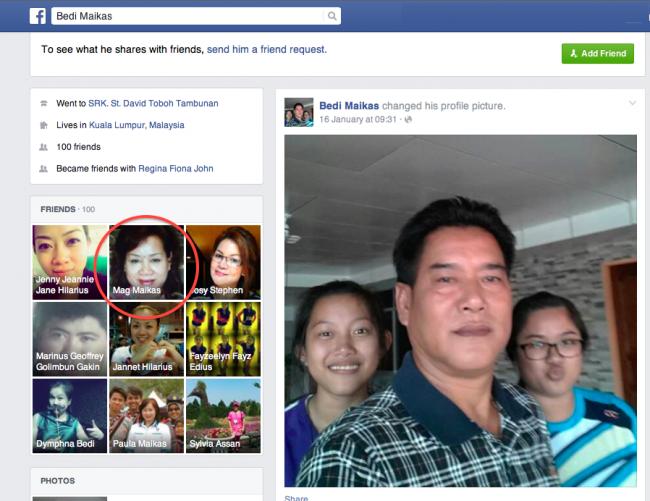 Mag’s brother and Facebook friend – is he a timber tycoon or just a nominee…. if so, who is he really a nominee for?

Bedi’s wife Lemoi is a ‘stay at home mum’ and also a timber boss?

NOTE: Following this article’s publication Ms Maikas has removed her Facebook presence from the internet and been expunged from the friend section of Bedi and Lemoi – however the MACC ought have no problems with establishing the connection between her brother and herself.