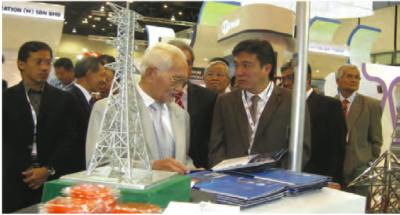 SCORE is quite simply the most ambitious industrialisation plan in South East Asia.

It is a vision of concrete, cables and cement in the heart of the most important rainforest in the world, with 12 proposed mega dams producing what is cynically mislabelled as ‘clean energy’.

Governor Taib likes this vision of cement, because he has obtained a monopoly on it for his family in Sarawak, by privatising CMS into their own hands.

CMS is also the main construction company for roads and factories, thanks to state contracts.

As for the transmission lines from all those proposed dams, Taib’s cousin is chairman of the state electricity company which is driving the project and his son owns the cable companies receiving all the contracts his cousin is handing out.

Taib’s protege, Adenan Satem, has been obliged to continue the strategy of driving through SCORE as part of the deal to succeed him as chief minister. The plan will destroy Sarawak’s main rivers and displace tens of thousands of indigenous people, who are implacably opposed to the whole project. 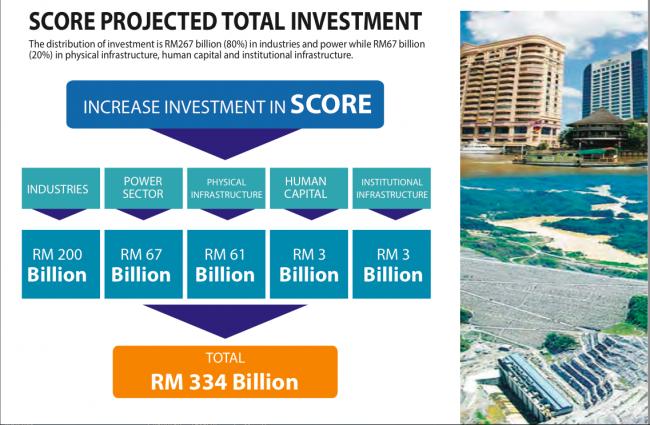 Taib plans to push RM334billion of public investment through SCORE – is he planning on getting his usual 30% ?

So, as Doctor Mahathir said in his speech to this week’s so-called International Energy Conference in Kuching, there are probably better development alternatives from the point of view of every other family in Sarawak – apart from the Taibs and their hangers on at CMS. 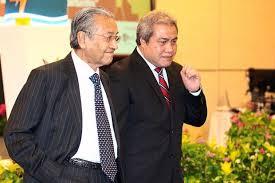 The Dr has reservations – being shown around by Taib’s top flunky, the newly wealthy Awang Tegah

What a shock this must have been for his Sarawak PBB hosts, who had regarded Dr M as their star guest and ‘key note speaker’ at the conference.

It was like the Best Man at a wedding warning the bride to run a mile!

But Dr Mahathir has reached a stage in his career where he clearly feels no constraints on saying what he thinks.

He also cares more about his country than his own bank balance, according many round about him – something that no one has ever knowingly said about Abdul Taib Mahmud, for whom Sarawak has become a private ATM.

What Dr M said to Sarawak Report about SCORE

The former PM had in fact defended the development of dams in Sarawak in the week previous to his Kuching speech, when he granted Sarawak Report an interview in KL. 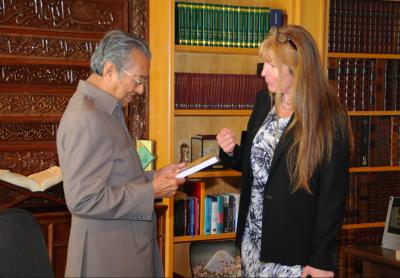 Handed the book Money Logging by SR – he seems to have opened it.

After all, this old UMNO warhorse is as implicated as anyone in the building of the existing Bakun Dam, which is already producing more electricity than there is present need for in Sarawak (the latest information from Sarawak Hydro is that 7 out of 8 of the Bakun turbines are running, but only at half capacity, generating at most 1,900mg out of the 2,400 it was built to supply).

So no surprise that Mahathir repeated the same attacks on western critics of Malaysia’s environmentally destructive history of development policies which he has employed throughout his career.

When Sarawak Report asked about the rights of the native people of Sarawak he attacked other historical crimes by comparison:

“We have a good record of managing [the rights of indigenous people] – much better than the decimation of aborigines and native Americans. Our aborigines have increased in number since we took over the running of the state” he claimed. “We have done better than the West in helping people adjust”

It is a figure that environmentalists will dispute and the ex-PM was giving modern Malaysia a very low benchmark by making a comparison with such appalling historical exterminations.

However, he was giving no quarter to outside critics on such matters, on the basis that Malaysia needs “space” for modern agriculture and businesses –

“They [native Sarawakians] don’t seem to mind about not being allowed to live in the jungle” he opined of logging and plantation on state and native lands, “it is outside people who come and tell them look you are being deprived”

So far indeed, so Taib would agree with his former political colleague.  However, Sarawak Report then challenged Mahathir on the issue of corruption:

“If you look at an argument about development, for example, where both sides have a justifiable position, but if you see that one side has a conflict of interest, because the position they are promoting benefits them financially, this in our view [Sarawak Report’s] should be exposed, do you sympathise?” we asked.

Dr Mahathir was adamant in his reply:

“Corruption should be exposed, I agree with you. Indeed there are things that are being done by the government which they shouldn’t do”

When pressed further about SCORE itself, the retired PM acknowledged he was not yet fully informed. “I do not know  about the extent of the forest that will be inundated” he said, the week before the Kuching Conference.  However, “I think there has to be a balance in the way we think of our forests .. excess cutting is something I am not for and very much against. Whether it is legal or illegal, I think even the ‘legal’ [logging] should be reduced, because it is destroying the environment”.

Was the Kuching International Energy Conference a turning point for the credibility of SCORE? 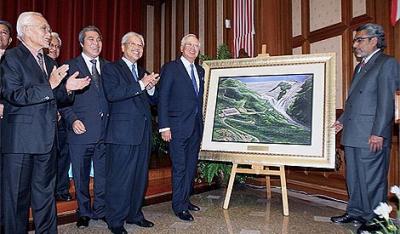 Look how we planned to destroy the jungle! Taib, Awang Tengah and PM Najib Razak unveiling the world’s most depressing painting

It is clear, therefore, that in the days before he was due to speak at the Kuching Energy Conference about SCORE the retired PM did his homework.

He must have looked into the full extent of Taib’s pet ‘master plan’ that, for far too long, Malaysia’s Federal Governent has been pleased to leave to the world’s most autonomous state leader.

After all, SCORE makes Bakun, which till now was the biggest dam project in South East Asia, look like just a brick in the wall.

Campaigners, who had become alert to ‘Dr M’s’ more open mind, in comparison to the single tracked and frankly greedy determination of Taib to push ahead with this project, sent materials and a letter explaining the unnecessary extent of all these plans and the greedy, selfish motivation behind it.

Dr Mahathir must have read these materials and clearly the matter resulted in him giving a speech that no one expected, not even Sarawak Report towards which he had presented a considerably different perspective the week before.

If Dr M can re-think why can’t PBB/Sarawak BN?

Dr Mahathir, after a lifetime of supporting development and attacking foreign critics, clearly considers that SCORE needs a re-think and he called for the sort of common sense that all objective people have been begging for in Sarawak.

This is the biggest proposed industrialisation project in South East Asia and yet it has been developed virtually in secret and with the minimum input of technical know-how from outside of Sarawak.

Where has been the debate, the due consideration, the open planning and expertise? 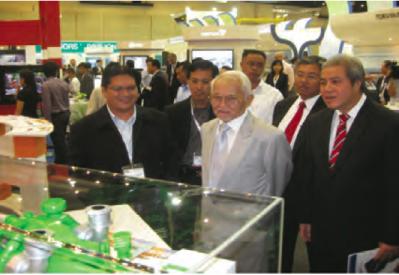 More fantasy factories, but economists are asking where are the real ones?

This is all the project of one old man in a hurry, who will brook no opposition or changes to his grand plans to turn Sarawak into a Legoland of projects all pouring out billions of dollars for companies controlled by his family.

His vision is to drive all the wealth of Sarawak’s natural resources into an offshore portfolio that he presumably plans to control when he retires from his mortal coils.

The Pharaohs built pyramids and the world is littered with similar White Elephants demanded by dictators – SCORE has all the classic hallmarks yet its scale is appallingly destructive in such a priceless region of the world.

Of course, the international delegates to the Borneo Convention Centre (built by CMS and run by Taib’s sister) all brought their own greedy, blinkered agendas to Sarawak.  Each had been willing to turn a blind eye to the shocking corruption and shortfalls within this project and they will have been every bit as disappointed as Taib to hear Dr Ms words.

Mortified by the words of caution from UMNO’s most influential public figure, the Sarawak State Government has now announced that it will now look at some of the more eco-friendly alternatives for generating power suggested by Dr Mahathir.

Will this produce a turning point for SCORE?

Will someone now remove Taib’s Lego set, sweep away those plans for 12 new mega-dams and tell him to leave such matters to the experts and the fuller course of time?