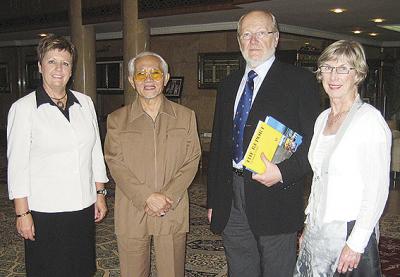 Former Vice-Chancellor James McWha with Taib in 2011 (clutching a copy of the puff piece ‘Country Report’ by vanity publishers Oxford Business Group).  In the main picture Taib walks with McWha through the court named after him.

In a letter received today by the campaign group Bruno Manser Fund, the university’s Vice-Chancellor, Professor Warren Bebbington acknowledged a major policy reversal, in that Adelaide is at last reconsidering the naming of the ‘Taib Mahmud Court’, designated in the billionaire’s honour in 2008.

And, in a crushing snub, Professor Bebbington also revealed that the university had refused a request made by Taib to attend its 140th Anniversary Gala Dinner last year, effectively branding the former pupil as a persona non grata (unwelcome) at the university.

“The University of Adelaide has not received any donation from Taib Mahmud for nearly ten years”, the President and Vice-Chancellor wrote in a personal letter to BMF Director Lukas Straumann.

“Since then we have had no dealings with him and indeed, late last year, refused his request to visit and attend our 140th Anniversary Gala Dinner.

“I will draw your request for the University to rename the Taib Mahmud Court to the attention of our Estates Committee. 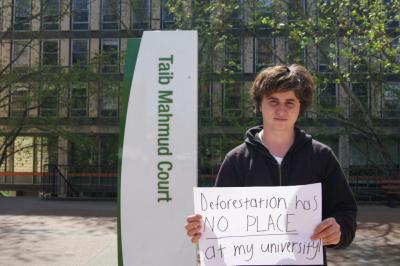 The decision by one of Australia’s premier universities to disassociate itself from Taib in this manner – publicly turning down his request to visit – is a significant indicator of the growing understanding and concern in Australia over the corruption and destruction of Sarawak by its ruling family of the last four decades.

It is a far cry from just a few years ago, when Taib was treated as one of the University’s most distinguished former pupils; made patron of the Australian Universities International Alumni Association and bestowed with Austrailia’s highest honour, the Order of Australia.

Campaigners, who have protested the honours given to Taib, in return for financial donations, will be celebrating the success of their efforts, which were ignored for years.

These include sixteen Malaysian and Sarawakian alumni, who had written to the former Vice Chancellor Professor James McWha in December 2010 on the matter, only to be ignored:

“We are a group of Adelaide graduates from East Malaysia (the Malaysian states of Sabah and Sarawak). We are very concerned about the links between the University and Pehin Abdul Taib Mahmud, the chief minister of Sarawak. Abdul Taib is a law graduate and one of Adelaide’s most prominent graduates in Malaysia and the Asian region. He has donated millions to the university. He has also been awarded Australia’s highest award, the Order of Australia.

However, the reality is that Abdul Taib is also a kleptomaniac. He has been in power for the past 30 years in Sarawak and, on the best estimates, stolen or corruptly taken at least USD5 billion from the peoples of Sarawak. This fact is well known to many people, more so now that a website SarawakReport.com has published clear evidence of his corruption”, the former pupils complained 1st Dec 2010. 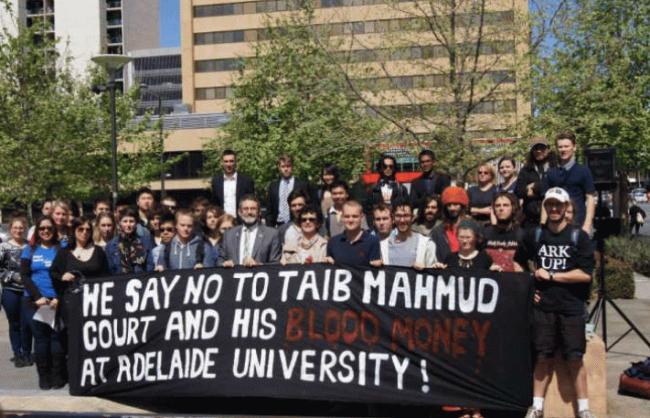 Students at the university, who had mounted a series of demonstrations are also believed to be jubilant at what appears to be a sudden about-turn of policy by the university.  But the sequence of events indicates that this had been a decision carefully arrived at in response to information received.

BMF had forwarded a copy of the book Money Logging by Lukas Straumann to Professor Bebbington and it was this that had prompted his clear response. 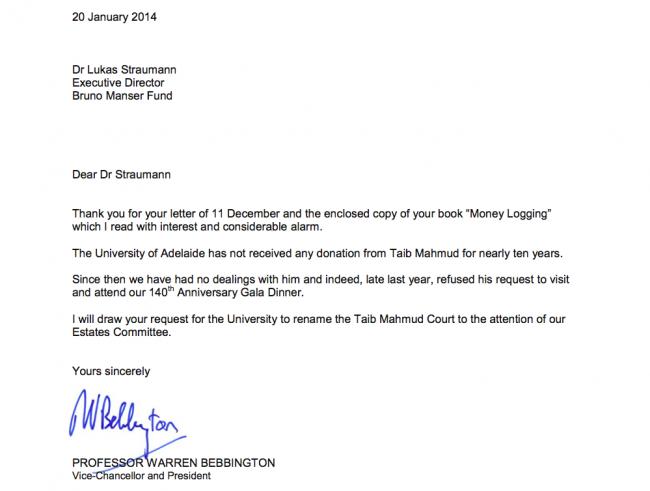 The letter in full

“Lukas Staumanns book ‘Money Logging’ has provided the university with compelling evidence that Taib’s corrupt behaviour proves he is not an individual that an Australian university should associate with. Now to save further embarrassment from tainted association with Taib and endorsement of his appalling practices, drop Taib Court from the university grounds.”

The Tasmanian based environmental group also pointed out that it was time action was taken to remove the Taib family company Ta Ann, which is the major timber concern creating destruction in the island’s remaining wilderness areas.

In our initial expose in 2010 Sarawak Report detailed how Taib had been increasingly honoured by the University of Adelaide in a clear response to large donations received from their ‘Ultra High Net Wealth’ former law graduate, whose family also owns the Adelaide Hilton and surrounding shopping parade in the heart of the city.

According to our research his first gift to the university was shortly after taking full control of Sarawak in 1987, when he helped to refurbish the Law School and ironically to establish the Australian Centre for Environmental Law.  In 1994 he was awarded an honorary Doctorship.

In 2002 Adelaide announced that Taib had generously donated AUS$300,000 over the years and that a small amount of that money had gone to the creation of a ‘Malaysia Room’ at the university. 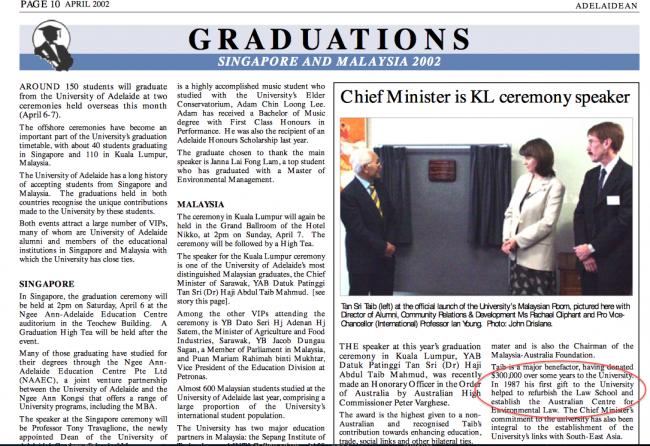 After this Taib expanded his ‘distinguished’ role in Australian academia becoming Patron of the International Alumni Association and Chairman of the Malaysia-Australia Foundation.  There are numerous Malays and Sarawakians attending Australian universities and Taib was being treated as their most senior, successful and distinguished representative! 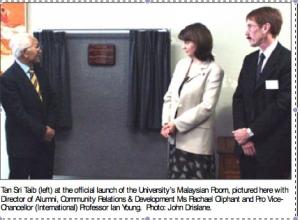 Launch of the Malaysian Room in 2002

The accolades culminated in 2008 when a large chunk of Adelaide’s campus was named the Taib Mahmud Court in his honour.  Adelaide has so far refused to say whether this final gesture was in response to yet another donation by the Chief Minister, now Governor of Sarawak.

However, today’s letter indicates that the most recent donation was 10 years ago, therefore in 2005, later than the acknowledgement of $300,000 in 2002.  It therefore seems likely that there was a further donation between 2002 and 2005 which had precipitated the naming of the Taib Mahmud Court.

Having revealed the extent of Taib’s generosity to Adelaide back in 2010, Sarawak Report challenged the university to explain how it believed that such sums could have been obtained legitimately by a politician who has been on a public fixed salary for all but two years of his entire working life.

After all, Taib is well known to have attended the university on a Columbo Scholarship, confirming the well-known fact that he was one of ten children from a poor family.  His father was a carpenter working for Shell. 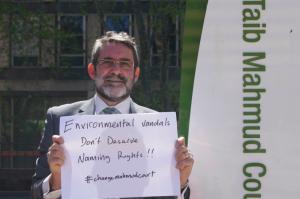 Arguments won through at Adelaide

Taib’s roles as Chief Minister and Governor preclude any involvement in business activities and his obligation is to avoid conflicts of interest with regard to concessions and contracts to family members.

Yet, to the contrary, there is abundant information that demonstrates that Taib’s acknowledged vast wealth has been obtained from the proceeds of corruption and abuse of power, much of it laid out in Sarawak Report and campaigned about by NGOs such as the Bruno Manser Fund.

For five years Adelaide refused to answer our questions or respond to information requests on the subject of Taib Mahmud.  But, at last their position has finally changed.

Increasingly, the world is no longer prepared to turn a blind eye to Taib and the wealth he has taken from the people and forests of Borneo.

Today, Lizzie Taylor, a student at the university who has campaigned tirelessly for the renaming of the Taib Mahmud Court told Sarawak Report:

“I am excited that finally the Vice Chancellor has listened to and payed attention to the ongoing campaign. This has been such a huge step forward .I am thrilled that the university is considering no longer having a courtyard in a learning institution honouring such corruption. “