In an exclusive personal interview granted yesterday to Sarawak Report, former PM Dr Mahathir Mohamad has made clear that he is not satisfied with the latest announcement by 1MDB, claiming that the US$2.32 billion (RM8.24 billon), which was supposedly parked in the Cayman Islands, has now been “fully redeemed”.

“The explanation does not enlighten us on anything”, the veteran politician insisted. “I want to know which bank it’s kept in now.  A billion dollars, you must keep it somewhere, you see.  I don’t know where the money is – that is part of transparency.”

Dr Mahathir, who has been the most powerful and vocal critic within BN over the management of the so-called 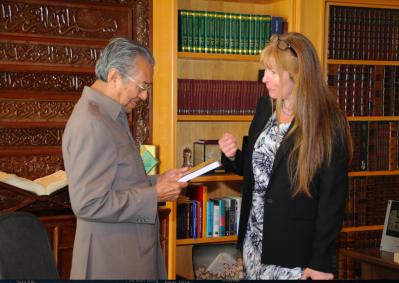 Receiving a copy of Money Logging, the book about timber corruption in Sarawak

sovereign development fund, had invited the Editor of Sarawak Report to the Perdana Leadership Foundation in Putrajaya to discuss issues relating to Sarawak’s environmental and human rights record.

However, he readily showed willing to also discuss matters of corruption and his public concerns about the management of the so-called One Malaysia Development Fund.

For months Dr Mahathir has joined opposition spokesmen in demanding an explanation as to why billions of ringgit were first invested in a little known petroleum exploration company called PetroSaudi and then afterwards parked in a mysterious investment fund, allegedly in the Cayman Islands.

The first move of the fund’s new CEO Arul Kanda Kandasamy, who was appointed in the wake of the shock resignation of Mohd Hazem Abdul Rahman just last week, was the surprise announcement over the sudden supposed repatriation of the missing money.

SR questioned the former PM and Finance Minister whether he was now satisfied that the matter was closed. To the contrary, he insists that the mystery remains and told Sarawak Report that he is by no means satisfied by the evidence that the money has indeed been fully repaid.

“I question the explanation, it’s not something I can accept.  It is very shallow…. I question the creation of 1MDB and how it is managed. They [the managers] came to see me, but they couldn’t explain how the money was raised and why the power plants were brought at such high prices and the commission that was paid to Goldman Sachs”, Mahathir elaborated 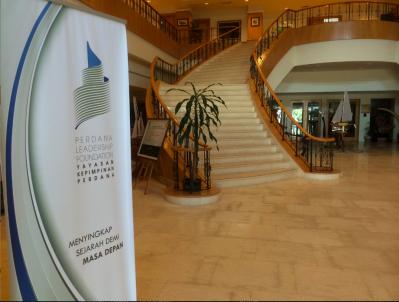 The refusal of BN’s most powerful and vocal critic on this matter to be convinced presents a major challenge to the fund and its chief manager, the Prime Minister.

Can they present concrete evidence to back up the claim that all the missing millions have been returned?

In the course of the day the DAP politician Tony Pua has also weighed in with a similar demand for transparency.

Dr Mahathir is believed to have inside information that raises serious questions about the integrity of the fund’s investments and is refusing to let the matter drop it seems, even though the fund appears to have now plugged the most controversial gap in its accounts.

“I don’t think that it serves any purpose.  That’s my difference with the government.  I don’t think that it is necessary for us to have a fund like this.  We are doing well enough without a fund… in the first place they got the money to lend to the Saudis and they they put it in hedge funds. The government should not be gambling money in hedge funds”, Mahthir said, reiterating his main arguments against the development fund.

However, yesterday the former PM acknowledged a major structural issue with the way that Malaysia’s public finances are managed, which is the lack of transparency which has allowed such scandals to develop with little or no outside scrutiny of the 1MDB fund.

Mahathir agreed that there is a greater need for transparency in order to prevent mismanagement of funds on the scale of 1MDB and it is plain that he is not in the mood for accepting assurances that Malaysia’s public funds are in proper safe-keeping without proper evidence being provided.

More from the exclusive interview with Sarawak Report later.