What Next Taib? As 'Money Logging' Flies Off The Shelf At Amazon 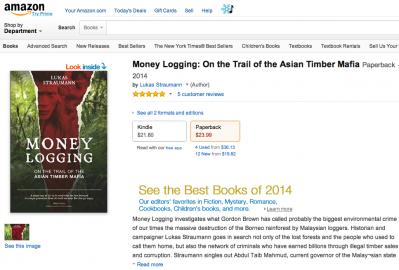 Back on sale, despite the threats and denials by Taib’s lawyers

According to a series of breathless reports in Taib’s family newspaper Sarawak Tribune, which is edited by his daughter Hanifah, Taib Mahmud has been touring India in his capacity as Head of State.

So far, however, the Taibs have been feasting not with officials or politicians.  Rather he has been entertained by the chairman of a major property developer ETA Star.

Is CMS looking for more investors in the “vast land bank” (to quote its own annual reports) handed to the company from the state while Taib was in office?

If so, the testimony currently being heard in court in the corruption case against the former Chief Executive of Sime Darby is instructive.

Sarawak businessman Chew Chiaw Ann testified yesterday that the Sime Darby CEO had a meeting with Taib and then said he would be willing to pay CMS RM400million to acquire plantation rights on native customary lands in order to access them. 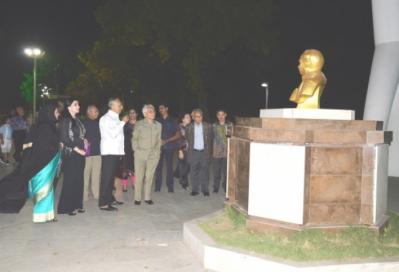 So, will ETA Star be building properties on Kuching Isthmus, thanks to land purchased from CMS at top dollar rates – land which Taib handed the company for relative peanuts?

These are the very corruption issues being explored in the key book on what has happened to Sarawak over the past decades, Money Logging by BMF’s Dr Lukas Straumann.

Taib has fired off legal letters and BN cyber-troopers are trying to allege that he has taken ‘legal action’ to prevent the publication, distribution and sale of this well-researched book.  However, Amazon has now clearly decided to ignore the threats and is selling the book.

Taib and his expensive lawyers now have to decide whether he wishes to take genuine legal action and face scrutiny in court or slink away with their tails between their legs.

Below is an excellent review of the book [see also Malaysiakini] 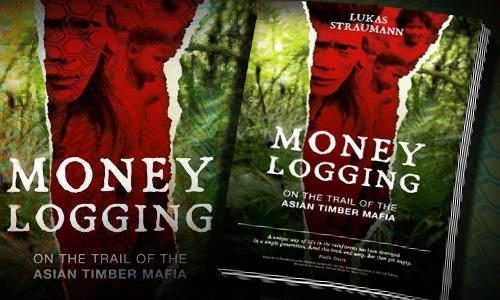 As mafia stories go, this one has it all: fraud, ill­ gotten riches, intrigue, hidden loot, violence, privileged family, ruined lives of others – and a godfather.

But this plot bears a unique twist, for the godfather is the head of government, and the bounty is more than 100,000 square kilometres of virgin forest.

The result is devastating: 90 percent of that forest put to the chainsaw, to sell timber worth US$50 billion.

The scene seems unfathomable, the damage untold. And yet, such a tale of feudal kleptocracy, ecological catastrophe and heritage destruction unfolded in Sarawak over three decades under former Chief Minister Taib Mahmud (left).

An excellent and important, and gracefully written, the new book tells the story.

Money Logging: On the Trail of the Asian Timber Mafia, by Lukas Straumann, investigates the pillaging of Sarawak’s virgin forests and unveils shadowy dealings of Taib Mahmud and kin, compellingly documenting plunder, nepotism and corruption unlike anything we’ve seen in Malaysia.

The author is director of the Switzerland­-based Bruno Manser Foundation (BMF), which since 1990 has championed the protection of Sarawak’s verdant treasures and checked th machinations of Taib’s administration and the opaque money trail of the family’s obscene wealth.

Taib has persistently denied involvement in his family’s commercial dealings; he adroitly delegates and drives from the back seat. Company ownership profiles, which are not difficult to procure, show his immediate and extended family’s extensive holdings. But his name is conspicuously absent.

The campaign made a breakthrough in 2010, after many years of scrutiny and monitoring, when an informant came forth with a dossier of evidence and testimony.

The book opens with a riveting account of Straumann, together with Clare Rewcastle of sarawakreport.org, meeting Ross and Rita Boyert, who managed the Taib family’s assets through Sakti International Group, based in San Francisco.

In 2006, the Boyerts were abruptly dumped, then hounded and terrorized. They employed all sorts of tactics to make the encounter and information sharing clandestine. The outcome was a revelation: “Here, for the first time, we had proof of the chief minister’s secret wealth.”

The sources of the Taib family’s opulent lifestyles became much clearer. Besides Sakti, massive funds were also parked under the Sakto Group of Ottawa, where first daughter Jamilah Taib occupies one of the most expensive mansions in the city, have main vehicles for the family’s wealth.

The book furnishes black and white evidence. Boyert had disclosed a 1988 document, under California’s Corporations Code, showing Taib’s brothers and children holding the majority of Sakti’s shares “in trust for Abdul Taib Mahmud”.

Godfather Taib is in control. How could it otherwise?

Loot of the forest

The ultimate source of the loot is Sarawak’s once vast and pristine forest. In 1985, Taib dissolved Sarawak’s forestry department and placed logging concessions and plantation licenses directly under his watch.

Money Logging meticulously weaves together the bewilderingly large and complex web of theft and deceit, lucidly explained and helpfully diagrammed.

The illicit flow of funds starts from the creation of a monopoly over timber exports from Sarawak, to the receipt of kickbacks from importers to a Hong Kong­based shell company, transfer of those kickbacks to an investment arm which then channels the money to real estate purchases in Canada.

Of course, the empire is also domestic – most of it, in fact – and leveraged across many sectors.

Combing through ownership profiles, Straumann and associates have found that the Taib family owns 333 Malaysian companies and 85 others around the world. The total wealth may exceed US$15 billion.

Through the Taib Family’s Cahya Mata Sarawak, the clan holds stakes in myriad industries, including cement and intimately related to that, dam construction. Sarawak is spiralling in a frenzy of dam projects and energy oversupply that must be the definition of insanity.

There is a broader madness and contempt for life demonstrated in the eagerness, even seeming delight, in mowing down forests, damming rivers and destroying livelihoods with impunity.

The search for a sliver of redemption is fruitless. For over two decades Sarawak has been the largest exporter of tropical timber in the world.

The felled trees have predominantly been exported as logs – raw, unprocessed, with scarcely any value addition or creation of skilled jobs. No forward linkages to furniture or craft industries, no efforts at sustainable forestry.

In 2009, the state’s land cover consisted of just 11 percent virgin forest, 46 percent secondary forest, and 43 percent for other use, mostly for oil palm.

The policy – if one exists at all – has been to chop down as many trees as possible, replacing biodiversity with commercial crop monoculture.

Sarawak will still show shades of green from the sky, but the foliage has been comprehensively degraded.

Sarawak is being turned into an expanse of plantations and reservoirs. Malaysian logging
companies have rampaged across tropical forests around the world, now that there is little left to chop down in Sarawak.

Money Logging is richly informative on recent environmental and commercial crimes, but Straumann, as an historian, ensures that the longer story is told.

He engagingly walks us through Sarawak’s past, from the positioning of the Melanau, one of
Sarawak’s smaller ethnic groups, as kingpins under Taib’s uncle Rahman Ya’kub, who was Chief Minister from 1971 to 1982.

Importantly, Rahman and subsequently Taib enjoyed unwavering support from federal government, laying the platform for Taib to pursue his ruthless ambition, hubris and greed from 1982 until he stepped aside in early 2014.

The book also takes us on a passage through Sarawak’s luminous heritage and pays tribute to its beautiful people.

The Penan, nomadic hunter gatherers from time immemorial, have perhaps endured the most grievous hurt from the massacre of Sarawak’s rainforests.

Straumann pays due tribute to the organization’s founder and namesake, Bruno Manser, who lived with the Penan for many years, became adopted as their son, spurred them to protest against the rampaging logging companies, and organized map­making as a means to claim ancestral, customary lands and international campaigns among importers of Sarawak timber.

We read as well of other fighters for justice, ordinary people doing extraordinary things in the deep hinterland, who have organized logging road blockades, and others who have fought in the courts for native land rights.

Their stories show how small communities in Sarawak, and a little band of Swiss activists, can stand up to big powers – even financial behemoths and the system that feeds them.

Complicity of Taib’s bankrollers, including Europe­based UBS and Deutsche Bank which BMF is well placed to scrutinize, shows that capitalism loves lucre no matter how filthy.

It is impossible to read this book without high degrees of sadness, anger, even despair.

So much devastation and corruption, so little we knew, so late to get a full account.

Despair is a more natural response, optimism an intentional choice. The book underscores the importance of continuing the fight for Sarawak’s forests, rivers, and the rights and livelihoods of indigenous peoples.

We will do well to take heed: “The Sarawak rainforest is far too important a part of the world’s natural heritage for it to be left in the hands of the Taib circle, which has already wrought irreversible damage in the span of a single generation”.

There are glimmers of hope. In a small, autonomous act of in a resistance and restoration, communities have set up a self­governing Penan Peace Park. Native land rights cases have returned confiscated land back to rightful owners; many of these are ongoing in the courts.

In the public sphere, the powerful and vital contents of Money Logging more than deserve their place.

This is a book you want to read, and tell others to read. And while at it, spread the word on the Bruno Manser Fund and Sarawak Report, and support the valiant efforts of Save Sarawak Rivers Network and other groups striving for Sarawak’s better future.

The evidence and arguments have not been refuted – indeed, they meet a wall of silence and desperate attempts to suppress exposure.

The Malaysian delegation to the International Tropical Timber Organisation barred the BMF from launching it at the body’s annual conference last month.

With only one local distributor, Money Logging is not so easy to find. But let not this riveting, illuminating, infuriating book elude our attention, the way Taib’s corrupt, destructive reign did.

LEE HWOK­ AUN is an economics lecturer. Money Logging is available at http://gbgerakbudaya.com/bookshop/.