Taib You Cannot Be SERIOUS! 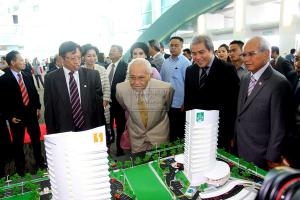 Nice new projects for CMS – two government buildings for RM70million each and no tender!

Why did Governor Taib Mahmud go to so much trouble at the 40th anniversary ‘celebration’ of Sarawak’s blood-sucking conglomerate CMS, to tell his audience that he has done nothing to favour this monster company, which is largely owned by his own family?

The old boy went on and on about it!

Surely, no one had been so indelicate at such a gathering as to mention the fact that CMS has laid its hands on just about every lucrative contract in the state?

So, why did the ex-Chief Minister/Finance Minister/Planning and Resources Minister find it necessary to make such a point about denying it?

The papers of course reported the whole speech dead pan, but Kuching was soon echoing to hoots of laughter:

“He took pride that when he was chief minister CMS never took advantage of their link with him and that the company played its roles like any other entity.

“I shut it out from my life for … until now and I am very happy to see that the management of CMS understands why I have to shut them out because I don’t want any contradictions between my private interest and my duty as Chief Minister before,” he said.

“Today I am very happy to see CMS doing very well without taking advantage of its position and its link with the government,” he elaborated. [Borneo Post]

In the immortal words of the tennis player John McEnroe, Taib cannot be SERIOUS!

Just look at who owns CMS, which Taib happily announced is carrying out so much work on behalf of the state that it has not been necessary to create a public consortium to develop his so-called ‘SCORE master-plan’, into which huge sums of public money are being poured.

Majaharta belongs to Taib’s daughters – so 43% of the public shareholdings belong to Taib’s late wife Lejla and his children – what about the hidden nominee shares which comprise another 38% of the company?

“CMS has taken very bold steps in supporting SCORE and also helped the state government not to resort to creating another corporate government statutory body to ensure that SCORE will be a success!” [Taib boasted at the dinner]

In other words Sarawak’s proxy state development arm, the instrument of its public policy, is none other than a family company owned by the all-powerful Governor, which is getting virtually all the projects.

Going forward also, Adenan Satem has frequently made clear that changing the direction of SCORE is a no-go area for his administration. That was his deal with his oldest friend, Taib Mahmud, when he took office.

So much for integrity pledges.

Contrast Taib’s denials with the advice purportedly given to the federal low-price store initiative Kedai Rakyat 1Malaysia, when it approached the Land & Survey office to look for a site in Kuching. 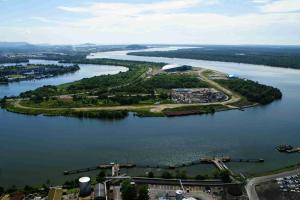 The Isthmus – Taib’s chosen development zone. Handily he has given most of the land in the zone to CMS at rock bottom prices as a ‘payment in kind’ for a past project for the state.

Their best strategy for gaining official approval, the officials advised, was to buy land off CMS and then appoint CMS to build the project!

After all, name any official project recently initiated in Kuching that has not been handed to CMS.

For example, the latest fat projects recently confirmed on behalf of two public outfits on the Kuching Isthmus, the so-called Kuching Gateway Towers.

The SEDC (Sarawak Economic Development Corporation) and LCDA (Land Custody Development Authority) have both been run with an iron fist by Taib for the past three decades.

Now each have kindly commissioned new headquarters buildings off his company at a public cost of RM70million each.

There was no public tender, naturally.

So, did either outfit in fact need a new headquarters in this as yet under-developed part of town?  Not according to the opposition DAP leader Chong Chieng Jen:

On his initial expectations of Adenan, Chong, who is also Bandar Kuching MP and Kota Sentosa assemblyman, said he would like him to scrap the proposed new headquarters for Sarawak SEDC and Land Custody and Development Authority (LCDA) at the Isthmus.

Chong argued there was no necessity to spend RM146 million to build the two structures, as SEDC and LCDA already have their own headquarters.

In addition, he claimed, Wisma Pelita, which is occupied by the Land and Survey Department, was very much underutilised.

“The RM146 million saved can be used for rural electrification to improve the living conditions of the rural people. It can also be used to implement a more effective transportation system in Kuching.” [Borneo Post, March14th 2014]

Clearly, Taib’s priorities have once again tended in favour of benefitting his own family companies, rather than the general public in this matter.

Little wonder he felt the need to assure his anniversary guests that this was not due to any “interest” on his part. 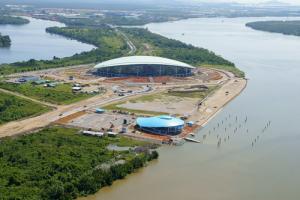 But, before getting on with their unnecessary building projects (sanctioned by their boss Taib) the two state corporations had first to also buy the land – again from none other, of course, than CMS Land Sdn Bhd.

The SEDC paid CMS RM5million an acre for its spot on the Kuching Isthmus.

After all, Taib has handily now designated the area to be the state capital’s premiere development site, with plenty of infrastructure money pouring in to support his drive and boost property prices.

So, CMS named its price and it was all ‘negotiated’ under the auspices of Taib himself, in the weeks before he left office.

No ‘contradictions’ there then.

Doubtless, the sprightly old pirate skipped out of the room while his underlings signed the final contracts, safe in the knowledge that the MACC’s legal advisors would thereby rule that he had not exercised any undue influence over the proceedings!

Readers might ask, how come CMS owns all this land in Kuching’s priority development zone?

The answer is linked to the benefits accruing from over three decades of uninterrupted governing power by a self-serving kleptocrat.

Back in 1996 Taib had handed yet another controversial project to CMS, the so-called Kuching barrage, which was supposed to prevent flooding.

It hasn’t according to many inhabitants.

At that time the company was even more clearly in the hands of Taib’s own family, with his brother Onn as the ‘owner’ of 17% of the shares, which later passed to Taib’s own late wife. 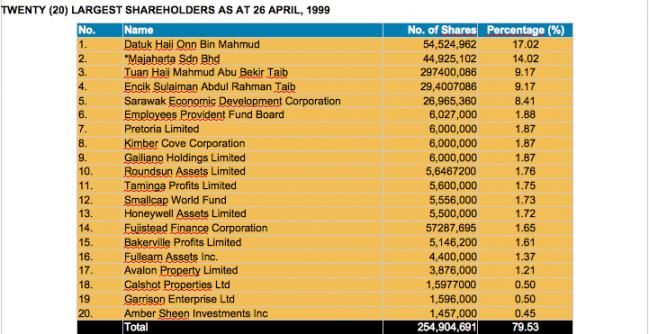 Funny how the shares in CMS have passed around between Taib’s family members.

Yet, despite this “private interest” Taib was happy to hand the project (as usual without any public tender) to CMS for RM150million.

What’s more, he agreed with his cash rich brother and his children that part payment for the project should be ‘in kind’. 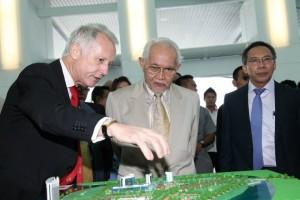 Vast potential for profit when you control the rules of the game – Taib and CMS’s British boss Richard Curtis play monopoly with Kuching’s real estate.

Under the deal he alienated 275 acres of land on Kuching Isthmus from the state.

He then valued it at RM60million, meaning a price per acre of RM218,000 and handed it over to CMS.

The company still had RM90million in cash from the state in order to build the barrage.

A few years later, after the designation of this very area as a ‘special development zone’ by himself, this became the same land that CMS was able to flog on to the SEDC (under a deal overseen by Taib)  for RM5,000,000 per acre!

No mean mark up at 23 times the original price and all determined by Taib’s own decisions in government.

Sarawak Report therefore challenges Taib Mahmud to sue us for saying that he lied to his audience at the 40th Anniversary Celebration of CMS.

This company, which started as a cement producer owned by the state, has grown to its enormous size and wealth under his own family ownership, almost entirely thanks to him “taking advantage” of his position in government. 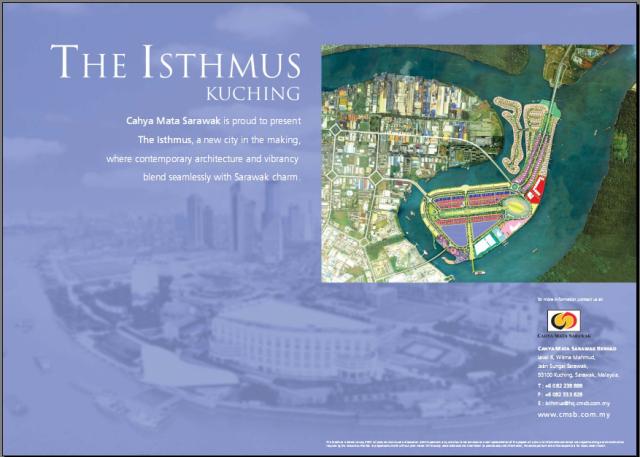 First hand your private family company a chunk of state land, calling it ‘payment in kind’. Then turn that land into a development zone. Then drive all the state institutions you control to buy back the land at inflated prices and finally make those institutions pay your own company to build them projects they don’t need. No conflict of interest?