Murum Manager Was Investigated By MACC Before Sudden Death EXCLUSIVE! 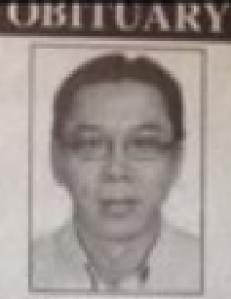 However, The MACC has formally denied the claim.

Frankie Chin died on the night of 12th June after a short illness.

A contact has told Sarawak Report that Chin, who was aged 57, is understood to have died due to heart problems, shortly after returning from leave in Vietnam.

“it certainly wasn’t suicide. He was ill for a short time before he died in his house”

“It is true he was being watched by the MACC. but that happened to all his predecessors too”.

“Frankie was driving a new Mercedes. That led to MACC eyes on him. Heard he couldn’t take it anymore.”

This latest revelation that Sarawak Energy (SEB)’s top technical official, in charge of the construction and safety of the Murum Dam, had been questioned by the anti-corruption authorities, casts further concern over the commissioning of this dam and subsequent safety checks.

Frankie Chin was due to face an audit enquiry at SEB the day after his death and was clearly under pressure following the delivery of a devastating report in March, which pointed to ‘catastrophic’ defects in the turbines which had already been delivered to the dam site. 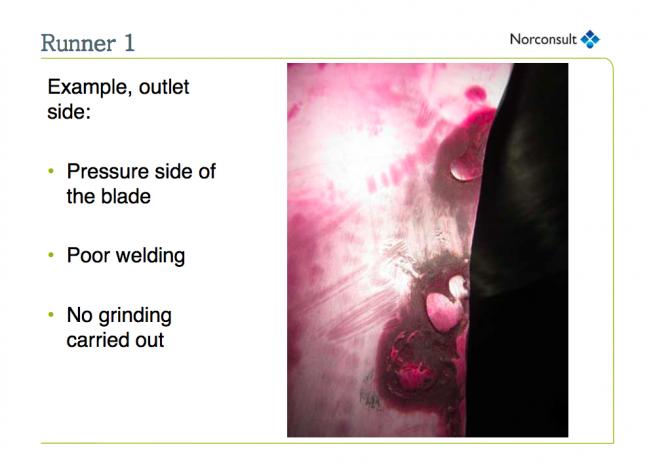 The report, which was obtained by SR, contained a litany of graphic illustrations of the problems with Murum’s turbine blades and runners.

This report was covered up and kept secret by SEB and Sarawak Report has now heard that there are a number of other reports into the quality of the wider construction of the dam, which have been likewise covered up.

Indeed there has been a worrying level of secrecy surrounding the entire project. 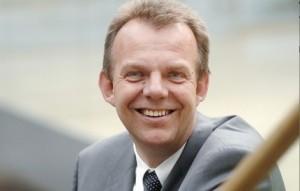 Murum “Completely safe” – CEO Torstein Sjotveit sanctioned the cover-up and the on site repairs and then claimed the turbines were completely safe. He is currently on holiday in Norway.

Another vital document, which ought to have been published is the crucial Environmental Impact Assessment (IEA), which should have been commissioned well in advance of the project and made subject to public consultation before construction was even started.

In fact, the IEA was commissioned long AFTER construction had begun and has subsequently been kept secret, giving the public no opportunity to evaluate the potential damage and risks of this recently completed dam, which was commissioned by SEB from the Chinese state company, Three Gorges Development Company (Malaysia) Sdn Bhd, without any consultation at all.

Meanwhile, the report on the severe defects in the manufacture of the four turbines at the Murum hydro-electric plant, has now been made public, thanks to a leak to Sarawak Report. 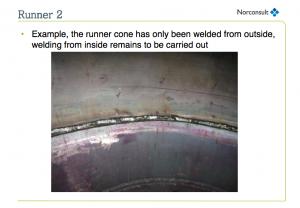 “Very risky” to attempt to repair and re-callibrate such defects on site, according to top dam engineers. SEB went ahead anyway, saving Three Gorges the expense of removing the turbines back to the China workshop.

The report had been presented to SEB by the Norwegian consultancy Norconsult 20th March and Frankie Chin was in the individual in charge, reporting to his boss the CEO Torstein Sjotveit.

Norconsult had concluded that the Murum turbines were so seriously defective that they were “not suitable for installation or operation”.

However, SEB evidently decided to cover up the report and instead to attempt to conduct the sophisticated “repairs” on site, rather than hold up the construction of the dam.

Experts have told Sarawak Report that such a measure is  unheard of in mainstream dam construction and extremely risky.

Concerns about wide-spread bribery of officials over Murum Dam project

According to documents in our possession, Frankie Chin was the key manager at SEB who negotiated on this crisis with the Three Gorges Dam Company and with the company Harbin, which was apparently responsible for manufacturing the turbines.

Given that the decision to attempt to repair the turbines in situ, instead of returning them to the factory, was highly risky, the new evidence that there were concerns on the part of the MACC that Mr Chin may have received unauthorised payments is highly disturbing.

Sources extremely close to the project and to Frankie Chin have told Sarawak Report that Chin was questioned over whether he was receiving bribes from a contractor on the project.

The same sources told Sarawak Report that numerous other staff, including those at extremely senior levels linked to the turbine report have also fallen under strong suspicion over receiving bribes from the same contractor.

Murum turbines due to be tested shortly 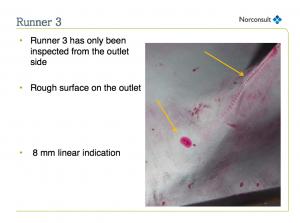 Experts say that it is impossible to confidently re-weld and re-calibrate such defects as on these blades outside the machine shop.

There is now further concern that even the risky and far from certain on site repairs of the Murum turbines may not in fact have been fully carried out, if at all.

The huge secrecy surrounding the construction of the dam, which has been handled by foreign workers and which is sealed off from all public scrutiny, means that no one can be sure what repairs if any have been undertaken.

Meanwhile, testing of the turbines is due to begin shortly, according to our inside information.

This is despite the fact that experts agree that the defective and unfinished blades identified in the report are likely to erode extremely rapidly and sheer off, causing potentially catastrophic damage in a relatively short period.

Such damage would render the dam at best a white elephant project, producing little or none of the promised electricity.  At worst it could threaten lives in the event of an explosive breakage of the turbine casing, as happened in Russia in 2009.

Following our report the MACC denied formally that it has made any investigation into the Murum Dam project: 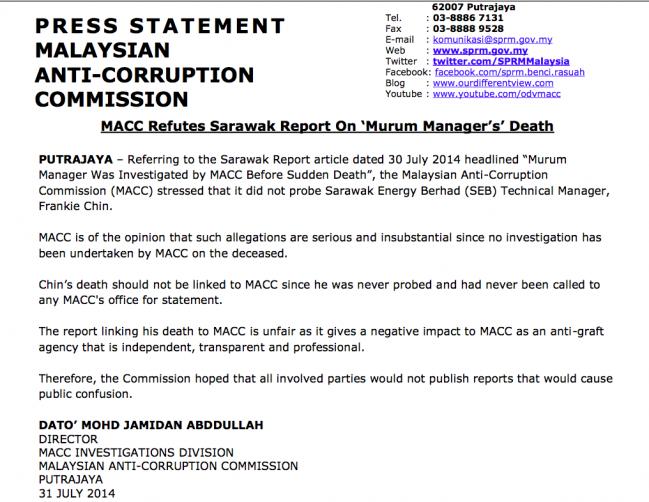