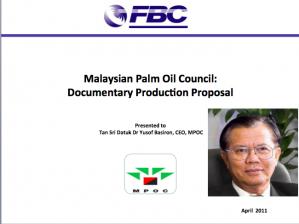 Presented to the CEO of the Malaysian Palm Oil Council – an offer to pay to star in his own TV news documentary!

Sarawak Report has acquired a dossier of damning proposals made by the discredited PR firm, FBC Media, to the government-funded Malaysian Palm Oil Council, for improving the industry’s tarnished image.

It confirms the strategy of ‘greenwash’ to deliberately mislead the world’s public about the true nature of this massive agribusiness, which is tearing up the Borneo Jungle and displacing it inhabitants.

FBC media was charging millions of dollars for these services, which had already been covertly commissioned by other Malaysian government agencies, including Iskandar and Sime Darby, and politicians like Najib Razak and Taib Mahmud.

A Sarawak Report investigation exposed the scandal in 2011, resulting in the disgrace and closure of the UK based FBC Media. However, the links with the MPOC have remained unpublicised till now and reveal further connections between the UK consultant Keith Boyfield and PR drives by the oil palm industry.

Documentary to be “placed” on a top news channel

The contract proposal to the MPOC was presented at a special power point presentation made personally to its CEO Yusof Barison in March 2011.

As part of the deal FBC said it would ‘place’ a crafted documentary about palm oil onto a top world news channel “such as BBC World, Bloomberg, CNBC  or Channel News Asia”, which would include:

The content of the programme would be carefully crafted to favour the position of the MPOC, while pretending to be seeking balanced objectivity:

“To keep the reporting ‘balanced’, we will interview NGOs leveling criticism at the industry, but then getting responses from the key players in palm oil production from countries such as Malaysia” [FBC Power Point Presentation to Yusof Barison]

So-called “third party ambassadors” and “third party champions” were the device that FBC Media commonly used  to give the distorted impression that “independent experts” and “opinion formers” were coming out in support of their high paying clients.

One such “champion” was the US economist Jeffrey Sachs, who was “cultivated” by FBC Media on behalf of Sime Darby.

The company later provided a whopping $500,000 grant to Professor Sachs’ Earth Institute in 2010.

The reason for the PR outfit’s confidence in achieving this “guaranteed” media coverage was that the company was also producing programmes for various top broadcasters, which they were then illegally using as ‘platforms’ for their commercial clients.

This was in conflict with regulations in both the UK and the USA.

Likewise, the BBC commissioned numerous documentaries from FBC for nominal prices, which were then used by FBC media to promote high paying corporate and government clients, including the daughter of the dictator of Uzbekistan, the dictator of Khazakstan, Hosni Mubarak, Azerbaijan and of course a host of Malaysian interests.

For example, a documentary series produced for the BBC for just £1.00 (RM5.00) called “Develop or Die”, blatantly promoted palm oil and attempted to ridicule NGOs, who had raised concerns about human rights and environmental destruction, 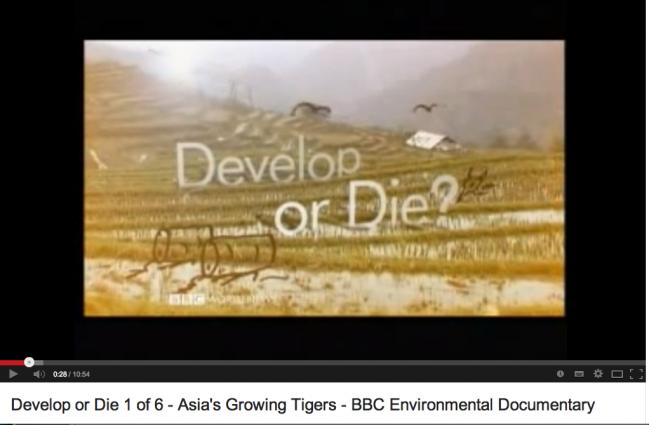 This series was commissioned by the BBC for £1.00. FBC made its money from the subtle promotion of its palm oil clients instead. The scandal resulted in the ending of FBC’s production contracts with the BBC and CNBC.

The FBC Media proposal explains how this PR/ production company planned to use their media outlets to turn public opinion and gain sympathy for the palm oil business.

In particular, they promised to promote the lie that the majority of oil palm is produced by “small farm holders”, instead of vast businesses like Sime Darby, Rimbunan Hijau, IOI and others.

By promoting this untruth FBC explained it would win round “more than 500 million viewers” of its various programmes into supporting an industry, which has in fact grabbed thousands of hectares of Native Customary Lands from their rightful indigenous owners in Sarawak and placed them under the control of BN crony businesses or government schemes like SALCRA and FELDA. 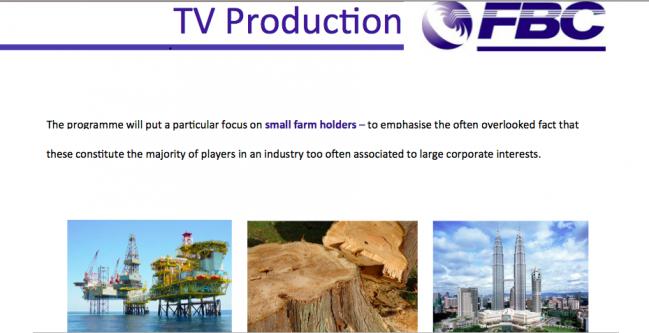 Keith Boyfield at it again!

Keith Boyfield of Boyfield Associates – a company that uses a ‘client’s’ address as its contact.

Astonishingly, the FBC proposal once again planned to rely upon and feature the same Keith Boyfield, whom we exposed earlier this week for being used by the MPOC to promote SALCRA, the MPOC and Alfred Jabu through the British “think tank” the IEA.

In January Boyfield platformed a ‘Discussion Paper” for the IEA supporting Jabu’s management of SALCRA following an MPOC sponsored visit to Sarawak.

This time, FBC Media explained to Yusof Barison that it planned to focus its MPOC media campaign on a separate ‘academic’ paper by Boyfield called “Dispelling the myths: Palm oil and the environmental lobby”.

This ‘briefing paper’ was prepared by Boyfield for the “world renowned” Adam Smith Institute, which is yet another of the considerable number of ‘right wing’/’free market’ ‘think tanks’ of which Mr Boyfield has become a fellow/member.

Mr Boyfield is also a fellow of the ‘free market think tank’ the Institute of Economic Affairs; besides being a ‘senior fellow’ of the Adam Smith Institute and a “research fellow’ of the Centre for Policy Studies.

These outfits are all dedicated to forming public opinion and influencing policy in favour of  ‘capitalist’ interests. But how much do they really understand about Borneo and palm oil, beyond the interests of large corporations in business with Taib Mahmud?

And what genuine claim do these papers have to the credentials of objective, academic research? 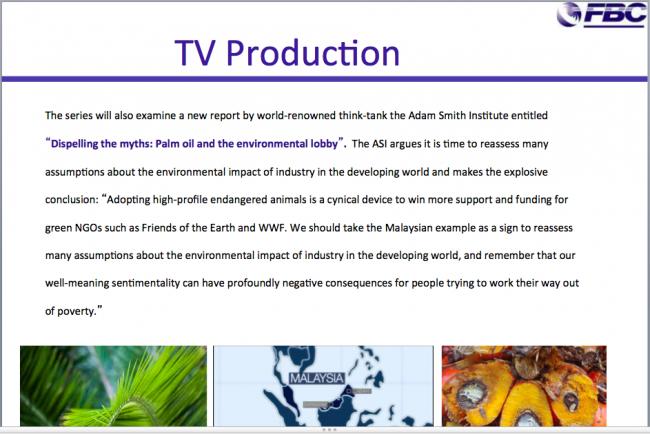 Helpfully pressed into service once more for the MOPC – Keith Boyfield this time writing for the Adam Smith Institute!

FBC stated that Mr Boyfield’s ‘academic paper’ had reached an “explosive conclusion” which they planned to exploit in their documentary. Boyfield’s conclusion was that:

“adopting high-profile endangered animals is a cynical device to win more support and funding for green NGOs.. and well-meaning sentimentality can have profoundly negative consequences for people trying to work their way out of poverty”.[Keith Boyfield – Adam Smith briefing paper]

The corrupt PR company conspired to use this “researched conclusion” to launch its media attack on critics of the oil palm industry, claiming that NGOs are purely raising concerns to make money.

Indeed Mr Boyfield’s four page ‘briefing paper’ for the Adam Smith Institute is remarkably sweeping in its dismissal of widespread concerns by environmentalists, human rights defenders and anti-corruption groups, describing them all as suffering from “an ideological opposition to economic development”.

Voicing such opinions anyone would think he was being paid by the Malaysian oil palm industry! 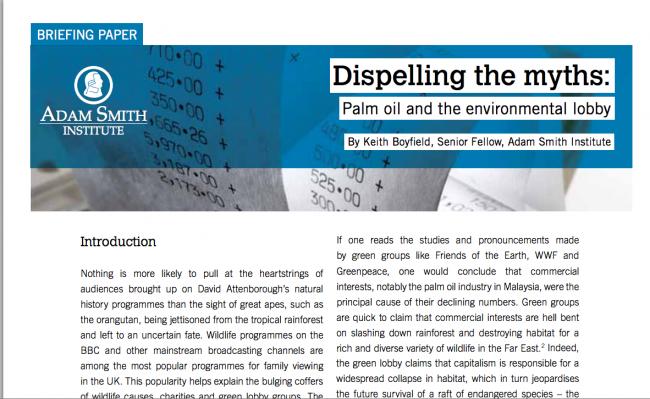 However, Mr Boyfield has assured Sarawak Report that his consultancy was merely invited by the Malaysian Government on two academic one week trips, escorted by the MOPC and that his ‘academic’ papers and briefings were commissioned by the various institutes. 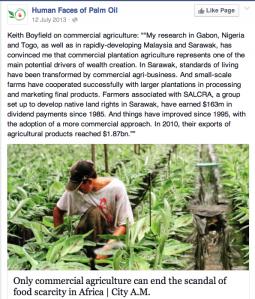 His four page paper for the Adam Smith Institute, which was so eagerly picked up on by FBC and the MPOC reels out a great number of statistics, which would not have taken him long to acquire.

Because they were all provided, according to his own references, by the Malaysian timber council:

“Almost three quarters of the total land area in Malaysia is under tree cover (73.7%), and of this total 56% is natural forest. Out of this abundance of forested area – totalling 18.25 million hectares – almost four fifths (79.6%) is given over to permanent reserved forest, national parks and wildlife sanctuaries”[“Dispelling the myths: Palm oil and the environmental lobby”]

Since these figures are patent nonsense, one wonders why Mr Boyfield did not bother to refer to any of the other extensive body of information available on the subject of deforestation in East Malaysia?

Does he not realise that the bulk of the statistics provided about Sarawak to the Malaysian timber council are supplied by Taib Mahmud’s own companies, which control the export of timber from the state and collect large kickbacks in the process? 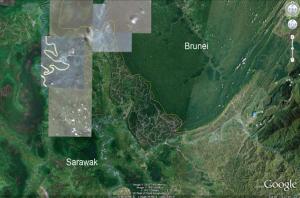 After all. right wing/ free market ‘think tanks” are the first to laugh at election results in communist countries, so why does the same cynicism not apply to highly corrupt dictatorships like Sarawak?

Has Boyfield looked at the satellite information showing the sad story of the destruction of Sarawak’s priceless natural heritage or indeed at the other extensive research on the problem?

If he has failed to conduct this basic research, then on what grounds should people who seek good governance and oppose corruption be subject to blanket accusations of being “ideologically opposed to development” or of “exploiting endangered animals” just to make money?

Since Mr Boyfield is so willing to accuse NGOs of promoting misleading information in order to earn money for private gain, he will not be surprised if others question whether his own consultancy is not itself in the business of manipulating opinion in the guise of research, in return for money? 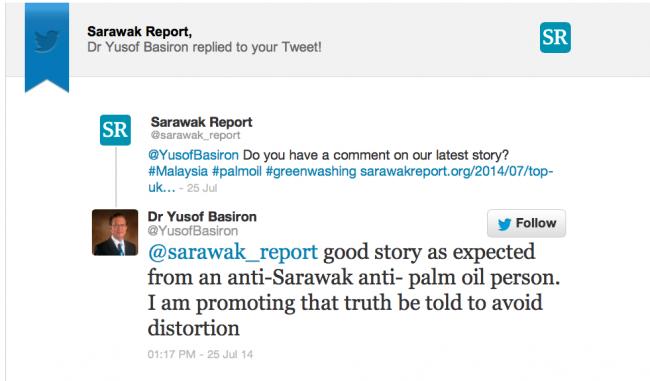 Bad timing? – this sanctimonious tweet by the CEO of the MPOC was received after our last story about its greenwash campaigns – but before our latest expose on the deliberate campaign of distortion on his behalf by FBC Media !