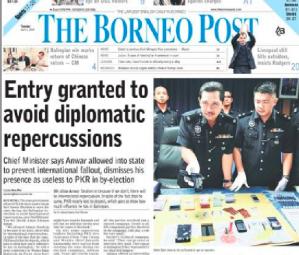 Harder to cover up – the original story remains in the print version!

A major gaffe by Taib’s new puppet Chief Minister Adenan Satem made headlines in the Borneo Post today – and was then promptly pulled down from the online version.

The print version, however, still carries the original wording of Adenan’s highly embarrassing remarks, in which he acknowledged that the only reason he did not ban PKR leader Anwar Ibrahim from the state during the Balingian by-election was to avoid international condemnation.

Satem did nevertheless illegitimately ban no fewer than 8 other leading PKR politicians, who were all  placed on a ‘Watch List’, in order to prevent them from exercising their right to campaign in the constituency.

Meanwhile, Pro-PBB/BN leaders, including Deputy Prime Minister Muhyiddin Yassin, were granted full access to tour the constituency and even more provocatively, the right wing racist agitator Ibrahim Ali was allowed into the state at the very time these legitimate opposition figures were banned.

Yesterday Satem had admitted that he did not dare extend the ban to Anwar, because he was too well-known internationally:

“We allowed Anwar Ibrahim in because if we don’t, there will be international repercussions.” [Adenan Satem as quoted in the original version of the Borneo Post story]

The futile attempt to cover up the gaffe resulted in a re-write of the online story in the PBB controlled Borneo Post. However the story has remained impossible to cover up in the print version and in other online blogs which also attended the press conference. 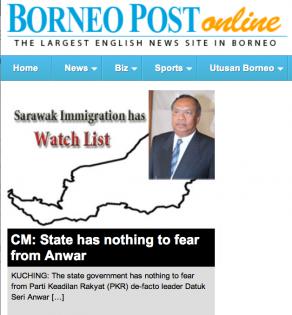 The print version was originally also shown online, but this was soon replaced by an article which re-worded Adenan’s remarks in order to cover up his gaffe.

Keeping out ‘racist bigots’ or preventing free and fair elections?

Satem’s inept treatment of legitimate opposition politicians was totally in keeping with the tactics of his predecessor Taib Mahmud, who has long abused internal immigration controls to bar people who threaten his dictatorial misuse of power. 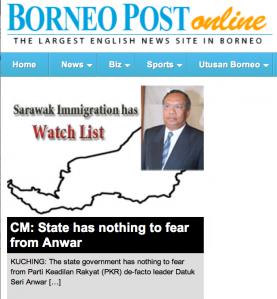 From fear of international repercussions to nothing to fear – the new look Borneo Post lead story online!

It began with an announcement by Satem at the start of the by-election period that he would  “prevent outsiders who are known to be religious bigots, communal racists and trouble-makers from coming into territory”.

That pledge was immediately violated by the open visit of the Malay supremacist Perkasa leader, Ibrahim Ali, whose tour of Kuching was widely reported.

The Immigration Department then tried to issue a statement denying the 3 day visit had taken place, which was immediately disproved by evidence provided by Sarawak Report.

Meanwhile, the ‘troublemakers’ who were in fact selected for deportation by Adenan and his obedient immigration officials were legitimate and peaceful democratic opposition leaders, who seeking to exercise their right to campaign in Balingian.

Boasting at a press conference yesterday about his party’s subsequent win, Satem openly acknowledged these anti-democratic tactics, which came on top of widespread reports that votes were being bought for as little as RM10 by BN in the impoverished constituency.

“We let him [Anwar Ibrahim] in because we are not afraid of him.”……“Whether Ibrahim Ali is in the state or not is not relevant. He might have been in Sarawak and left, but we will find out the next time he comes to Sarawak.” [Adenan Satem’s further remarks to journalists yesterday, as reported in the original Borneo Post story]

The clear calculation admitted by Adenan Satem in his ill-judged remarks, therefore, was that the international community would take less notice of the blatant refusal to allow a free and fair election, as long as the leading figure Anwar Ibrahim was not turned away.

Satem had decided that he could afford one visit from Anwar, so long as the rest of the opposition campaigning was curtailed

How the story was changed

Show elections are not evidence of a genuine democracy. However freedom of the press, which does not exist in Sarawak is.

The hasty removal of the Borneo Post’s original story and its replacement by a completely different reporting of the chief minister’s remarks, shows just how controlled the media is.  But, such moves have only made the matter worse by drawing even more attention to Adenan Satem’s illegal, oppressive and downright stupid tactics.

Compare the opening of the original Borneo Post story:

“We allowed Anwar Ibrahim in because if we don’t, there will be international repercussions…”

CM: State has nothing to fear from Anwar

He slammed accusations that the reason Anwar was allowed into the state was to avoid international repercussions.

“They said we are scared of Anwar, of all sorts of international repercussions if we did not let Anwar in. They have an inflated view of Anwar Ibrahim.

The second version of the story plainly provides a false re-wording of the Borneo Post’s previous quote, as the BN controlled newspaper seeks to cover up for the CM’s gaffe! 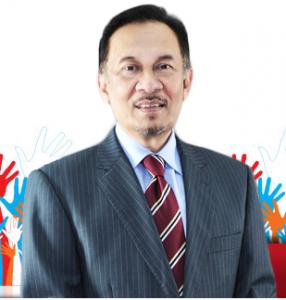 BN’s persecution of Anwar has made him too well known to kick out – is it not time they learnt from their own lessons?

In its re-writing of the CM’s remarks the paper attempts to imply that the CM was scorning somebody else’s remarks about international repercussions, instead of having originally made them himself.

The effect is doubly embarrassing, of course, when the evidence is there for all to see.

The new CM needs to learn better how to abuse his power.  He should realise that a clumsy cover up just makes a mistake look worse and that the disadvantage of blatantly playing dirty in an election is that you cannot legitimately claim you won it.

Sarawak Report will be circulating this matter in a formal protest to embassies across the world in coming days, so that the international community will know exactly how he acted in deliberately obstructing free and fair elections, and why he ‘granted’ Anwar Ibrahim permission to visit Sarawak.