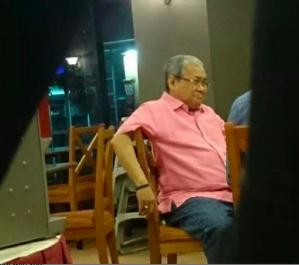 Sarawak Report can demonstrate that the statement by the Immigration Department that the leader of the Malay supremacist group Perkasa did not visit Sarawak last week is untrue.

We have the proof of Ibrahim Ali’s own hand that he was indeed in Sarawak, because he personally signed for drinks and snacks at the Harbour View Hotel in Kuching, where he stayed for two nights in Room 307.

Sarawak Report has received exclusive photos of those receipts

We can confirm that the visit to Kuching last week was arranged in the name Perkasa (which calls itself an NGO) by its Secretary General, Syed Hassan Syed Ali.

Syed Ali booked four rooms under the name of Perkasa at the Harbour View, which costs approximately RM150 a night, for the nights of the 20th and 21st of March.

We have copies of those registrations.

The group then spent several hours drinking and talking till midnight in the hotel restaurant area with members of the group PKMS – Persatuan Kebangsaan Melayu Sarawak (National Association of Sarawak Malays), who reportedly invited the right-wing extremist Perkasa group over to address their organisation. 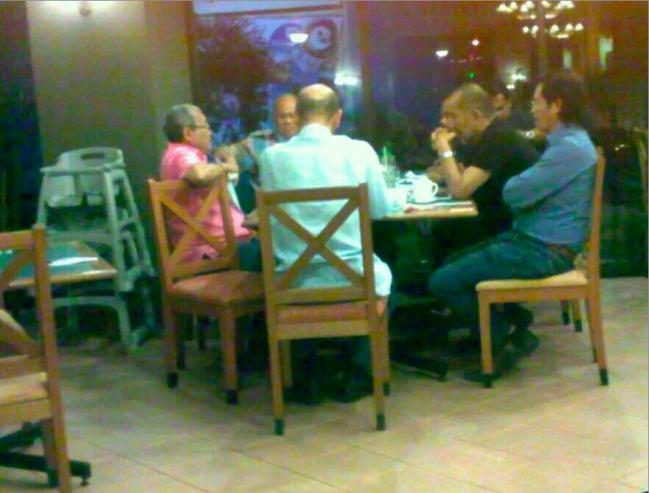 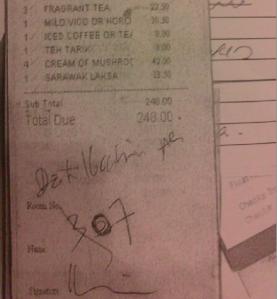 Following outrage over the visit and reports that the Perkasa leader is preparing to launch a new chapter of his notorious, right-wing ‘hate organsation’ in Sarawak, the state Immigration Department yesterday issued a stout denial that he had visited the state.

This misinformation has apparently been backed up by police and special branch and was reported in the local press.

However, we can demonstrate that a carbon copy Ibrahim Ali look-alike was not only sitting in the Harbour View Hotel with Perkasa colleagues on Friday night, but he signed the bill in his own name, proudly using his title Dato’ Ibrahim Ali and citing the number of his room 307 (left).

We also have a copy of his hotel booking which was made out in the name of Perkasa and its Secretary General Syed Hassan Syed Ali.

So, either the entire visit was an extraordinary stunt, complete with false press statements and a highly convincing Ibrahim Ali celebrity look-alike, who signed in his name, or the Sarawak authorities are beginning to look like foolish disseminators of false information. 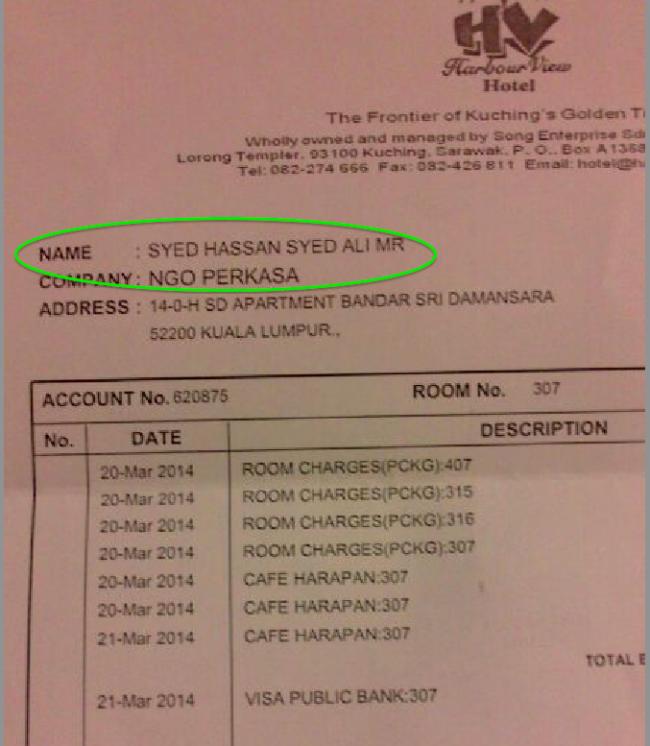 The extremist agitator Ibrahim Ali’s unwanted visit to the state could not have come at a more provocative time, given the extraordinary actions of the state government this week in barring legitimate opposition figures from entering Sarawak. 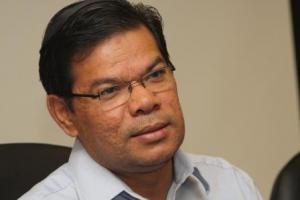 The order to the immigration authorities represents a blatant attempt by the ruling PBB/BN state government to prevent PKR from legally campaigning in the Balingian by-election.

Yesterday, three senior members of PKR Rafizi Ramli, Tian Chua and Saifudden Nasution were all turned away when they arrived from West Malaysia and it has emerged that in all 8 members of PKR, which is fighting the Balingian seat on behalf of the PR opposition alliance, have been blacklisted from Sarawak.

It is a classic abuse of internal border controls by the tin pot dictator, Taib Mahmud, who has regularly banned anyone who he fears might criticise, expose or challenge his stranglehold over Sarawak.

The editor of this blog is likewise barred, along with many others, from legitimately entering the state.

Not only does this mass banishment make a laughing stock of the supposedly ‘democratic’ by-election taking place in Taib’s former state assembly seat in Balingian, it also exposes shocking hypocrisy, given the opposite treatment of the highly provocative extremist Malay supremacist, Ibrahim Ali. 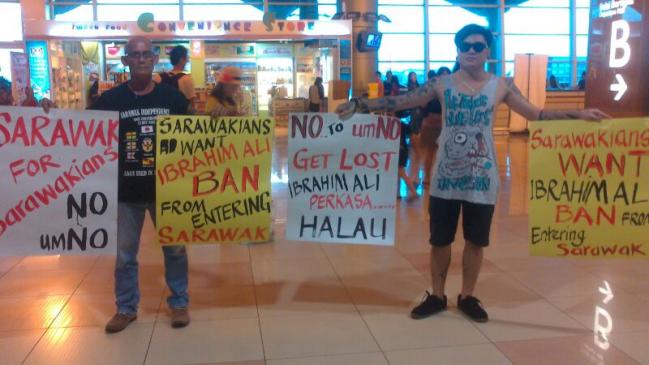 After all, when the puppet chief minister, Adenan Satem, first raised fears in a speech last Saturday of the planned ban against opposition politicians, his public excuse was that he would invoke border controls to keep out ‘bigots’ and ‘divisive elements':

“As a responsible government, we will invoke the immigration power given to us by the Federal Constitution to prevent outsiders who are known to be religious bigots, communal racists and trouble-makers from coming into territory or to deport them if they are already in Sarawak.

“This is to prevent peaceful Sarawakians from being infected by racism and religious bigotry. This is done only in the best interest of the peaceful people of Sarawak, who are known to be hospitable and moderate in their views and actions.” Satem told a bemused audience on the Balingian campaign trail.

Yet it has turned out that it is regular politicians who have been prevented from spreading their peaceful messages, while it is a racist and divisive Malay bigot who has been allowed in and permitted to start organising a base in the state. 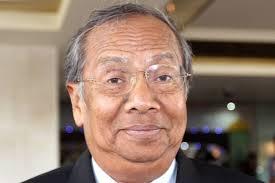 Perhaps it is time that more people in Sarawak understood the lie and realised that Taib and PBB have not kept UMNO out of the state, which is Adenan Satem’s favourite message of this election?

Instead, his party has for all these years acted as UMNO’s active agent in the state, milking Sarawak’s resources for the benefit of West Malaysia’s ruling party and themselves.

And now that the BN/UMNO government has admitted that it is funding Perkasa to threaten its opponents it appears Satem too is allowing this outfit to set up in Sarawak.

Phoney elections in a phoney democracy

So far, Adenan Satem has not had the courage to go the whole way and ban the PKR leader Anwar Ibrahim as well, as was widely anticipated, evidently because of the world attention this would undoubtedly receive.

Instead he has contented himself with crude threats that Anwar should not be “naughty” when he comes, which is the favoured patronising phrase of Satem’s real boss, the Governor Taib Mahmud:

“Sarawak does not need outsiders to interfere on its future direction and to come to the state to create trouble,” he said at a meet-the-people session at the Kampung Teh Hall in Mukah here today.[New Straits Times]

Creating trouble, of course, means upsetting BN’s stranglehold of Sarawak and like all rural elections in Sarawak, this Balingian by-election is phoney. 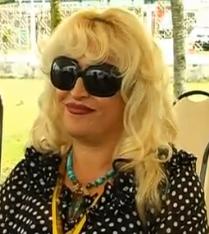 Threats of ‘curses’ brought back memories of Taib’s own ‘witch’ who appeared at the previous Balingian election, 2011

Indeed, Malaysia BN party is now the world’s oldest ‘democratic’ regime, thanks to seats delivered from the rural regions of Sarawak and PBB will spend the 14 days of the paltry ‘campaign’ period abusing the resources and administration of the state to force through its own victory.

Likewise, the refusal to allow the opposition to even present their case in Balingian is all about showing voters ‘who is boss’ and Satem issued threats from the start, informing voters they would be ‘cursed’ if they did not show ‘gratitude’ to Taib Mahmud by voting PBB.

PBB will follow up this ‘show of power’ in coming days by tossing a few meagre ringgit around the village communities and a nice bonus to their salaried headmen, in order to confirm the message they want to convey, which is that “PBB/BN is the boss, so don’t mess with us”.

This has nothing to do with democracy, because in a democracy the people are the boss. Therefore Sarawak is not a democracy.

Balingian is voting in this by-election for a candidate who will sit 16 days a year in the State Assembly. Taib has turned this ‘elected’ body into a farce by reducing its days of operation to two sessions of just 8 days each, most of which are occupied by the opening and closing ceremonies. 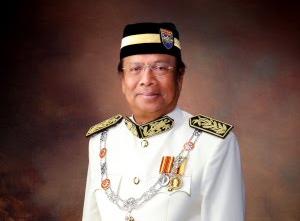 Any assemblyman who asks a proper question, for example about why the majority of the state budget is now secret, is simply removed from the chamber by Taib’s strongmen.

In return for the loss of their representative powers Taib last year kindly trebled the salaries of these cardboard cut-out parliamentarians, who have all agreed to wear uniforms as if they were obedient soldiers rather than independent politicians.

Having silenced the politicians Taib has also silenced the media by the simple method of making it illegal to print, broadcast or join a club or political party without a licence.

No one who is not authorised by Taib can get that licence, which is why not only this blog, but also our sister radio station Radio Free Sarawak are treated as if they were ‘illegal’ in the State of Sarawak.

However, against the standards of international law it is PBB, the State of Sarawak, its Governor and this phoney election that are illegal and the Malaysian Government should be enforcing the legitimate rights of free citizens and their political representatives in the state and not secretly subsidising the likes of extremist groups like Perkasa to enter Sarawak to cause even more trouble for its people.